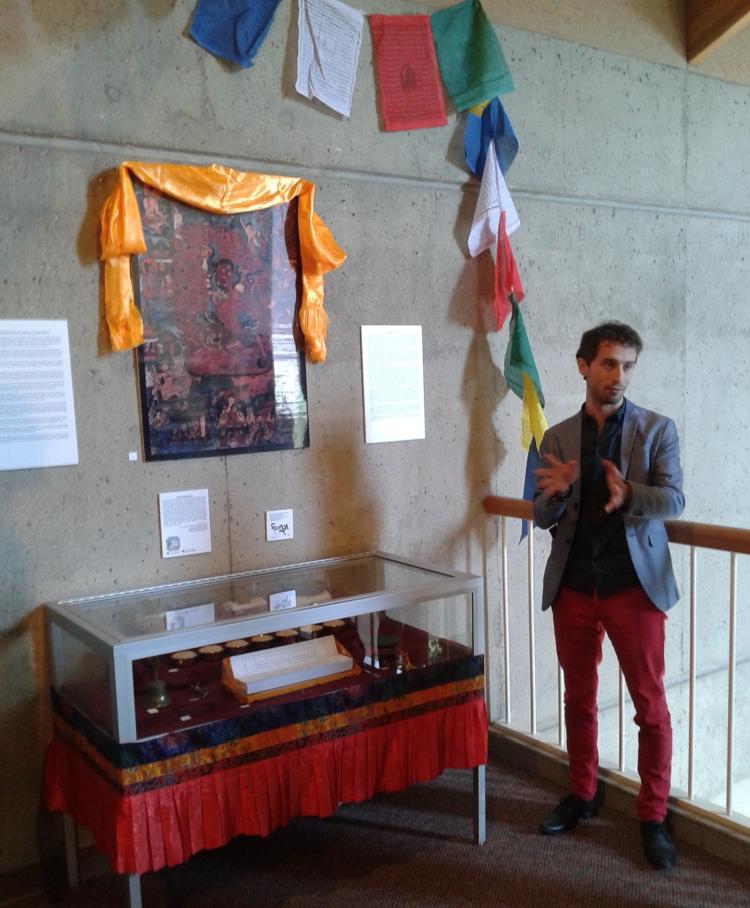 A library exhibit on "Tantric Ritual in Tibetan Buddhism" opened Wednesday, April 12 on the third floor of Norlin Library, next to the entrance to the stacks. It features an image of Dorje Drolö based on a liturgy from the collected works of the contemporary Nyingma master, Dudjom Rinpoche, and an array of ritual implements, displayed as if someone was engaging in the practice. The exhibit provides an inviting glimpse into the world of tantric ritual with explanations of the liturgical context and the individual implements on display.

The exhibit was designed by Eben Yonnetti, MA student in Religious Studies and Provost Fellow for the University Libraries. It celebrates the collaboration between the Tsadra Foundation and CU Boulder, since the ritual featured comes from a recent donation of Tibetan texts by Tsadra to the University Libraries. The exhibit is also timed to amplify a lecture by Jacob Dalton on Monday, April 17th on "Evoking Enlightenment: The Rise of Poetic Language in Early Tantric Ritual."

Thanks to the Tsadra Director of Research, Marcus Perman, for lending many of the ritual implements on display; to the CU Boulder Libraries, the Provost Fellowship, and the Tibet Himalayan Initiative for funding this exhibit; and to the Rubin Museum of Art for granting permission to use the scroll painting image on display.

Read more on this in a featured article in the Colorado A&S Magazine: Student unlocks mysteries of Norlin’s Tibetan Buddhist texts