Dinesh Paudel to speak on "Politics of post-earthquake reconstruction and the early forms of disaster capitalism in Nepal", March 24 at 3:30pm 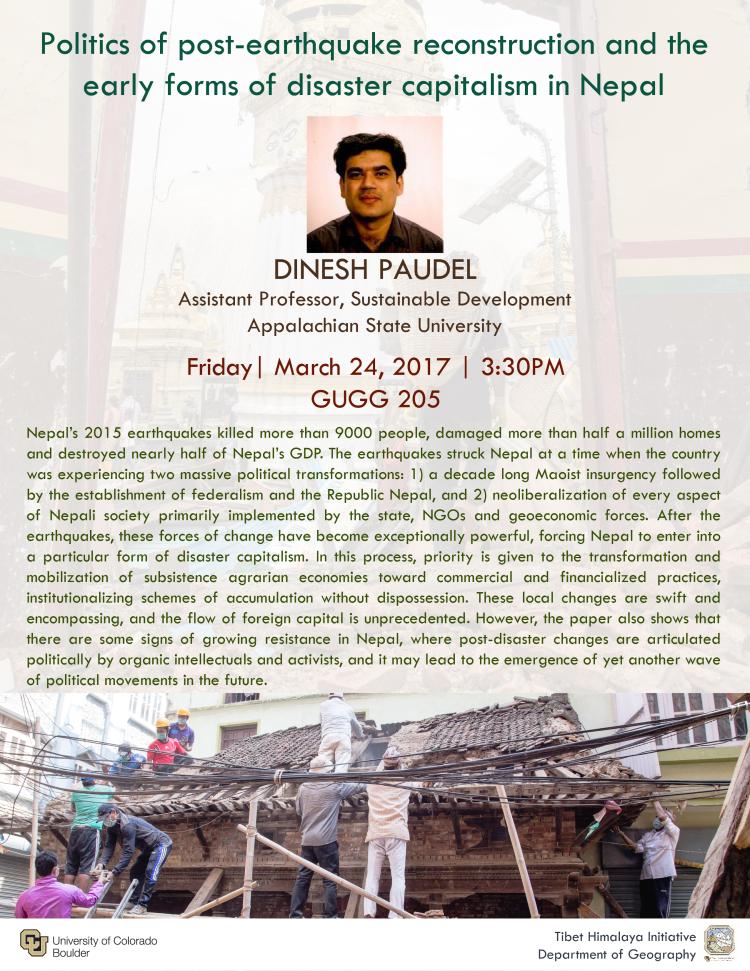 Tibet Himalaya Initiative and CU Boulder Department of Geography are co-hosting Geographer Dinesh Paudel on Friday, March 24 at 3:30pm in Guggenheim 205. Dinesh Paudel is an Assistant Professor in the Sustainable Development Department at Appalachian State University. Before coming to Appalachian, he was a postdoctoral fellow in the Department of Geography at Dartmouth College where he taught courses on Environment and Development, Geographies of Protest and Revolution, and Gender and Development. He received his PhD in Geography from the University of Minnesota in 2012 where he studied the historical connections between international development programs and the rise of Maoist uprisings in Nepal. Broadly, he is interested in understanding how development discourses originate and travel, and how they articulate with economic, ecological and political processes at multiple scales. One of his current research projects focuses in exploring the inherent relationships and complex entanglements between the rising Asian economies, growing environmental degradations and rapidly expanding rebellious politics in South Asia.

Abstract of the talk:
Nepal’s 2015 earthquakes killed more than 9000 people, damaged more than half a million homes and destroyed nearly half of Nepal’s GDP. The earthquakes struck Nepal at a time when the country was experiencing two massive political transformations: 1) a decade long Maoist insurgency followed by the establishment of federalism and the Republic Nepal, and 2) neoliberalization of every aspect of Nepali society primarily implemented by the state, NGOs and geoeconomic forces. After the earthquakes, these forces of change have become exceptionally powerful, forcing Nepal to enter into a particular form of disaster capitalism. In this process, priority is given to the transformation and mobilization of subsistence agrarian economies toward commercial and financialized practices, institutionalizing schemes of accumulation without dispossession. These local changes are swift and encompassing, and the flow of foreign capital is unprecedented. However, the paper also shows that there are some signs of growing resistance in Nepal, where post-disaster changes are articulated politically by organic intellectuals and activists, and it may lead to the emergence of yet another wave of political movements in the future.