Alessandro Rippa to speak on "Curation and the pedagogical state in China’s borderlands", March 21, 11am 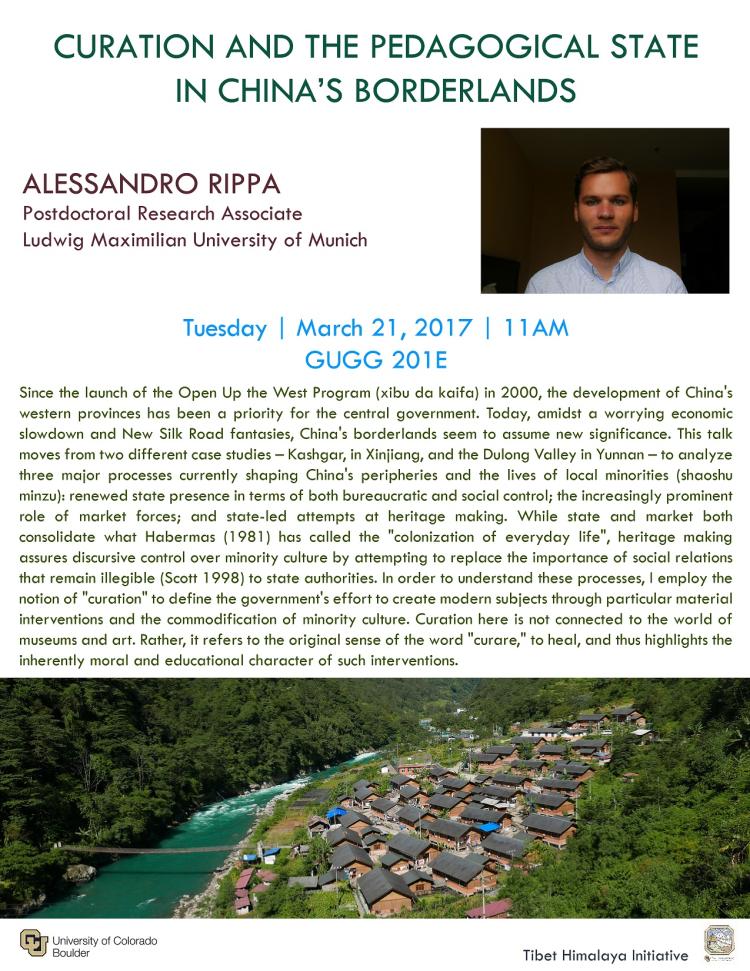 Alessandro Rippa completed his doctorate in Social Anthropology at the University of Aberdeen with a thesis on the Karakoram Highway and China-Pakistan cross-border interactions. He is currently a postdoctoral fellow at LMU Munich, part of the ERC funded project “Remoteness and Connectivity: Highland Asia in the World” (www.highlandasia.net), where he researches infrastructural development, cross-border trade and memory along the China-Myanmar and China-Laos borderlands. Please join us for his talk, "Curation and the pedagogical state in China’s borderlands", on Tuesday, March 21 at 11am in Guggenheim 201E.

Abstract of the talk:
Since the launch of the Open Up the West Program (xibu da kaifa) in 2000, the development of China's western provinces has been a priority for the central government. Today, amidst a worrying economic slowdown and New Silk Road fantasies, China's borderlands seem to assume new significance. This talk moves from two different case studies – Kashgar, in Xinjiang, and the Dulong Valley in Yunnan – to analyze three major processes currently shaping China's peripheries and the lives of local minorities (shaoshu minzu): renewed state presence in terms of both bureaucratic and social control; the increasingly prominent role of market forces; and state-led attempts at heritage making. While state and market both consolidate what Habermas (1981) has called the "colonization of everyday life", heritage making assures discursive control over minority culture by attempting to replace the importance of social relations that remain illegible (Scott 1998) to state authorities. In order to understand these processes, I employ the notion of "curation" to define the government's effort to create modern subjects through particular material interventions and the commodification of minority culture. Curation here is not connected to the world of museums and art. Rather, it refers to the original sense of the word "curare," to heal, and thus highlights the inherently moral and educational character of such interventions.