Sienna Craig to speak on "At the Threshold of this Life: Marriage, Family, and Migration between Nepal and New York," Nov 4 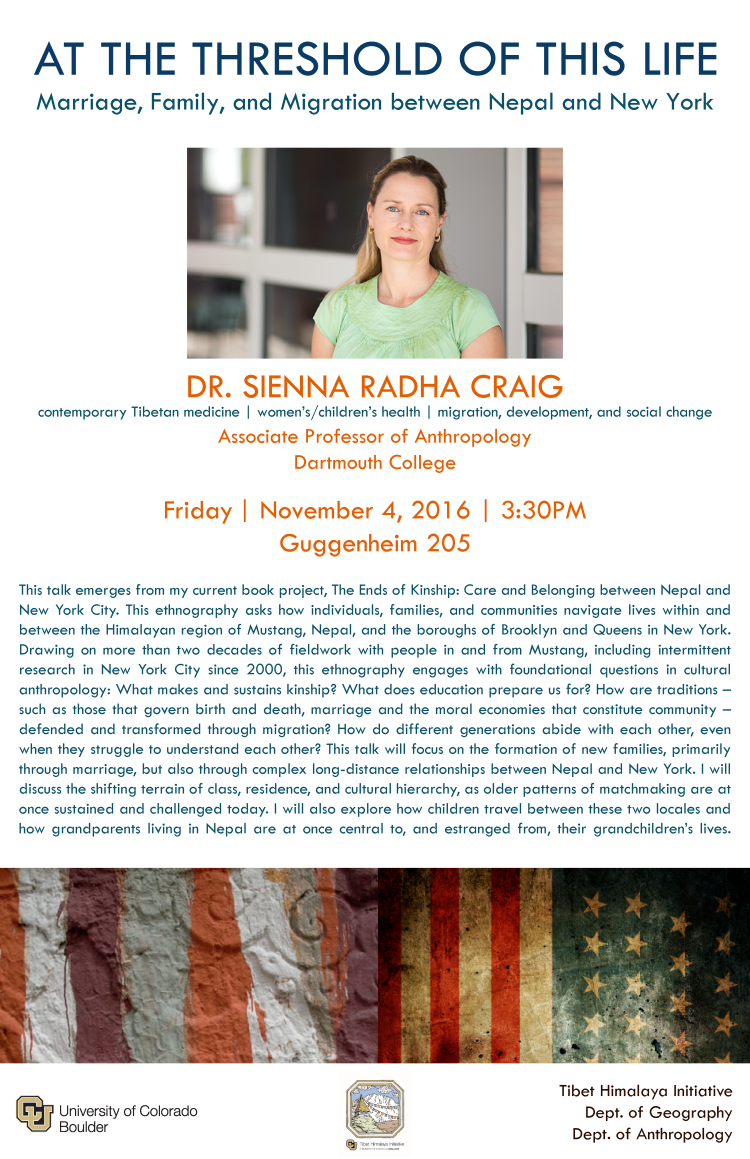 Sienna Craig is a cultural anthropologist, whose major focus in research, writing, and teaching is the social study of medicine. Her work is invested in understanding the multiple ways that so-called ‘traditional’ medical systems interact with biomedicine: from patient-healer relationships and the cultural meanings people ascribe to suffering and affliction; to the wider socioeconomic and political circumstances in which medical practitioners are trained, healing occurs, and medicines are produced, evaluated, and distributed. Over the past ten years, much of her current research and writing projects investigate contemporary Tibetan medicine, both in Nepal and Tibetan areas of China and as a globalizing “complementary and alternative” medicine. She has also conducted research on women’s and children’s health, migration and social change, and the impacts and politics of health-development interventions. Sienna is the author of Healing Elements: Efficacy and the Social Ecologies of Tibetan Medicine (2012). Sienna is also the co-founder of DROKPA, a non-profit organization whose mission is to partner with pastoral communities in the Himalaya and Central Asia to implement grassroots development and catalyze social entrepreneurship

Sienna'a talk emerges from her current book project, The Ends of Kinship: Care and Belonging between Nepal and New York City. This ethnography asks how individuals, families, and communities navigate lives within and between the Himalayan region of Mustang, Nepal, and the boroughs of Brooklyn and Queens in New York. Drawing on more than two decades of fieldwork with people in and from Mustang, including intermittent research in New York City since 2000, this ethnography engages with foundational questions in cultural anthropology: What makes and sustains kinship? What does education prepare us for? How are traditions – such as those that govern birth and death, marriage and the moral economies that constitute community – defended and transformed through migration? How do different generations abide with each other, even when they struggle to understand each other? This talk will focus on the formation of new families, primarily through marriage, but also through complex long-distance relationships between Nepal and New York. Sienna will discuss the shifting terrain of class, residence, and cultural hierarchy, as older patterns of matchmaking are at once sustained and challenged today. She will also explore how children travel between these two locales and how grandparents living in Nepal are at once central to, and estranged from, their grandchildren’s lives.