Traditional Bhutanese art—and the artists who created it—has remained markedly understudied in comparison to that of neighboring Tibet, Nepal, and India.  To the field of Himalayan art history as a whole, Bhutanese art has often been treated as a comparatively static offshoot of Tibetan art. Yet Bhutan’s monasteries, community temples, museums, and private collections hold remarkable works that attest to the development and diffusion of distinct iconographies, painting traditions and workshops.

This photo essay documents research on precisely this body of material, spanning mural paintings, sculptures, thangkas, ritual items, and in some cases, relics from the artists themselves. The project, Historical Artists of Bhutan, is a collaborative effort between Dr. Yonten Dargye of the National Library and Archives and myself.  Study began in earnest in 2013, with fieldwork most recently supported by an International Collaborative Research Grant awarded by the American Academy of Religion. These images share some of the discoveries we made at ten sites in western and central Bhutan during summer 2015.

A key figure in the development and transformation of Bhutanese art was Tsang Khenchen Palden Gyatso (1610-1684). Tsang Khenchen followed the Tenth Karmapa Choying Dorje into exile in Bhutan ca. 1645 and stayed in the region at the behest of Zhabdrung Ngawang Namgyal (1594-1651), who was in the midst of consolidating the nascent nation. Tsang Khenchen, and the students he trained in western Bhutan, constitutes the foundation of what can be termed ‘Bhutanese’ art on a national scale. Surviving works from Tsang Khenchen and his atelier constitute the core of this study, which at its conclusion, plans to offer abundant evidence of the ways Bhutanese art evolved and adapted to fit the needs of new leadership in 17th century Bhutan, and how the resulting works cultivated and disseminated a distinctly ‘Bhutanese’ identity amongst the populace. 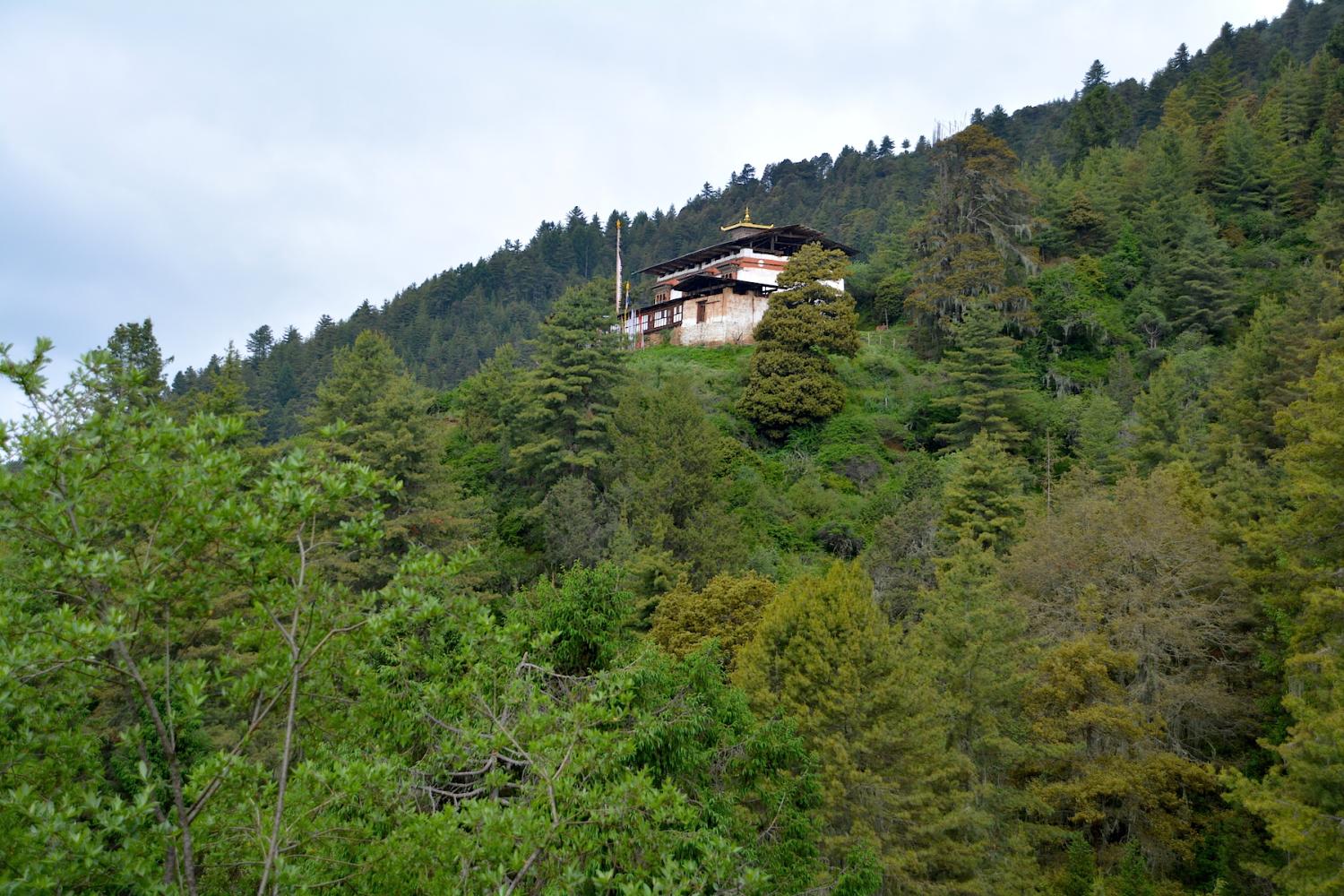 Most of the temples and monasteries we visited required uphill hikes of between 1-5 hours, though rough roads directly serviced a few.  This verdant view is typical of Bhutan during monsoon season. 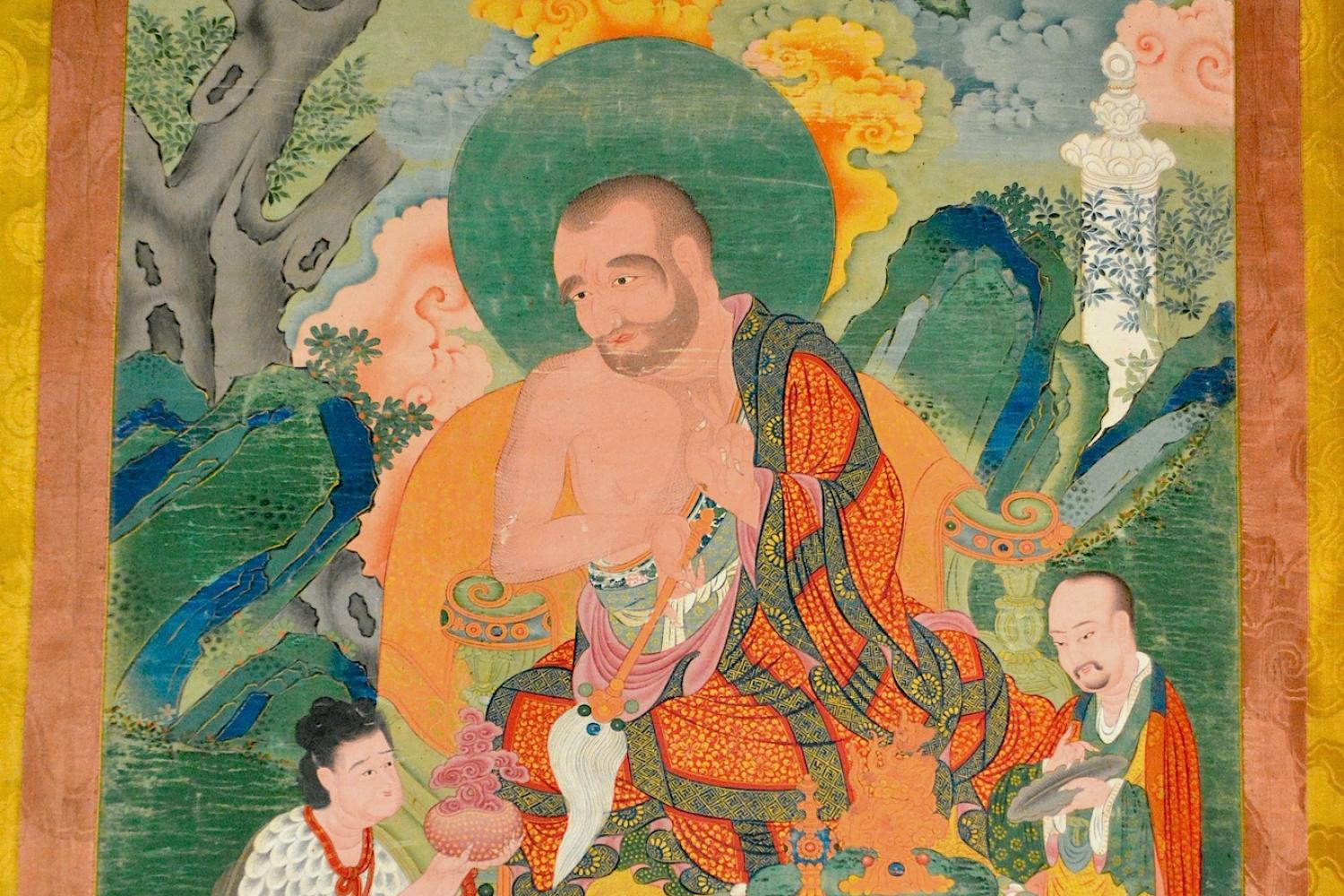 The arhat Vanavasin is depicted here, one composition from a set of thangkas that depicted a number of unusual stylistic characteristics, noted most easily in the marked curvilinear and billowing pastel clouds emerging behind the main figure.  Many components of this composition were clearly adapted from Chinese sources, although executed with distinctive results. 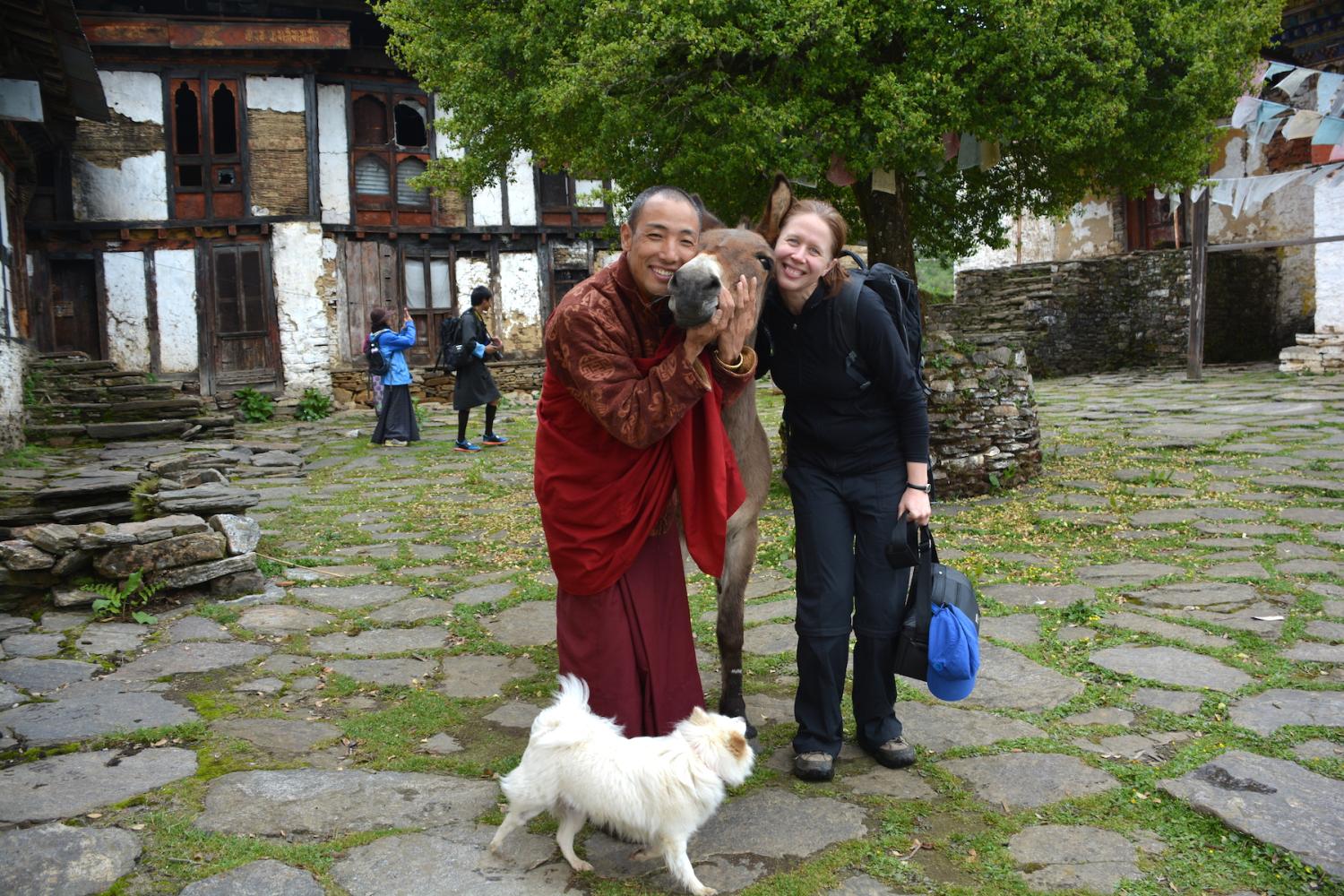 A warm welcome from longtime friend Lama Namgay Tenzin and his menagerie on our arrival at Phajoding, a blessed relief after gaining 1390 meters (4560’). With an average of five or more hours of hiking per excursion, our standard stay in any given temple was roughly six hours, during which time we documented as many murals and thangkas as possible, interviewed caretakers and resident lamas and monks, and studied texts and relics on site.  We were continually humbled by—and grateful for—our hosts’ generosity, patience and kindness. 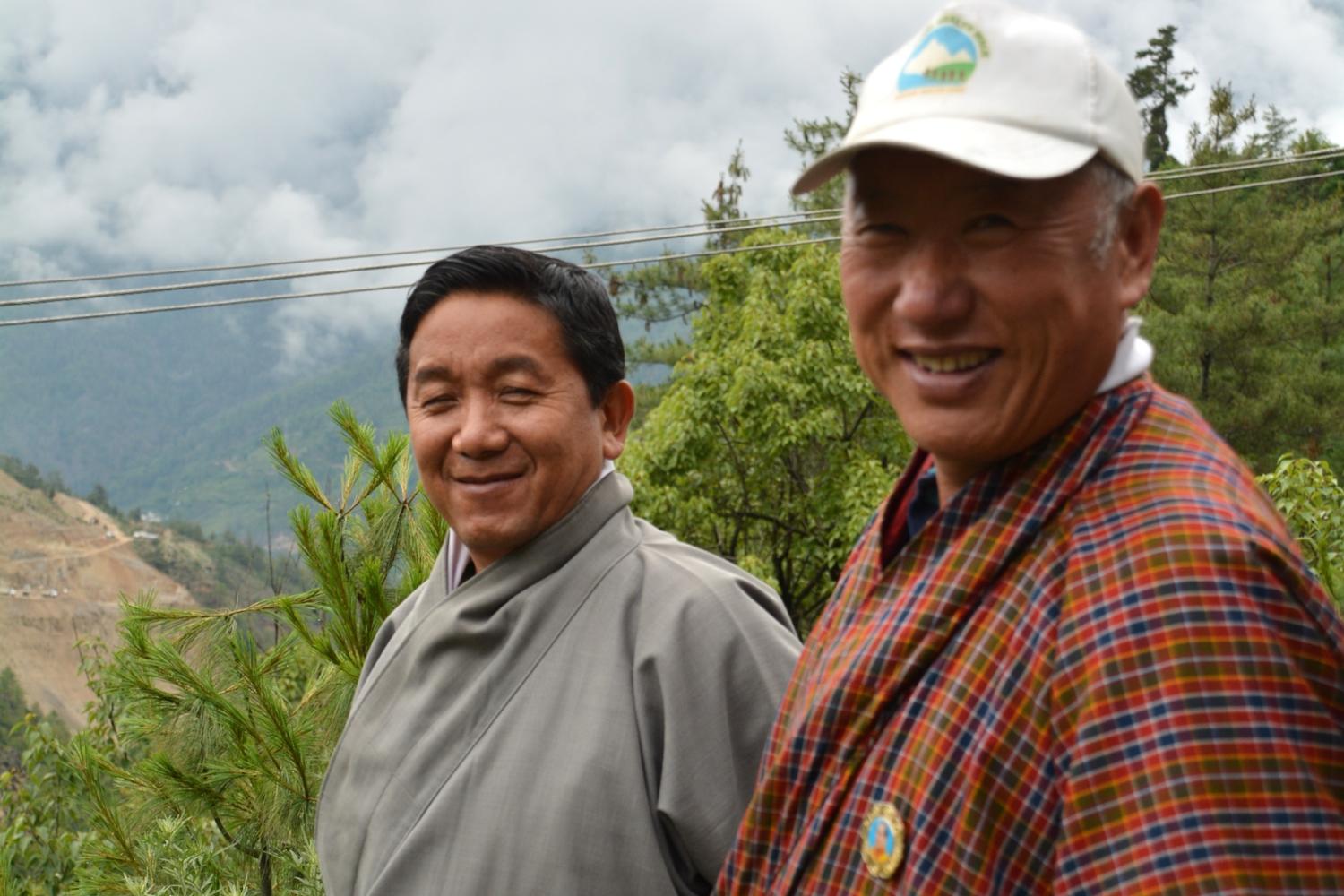 At a few sites, Dr. Dargye (left) and I had the privilege of the company of Lopen Kunzang Thinley (right), one of the most well-versed and prodigious scholars of Bhutanese history and culture.  His presence contributed greatly to our experiences. 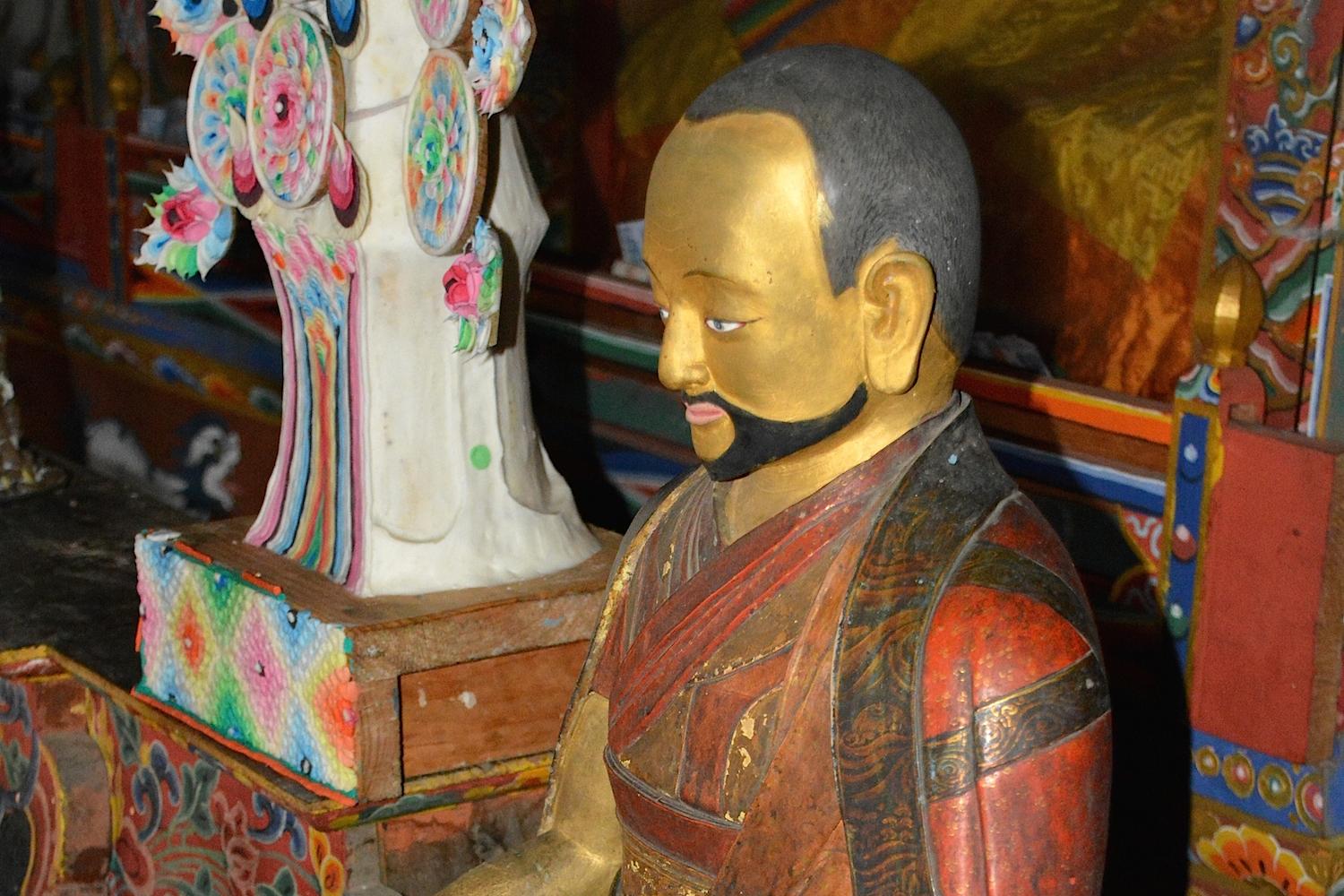 A sculpture of one of the many artistic masters we encountered during our research, with offerings of money left by devotees. 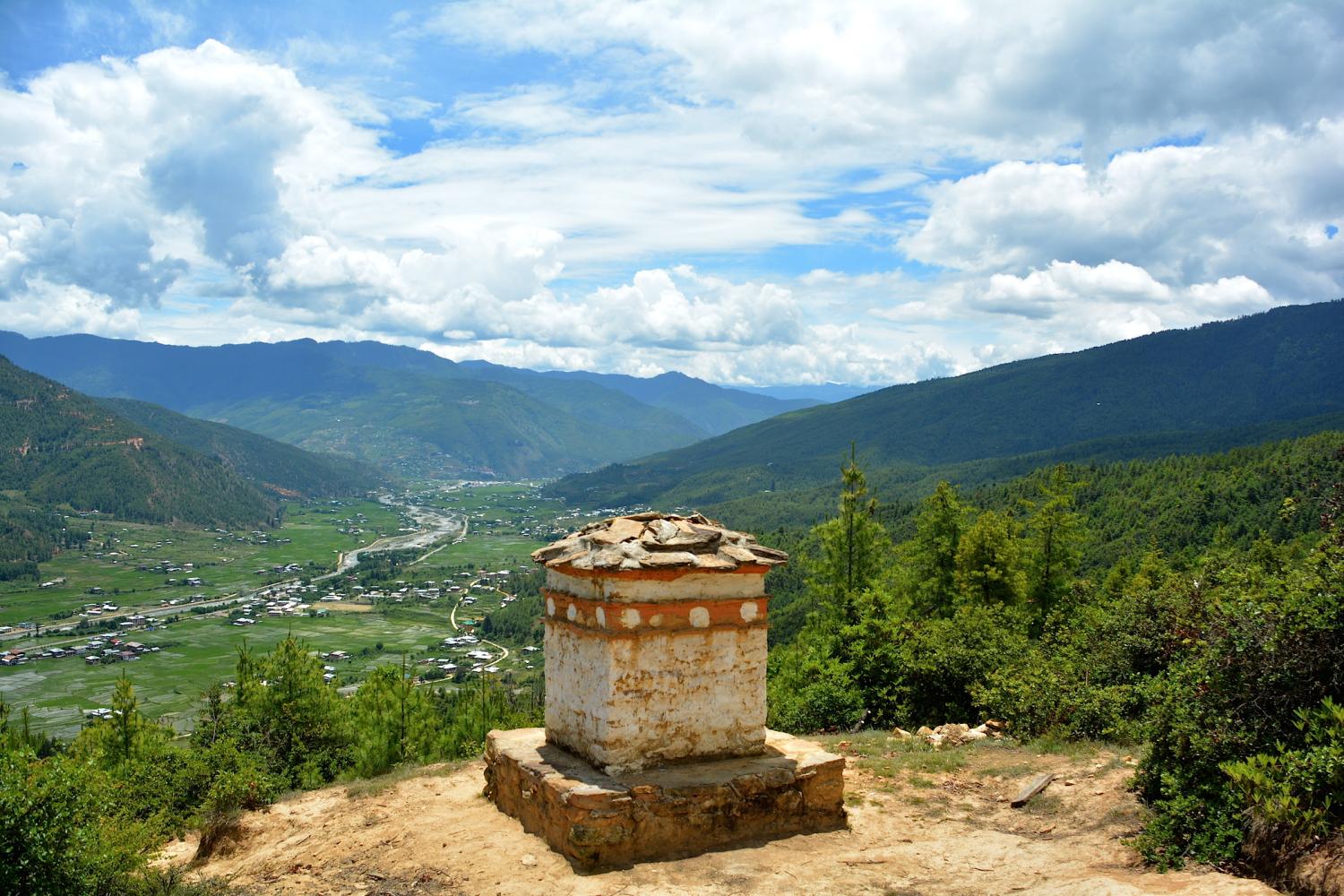 A view of Paro Valley looking toward the south as we made our way up the hillside, with a characteristic square-shaped Bhutanese stupa in the foreground. 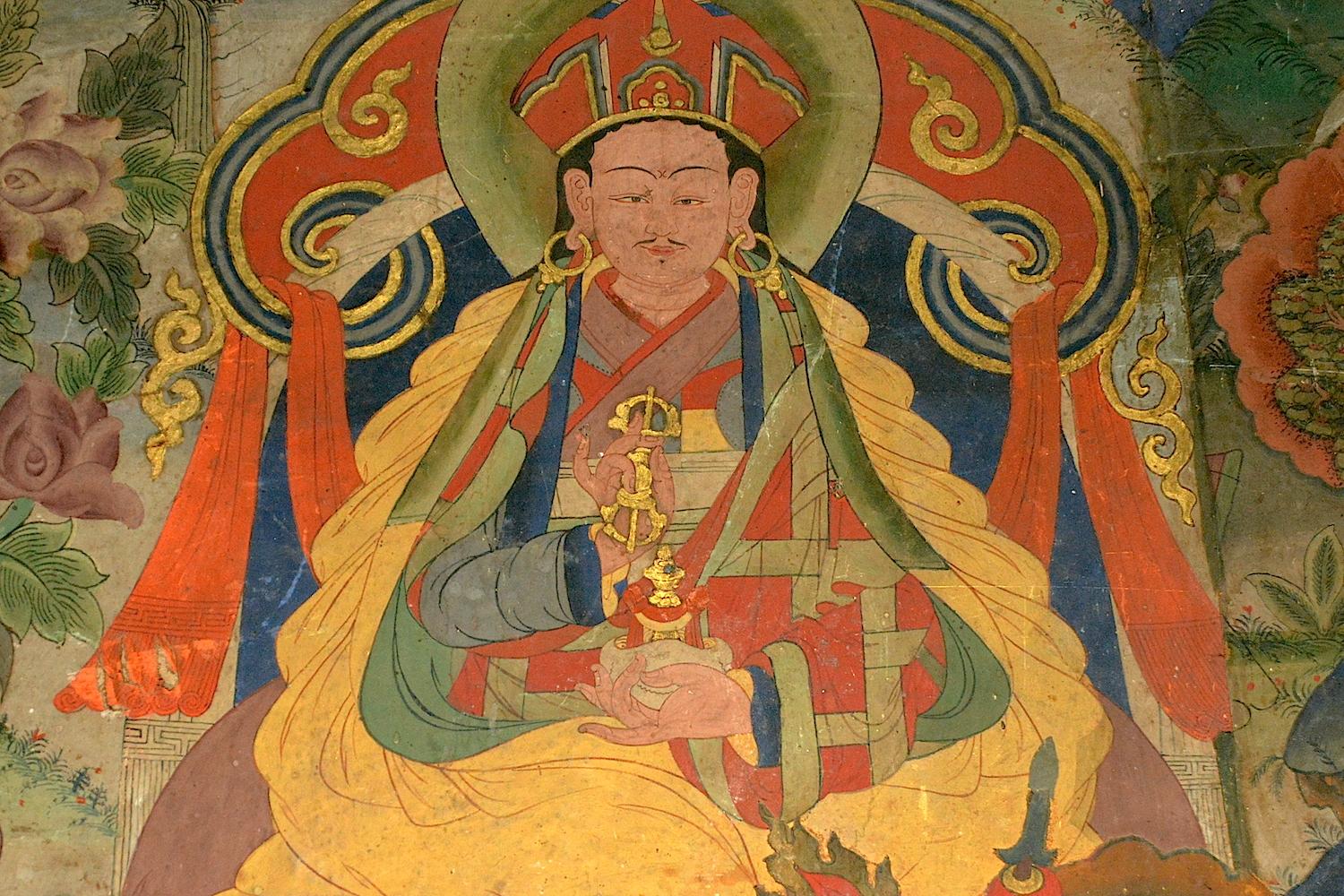 A detail of a wall mural of the Fourth Zhabdrung Thugtrul, Ngawang Jigme Norbu (1831-61). 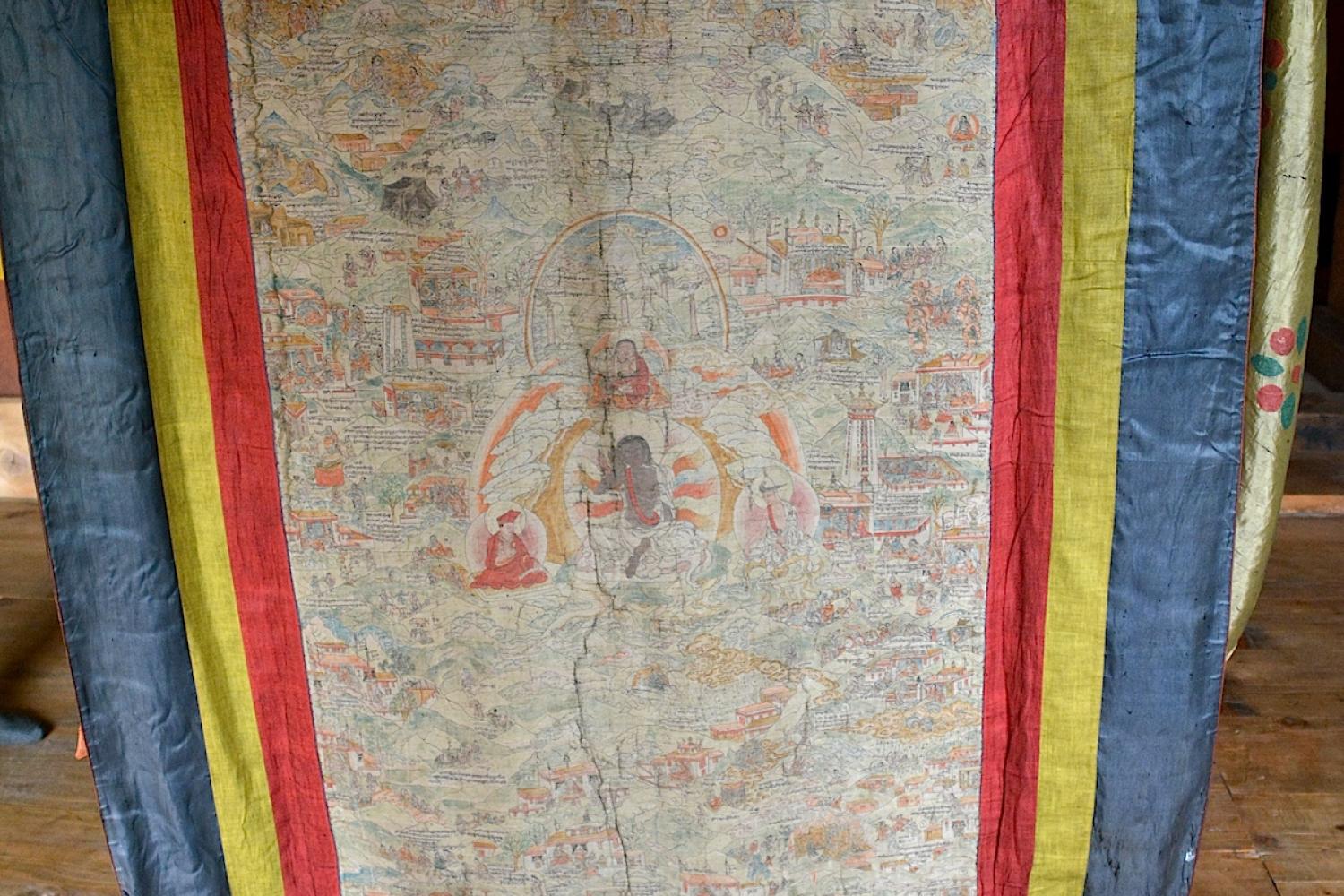 A remarkable and unusual large format thangka depicting scenes from the life of the Buddhist master Milarepa (1040-1123). 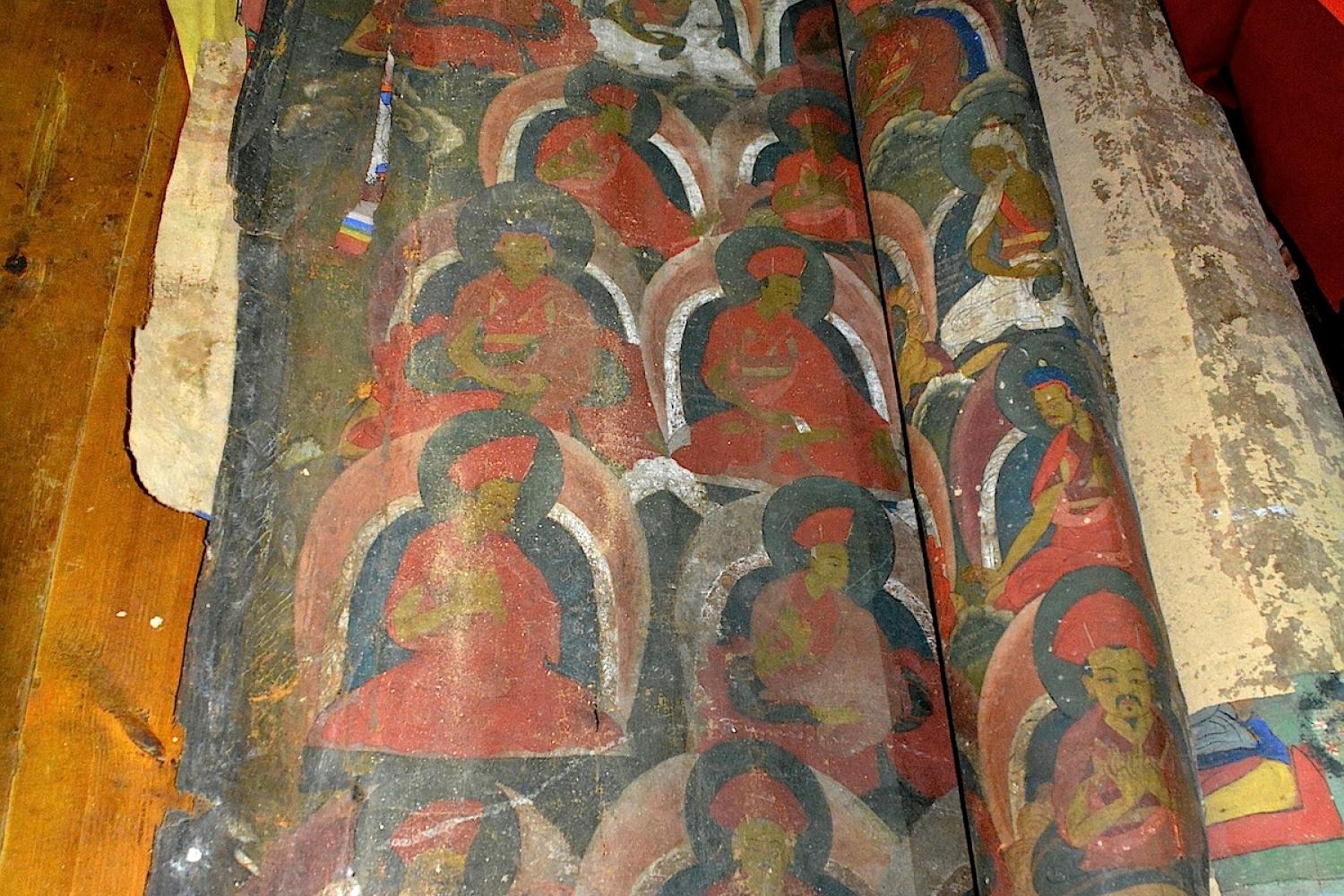 One site in particular was undergoing extensive renovations. Though we had feared the wall paintings had been destroyed, after speaking with the resident lama for some time, he revealed to us that the canvas murals had in fact been taken down and carefully stored for the duration of the project. 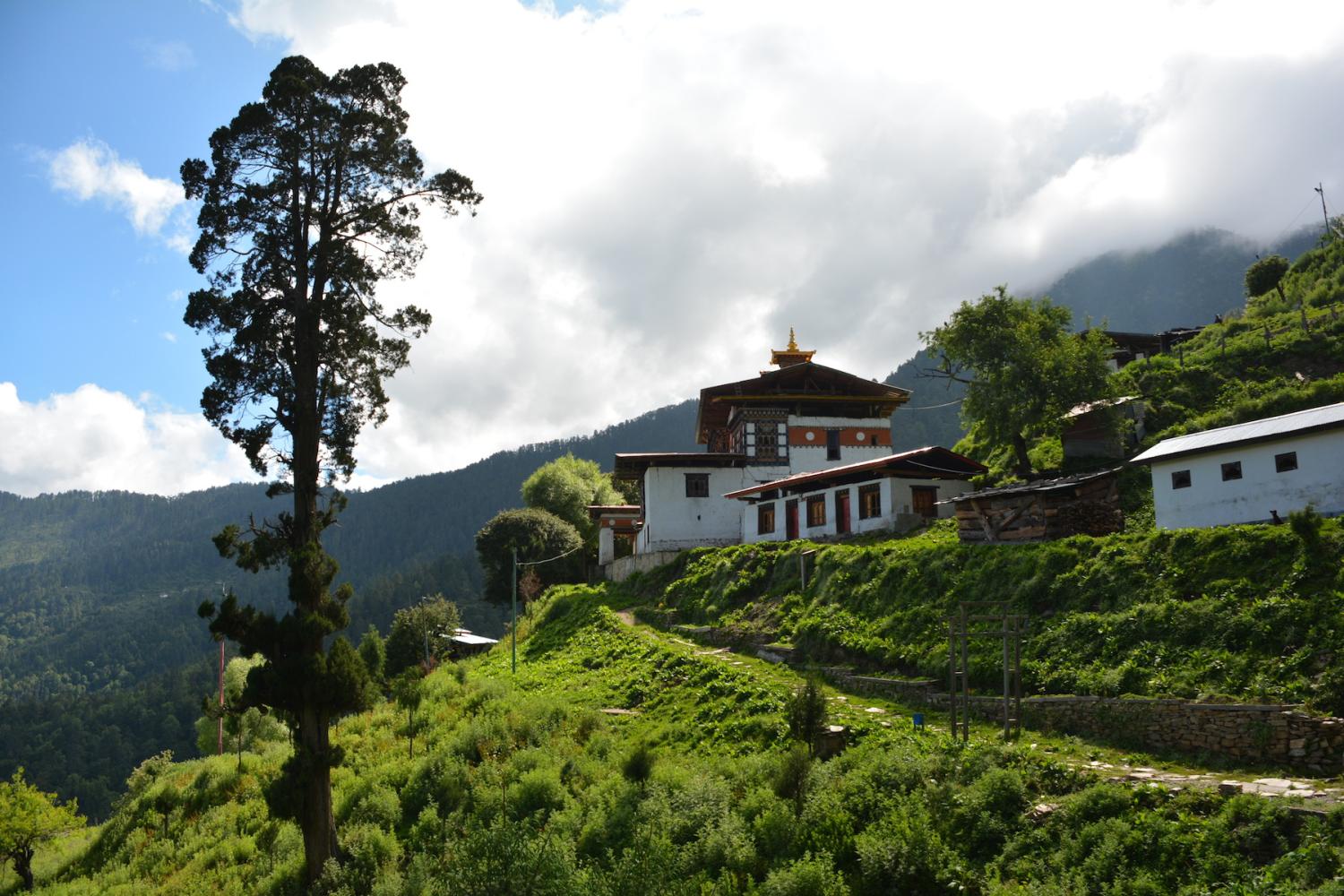 Increased interest in pilgrimage to lesser-visited sites of importance has spurred the construction of ‘rough roads’. This was the last site we visited in Paro and had arrived expecting a 2-3 hour hike; instead, we rejoiced when we learned we could drive up nearly to the front gate thanks to the new road and the sun that had dried the copious amounts of monsoonal mud. 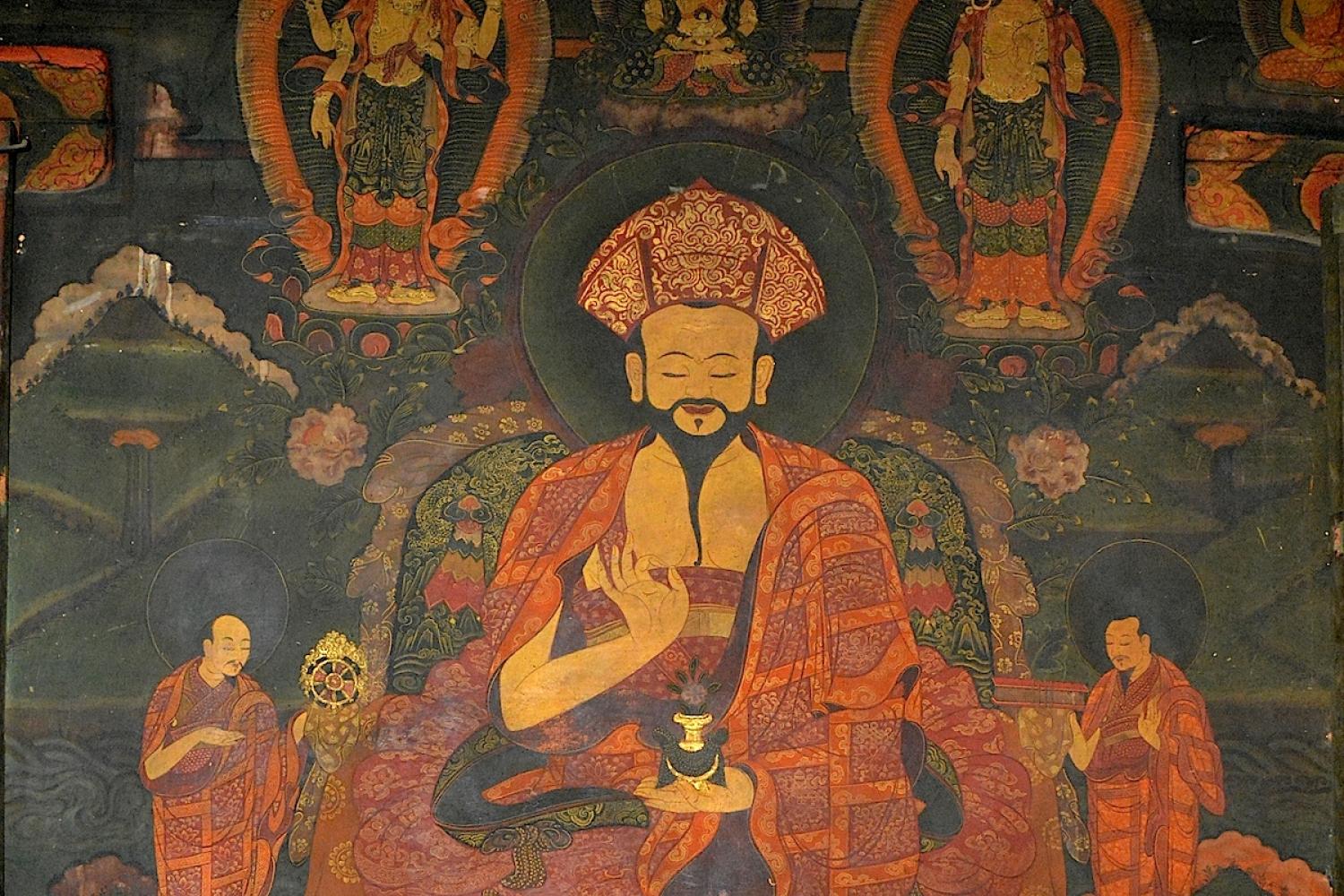 An 18th century mural of Zhabdrung Ngawang Namgyal (1594-1651), considered the ‘founding father’ of Bhutan. Surrounding him are his two attendants, while above are two manifestations of the bodhisattva of compassion, Avalokiteshvara, and the Buddha of long life, Amitayus. Below are two forms of Tara, and a Drukpa Kagyu lama.