Climate change is expected to express itself in South Asia in numerous ways, including through an increasingly unpredictable and more intense monsoon. Already, floods triggered by relentless rainfall, associated landslides, and the failure of man-made dams, account for a greater proportion of deaths and damages than any other natural disaster in the Himalaya.

Rajapur, an island that sits between two flood-prone arms of western Nepal’s Karnali River just a few miles above the Indian border, is no exception to this trend. In August of 2014, an unprecedented flood struck Nepal’s Bardiya and Darchula districts, claiming 100 lives, destroying over 14,500 homes, and displacing nearly 80,000 people. While many individuals have still not directly received assistance in recovery, the Nepali government has responded by initiating a multi-year river training project to embank over 40 kilometers of the Karnali’s bed. Non-governmental organizations have also funded interventions in the region, including an early warning system that relays river level and rainfall data from an upstream gauging station to vulnerable communities downstream via mobile phone. This network, which serves 52,000 people in Nepal’s lower Karnali basin alone, is also being extended across the border into India to support rural communities living on the margins of Uttar Pradesh.

These photos, taken during fieldwork for my Master’s thesis in July 2015, document the impacts of inundation in the Kanali River Basin and the creative ways people have adapted to live with floods. While both embankments and early warning systems each have a role to play in mitigating the impacts of flooding, they certainly do not solve everything. My goal then—in both this essay and my broader project—is to identify the places where people remain very much on their own in adapting to floods, while also seeking to understand the complicated ways in which the impacts of climate change and development become entangled in a specific place. 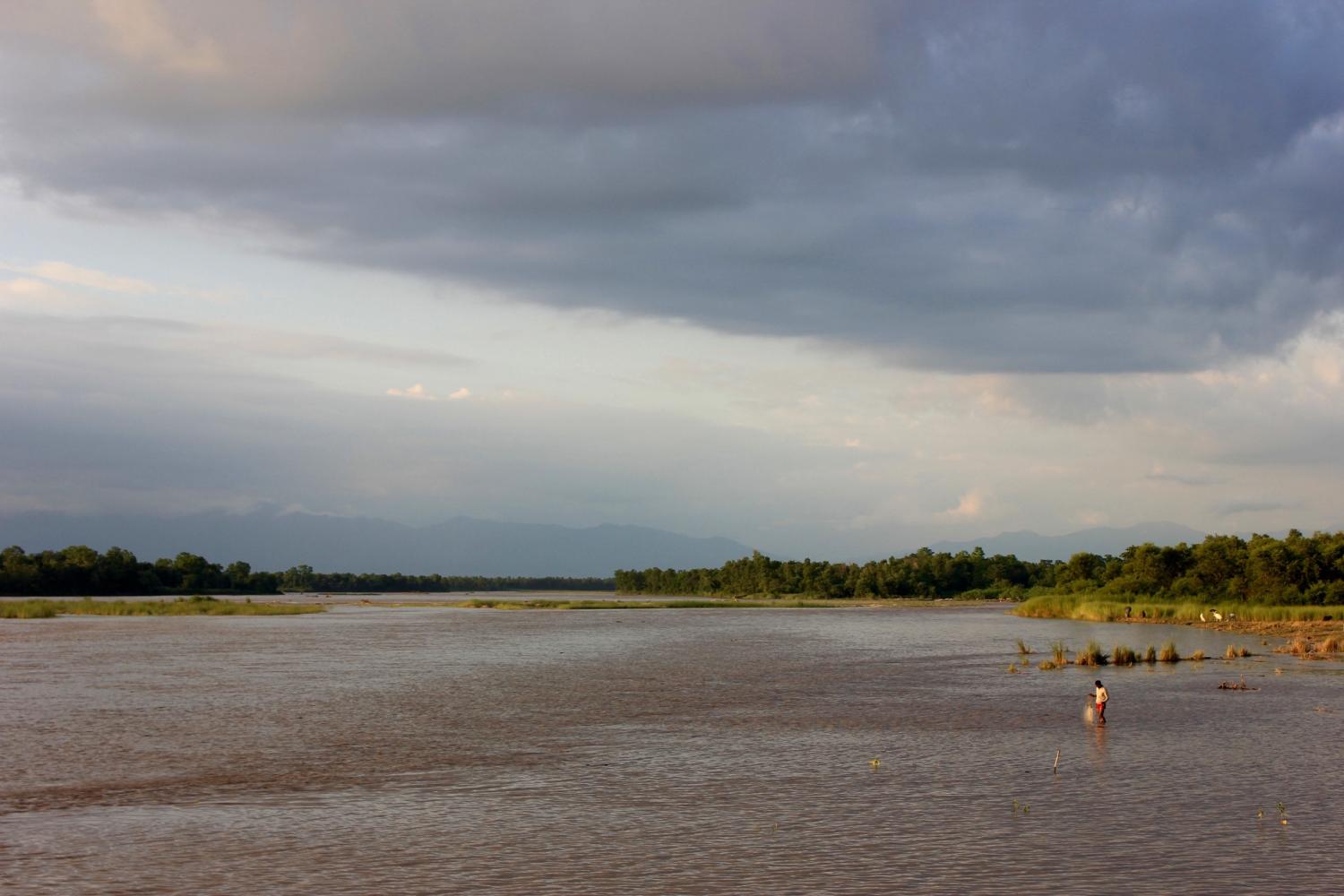 The Karnali River originates in the snowy reaches of Mount Kailash and enters the Himalayan foothills after plummeting 10,000 vertical feet out of Tibet. Here, the river splits upon entering the alluvial plains of the Terai opening up into braided channels that deposit rich soils onto the floodplains of northern India and southern Nepal. 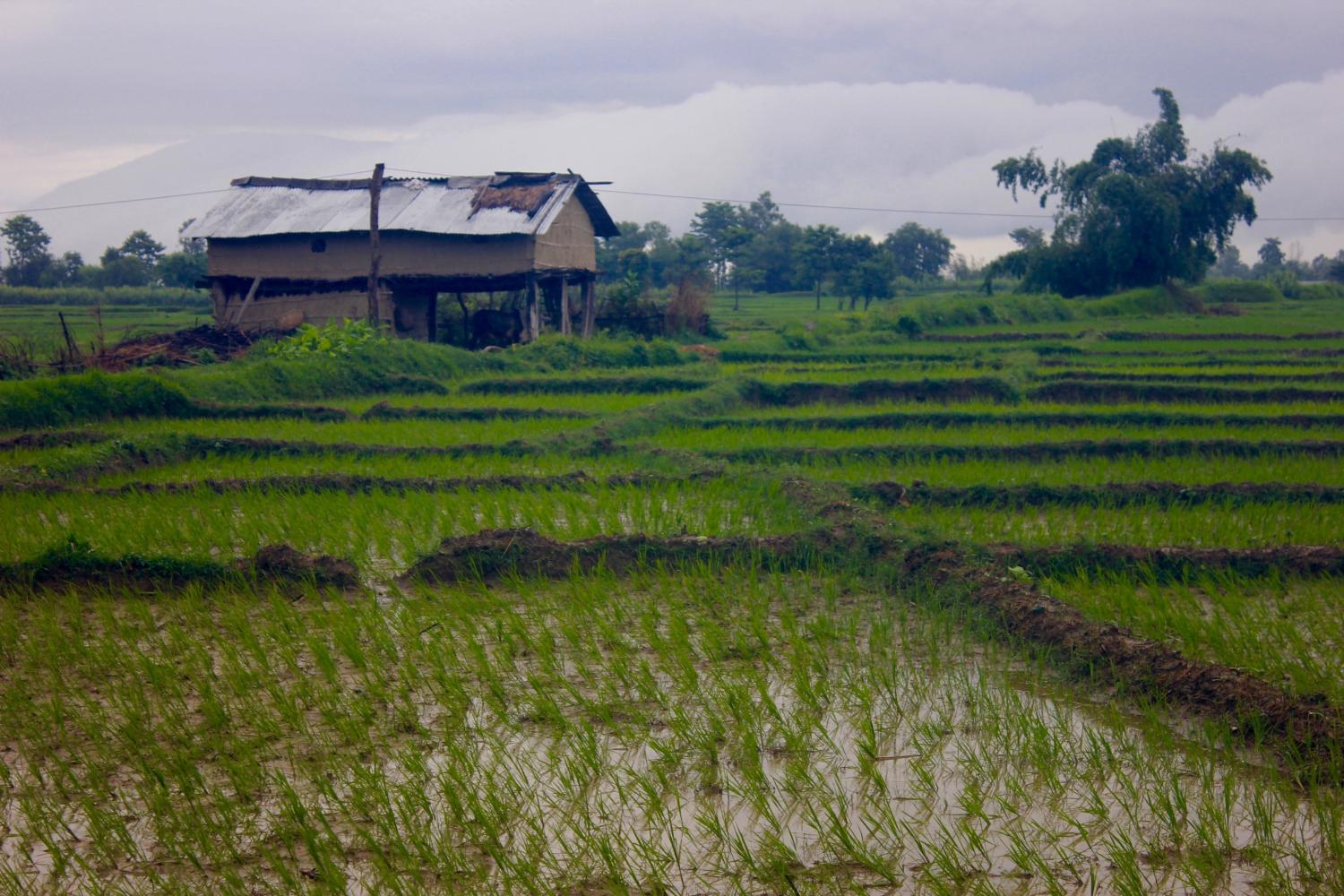 Agriculture in the Terai

The people who farm the banks of the Karnali River and occupy Rajapur island are primarily Tharus, the ethnic group indigenous to Nepal’s Terai. Over the last 50 years, many Paharis (hill people) have also migrated to the region due to its fertile croplands. Almost the entire population of Rajapur actively practices agriculture, planting paddies during monsoon and wheat and other crops during the dry winter season. 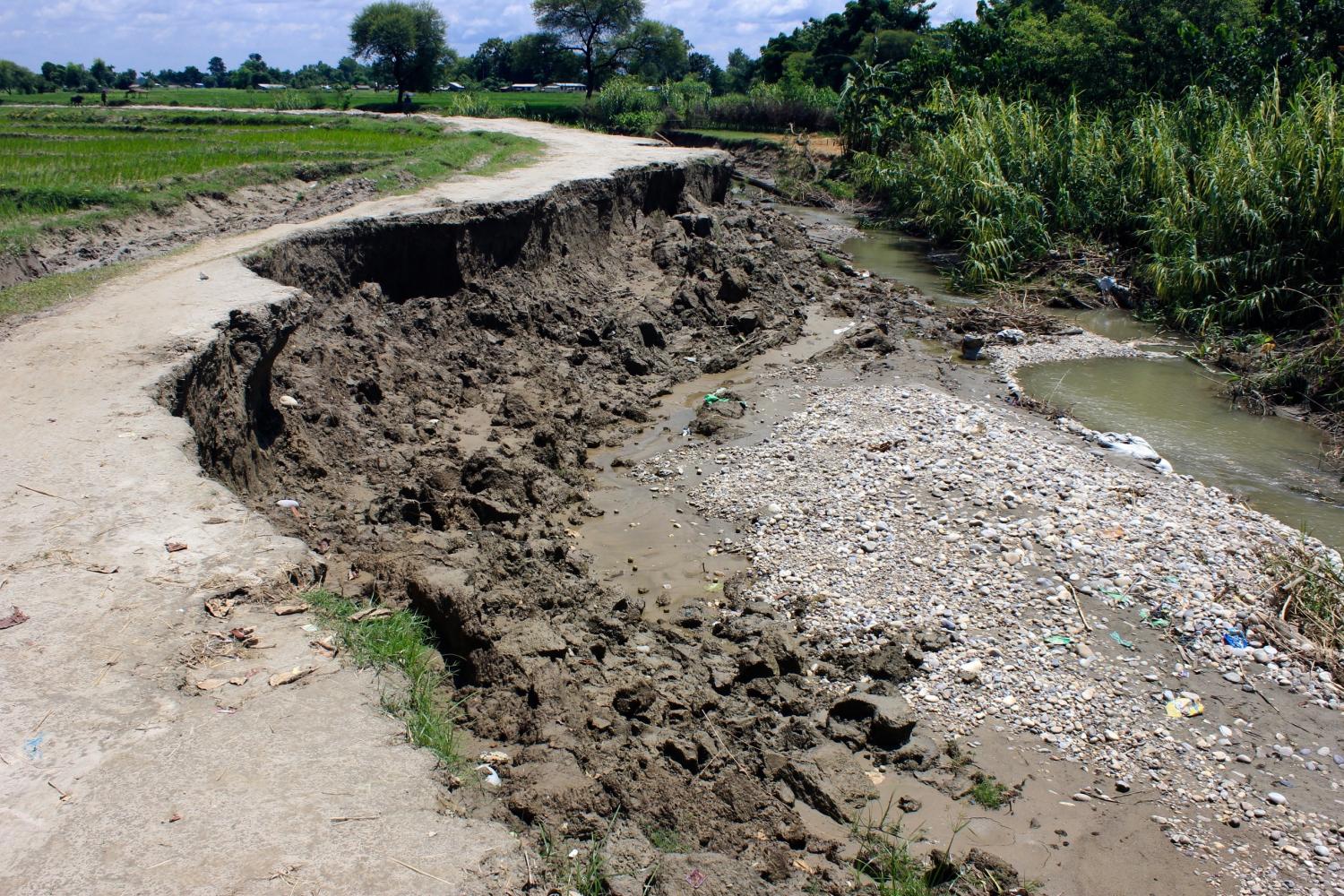 Even narrow kulos, or hand-dug irrigation channels, can become violent rivers tearing away roadbeds and fertile fields when the Karnali floods. 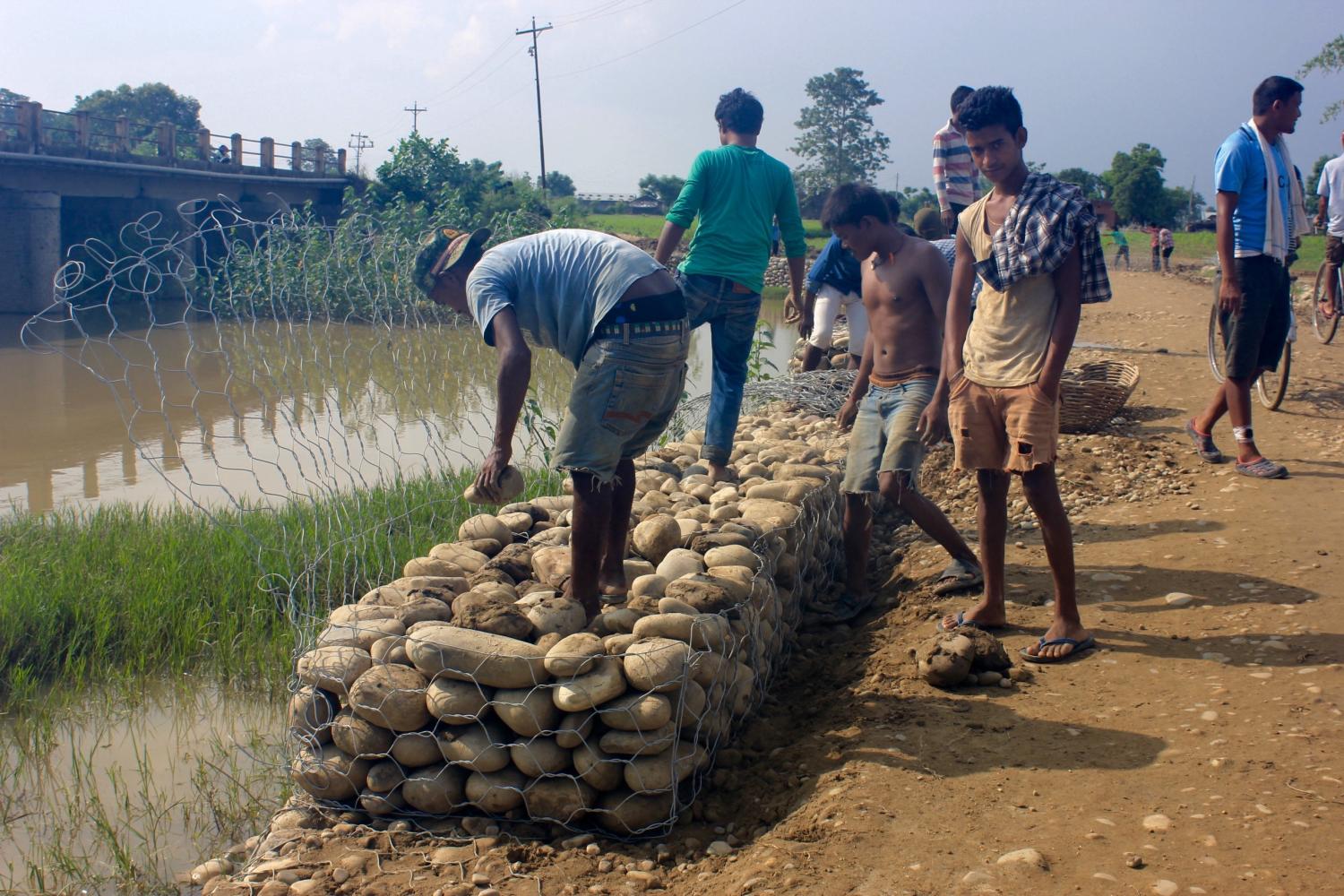 The concrete bridge in the distance, which connects Rajapur to the rest of Nepal via the East-West Highway, was ruined during the 2014 flood. Until the government can repair it, local residents labor to fill wire cages with stones to build a temporary roadway over the river. Emergency flood shelters have been built by NGOs in strategic places across the island for community members to retreat to during times of high water. Households are warned through a series of graduated alarms as part of the early warning system. 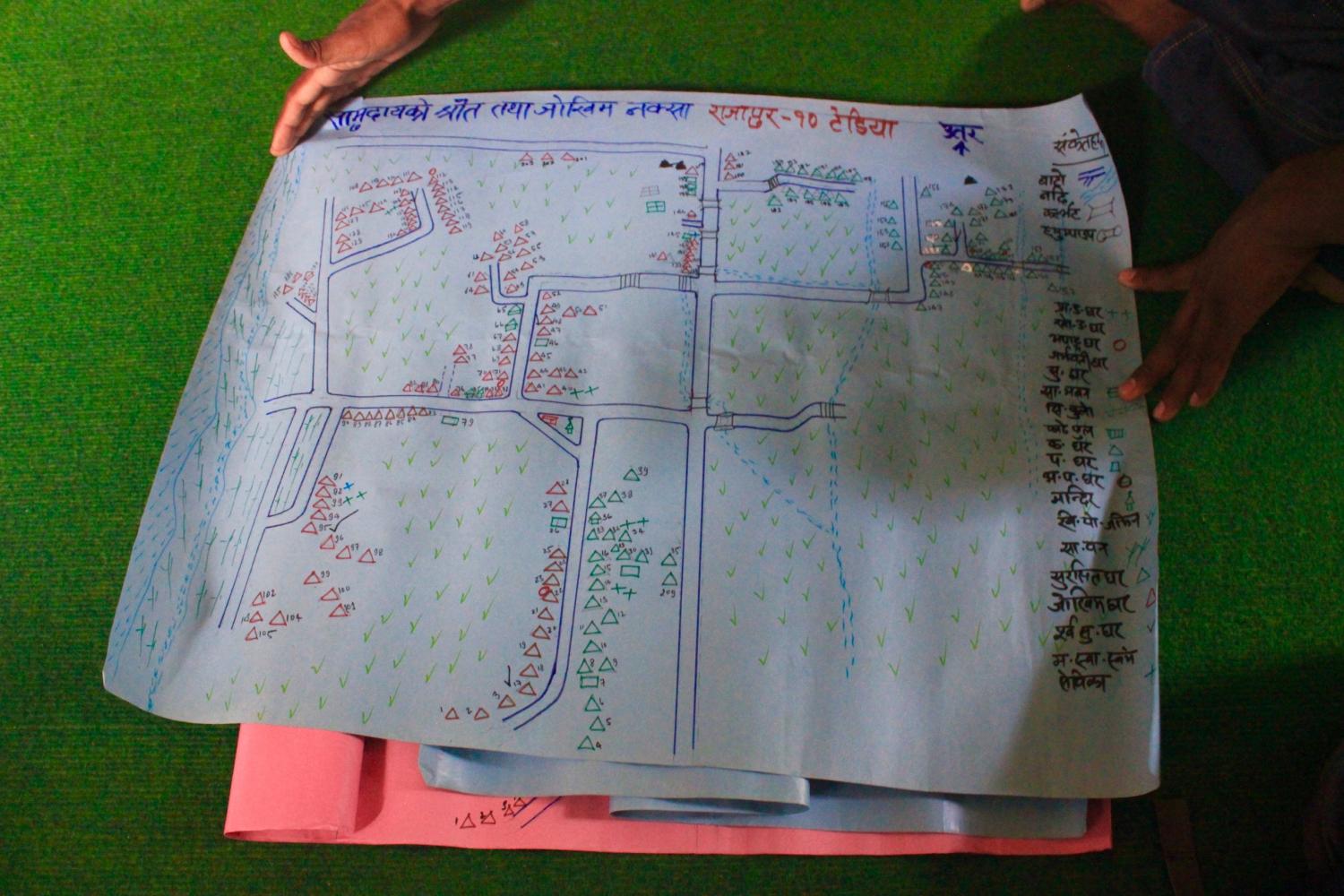 Flood risk map created by residents as part of an NGO-initiated community-based vulnerability assessment. Red triangles indicate homes in the village most at risk due to their proximity to the river and easily eroded mud and earthen design. 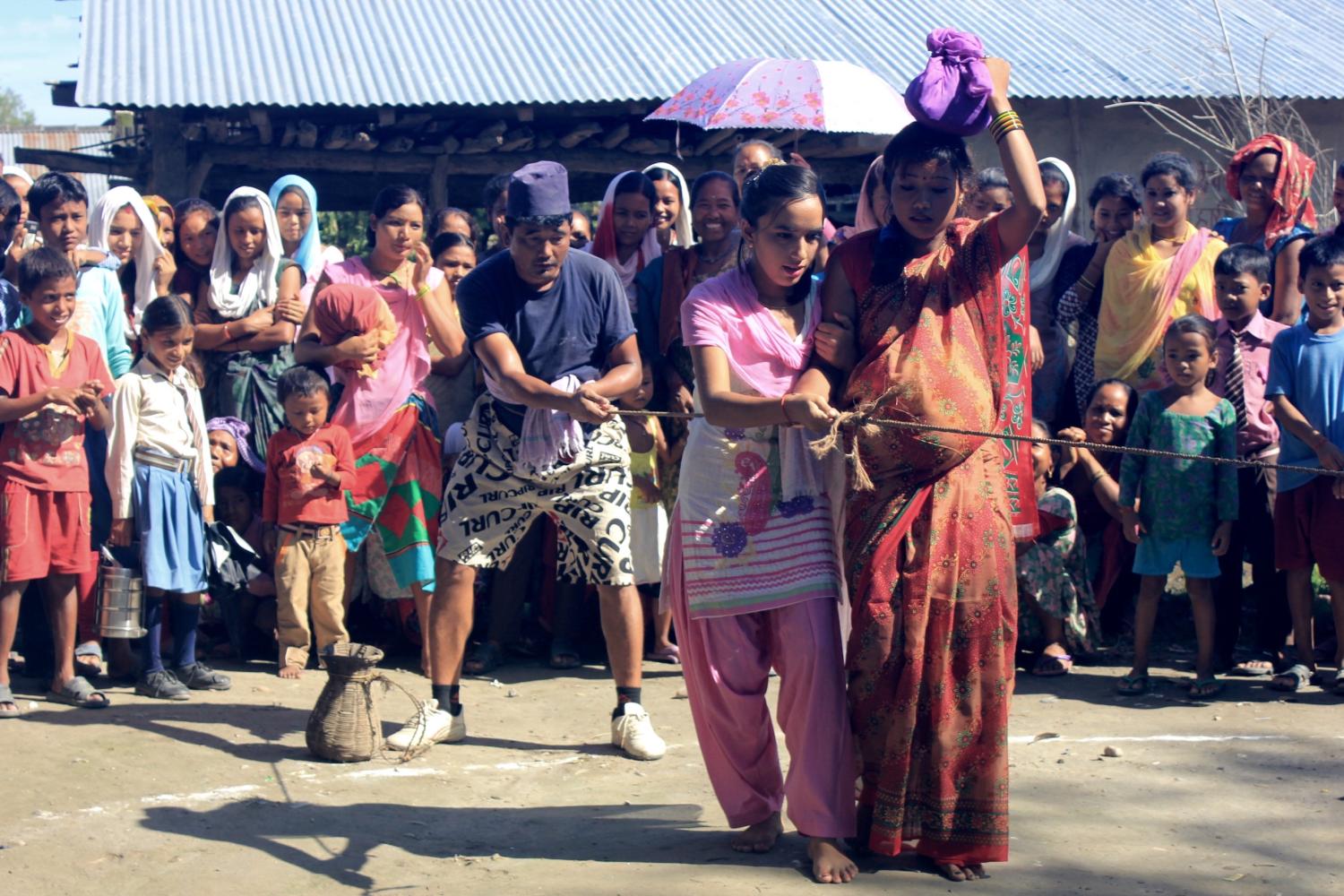 Actors and actresses demonstrate how to evacuate a pregnant woman and other vulnerable community members to safety during a traveling street performance. 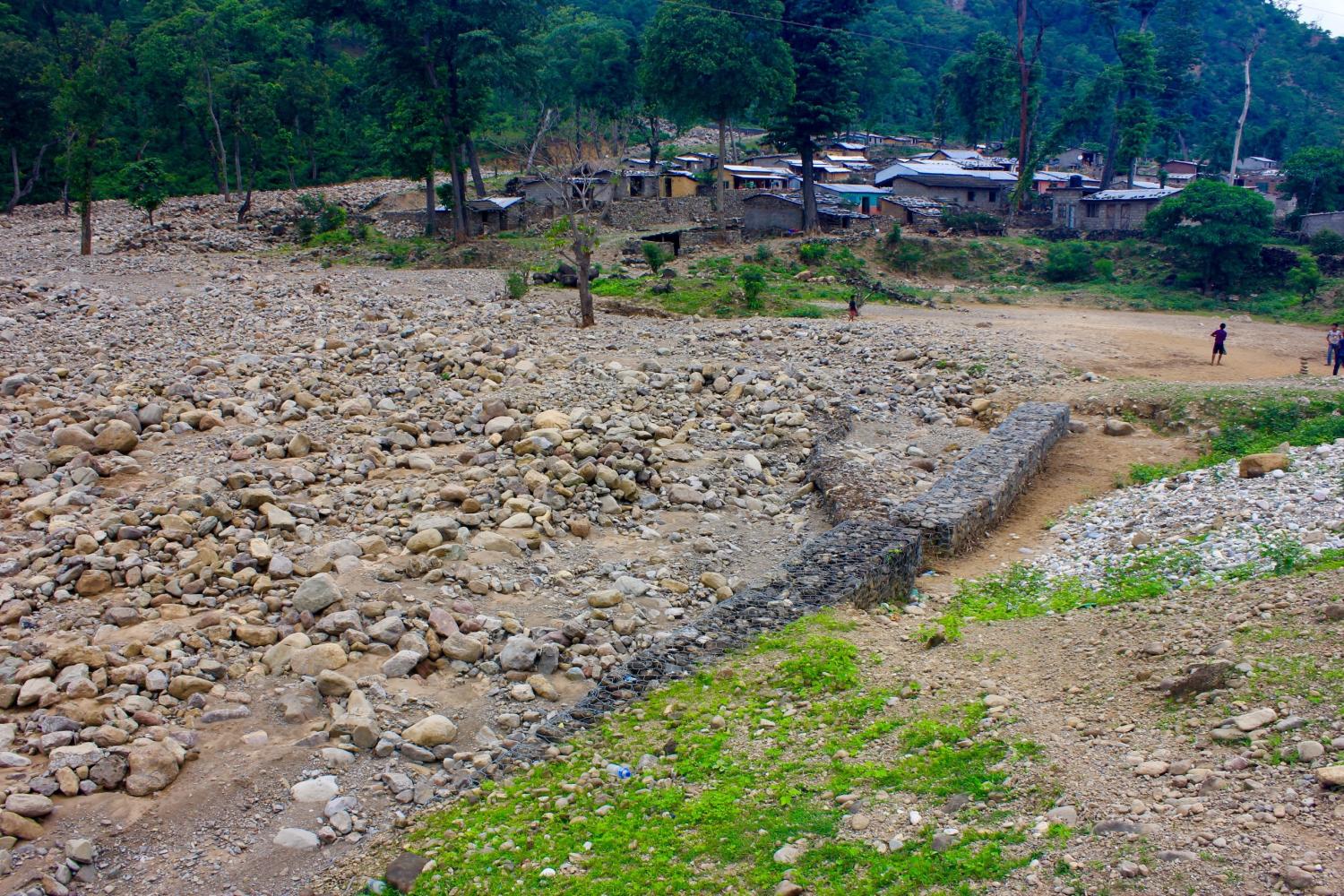 Flash Flood in the Hills Above

Upstream from Rajapur, flash floods tear out of the Chure hills, destroying villages and adding volume to the already swollen Karnali River during monsoon. 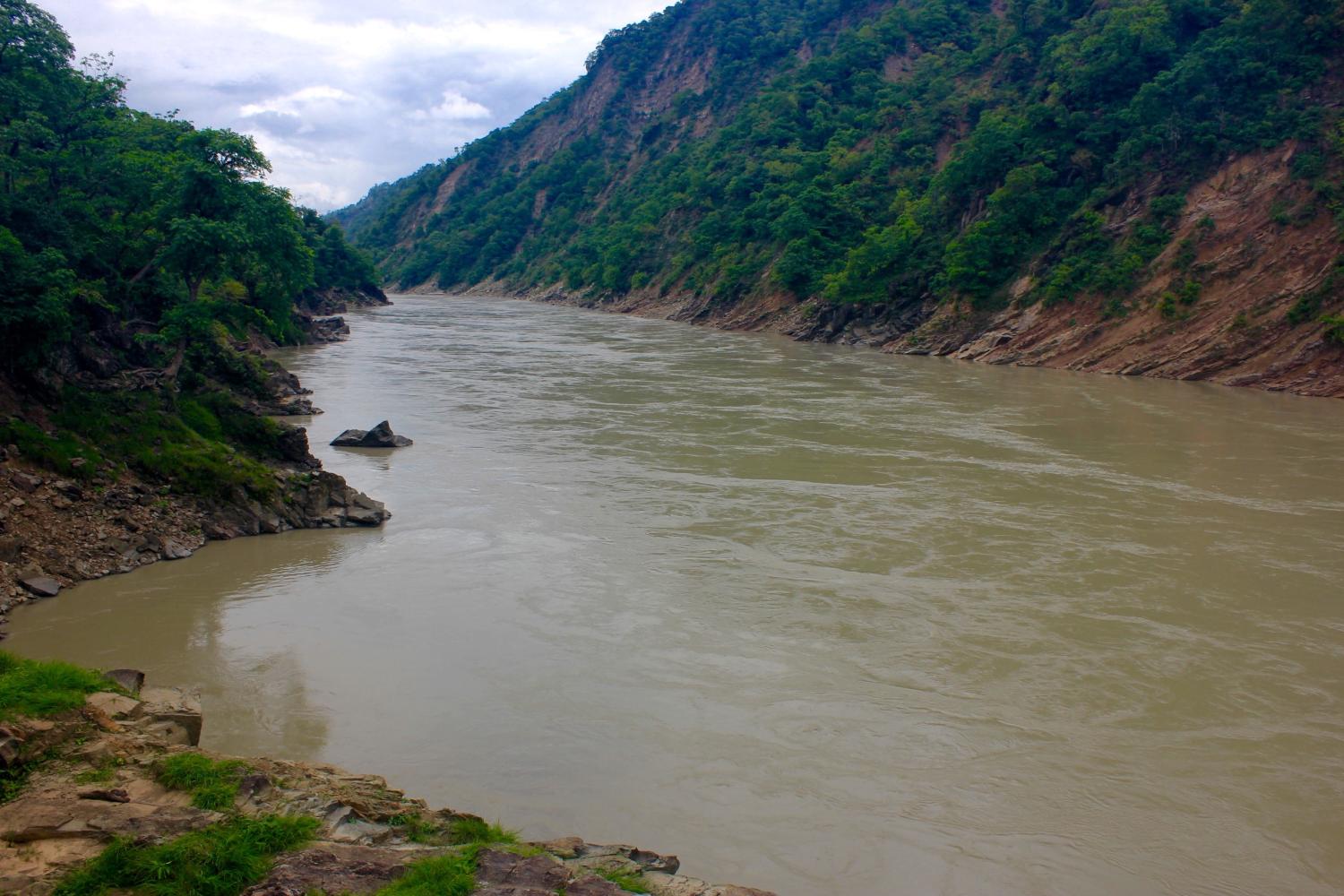 Karnali River in the canyon at Chisapani, where river level and rainfall data is collected by a gauge reader employed by Nepal’s Department of Hydrology and Meteorology. Here the Karnali River is forced through a narrow channel as it churns out of the foothills before spreading onto the Terai. 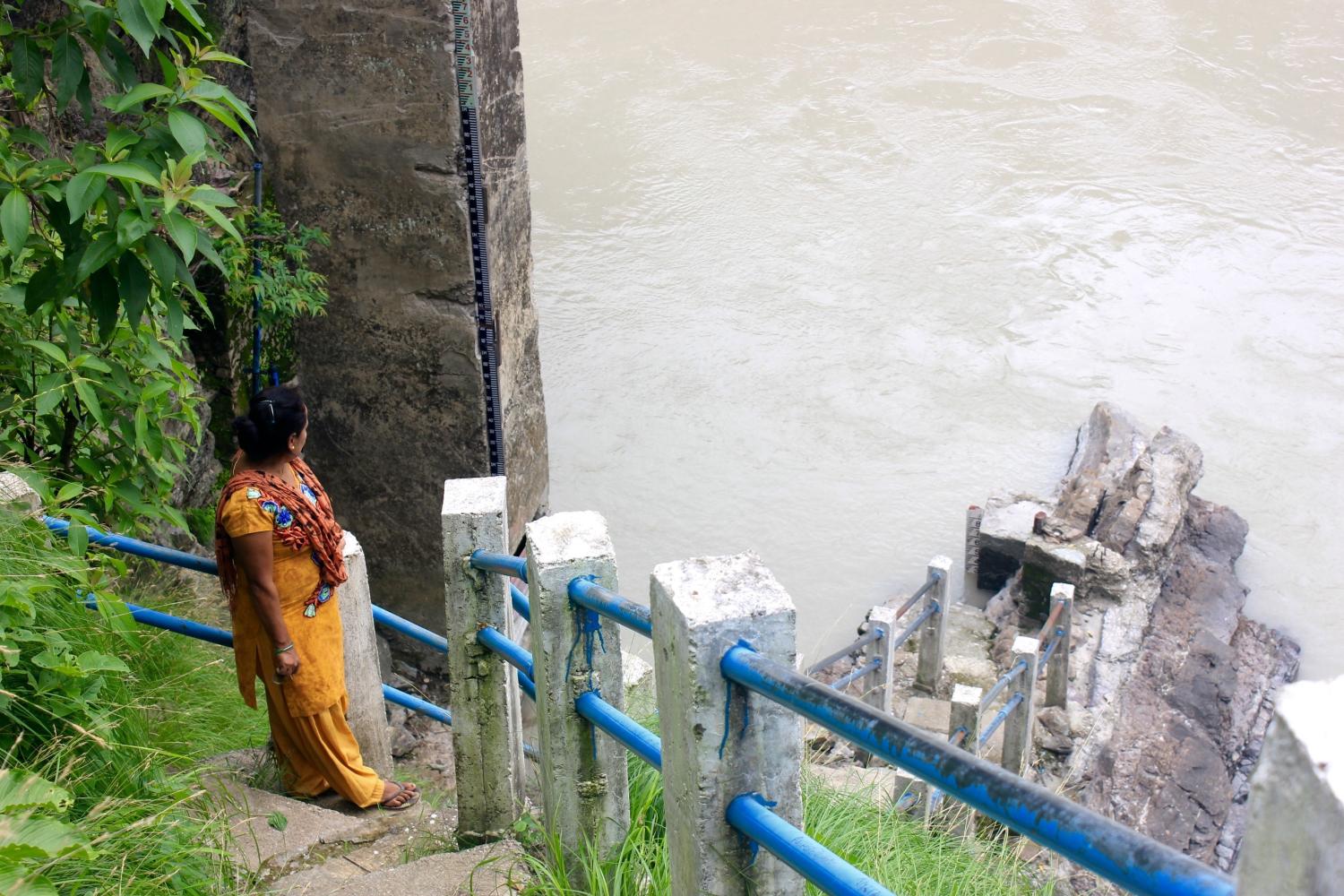 Gauge reader at Chisapani who has been reading the river here since she was a small child. Her father did this job before her until he slipped to his death while monitoring the flood of 1989. Although most downstream residents have never met her, she is revered as a hero for the warning she provides so that others may save their lives. 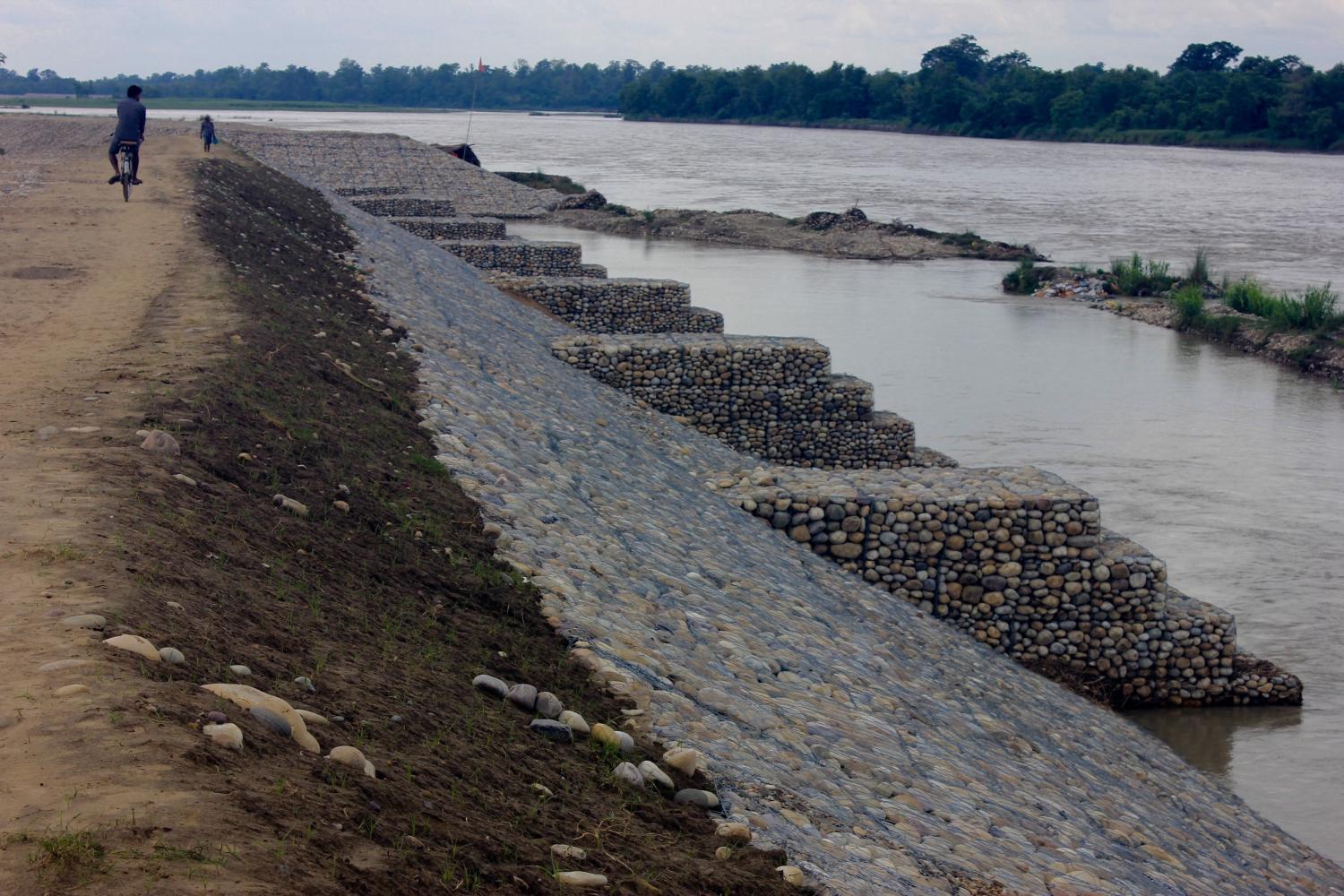 This brand new 1.4 km embankment is positioned in the area where the older, lower wall breached during the devastating 2014 flood sweeping away a swath of jungle and a small Hindu temple. This newly built embankment instills hope in many hearts that it will offer some protection to the homes and fields that border the Karnali. 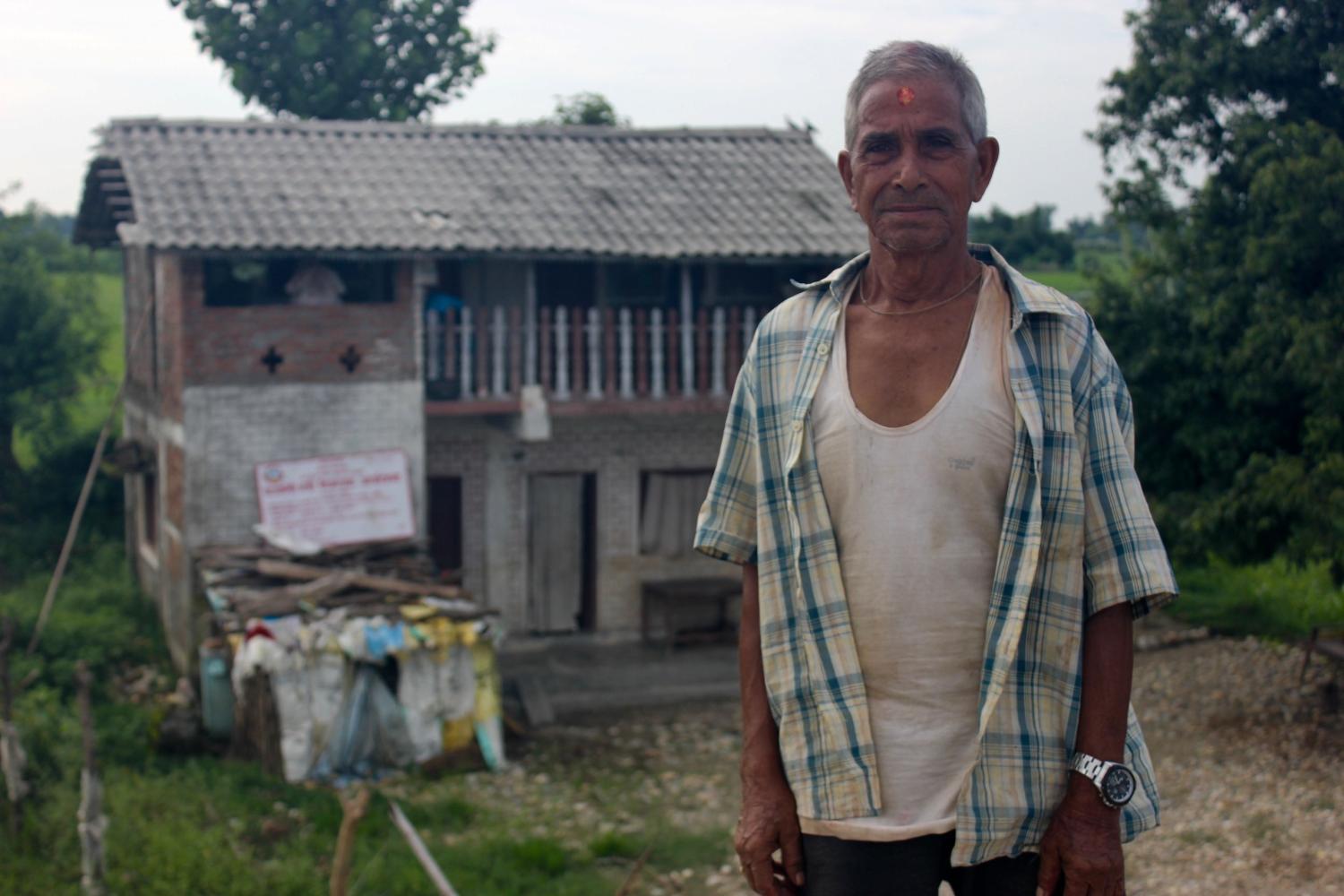 This man asked me to take his picture and share his story. His home in the background was the only structure in the village to withstand the 2014 flood despite severe damage. At 77-years-old and with tears in his eyes, he told me how he had labored for weeks on constructing the government-sponsored embankment in front of his house and even donated his own land to the project. 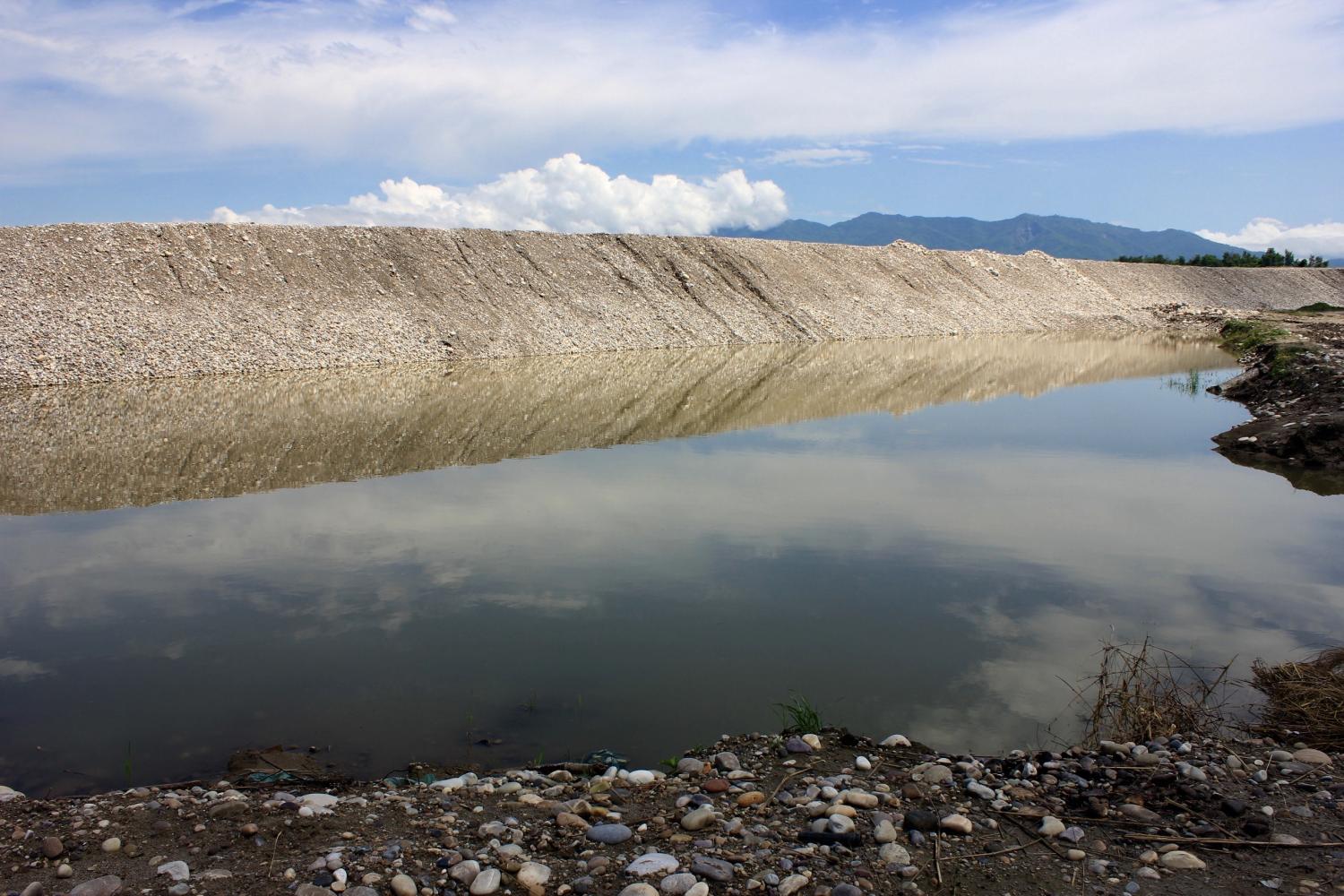 The Other Side of Embankments

Despite the protection they provide, embankments also have another side. This picture illustrates the immediate process of waterlogging that occurs following construction, often leading to the inundation of fields, which spoils crops and can force relocation. 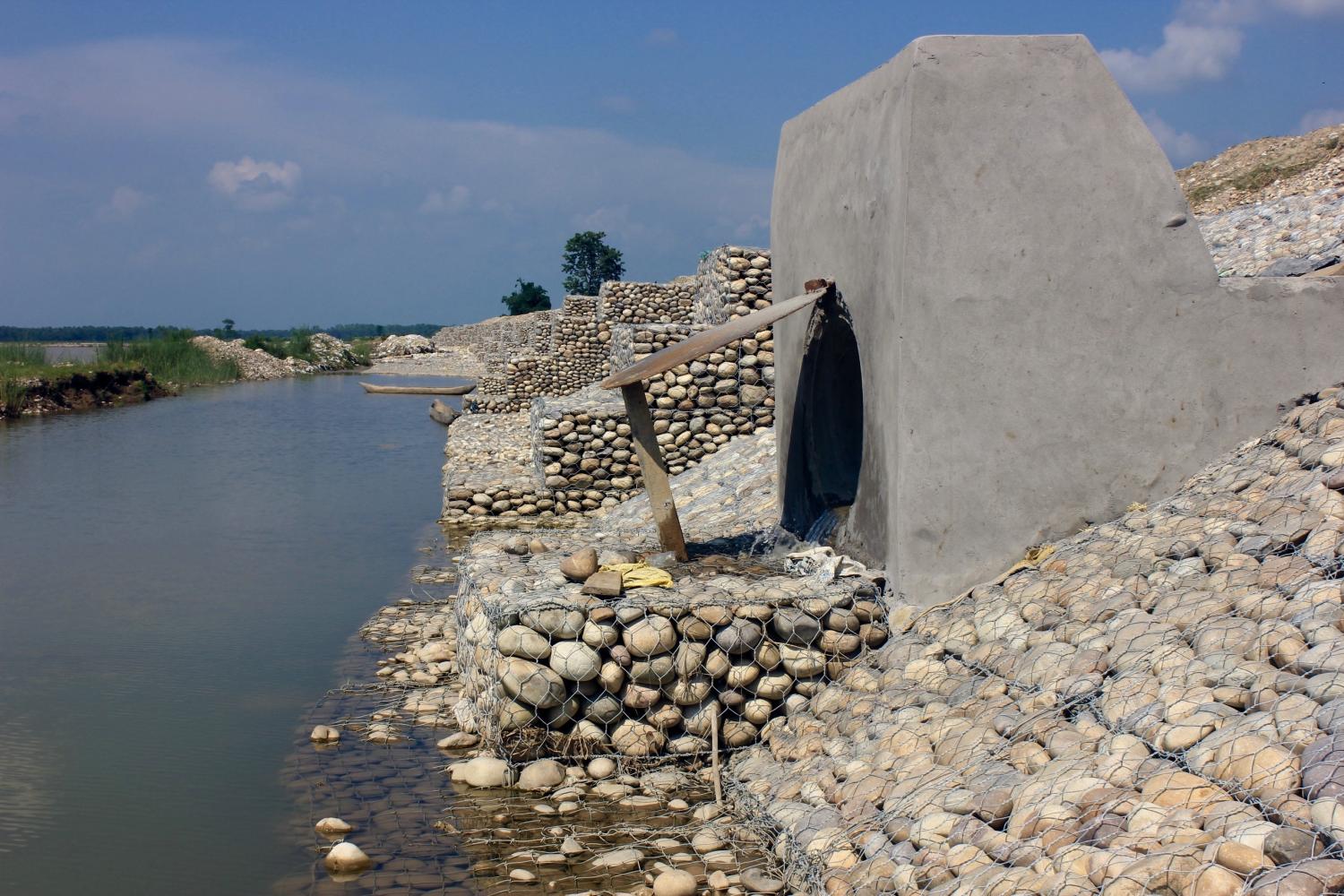 This newly constructed embankment has a functioning anti-flood lock structure for draining land behind the embankment. Theoretically, the door should say open when the river level is low, but be forced closed when the Karnali waters rise to protect farmland from getting backwashed. However, the positioning of the drains is problematic. If they are low enough to provide adequate drainage for farm fields behind the embankment, the outlets are at risk of getting suffocated by sediment in a just a few short years as Himalayan rivers deposit on average 10 cm. of sand each year. 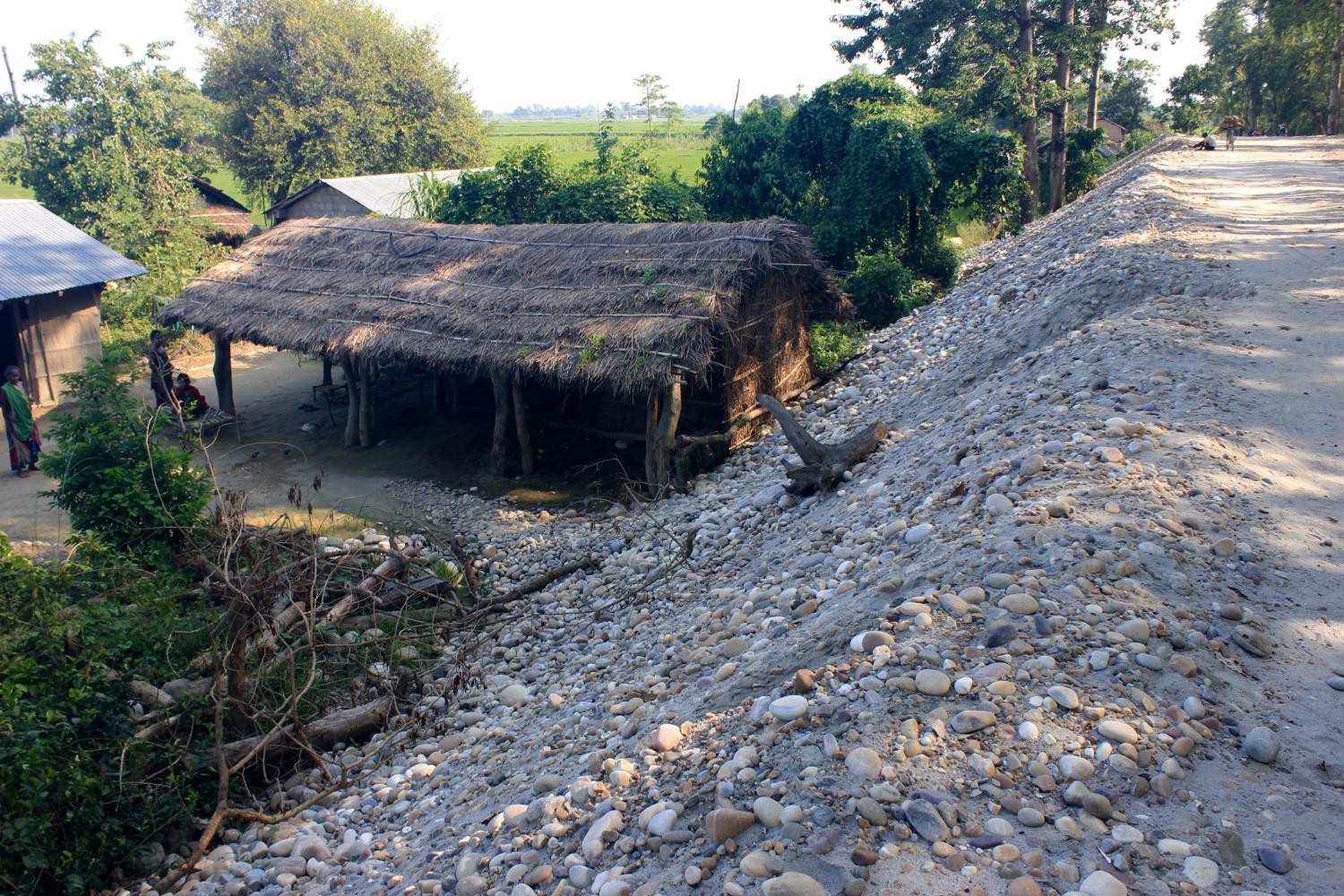 House with new embankment spilling into its courtyard. While many find the protection of embankments assuring, some households must make more sacrifices then others. Here, a new stretch of embankment yet to be stabilized has been built practically on top of one village. Besides being required to donate their land to the project, families must scramble up and down the loose scree to their homes and in just two months since construction, waterlogged fields have already led to crop loss. 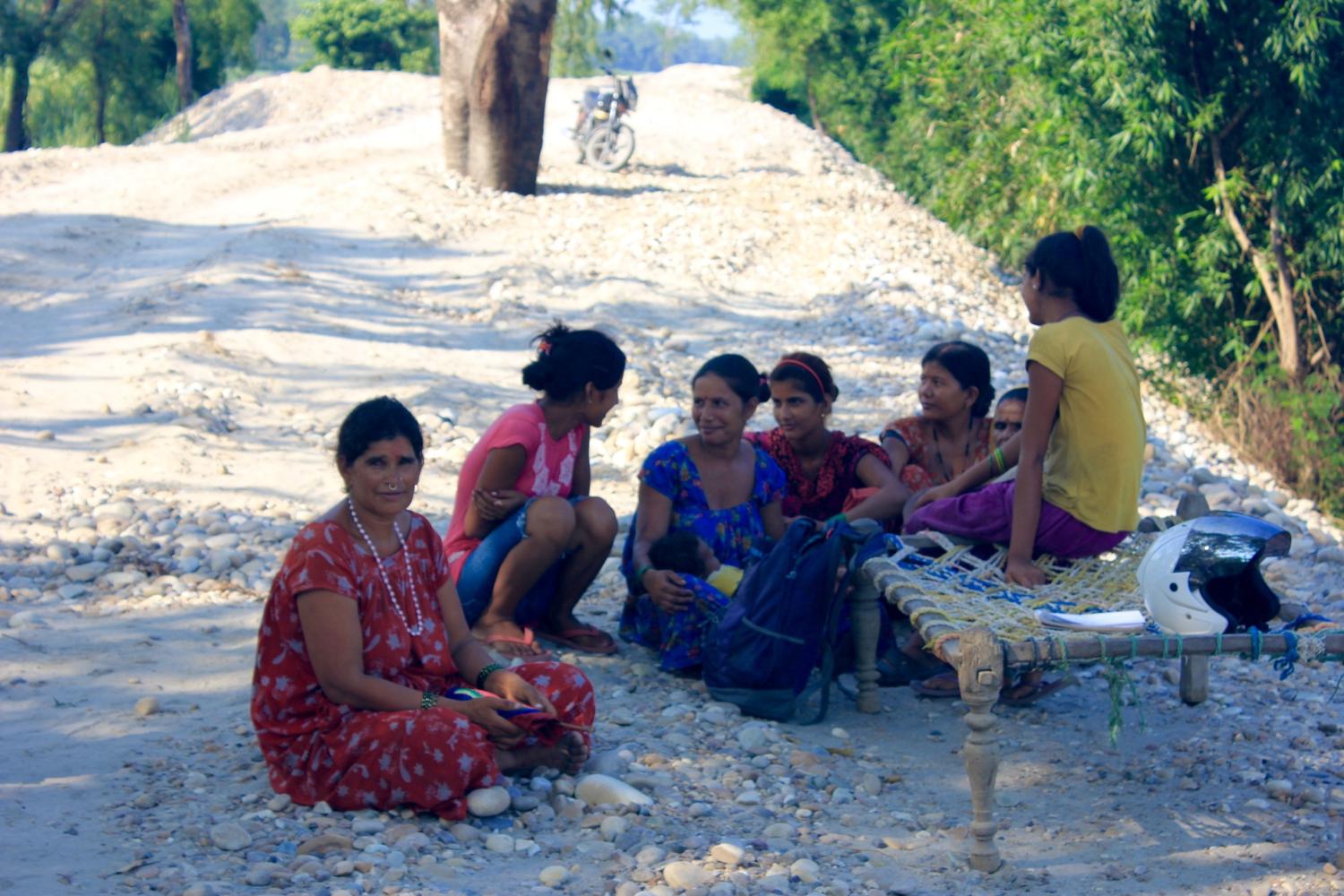 Focus group of women from the houses beneath the embankment. I was told that they had climbed up from their courtyards to catch a breeze from the river. During our conversation, several individuals conveyed the feeling that they were already suffering more from the embankment than the protection it might offer. Elderly women complained of their struggle to get up and down the embankment's steep sides, their inability to access their ox carts parked up on the top, and the effects of waterlogging on their fields. 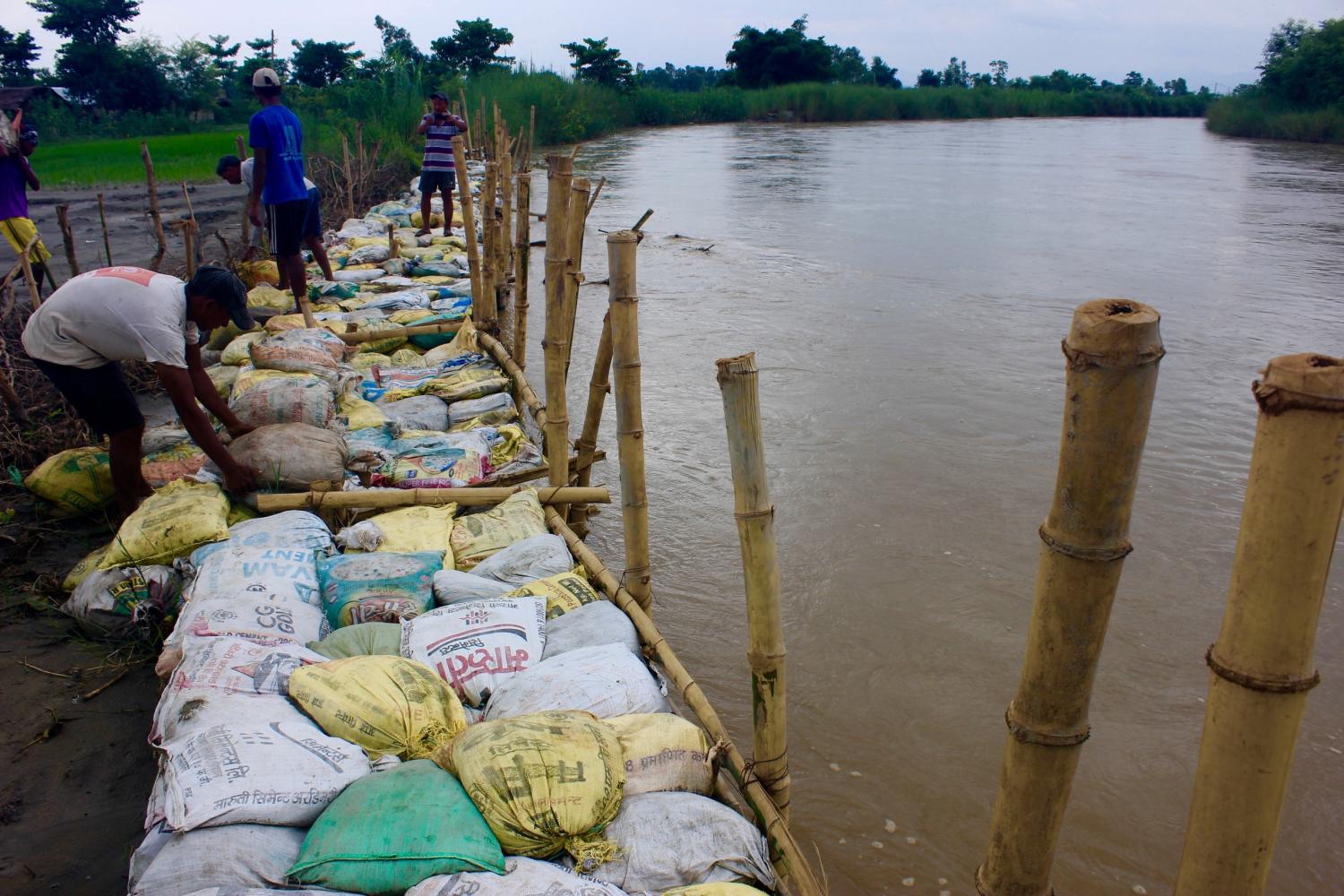 Local farmers construct an emergency embankment out of sandbags and bamboo braces to protect their fields from sand casting along the Budhi Kulo, an old irrigation channel which flows through the center of the island and now carries a significant amount of the Karnali’s waters. The project leader said that he has been begging for technical advice from district and municipal level officials for weeks but had not received any response. Thus, the farmers were left to innovate interventions on their own, cutting sand that had been previously cast on adjacent fields to fill bags and stack them against the rising water’s edge. The bamboo supports were an adaptive measure initiated by the community this year in their desperation to build a structure to hold back the floodwaters. 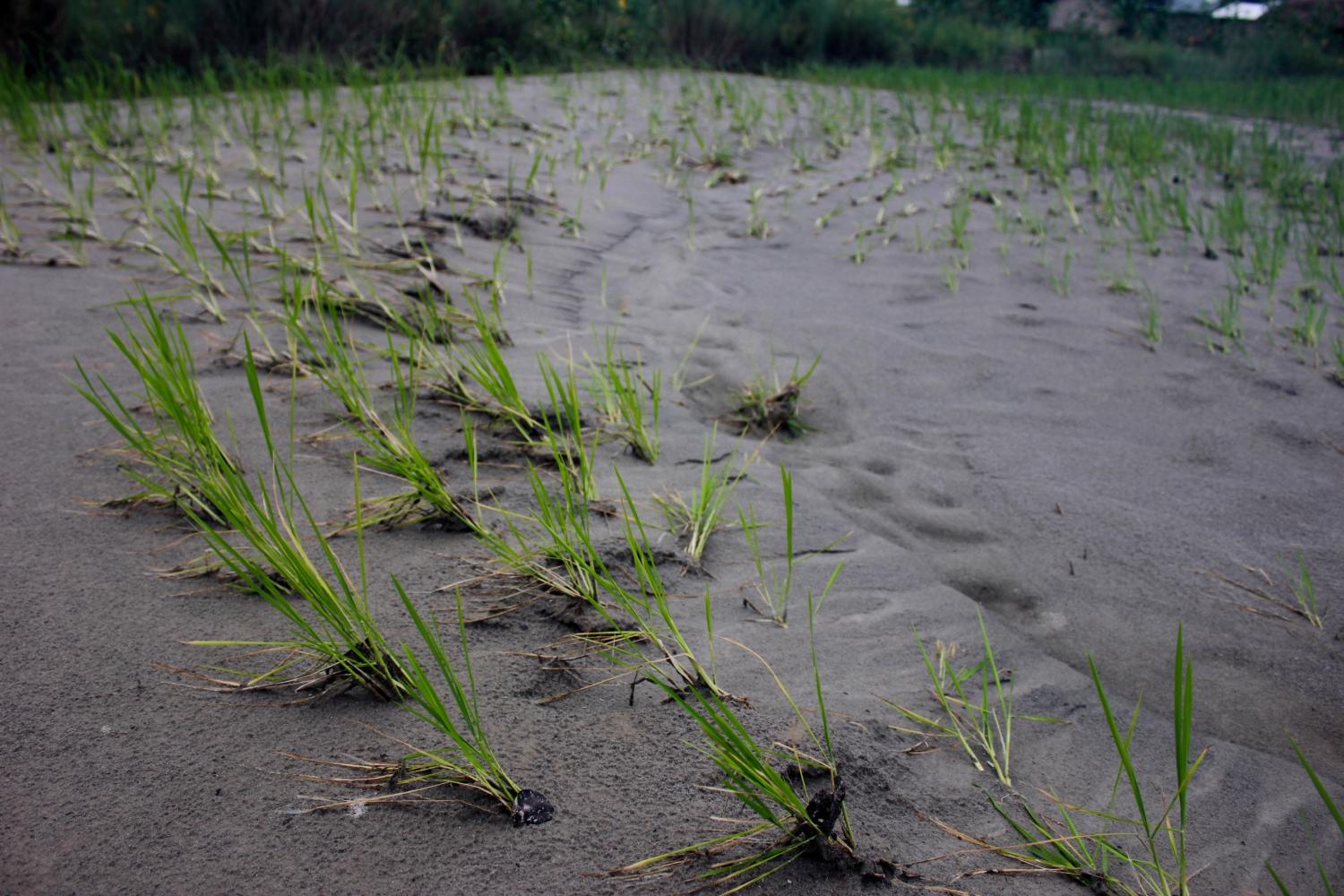 Sand deposition a foot and a half deep covering ruined rice paddies where the Budhi Kulo spilled out of its sediment-clogged bed. This land will likely never be reclaimed as even a thin layer of sand leads to a 15-year process to rehabilitate soil fertility. 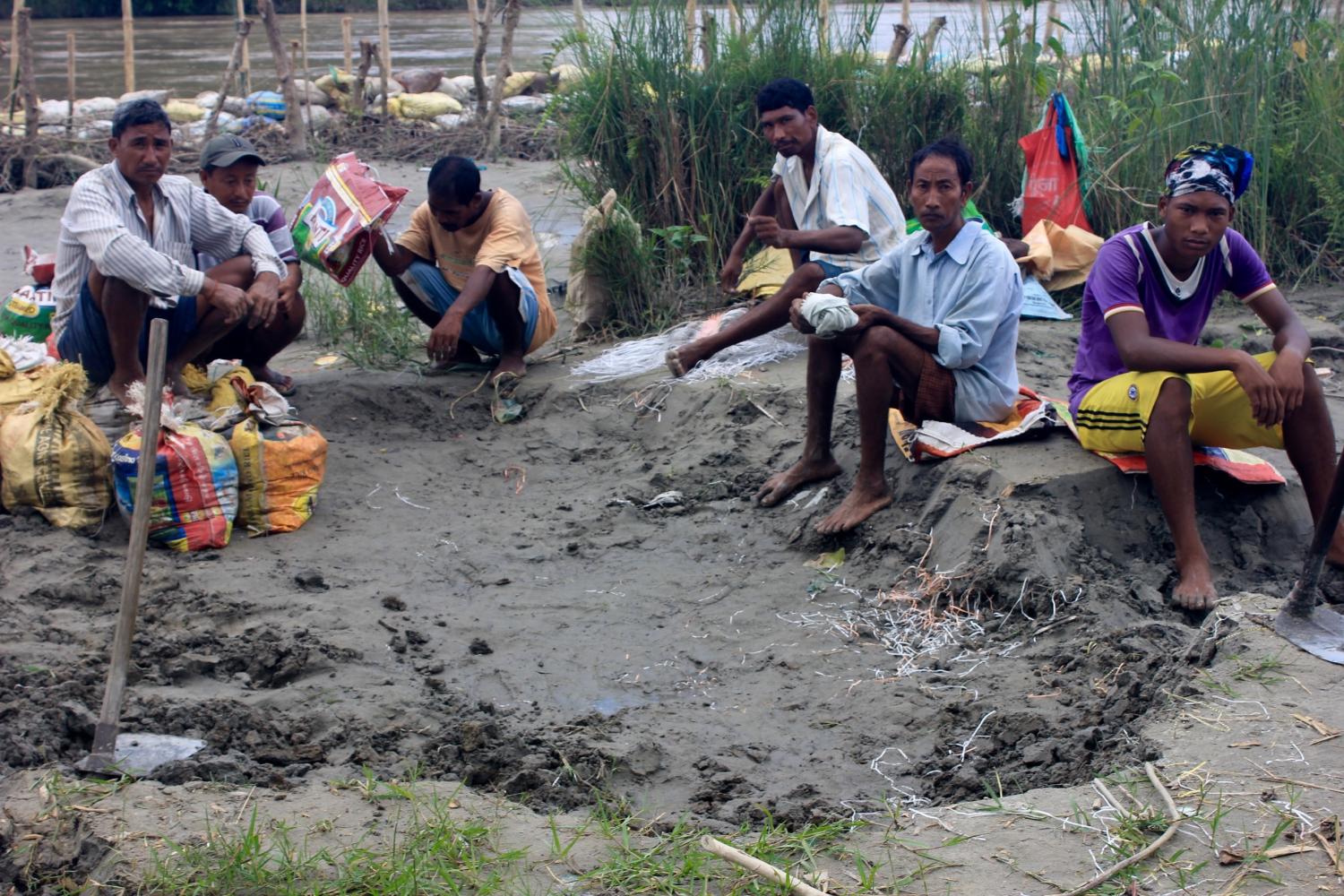 Local farmers take a rest, even as the river continues to rise, from their desperate attempt to embank the Budhi Kulo before their fields are lost to sand. 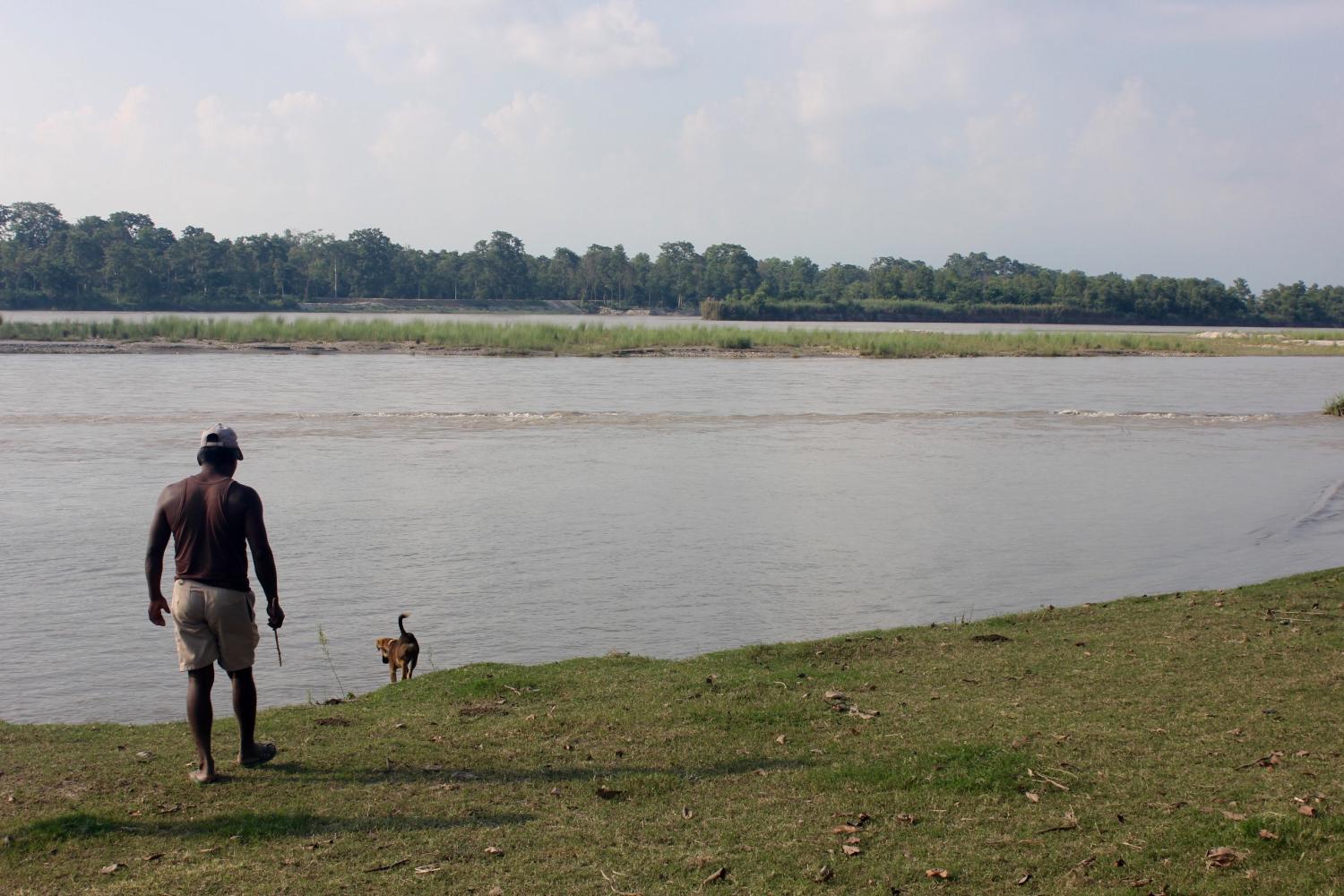 A man walked us to the edge of the Karnali and pointed to an eddy in the water. Pointing to the roiling river, he explained how he used to grow paddies and vegetables where the river is now and that he still has a title to the land in the bottom of the river. He has been trying to build traditional embankments to divert the river and reclaim some of his soil. 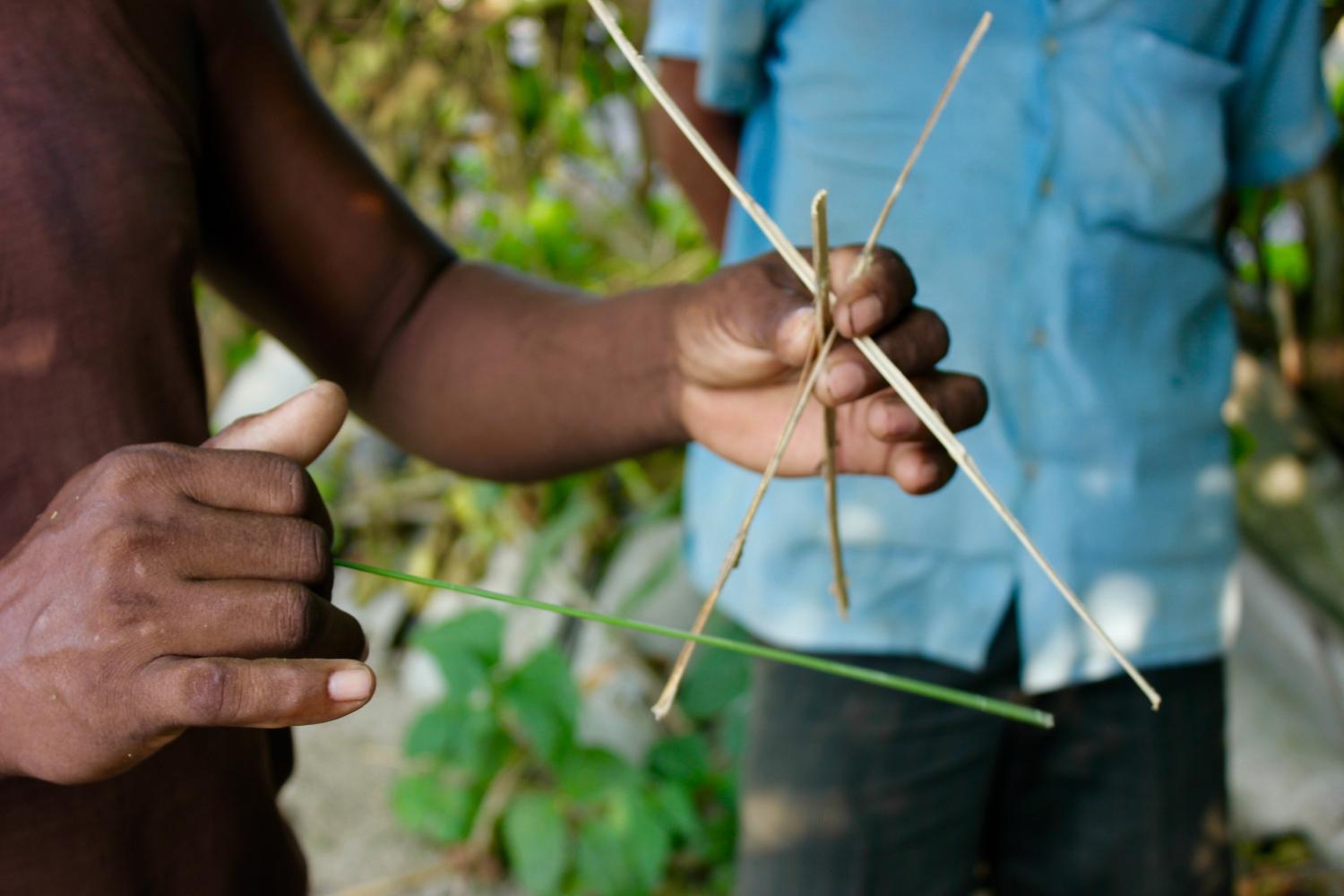 The same man demonstrates with a sliver of bamboo how his ancestors built traditional “three-legged” structures to protect the riverbanks from cutting. This technique has recently been recognized and adopted with minor modifications by the Nepali government as an emergency erosion protection technique. 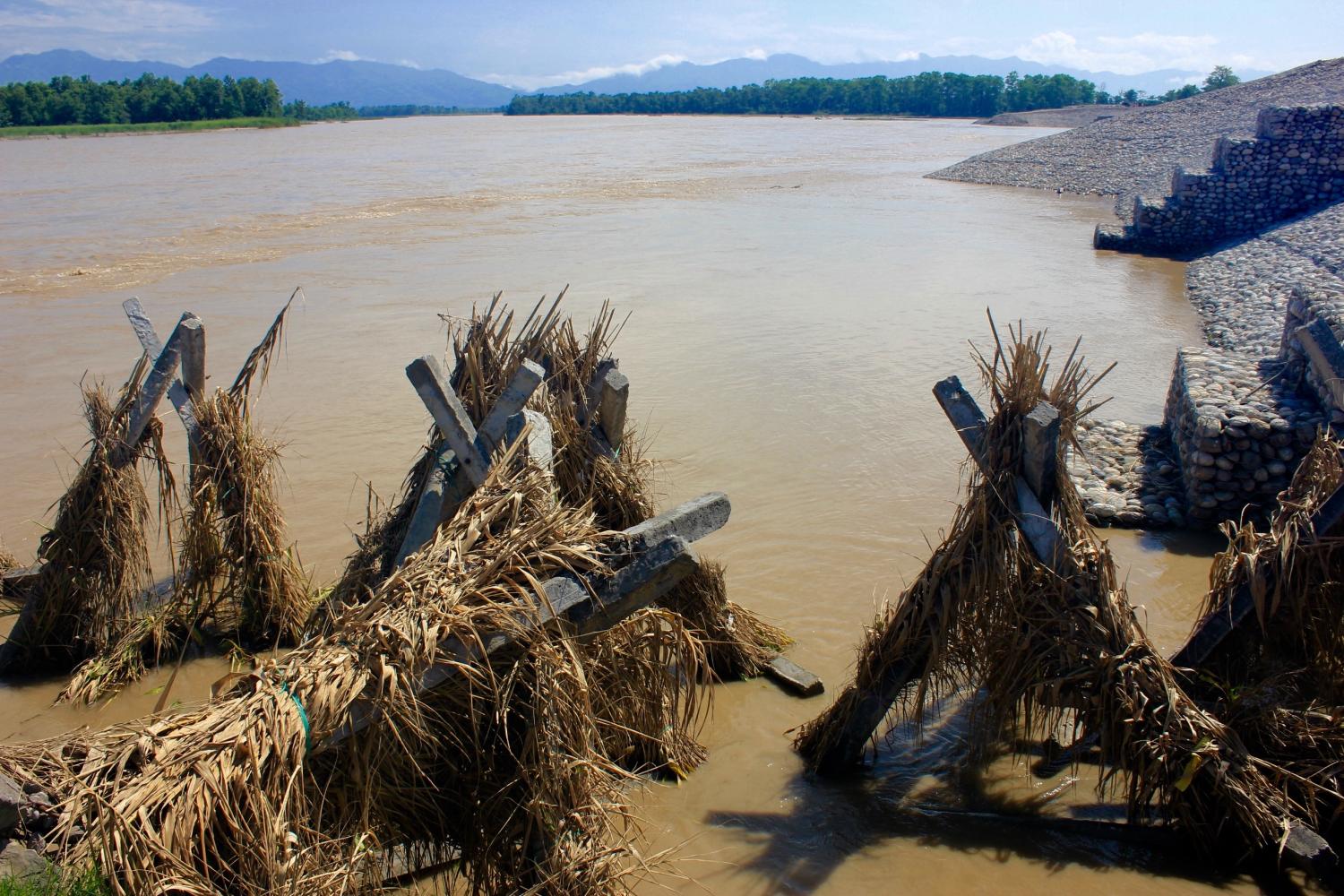 "Porcupine" structures, inspired by traditional knowledge, constructed by the government from concrete pilings to protect the Karnali’s banks until the permanent river training project can be extended to this stretch of the river. 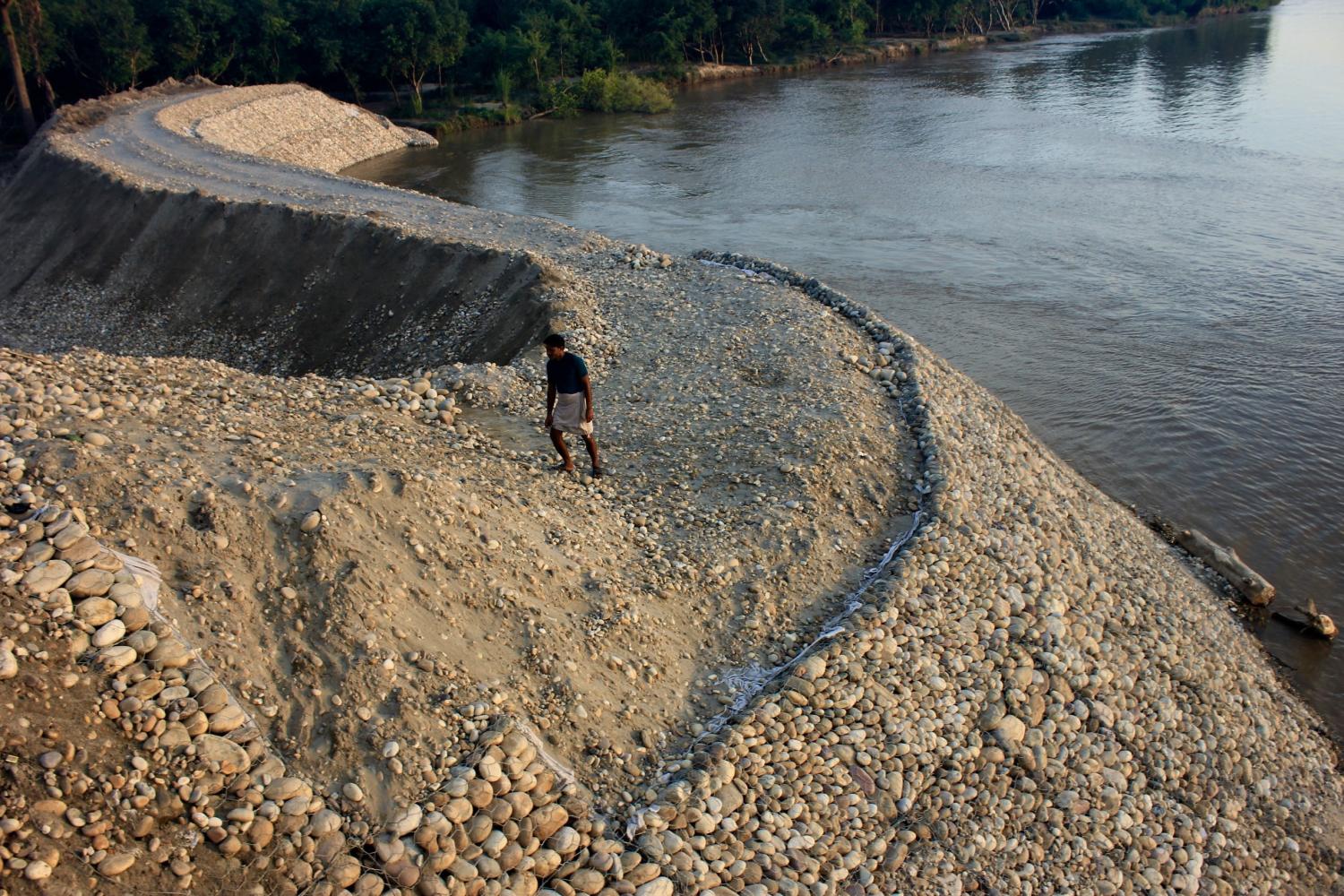 Man walking on the newest extension of the Karnali River Training Project. This embankment is still mostly loose sand and stone excavated from the river itself that must be reinforced with gabion wire. 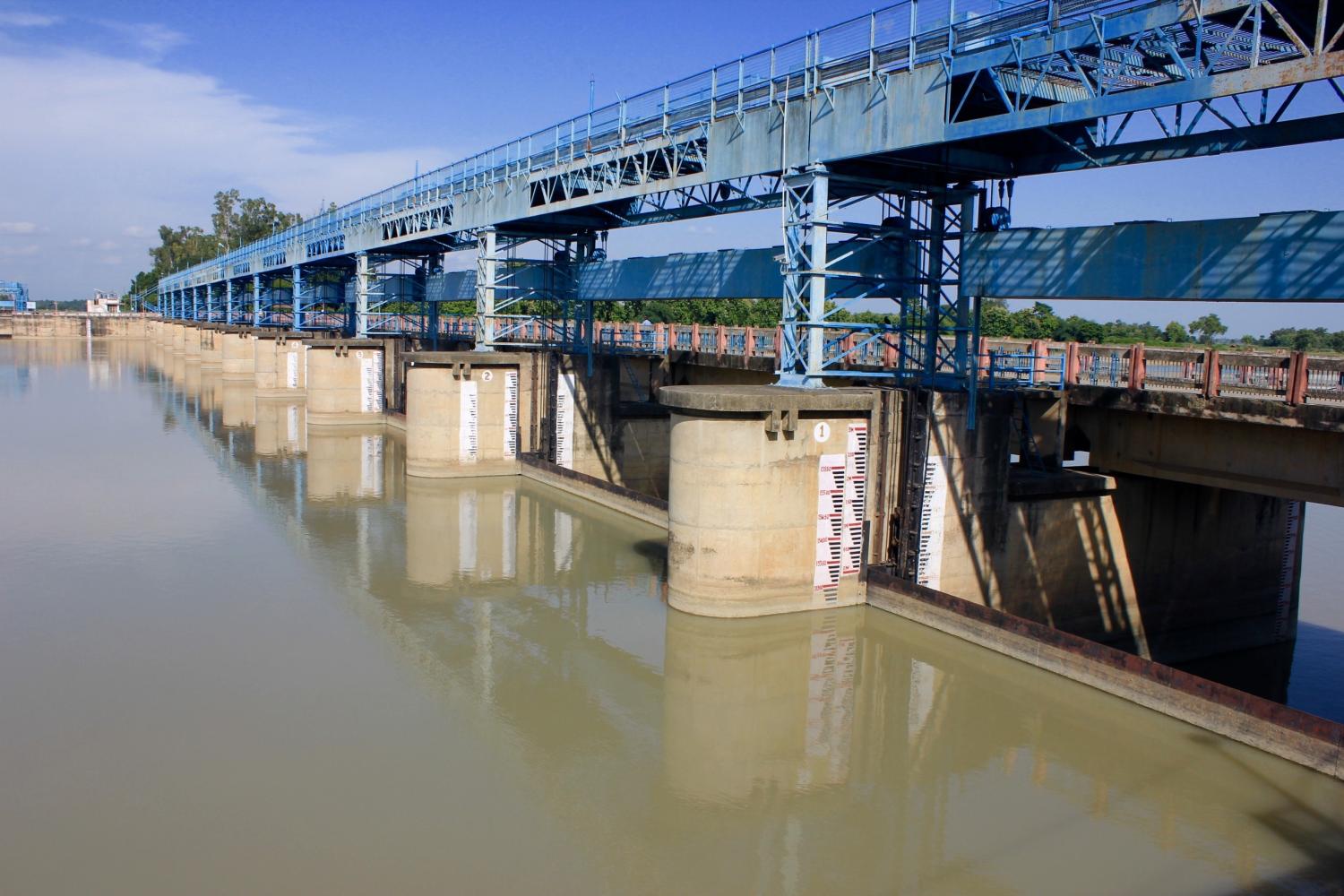 The Saryu barrage on the Babai River is very similar to others across the Terai including the Kailashpuri barrage 10 km downstream from Rajapur. These structures used for irrigation purposes and interlinking river basins by the Indians, play a controversial role in upstream flood dynamics. Nepali communities like Rajapur have complained of increased water logging, sedimentation of river beds and irrigation channels, and common instances of sand casting on their fields due to the river’s impounded waters. 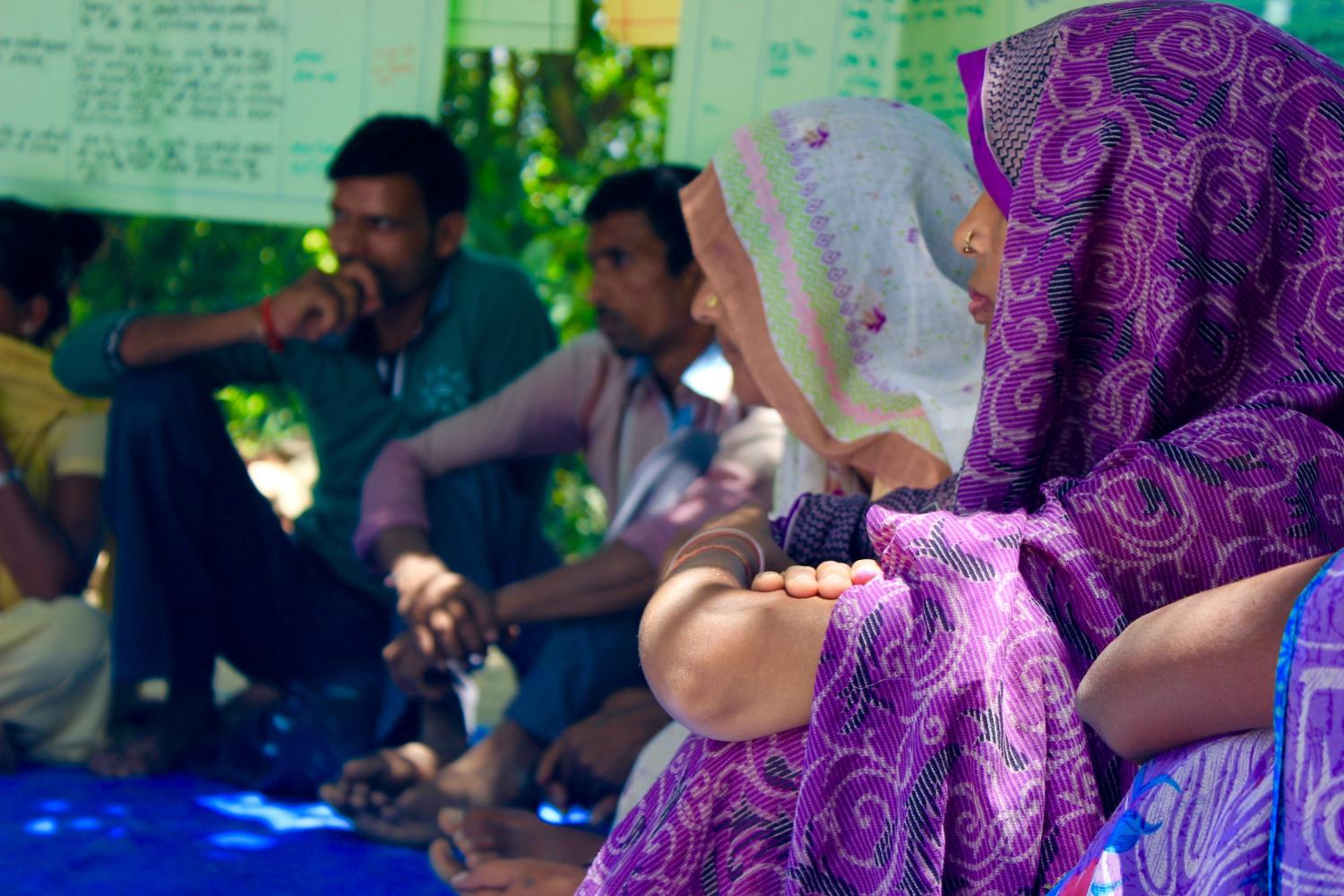 In July 2015, 16 community members from Nepali villages in Rajapur and the adjacent Babai river basin traveled to the Baheraich District of Uttar Pradesh India, to learn about the flooding issues that their downstream neighbors faced. This exchange between rural Nepalis and Indians both facing chronic flooding, was coordinated by NGOs on both sides of the border and involved upstream and downstream communities sharing their best practices and creative adaptation solutions. 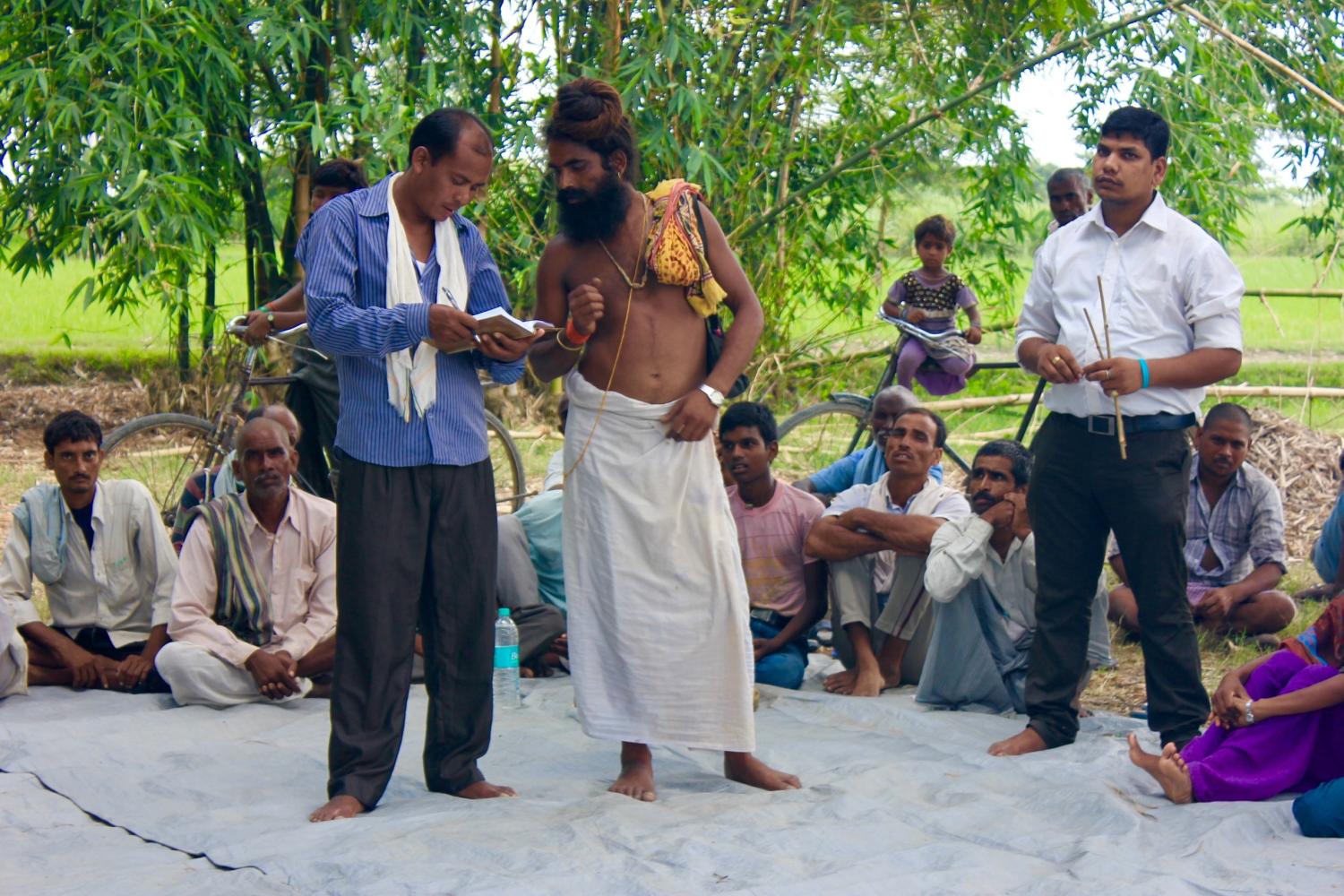 During the upstream-downstream exchange, individuals from Nepali communities were paired with emergency task force members from villages on the Indian side. Mobile phone numbers were exchanged so that upstream communities could relay information regarding rising water levels to villages several hours downstream. Since border villages of rural north India rarely receive timely flood warnings from their own government, this extension of the early warning system over the border has the potential to save many lives. 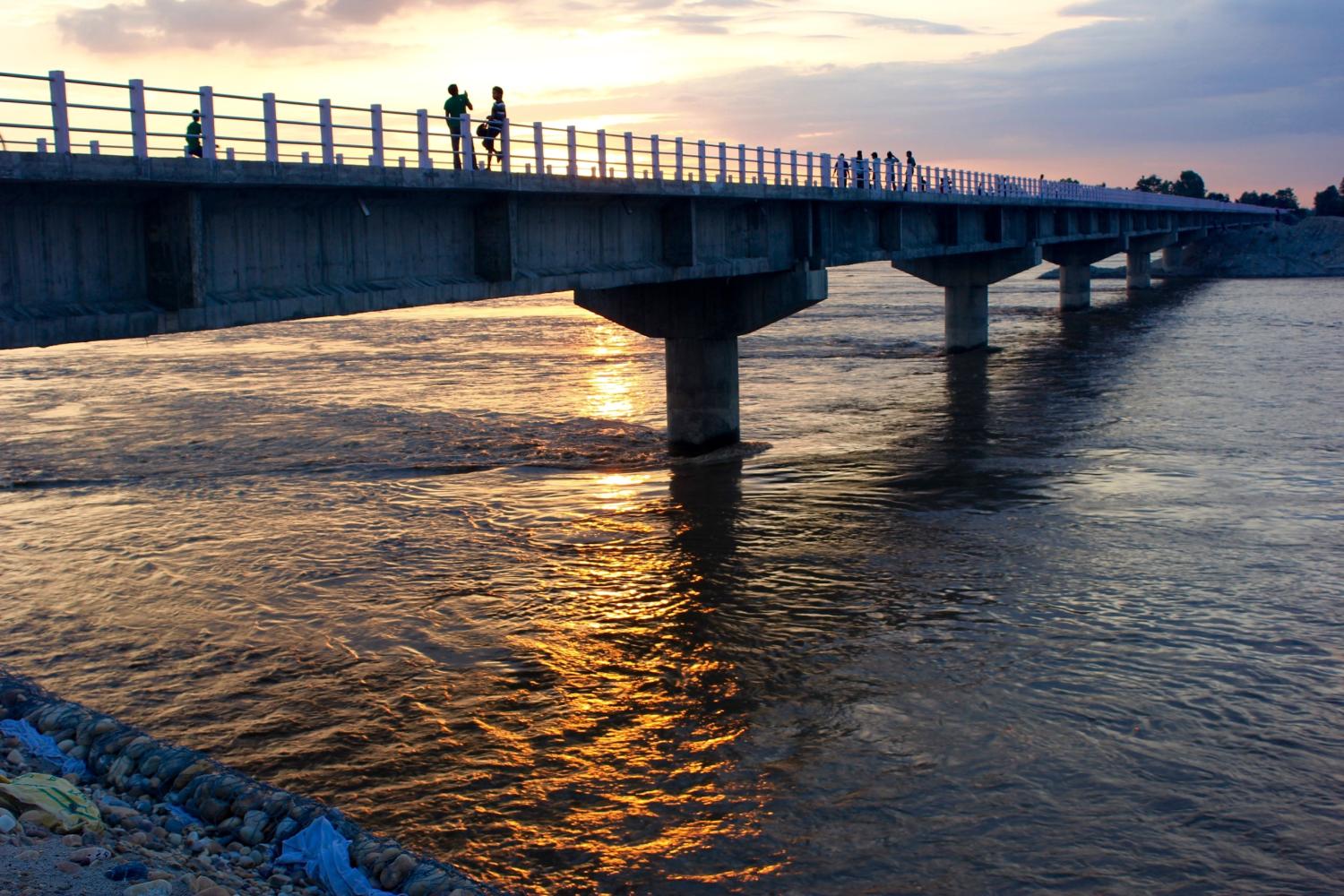 Bridge to the Unknown

Residents of Rajapur stroll in the evening to the brand new bridge that will connect their previously isolated island to Nepal’s East-West highway. Less than a year ago, the only way to reach Rajapur was by ferry and many still relied on hand carved wooden canoes to access the markets in Thikapur on the Karnali’s west bank. As major traffic is routed through Rajapur, the pace at which the island develops is going to increase immensely. The precise impacts of this change are unknown. Many are hopeful that it will lift them out of poverty or at least provide greater financial opportunities. Yet as Rajapur grows, the impacts of floods, which are bound to sweep across the island again, will also be amplified in complicated ways. 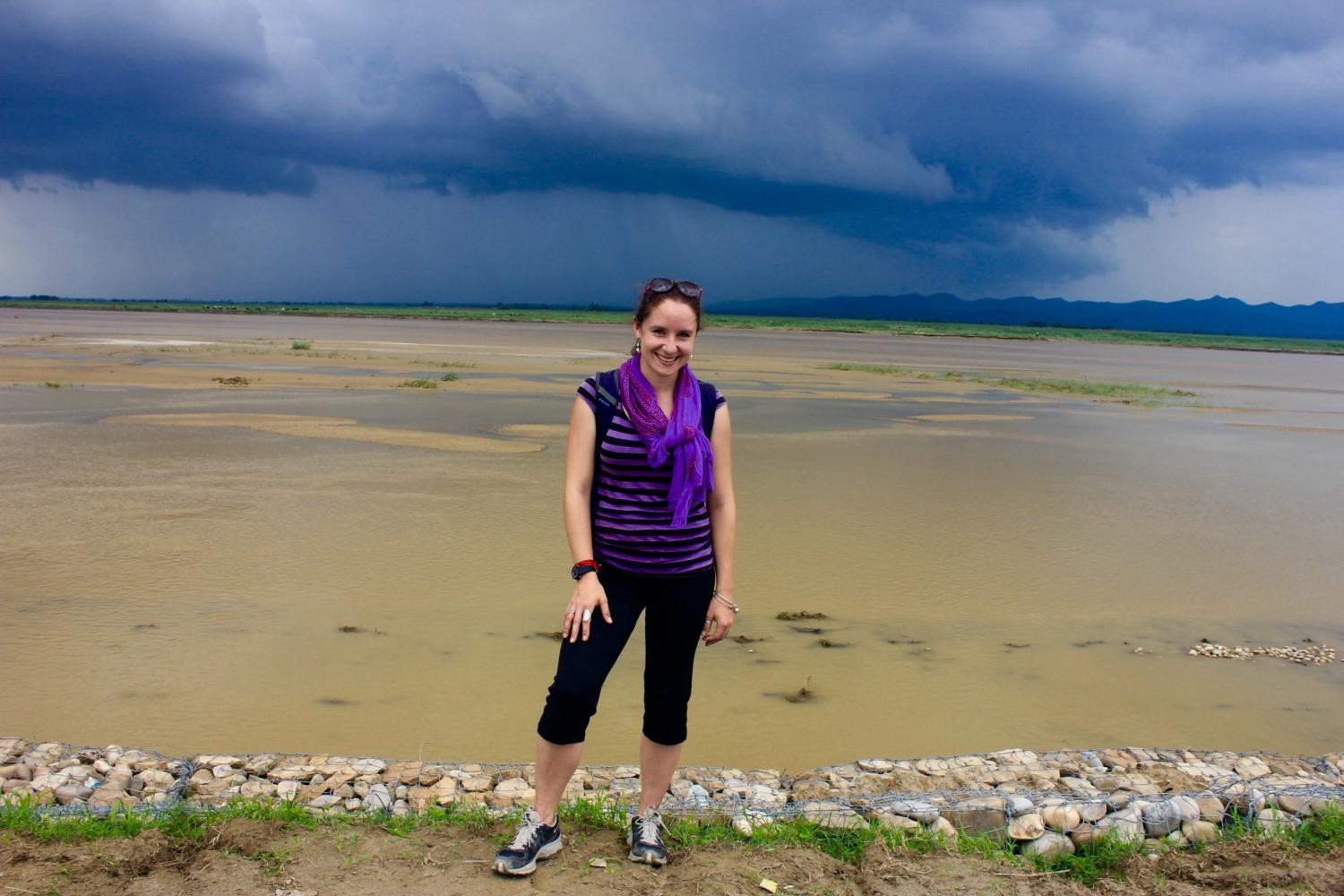 Sierra Gladfelter watches a storm rise over the embanked Rapti River during fieldwork at NGO headquarters in Nepalgunj.