The largest Buddhist institution on the Tibetan plateau can be found in nomadic areas of northern Kham, tucked in a valley just off the main road. Larung Buddhist Academy is an ecumenical institute focused on a monastic curriculum of scholastic study and home to well over ten thousand monks and nuns. Emerging as an encampment in the early 1980s, it was established as a Buddhist academy in 1987 by Khenpo Jigme Phuntsok (1933–2004), a towering figure in the revitalization of Buddhism in the post-Mao era, with the help of the Tenth Paṇchen Lama. Over the past three decades, Larung Buddhist Academy (also known as Larung Gar) has played an important role in revitalizing monastic scholasticism among the Nyingma and Kaygu traditions in eastern Tibet.

In addition, Larung Buddhist Academy is now the epicenter of an ethical reform movement spreading in nomadic areas surrounding Serta since at least 2010. One of Khenpo Jigme Phuntsok's principal successors, Khenpo Tsultrim Lodrö (who visited CU Boulder in April 2015) has spearheaded this movement, and its implementation is being conducted by local monasteries in the region through mass vow-taking ceremonies. I discuss this movement in my article, "Reimagining Buddhist Ethics on the Tibetan Plateau" in the Journal of Buddhist Ethics (2013)  and the controversy it has sparked in "Controversy over Buddhist Ethical Reform" in the latest issue of the journal Himalaya (2016).

This photo essay shows the grand scale of Larung Buddhist Academy, with separate three-story buildings containing the respective assembly halls and classrooms for monks and nuns, thousands of monastic residences scattered across its hillsides, and the shimmering "magical illusion" (sgyu 'phrul) temple at the top of the ridge. I trace a route from Golok to the north, which I have traversed numerous times in the past ten years in visiting monasteries in the region. The photos begin in the county seat of Padma and follow a dirt road through the grasslands until reaching Serta and finally Larung Buddhist Academy. 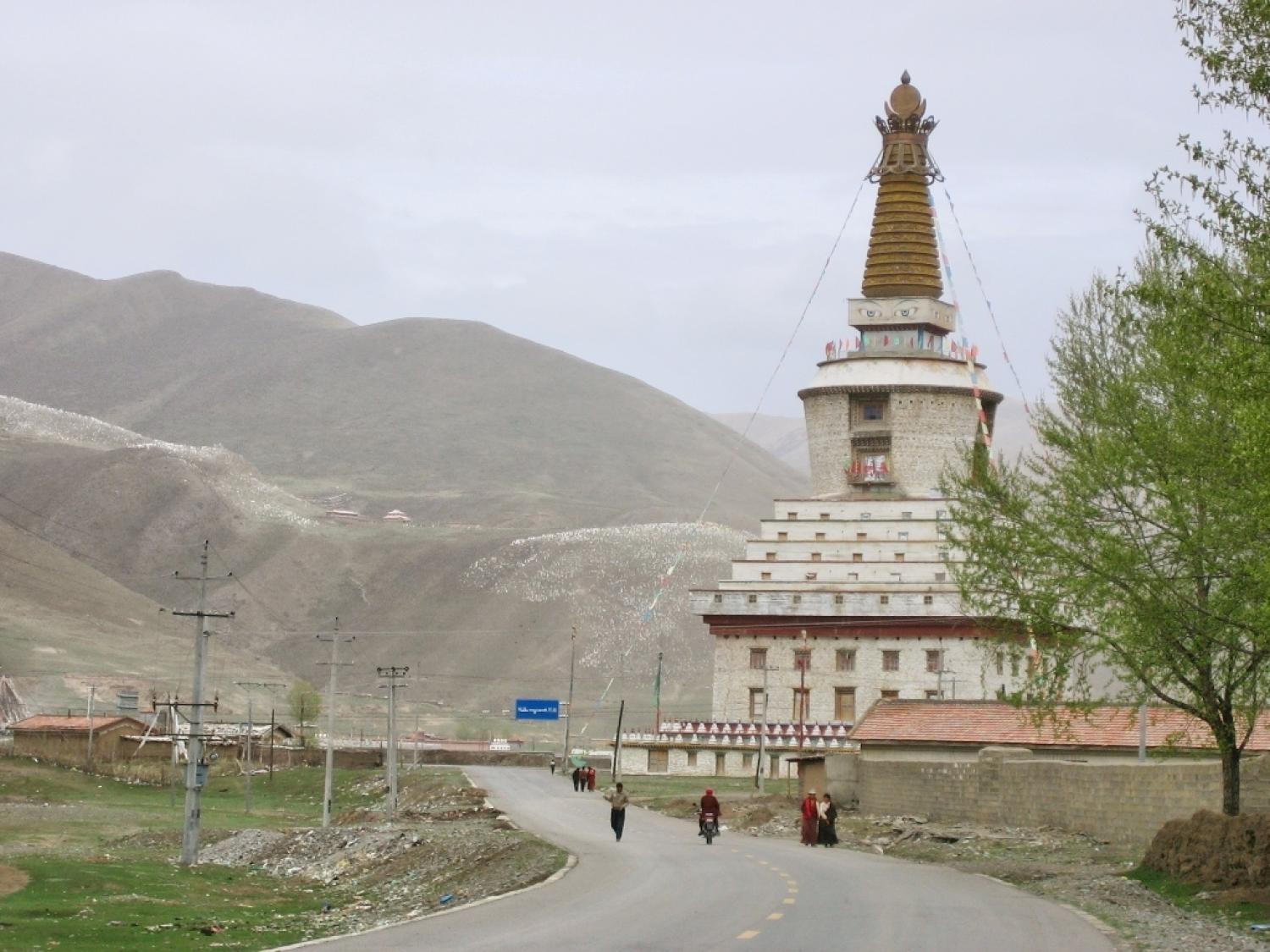 Stupa at County Seat in Padma

This large stupa stands at Silethang, the seat of Padma County, where residents visit to circumambulate and recite prayers. 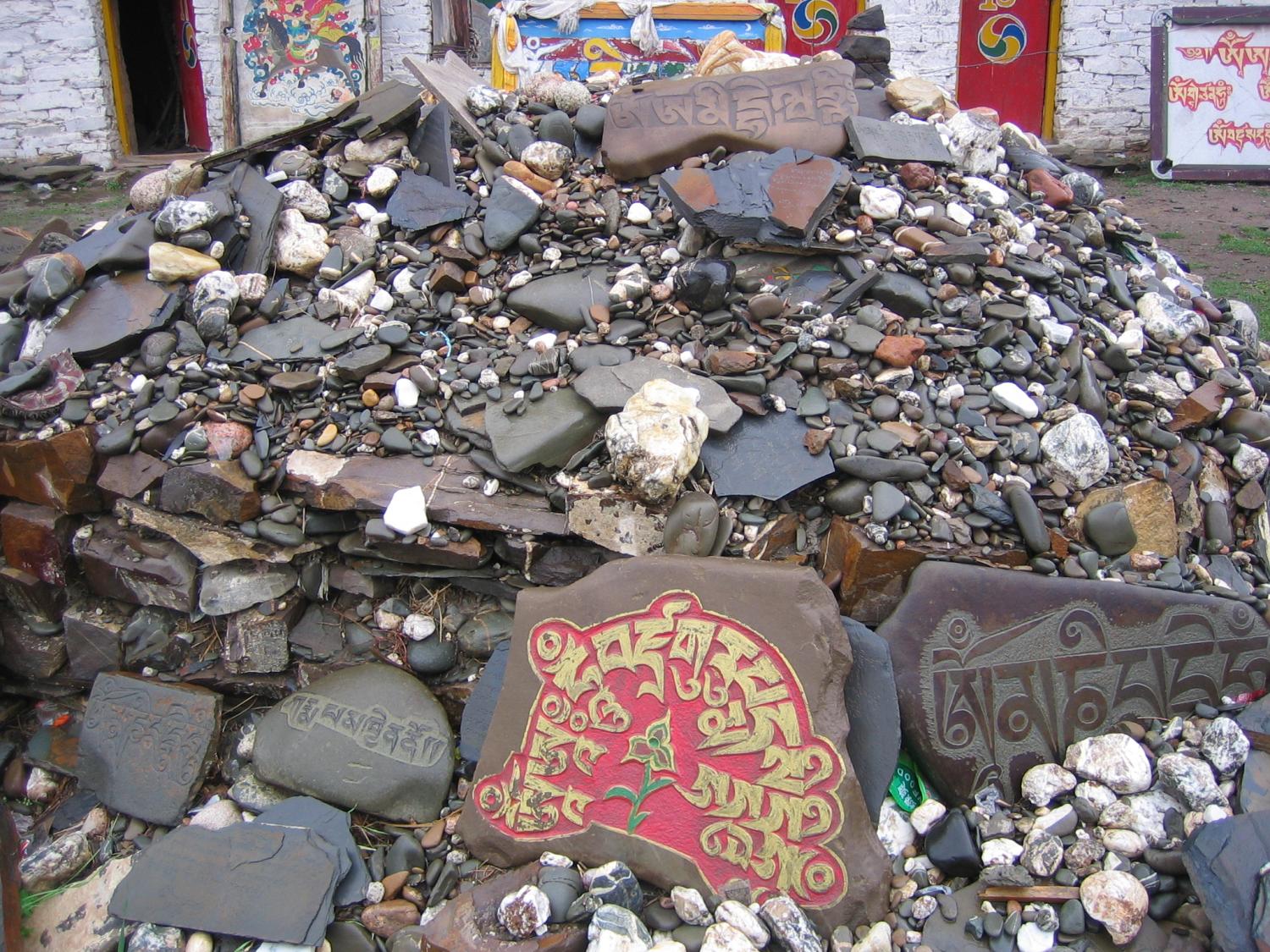 Mani Stones next to the Stupa

Stones with mantras and prayers encraved on them are heaped next to the stupa. 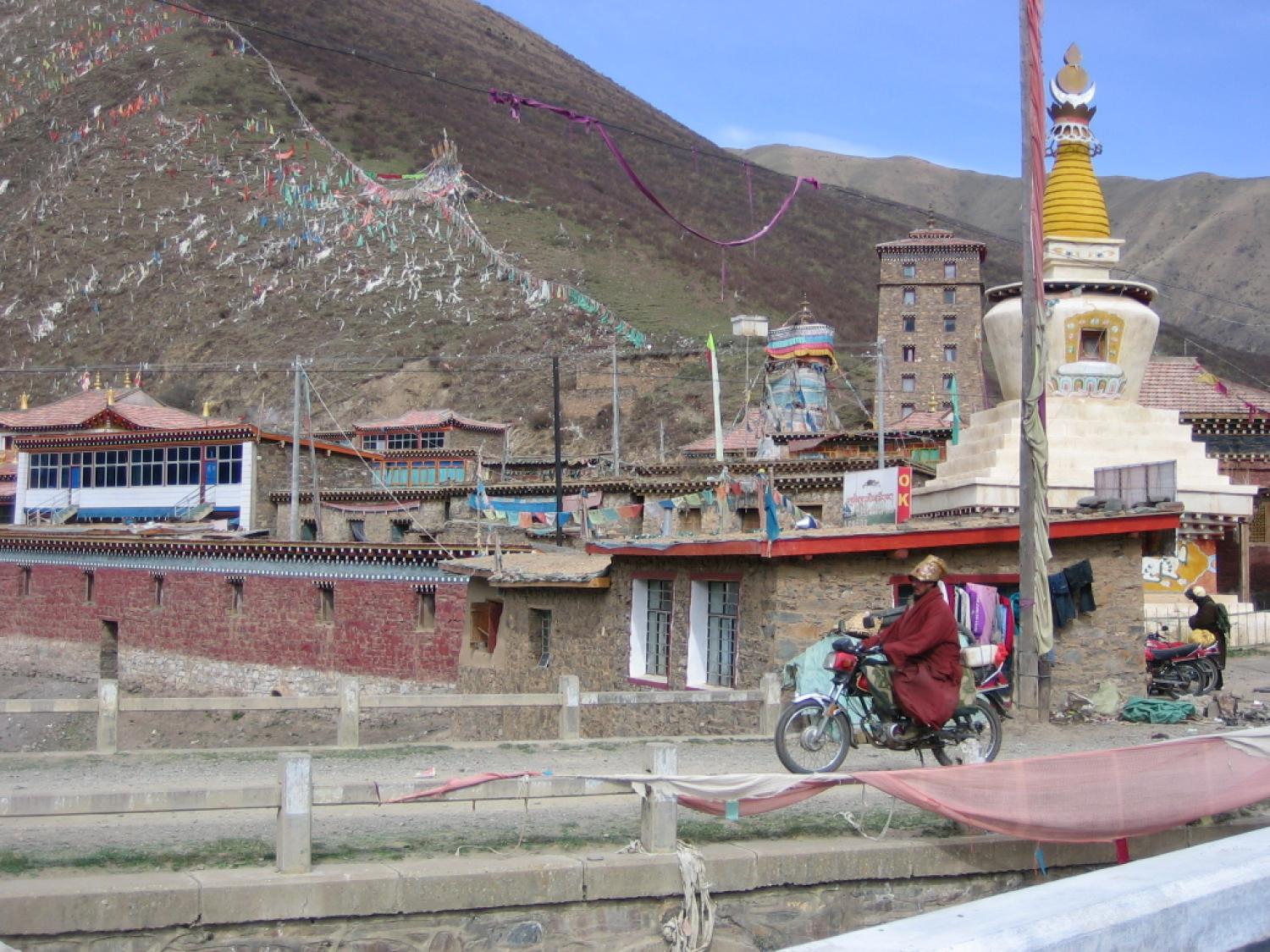 Road near the Seat of Padma County

Near Silethang, a monk on a motorcyle turns off the main road to traverse alongside the Mar River. 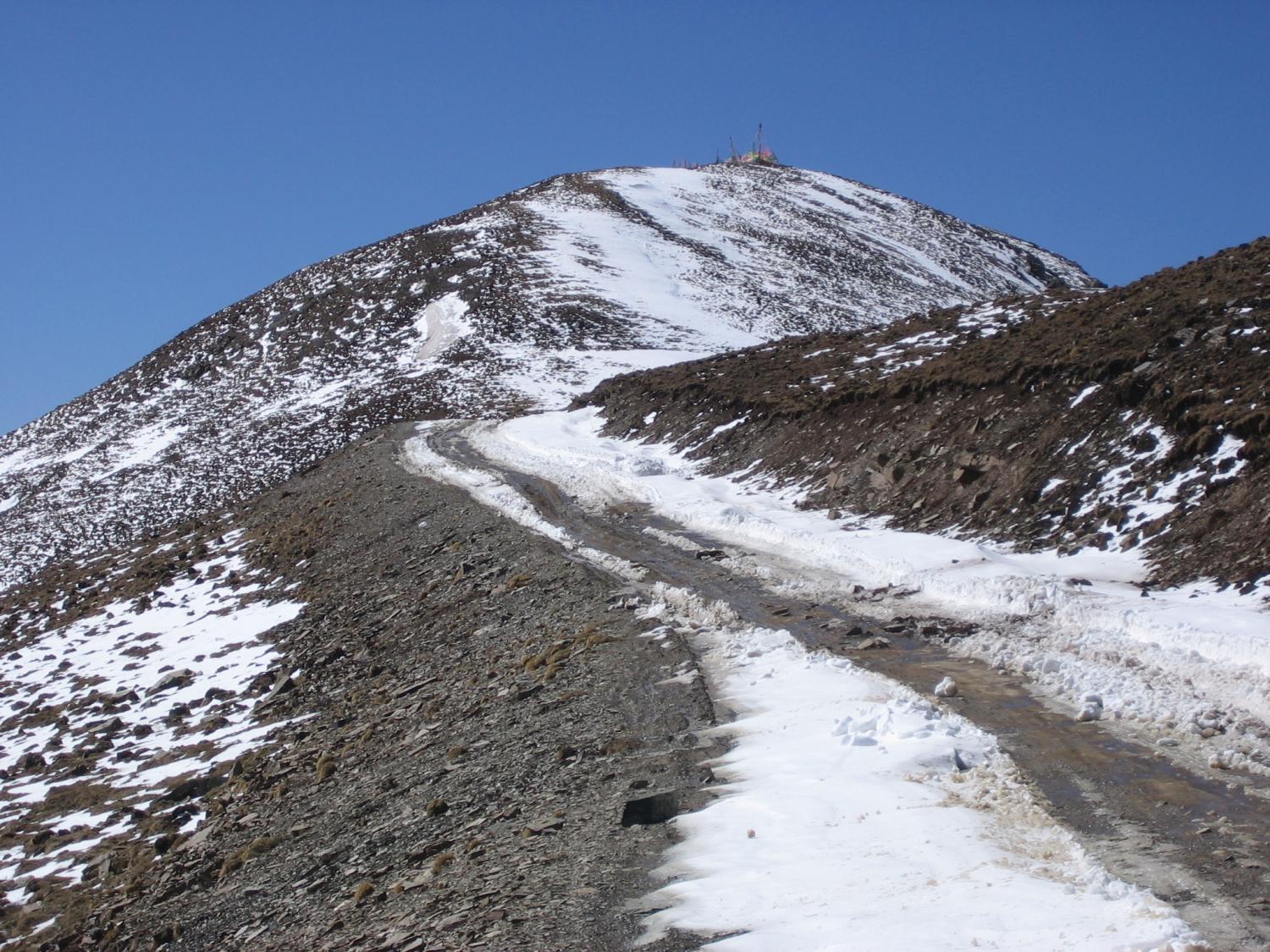 Mountain Pass on Road from Padma to Serta

A mountain pass along the road between Padma and Serta Counties with views as far as the Nyenpo Yutse mountain range. 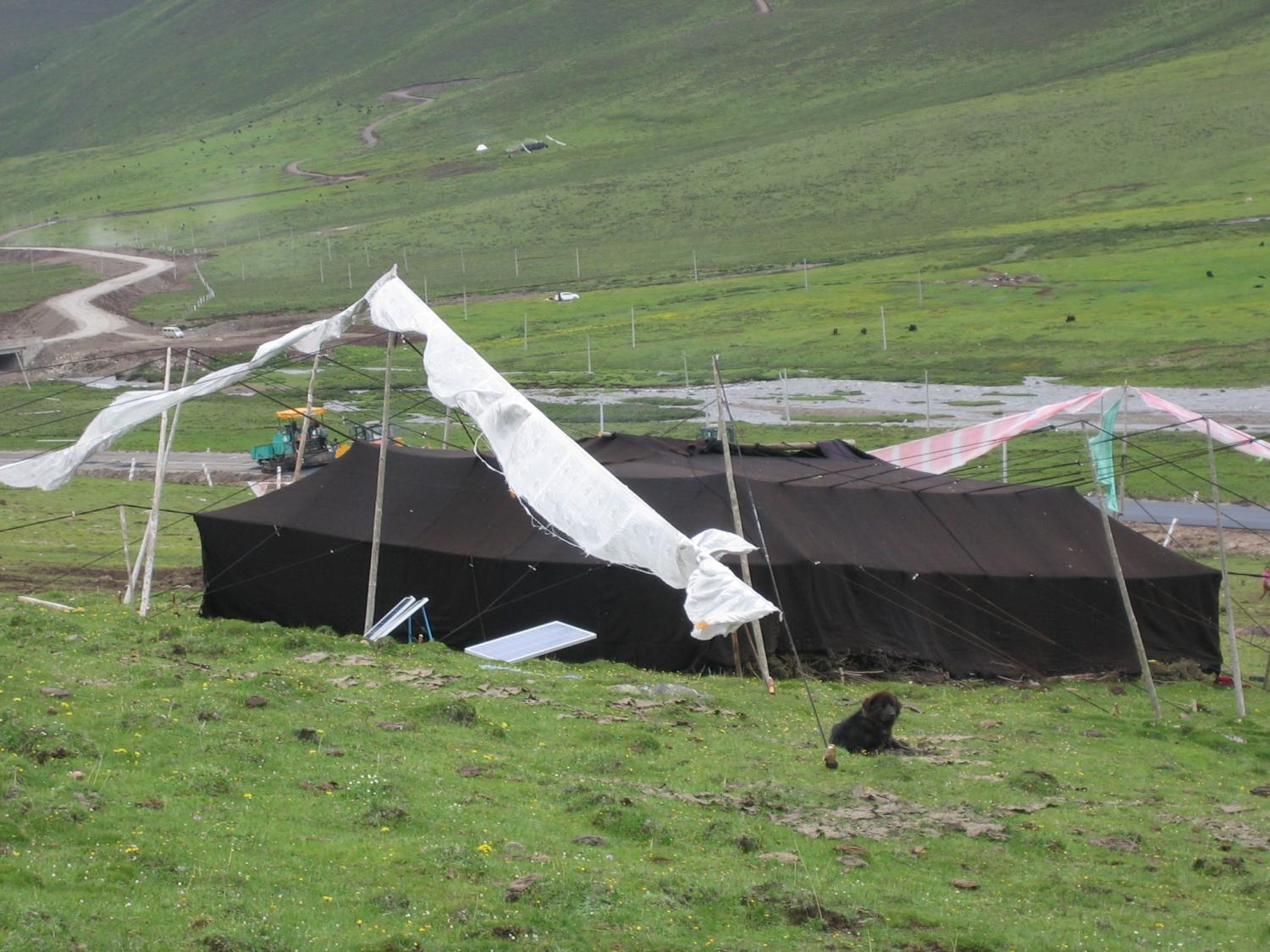 Black Tent on the Grasslands

A nomadic black tent on the grasslands along the road with a Tibetan mastiff standing guard. 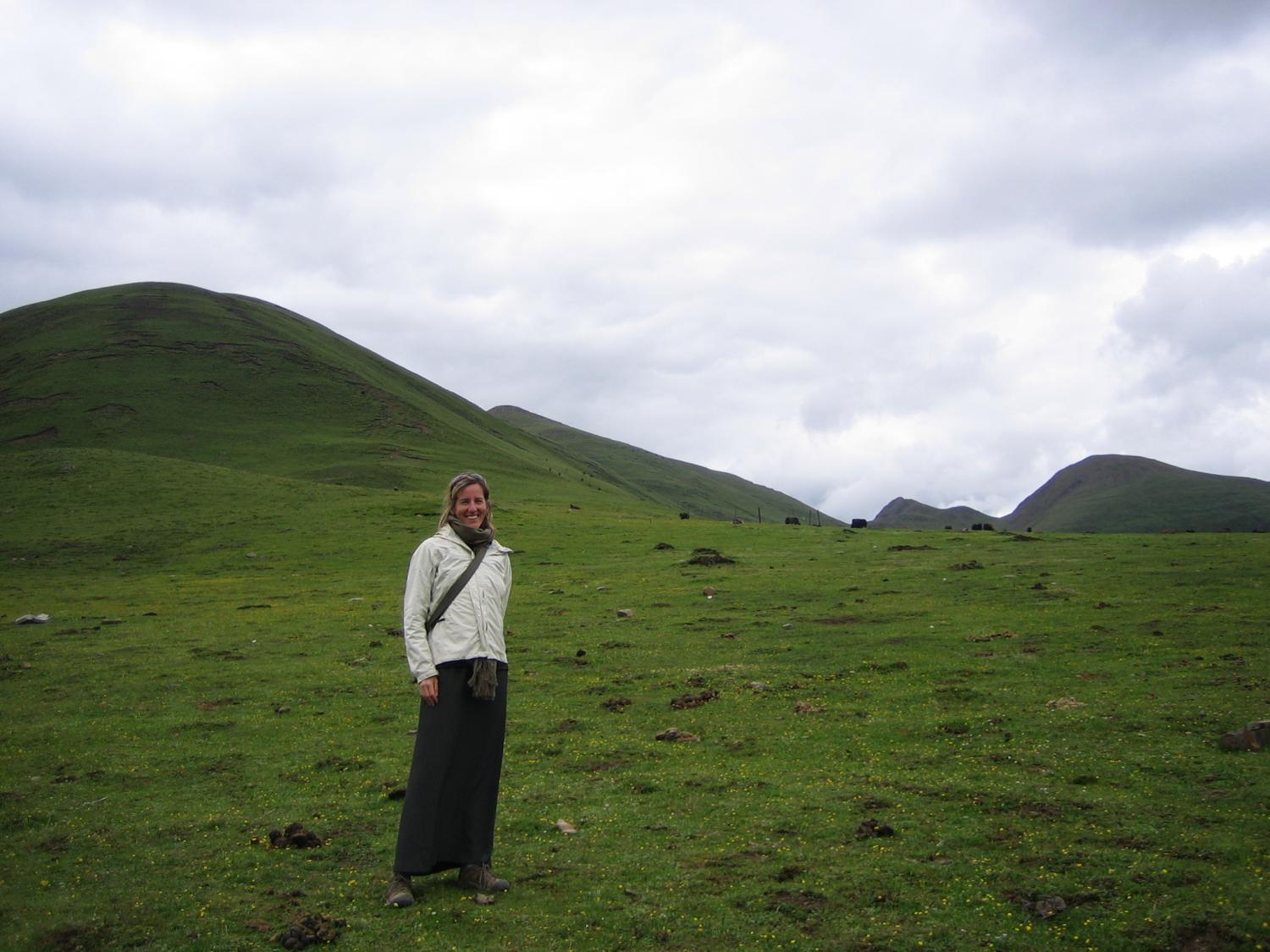 CU Professor on the Grasslands

En route Holly Gayley in Religious Studies takes a stroll along the grasslands. 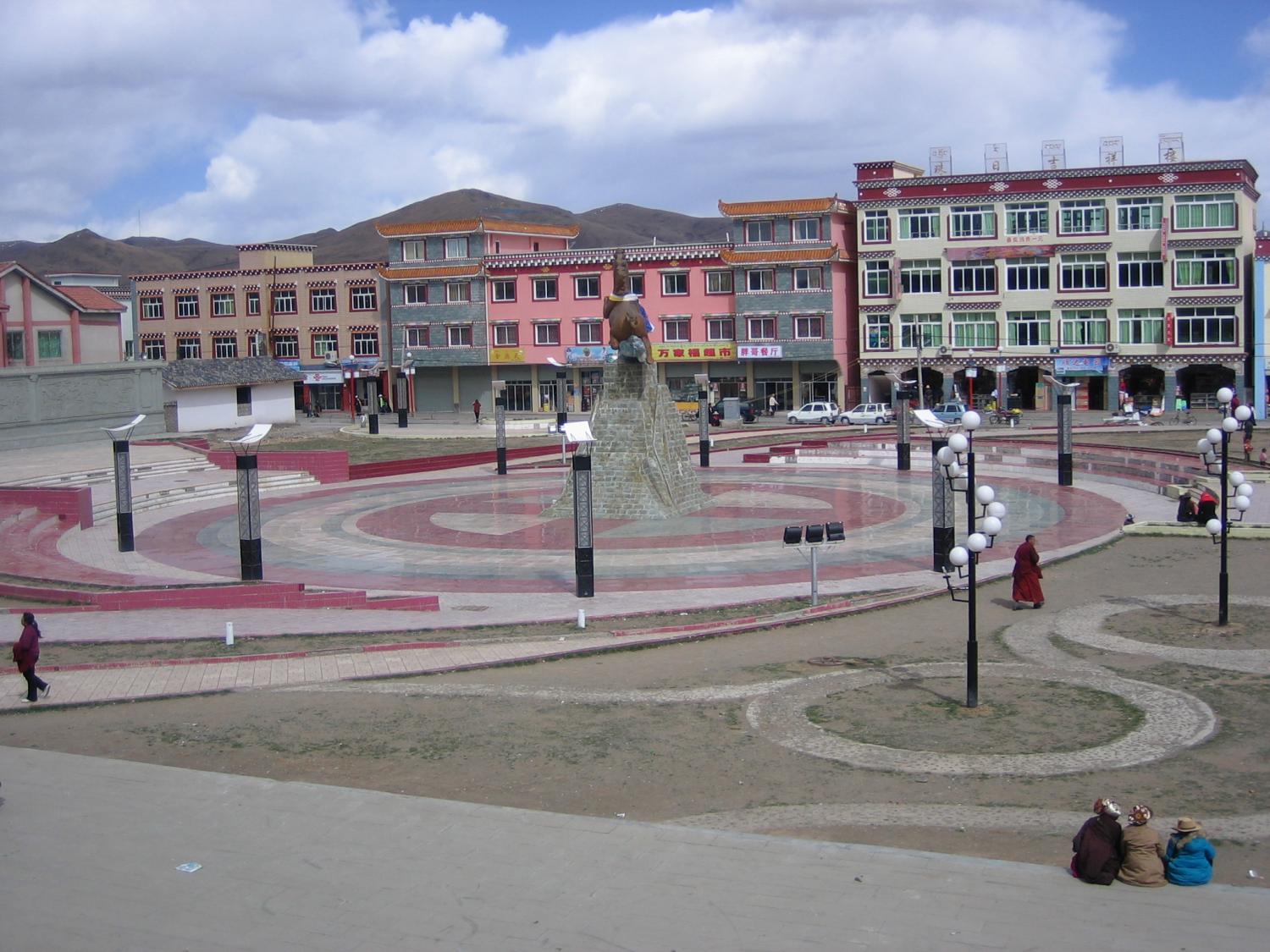 Plaza in County Seat at Serta

This is the main plaza in the county seat at Serta with local shops around the perimeter. 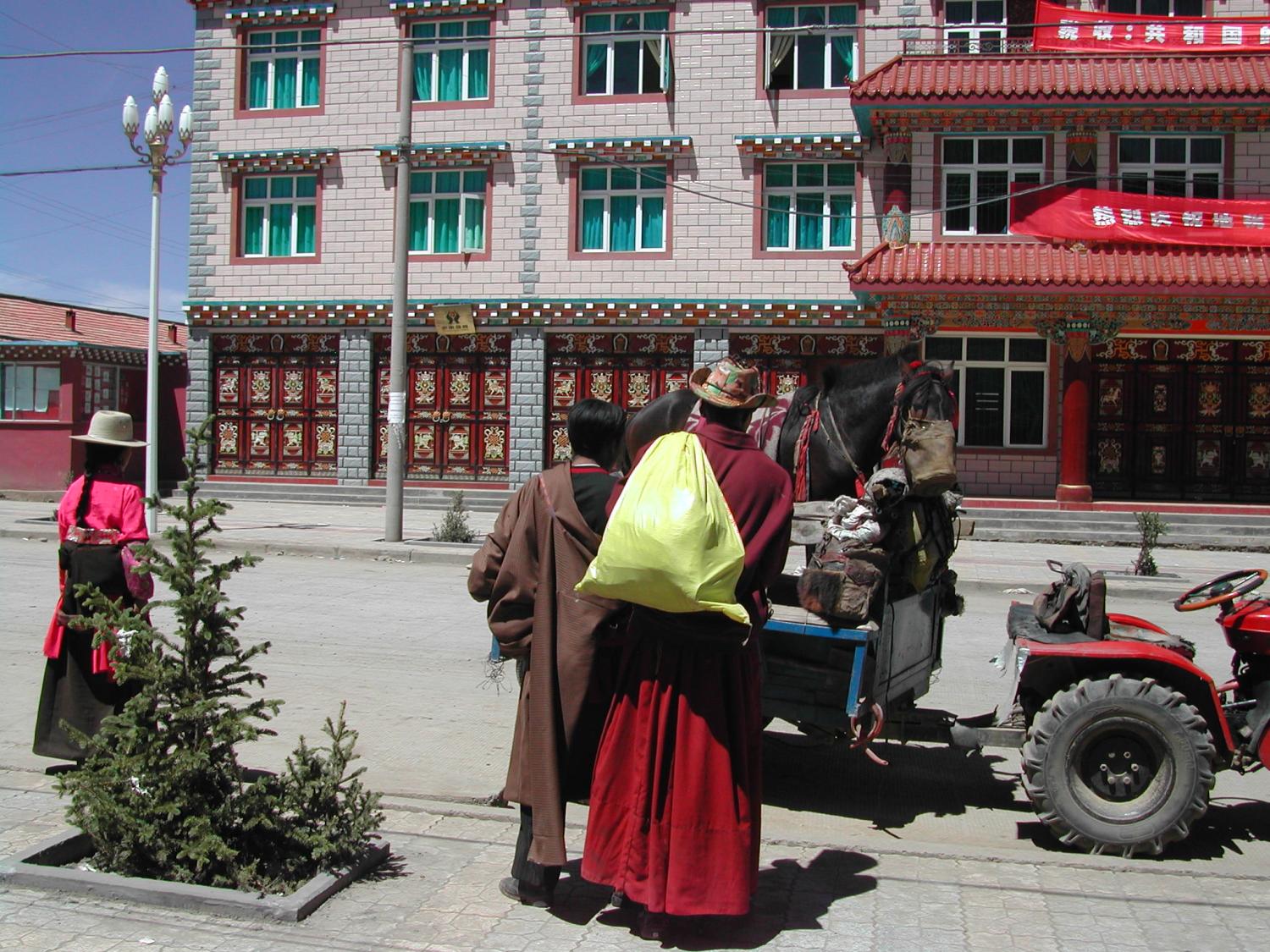 Nomads load goods onto a tractor to transport home. 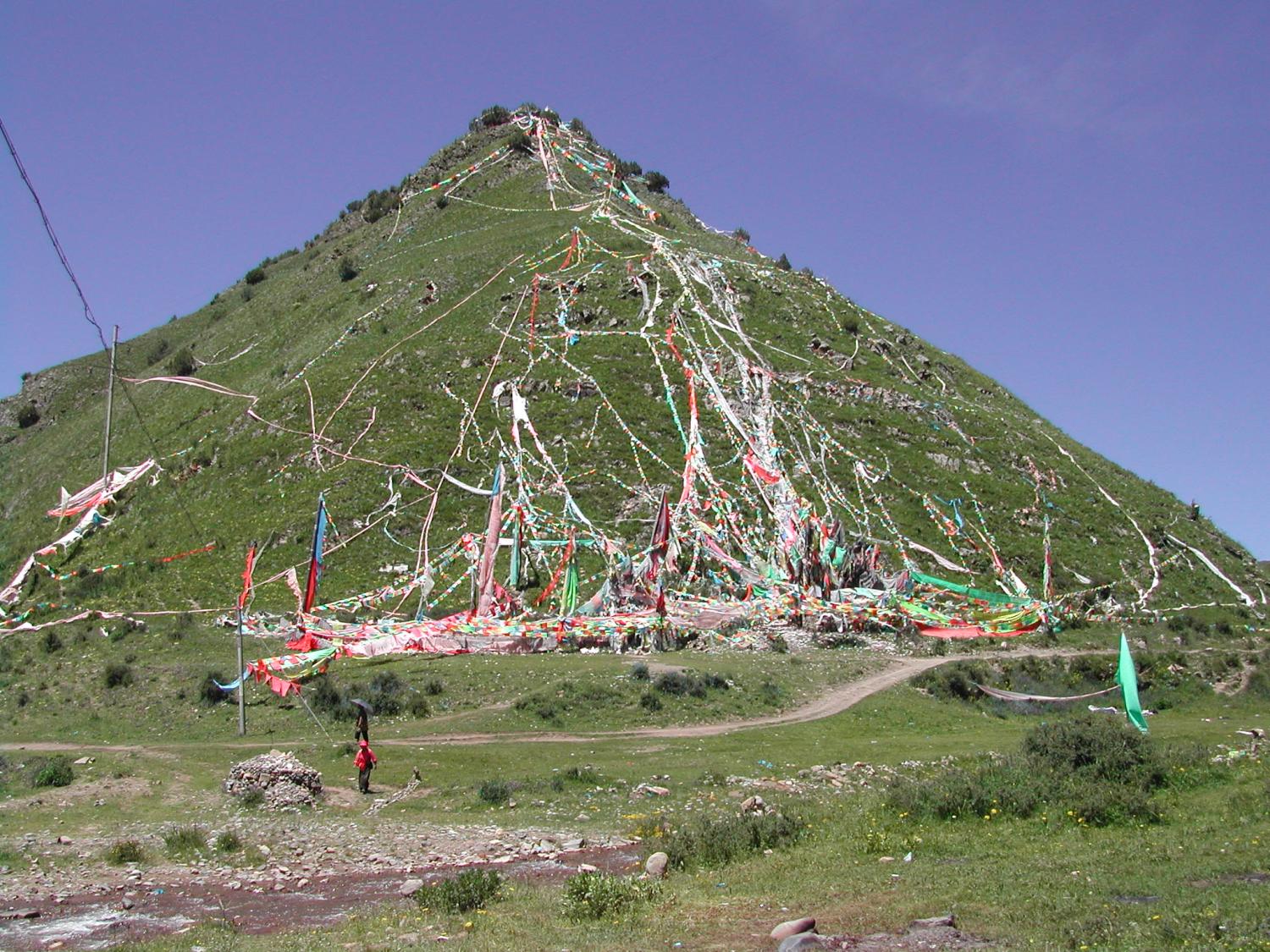 Along the road from Serta to Larung Buddhist Academy is this small sacred mountain, covered in prayer flags. 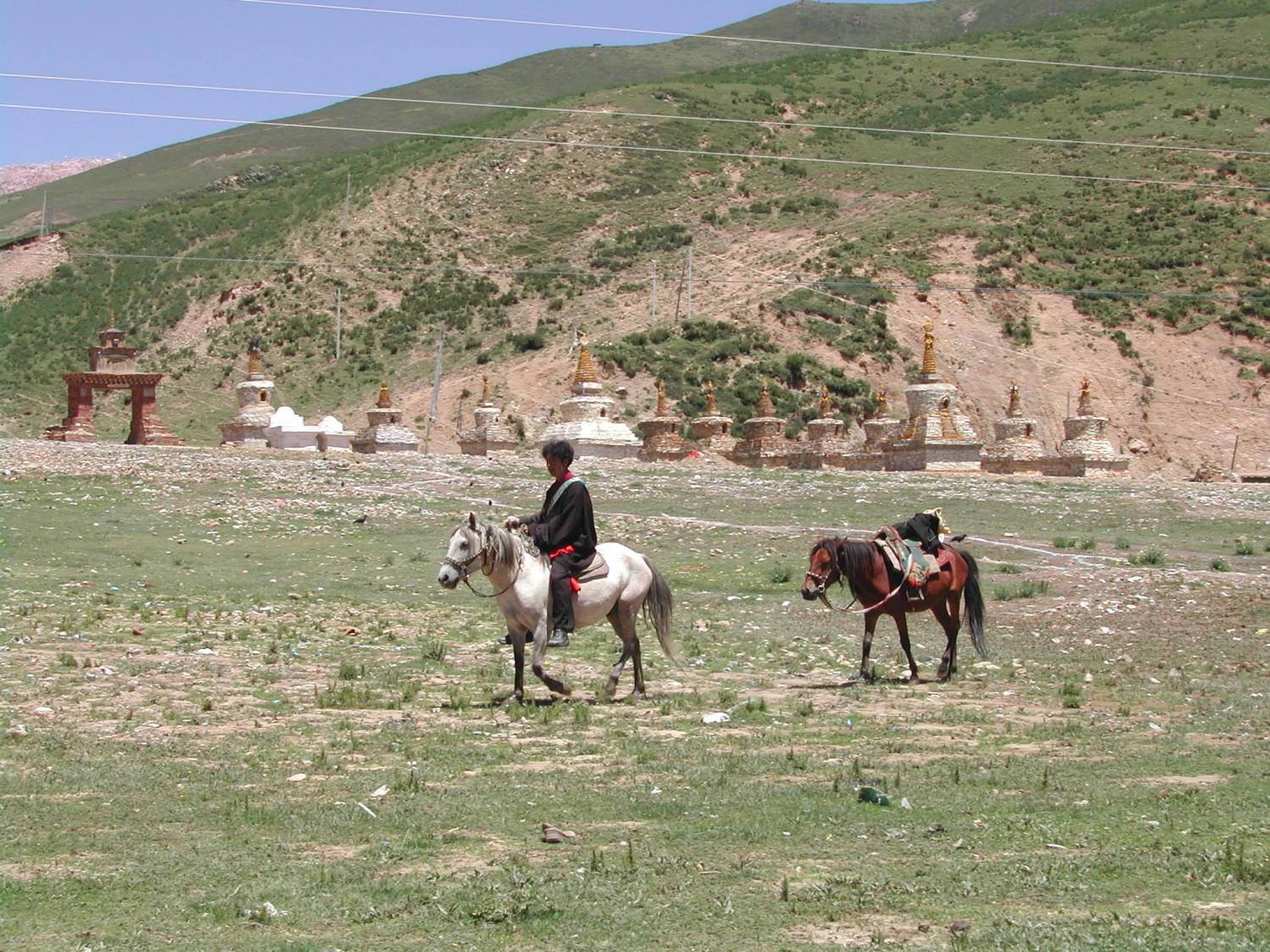 Outside the Gate to Larung Gar

A young Tibetan rides a horse nearby the gate to Larung Buddhist Academy (also known as Larung Gar). 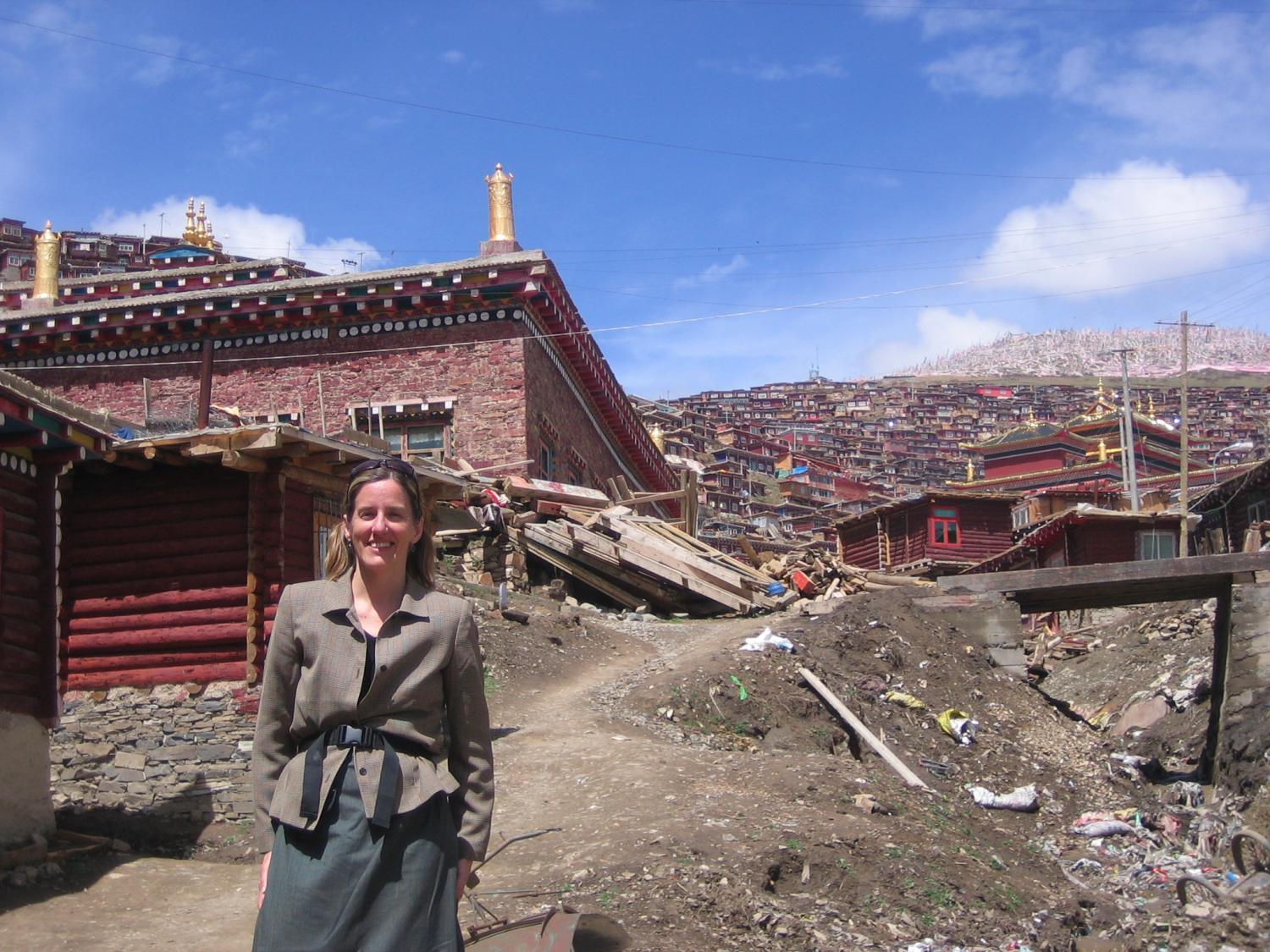 Walking up the Hillside into Larung Gar

Larung Gar opened to foreigners sometime around 2010, after having restricted access for almost a decade. 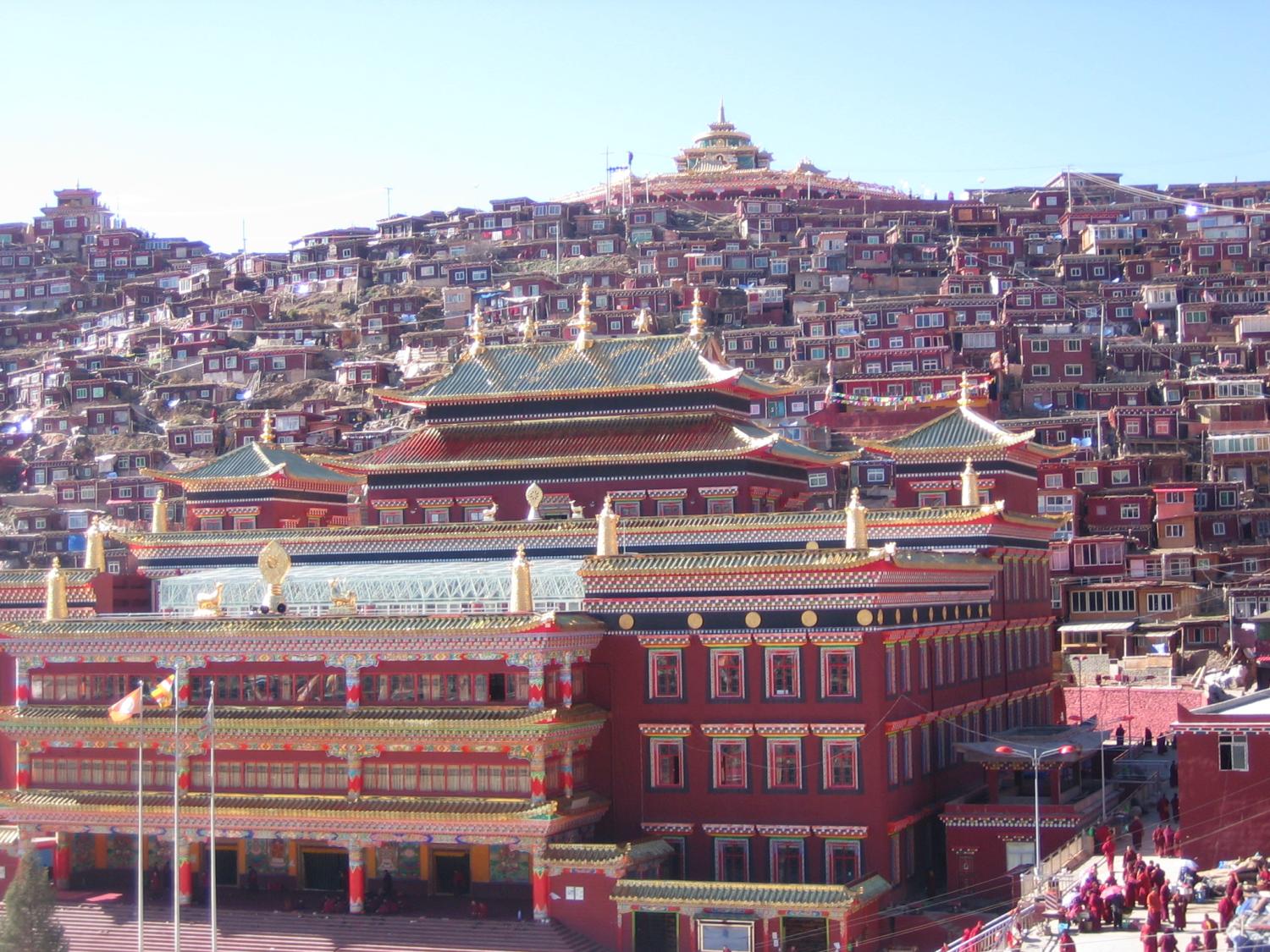 Nuns worked for years on the construction of this three-story main assembly, which survived a 2014 fire in nearby nun's residences. 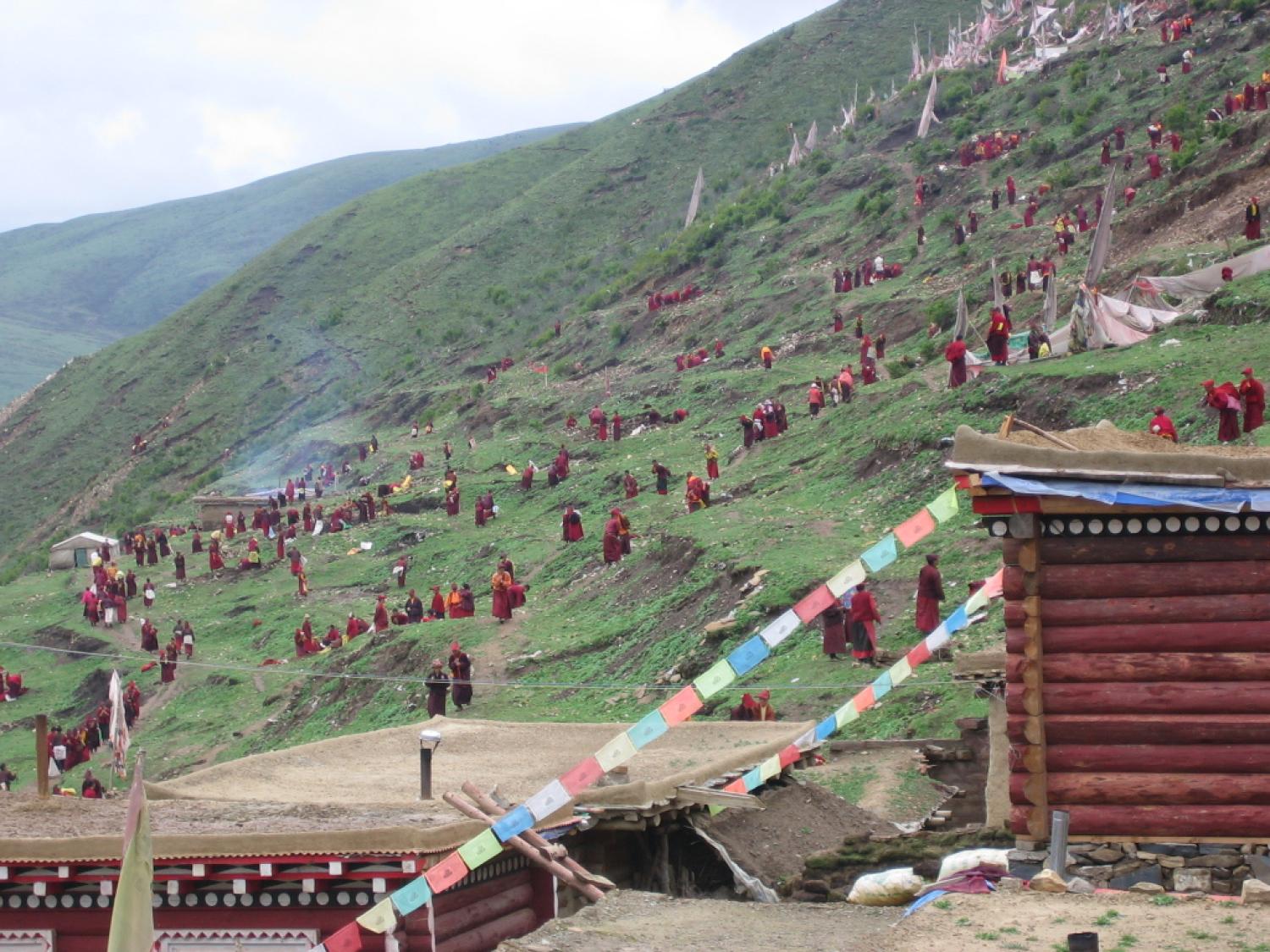 Nuns walking back to their residences after a day of practice and study. 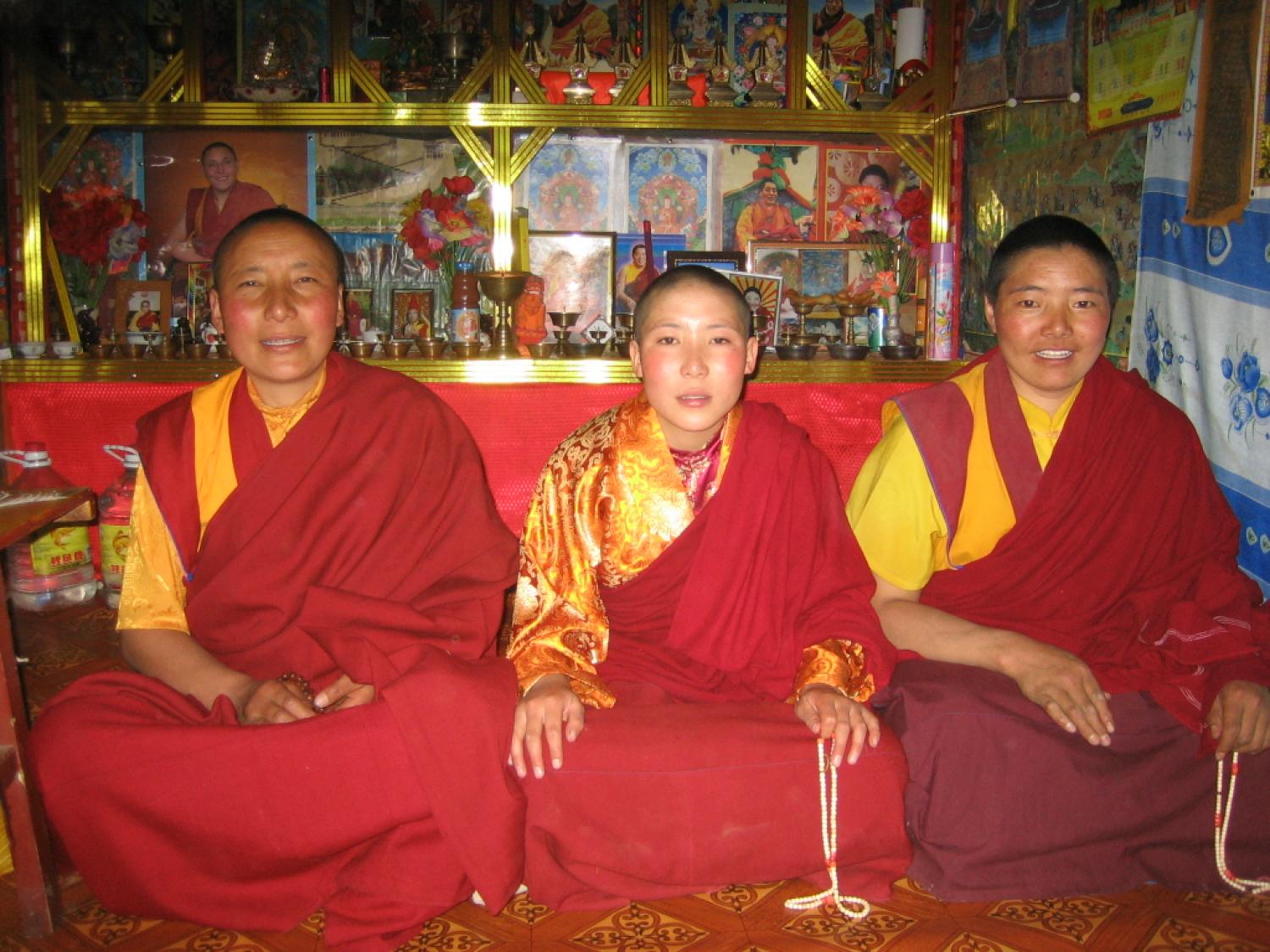 Nuns in their Quarters

A group of nuns in the private residence of Tsogyal (left) reciting mantras in front of the shrine. 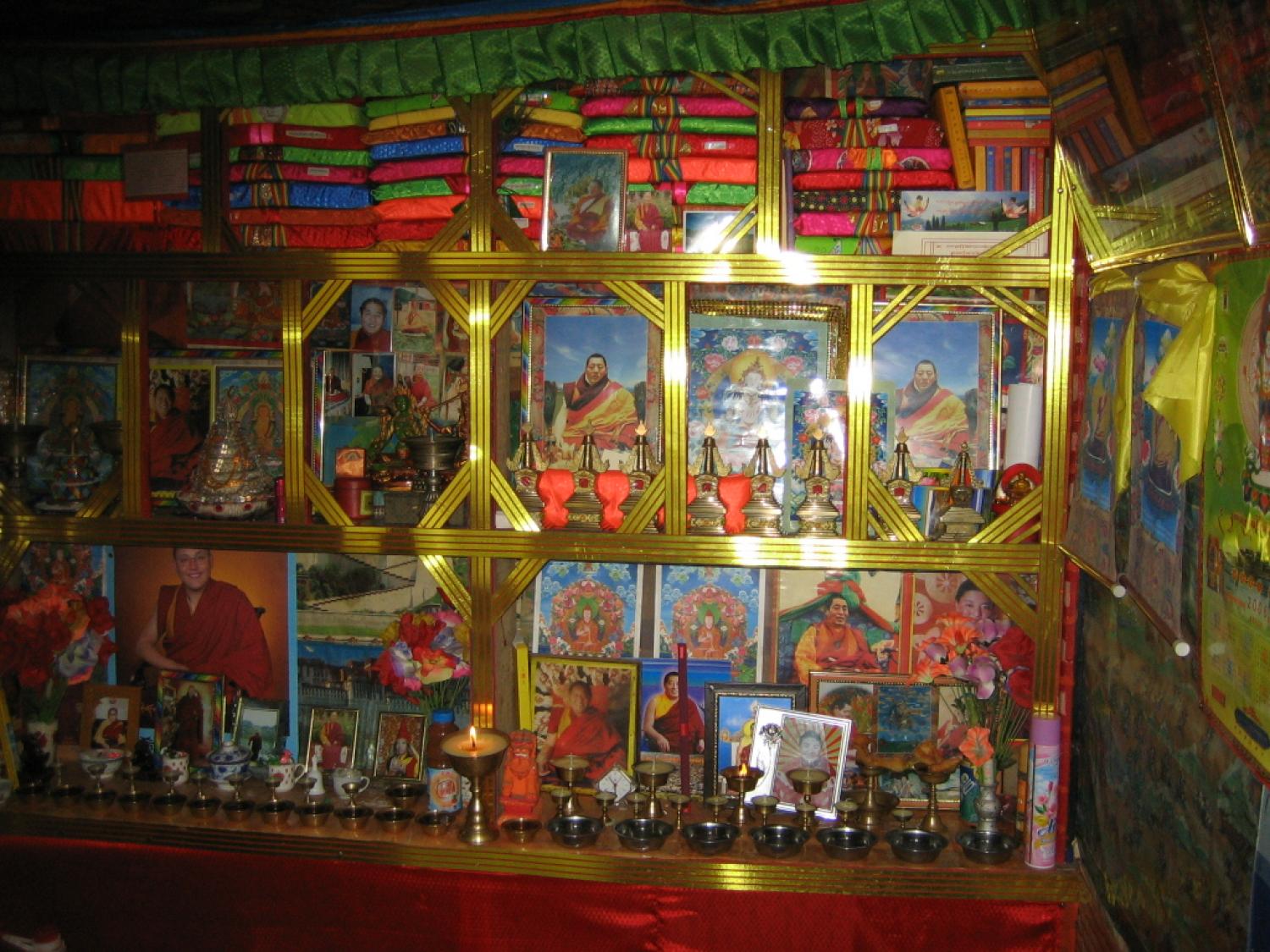 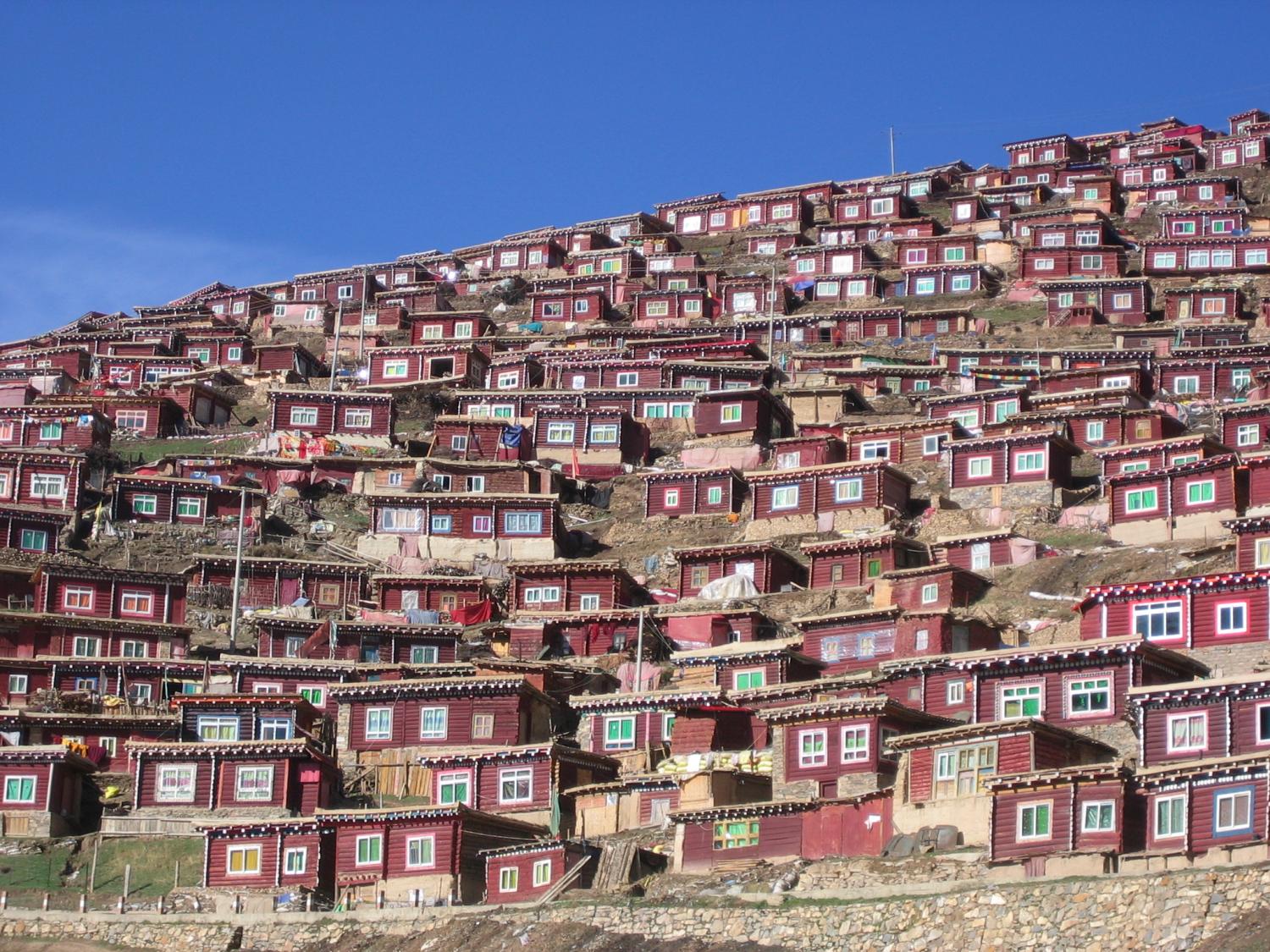 Monastic Residences Along the Hillside

Residences for monks and nuns line the hills on all sides of the valley at Larung Gar. 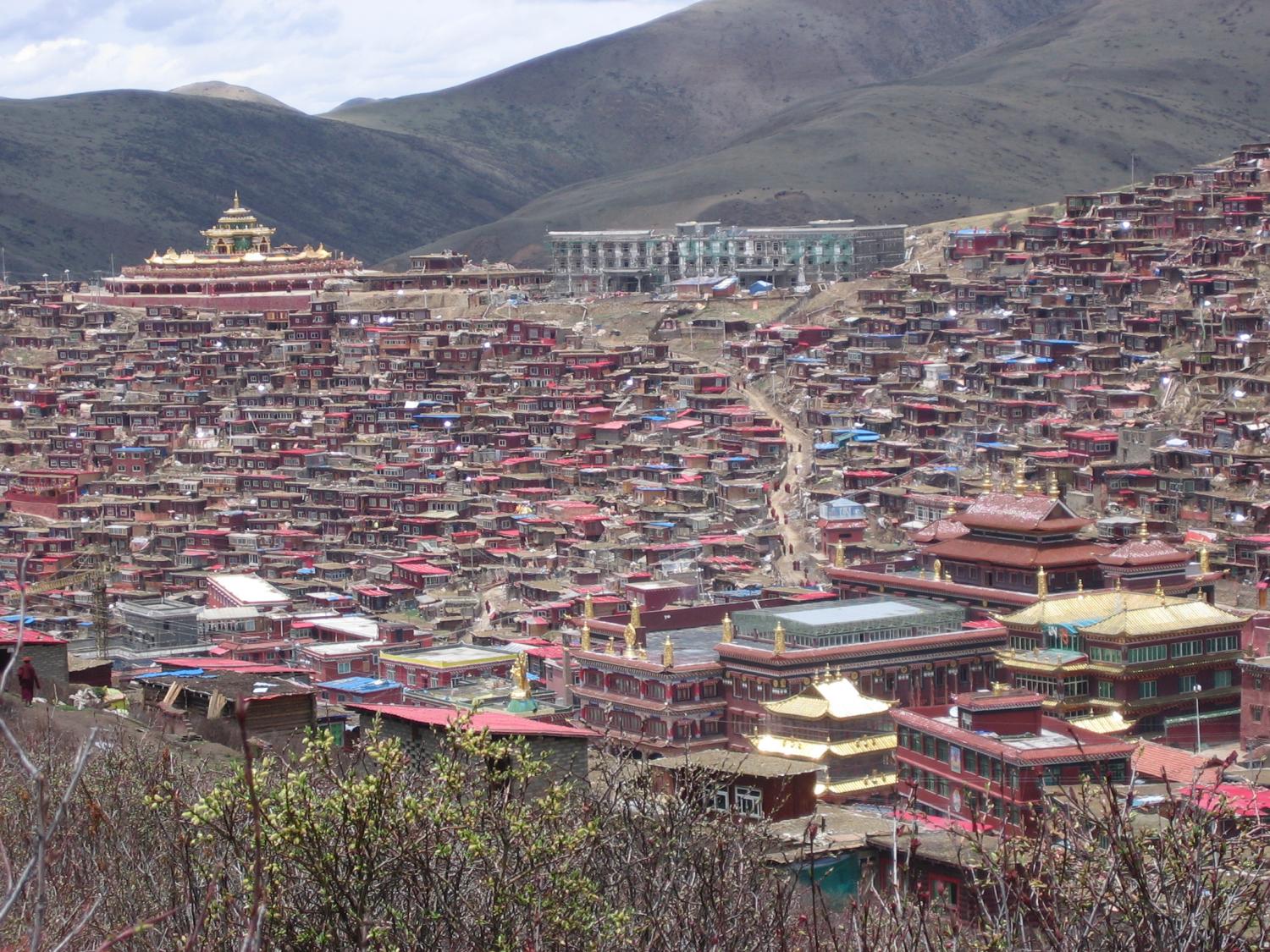 Panorama of Larung Gar with the Jutrul (or "magical illusion") Temple at the crest of the ridge. 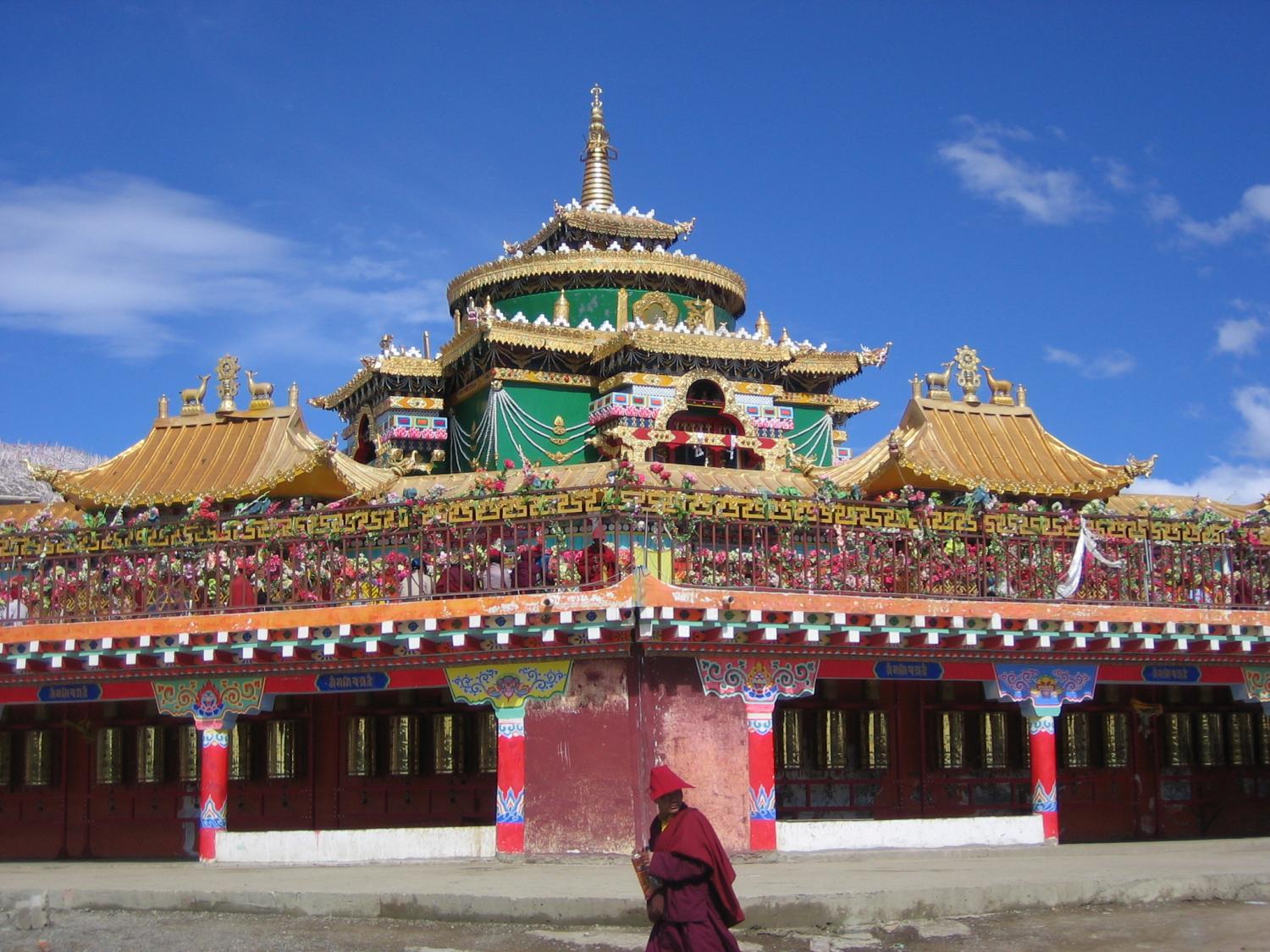 The distinctive Jutrul Temple stands at the crest of the ridge overlooking Larung Buddhist Academy. 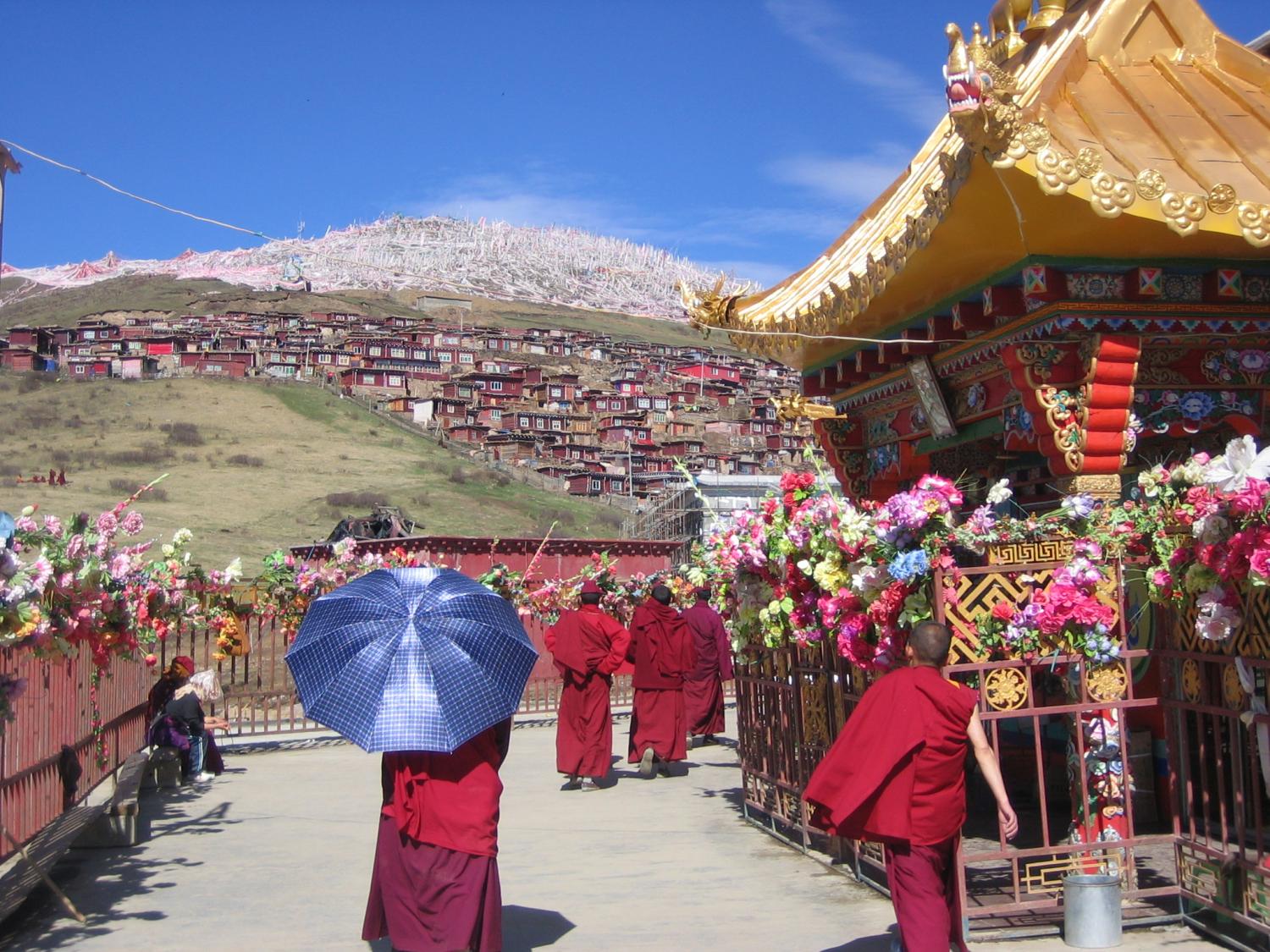 Monastics and laity alike visit the Jutrul Temple in order to circumambulate it as a merit-making practice. 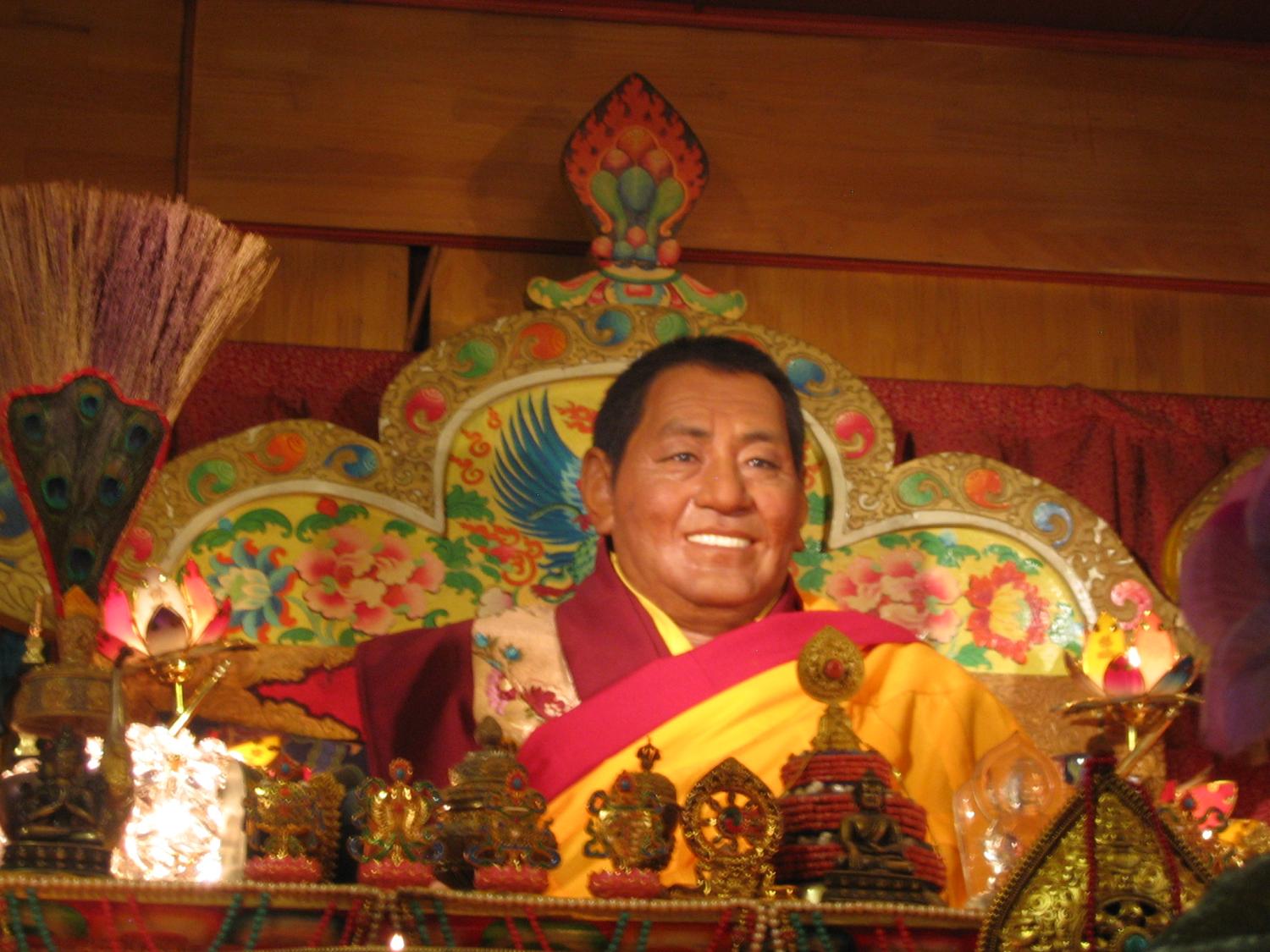 Above the Main Assembly Hall for monks is a commemorative shrine dedicated to Khenpo Jigme Phuntsok with this life-like statue. 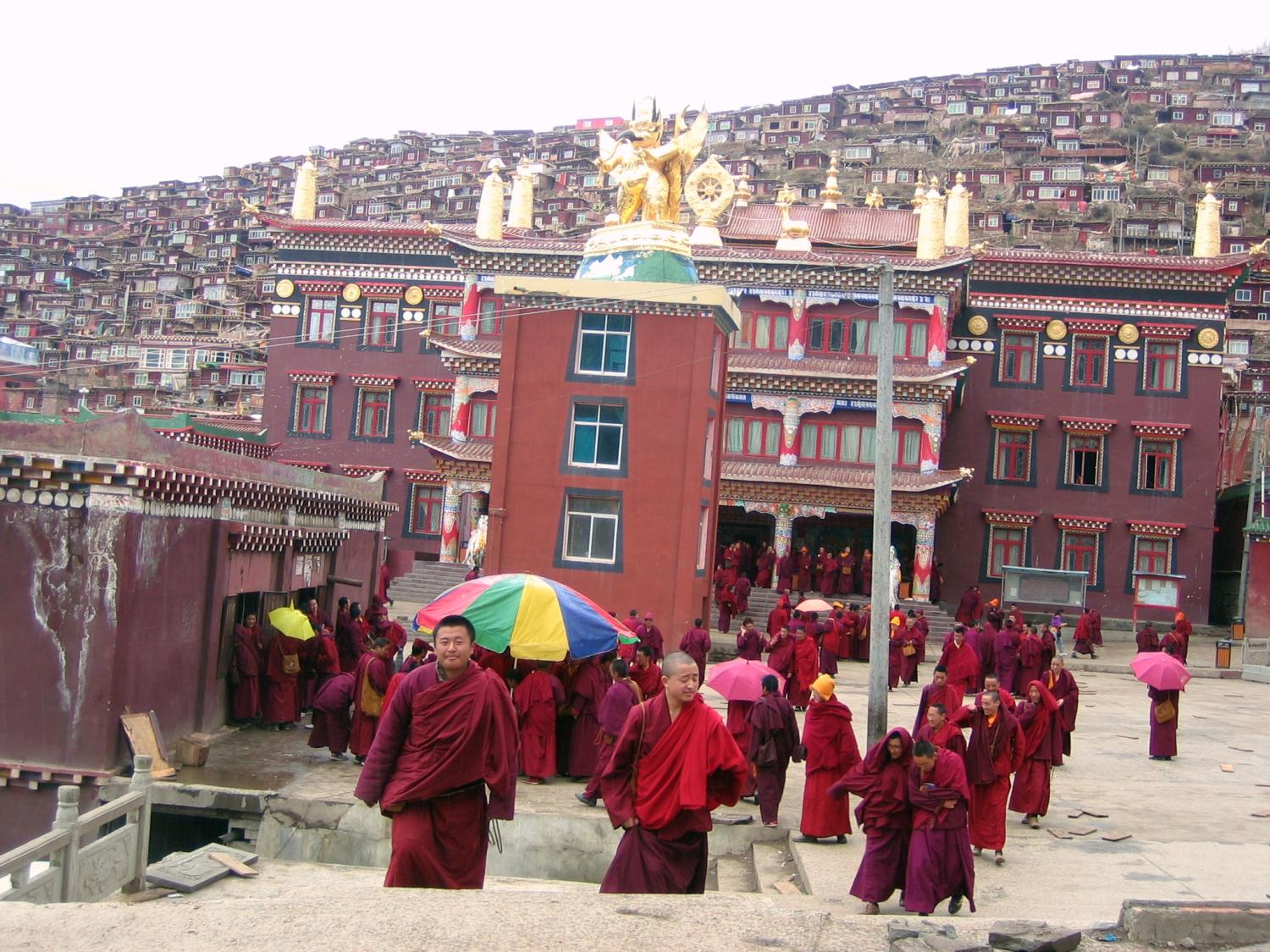 Monks taking a mid-day break in their practice and study, emerging from the Main Assembly Hall (or lhakhang). 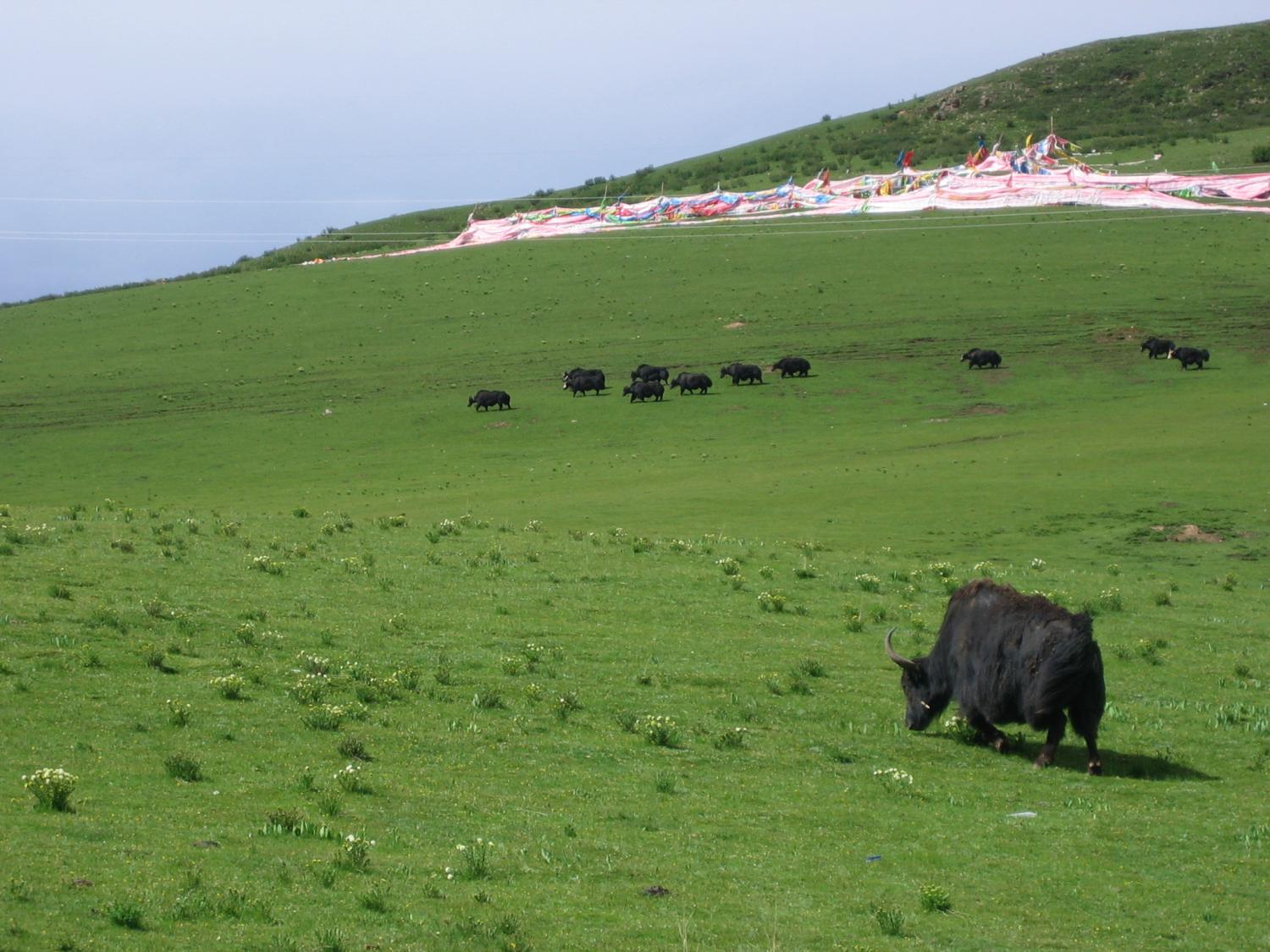 In a nearby valley, yaks graze on the hillside.