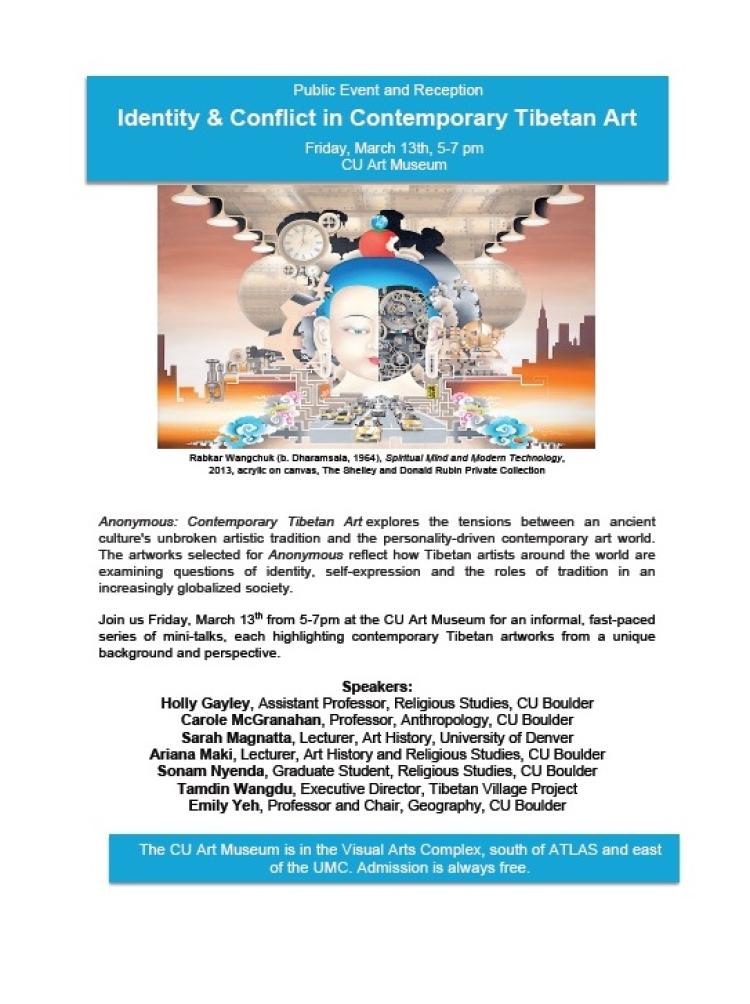 Through the initiative of Ariana Maki, the CU Art Museum had the distinction of hosting the acclaimed "Anonymous" exhibit from the Rubin Art Museum in New York, February 14 - May 9, 2015. "Anonymous" is a collection of contemporary Tibetan art that explores the tension between an ancient culture’s unbroken artistic tradition and the personality-driven world of contemporary art. The artworks selected for "Anonymous" reflect how Tibetan artists around the world are examining questions of identity, self-expression, and the role of tradition in an increasingly globalized society. This show, curated by Rachel Weingeist, has been traveling for the last few years and has generated much interest and acclaim.

Due to the sizable Himalayan community living in and around Boulder, as well as Naropa, and general community interest, Anonymous was a hugely successful show. In addition to the opening on February 14th, there were a series of public events during the exhibit. For example, "Identity & Conflict in Contemporary Tibetan Art" (flyer shown here) involved an informal-fast paced series of mini-talks highlighting 1-2 works in the show from diverse perspectives. Speakers included Holly Gayley in Religious Studies, Carole McGranahan in Anthropology, Sarah Magnatta from University of Denver, Ariana Maki in Art & Art History, Sonam Nyenda in Religious Studies, Tamdin Wangdu of the Tibet Village Project, and Emily Yeh in Geography.

The "Anonymous" exhibit followed in the wake of the landmark 2006 exhibit, "Waves on the Turquoise Lake: Contemporary Expressions of Tibetan Art," the first exhibit to bring together contemporary art by Tibetans working inside and outside of Tibet. The exhibit was hosted by the CU Art Museum in conjunction with the Mechak Center for Contemporary Tibetan Art and organized by Lisa Tamiris Becker, Losang Gyatso, Carole McGranahan, and Tamar Victoria Scoggin.