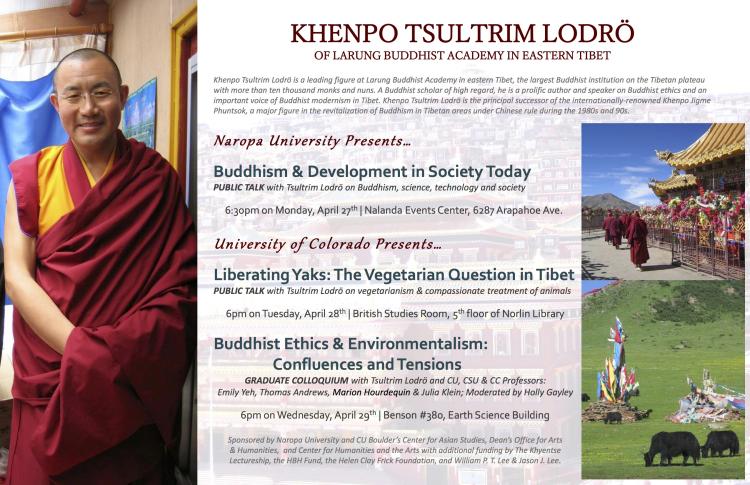 In April 2015, we had the honor of hosting two events with Khenpo Tsultrim Lodrö on his first visit to the US on a tour of a handful of major universities, including Harvard, University of Virginia, George Washington University, and Columbia. A renowned cleric-scholar from Larung Buddhist Academy, Khenpo Tsultrim Lodrö is a prolific author and speaker on Buddhist ethics, a passionate advocate for animal welfare, and an important voice of Buddhist modernism in Tibet. His lecture "Liberating Yaks: The Vegetarian Question in Tibet" on April 28th focused on the importance of vegetarianism for the practice of compassion, discussing its place in traditional Buddhist ethics and also linking animal rights to human rights.

The second event, held on August 29th was a graduate colloquium and panel on "Buddhist Ethics & Environmentalism: Confluences, Tensions. In this colloquium, Khenpo Tsultrim Lodrö dialogued with a panel of researchers who approach questions of ethics, religion and the environment from a variety of perspectives. Moderated by Holly Gayley, the panel featured Emily Yeh, a professor in the Department of Geography at CU Boulder; Julia Klein, an ecosystem ecologist who works on the Tibetan Plateau at Colorado State University; Thomas Andrews, professor of environmental history at CU Boulder; and Marian Hourdequin, professor of environmental ethics at Colorado College.

As part of the visit, Naropa University hosted a public lecture on "Buddhism and Development in Society Today" on August 27th.

Sponsored by Naropa University and CU Boulder’s Center for Asian Studies, Dean’s Office for Arts & Humanities,  and Center for Humanities & the Arts with additional funding for the Khenpo's tour by The Khyentse Lectureship, the HBH Fund, the Helen Clay Frick Foundation, and William P. T. Lee & Jason J. Lee.