How people celebrate New Year’s around the world 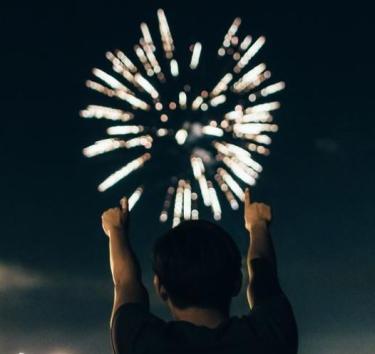 New Year’s traditions are a great way to reflect on the previous year and focus on hopes and plans for the coming year. Learn more about how New Year’s is celebrated in different parts of the world.

Germany. In Germany, depending on the region, there are two unique activities people take part in to celebrate New Year’s Eve. The first is watching an 18 minute black and white British comedy sketch called “Dinner for One,” where Miss Sophie celebrates her 90th birthday with her butler. A second tradition is pouring lead also known as Bleigießen. Using the flames from a candle, each person melts a small piece of lead or tin and pours it into a container of cold water. The shape that the lead or tin forms is said to reveal a person's fate for the upcoming year.

Brazil. One popular tradition among Brazilians is to spend New Year's Eve at the beach. On the beach, people often build small boats filled with gifts for the goddess of the ocean, Yemanja. If the boat doesn't come back to shore, it's believed she will honor their request for the new year. People wear white in belief that the new year will bring peace and positive vibes. They also wear brand new underwear (bought for the occasion) of a specific color, depending on what they hope from the new year: yellow symbolizing gold, will bring money, red or pink will bring love, green will bring hope and blue will bring health.

Philippines. In the Philippines, one way to celebrate the coming year is with a fruit bowl. There is preparation or display of 12 different round fruits at the dining table on New Year’s Eve to wish everyone prosperity for the new year ahead! The round fruits symbolize wealth, just like the shape of coins and the 12 fruits correspond to each month of the year. The 12 fruits are then eaten in the following few days.

Spain. In Spain, the new year starts off with eating 12 grapes. The grapes symbolize each strike of the clock before the new year begins. This tradition, also practiced in other countries like Mexico, started in the 19th century and was believed to ward off evil. Eating the 12 grapes is said to bring you prosperity and good luck in the new year.

Lunar New Year. In many Asian countries, including China, Vietnam and South Korea, the Lunar New Year is celebrated. In 2021, the New Year will be welcomed on Feb. 12, which aligns to the Chinese lunar calendar. Although celebrations vary between each country, some have similar meaning. One includes giving money in red envelopes as the color red is associated with good fortune. Firecrackers are also set off to scare evil spirits.

Rosh Hashanah is the Jewish festival that marks the beginning of the Jewish New Year and usually falls in September or early October. Some of the traditions include the blowing of the shofar, a ram’s horn, which has many layers of symbolic meaning. Another is the lighting of candles on the first night of Rosh Hashanah. There is also the Tashlikh ceremony. Tashlikh is the symbolic act of throwing bread crumbs into a river or moving body of water to rid off your sins. Food is also a very important aspect of the holiday. Dipping apples in honey before the meal, is said to express the wish for people to have a sweet year ahead. The bread called Hallah is also dipped in honey, but for the new year, many Jewish people will bake their Hallah in a round loaf, instead of the long braid, to signify a round and full year.

Nepal Sambat. With more than 60 ethnic groups that make up Nepal, the country celebrates nine different New Year’s Days, but Nepal Sambat is considered the “national New Year.” The New Year will be on Apr. 14, and it is tradition for families to get together, wish themselves good luck for the year to come and enjoy each others’ company. Members of the Newari community take this day to celebrate oneself, as it is believed to cleanse and empower the soul.

Enkutatash. In Ethiopia, the celebration of Enkutatash lasts for three days. The day of the celebration happens on Sep. 11, unless it is a leap year calendar, in which it is celebrated Sep. 12. At this time, Ethiopians are part of church services, feasting, singing and more. Traditionally, it is said that families burn torches of dry wood in front of their house and sing hymns to ring in the New Year.