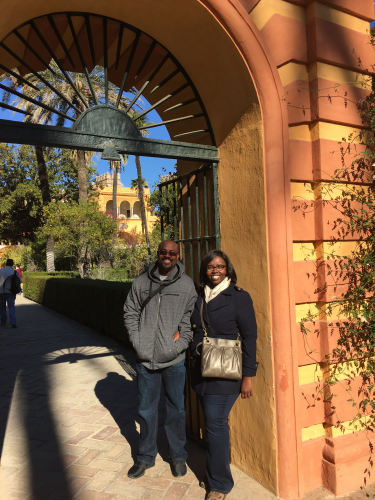 Aisha and her husband, Jelliffe Jackson, a senior aerospace instructor, during a pre-pandemic visit to Sevilla, Spain.

Aisha Jackson has stepped into a unique role at CU Boulder, a role that has been years in the making. After a decade of working to bridge academia and technology at CU by directing academic technology on campus, Jackson has become the university’s first assistant vice chancellor and assistant vice provost for academic and learning technologies.

“I see this position as bringing education and technology together to build partnerships between academic support units and business units,” Jackson said. “Our goal is providing academic technology for student success.”

The genesis of this new position began years ago when Jackson was training in college to be a teacher. During one of her practicum assignments, Jackson observed a trainer coaching a teacher on how to teach fourth-grade students to read. Over the course of the school year, Jackson observed how new teachers integrated the coaching techniques and critiques into their classroom methods.

At the time, she was interested in using technology in the classroom (laptops, tablets, hands-on learning tools, software, etc.) and wanted to explore it further. As Jackson observed the developments in those classrooms, she wondered if she could model the outcomes to support teachers using technology.

Jackson tucked that idea away in her back pocket. When she finished her bachelor’s degree and began teaching, she looked for a master’s program in educational technology where she could learn and develop similar types of coaching for teachers.

To fulfill the mission of the new position, Jackson will concentrate on three things:

“I want to broaden my perspective to think more broadly across the continuum of academic technologies,” she continued, “to understand what the shared campus needs are and then to implement best practices.”

It was probably inevitable that she would become an educator, Jackson said, describing two experiences that had an impact on her career choice.

When she was a little girl growing up in Panama, she would gather all her dolls, line them up as “students,” and teach school. She gave the dolls homework—and then she did the homework for them. She would grade their papers and even wrote notes to the dolls’ “parents” reporting on their progress.

“So, you see, I’ve always wanted to be a teacher,” she said, laughing. “But what really motivated me was watching my mom stay up late working with my brother on his homework. He really struggled. Seeing my brother’s learning problems motivated me to help children like him. My first degree specialization is in students with special needs.”

Jackson and her husband are enthusiastic world travelers. They particularly enjoy seeking out isolated, exotic shorelines, such as the pink sand beach on Cat Island in the Bahamas. Her husband Jelliffe Jackson is a senior instructor in CU Boulder’s aerospace department. Their relationship brings together their interests in education and technological evolution.

In 2010, Aisha Jackson joined OIT as an academic technology consultant and was responsible for providing consultations, training and support to faculty on instructional technologies. Eventually she became director of technology in OIT. She planned and launched learning management systems such as Desire2Learn and Canvas, developed accessible technology initiatives, and embraced emerging technologies to create a digital learning ecosystem for CU Boulder.

What sets her new position apart from what she was doing before is looking across the university at not just what OIT does well with offerings in academic technology, but across all academic and business units. She’ll be looking at the direction of academic technology more broadly.

She’s looking forward to her new role in combining the ever-changing expansion of academic technologies with best teaching practices and student success.

And she hopes to “line everything up” in a synergy that supports educational outcomes—just like that line of attentive dolls she addressed years ago in Panama.