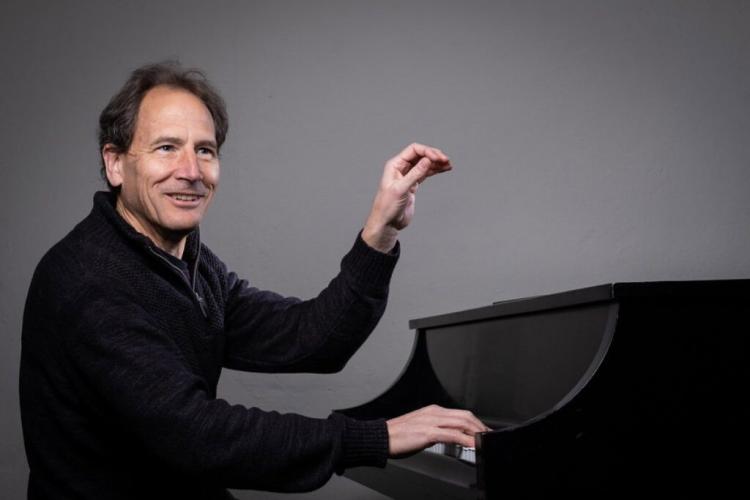 From his Longmont living room Professor David Korevaar will play and discuss:

Girolamo Frescobaldi was celebrated in his own time as one of the most important keyboard players in Italy, known for his virtuosity and invention on both harpsichord and organ. The fourteen “Partite” on the Romanesca first appeared in the 1616 edition of the first book of Toccatas, and are representative of his particular style of quasi-improvised variation. According to Professor Korevaar: "It has been a wonderful adventure to prepare this piece and to explore how it interacts with a modern piano—and how its idiosyncratic combination of fantastic improvisation and rigid structure can be understood four centuries after its composition."

The piece by Clara Schumann is particularly poignant during these tragic days of the pandemic. Clara wrote her Variations on a Theme of Robert Schumann op. 20 in 1853 and presented them to Robert on his birthday with the dedication: “To my beloved husband on the 8th of June 1853 this humble renewed essay by his old Clara.” In late February 1854, Robert experienced an increase in hallucinations, angelic visions sometimes being replaced by demonic ones, and he warned Clara that he feared he might do her harm. On 27 February, he attempted suicide by throwing himself from a bridge into the Rhine River. Rescued by boatmen and taken home, he asked to be taken to an asylum for the insane.

A year earlier, in early 1853, the then-unknown 20-year-old Johannes Brahms had presented himself at the Schumanns' home in Düsseldorf. Brahms played some of his piano solo compositions for Robert and Clara. She wrote in the diary that Brahms "seemed as if sent straight from God". Clara gave the first performance of her Variations on May 27, 1854 to Brahms, who was so moved that he composed his own variations on the same theme. Korevaar writes, “Both pieces are clearly love letters—Clara’s to Robert, Brahms’s to both Robert and Clara. For me this work is a belated discovery: it is a work of great beauty and profundity as well as consummate pianism, with a distinct voice that speaks eloquently of the melancholy, agitation, and resignation of that moment.” When the publication of the two sets of variations was issued, Brahms brought them to Robert at the hospital. Robert’s doctor had forbidden visits from Clara, and Brahms was Robert’s primary connection to the world. It seems agonizingly cruel that Robert’s doctor had forbidden visits from Clara, sadly similar to the experience of Covid-19 patients today. Brahms was Robert’s primary connection to Clara and the world. When it was apparent that Robert was near death, she was finally admitted to see him. He appeared to recognize her, but could only speak a few words. Robert Schumann died two days later, on 29 July 1856.

Distinguished Professor David Korevaar is the Chair of the Roser Piano & Keyboard Program and the Peter & Helen Weil Professor of Piano at the CU Boulder's College of Music.

Since his New York debut at Town Hall in 1985, Korevaar has performed in many roles, as solo recitalist, as soloist with orchestra, as chamber musician and collaborator, as well as (more recently) expanding into the world of theater and dance. He has performed throughout the United States, and he is heard frequently in his home state of Colorado. Internationally, he has performed at London’s Wigmore Hall and around Europe from Riga, Latvia, to Heidelberg, Germany. He is a frequent visitor to Japan, performing and teaching. He has also performed and taught in Central Asia under the auspices of the U.S. State Department’s Cultural Envoy program. In May 2016, Korevaar spent two weeks teaching at the Afghanistan National Institute of Music in Kabul.

During the early part of the COVID-19 pandemic, while in quarantine, Korevaar recorded all of Beethoven’s 32 sonatas at his home in Longmont. It was a monumental effort, which he completed in 41 days. They are posted on his YouTube channel. “It’s wonderful I get to share this. Instead of sitting at home and practicing these pieces, I can put them online and share them with the community.”  “As performers, we miss the direct contact with an audience in a hall,” Korevaar said. “A concert is a religious experience, bringing people together for a reason at the same time. There is no substitute for that.” He believes “performing is an act of generosity” and wants to share the joy of music.