Negotiating Relationships: How Do Nations Maintain Peace and Make War? 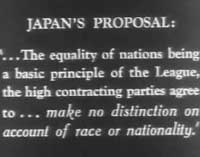 Most students know that Japan attacked Pearl Harbor, precipitating U.S. entry into World War II.  But many know very little of the critical relationship between Japan and the United States that preceded this attack, particularly the relationship that developed from World War I into the early 1930s.  This lesson focuses on the evolution and increasing tension in the U.S.-Japan relationship from the end of World War I to 1933, during which time several pivotal treaties and agreements were negotiated. The period ended with Japan’s crucial decision to leave the League of Nations.

This lesson engages students in an examination of a small collection of diplomatic documents from the United States, Japan, and the international community, issued between 1919 and 1933. Through analysis of these documents, students consider multiple perspectives on the U.S.-Japan relationship during this time. They also consider how these two nations negotiated an increasingly complex relationship and how nations generally communicate with one another in an attempt to manage relationships.  Students use a secondary text to construct a chronology of events from the end of the Russo-Japanese War to 1933. Then students analyze primary sources for intent and tone and consider how the structure of these documents impacted the U.S.-Japan relationship.  Finally, students apply their analyses by writing their own communication from Japan to the United States or the United States to Japan, trying to maintain peace without making war.

Japan’s first conquest was China, which it defeated in the Sino-Japanese War of 1894-1895.  The victory over China shocked the world. When Japan defeated Russia in 1905, the West was forced to acknowledge that Japan had entered the international competition for imperial holdings and must be reckoned with. In an international and regional context, Japan perceived itself as the leader of Asia and regarded other Asian peoples and countries as inferior, backward nations that would benefit from its aid.  This perception was given early voice in the late 1800s by the statesman and philosopher Fukuzawa Yukichi in an important essay entitled “Throwing Off Asia.” (The title was “Datsu-A Ron” in the original Japanese. For an overview of this important essay, see http://en.wikipedia.org/wiki/Datsu-A_Ron and David John Lu, ed. “Good-bye Asia [1885]” in Japan: A Documentary History: The Late Tokugawa Period to the Present. Armonk, New York: M.E. Sharpe. pp. 351–353.) Later, the idea of Japan as the leading nation and people of the Asian region would take shape in the Greater East Asia Co-Prosperity Sphere of Japan’s World War II offensive. (For a brief overview, see: http://en.wikipedia.org/wiki/Greater_East_Asia_Co-Prosperity_Sphere.)

While Japan’s victories in the Sino- and Russo-Japanese Wars had illustrated to Western nations the military and economic strengths of Japan, Western nations were unwilling to accept Japan as a full equal, which was clearly demonstrated in the Versailles Treaty following World War I.

During the first three decades of the 20th century, the governments of Japan and various Western nations entered into treaties and alliances befitting their mutually recognized status as the powerful nations of these decades.  These relationships were often precariously perched on the brink of hostilities as each nation also pursued its own best interests and managed popular sentiments of hostility toward foreigners. These decades are often missed when teaching about 20th-century Japan and the road to World War II, but they are an integral part of a more complete understanding of what happened on December 7, 1941.

The writing assignment detailed on Handout 5 provides the assessment for this lesson. Students write letters from the perspective of the U.S. or Japanese governments on how to maintain peace within the context of events from 1905-1933.

Japan’s Case in the Sino-Japanese Dispute as Presented Before the Special Session of the Assembly of the League of Nations. Geneva, Switzerland: Japanese Delegation to the League of Nations, 1933. Digitized by the Internet Archive from the University of California Los Angeles Preservation Department Collections. .