Home Becoming Modern Moga, Factory Girls, Mothers, and Wives: What Did It Mean to Be a Modern Woman in Japan during the Meiji and Taishō Periods?

Moga, Factory Girls, Mothers, and Wives: What Did It Mean to Be a Modern Woman in Japan during the Meiji and Taishō Periods? 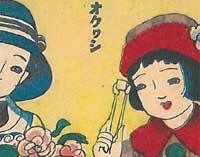 During the Meiji and Taishō periods, from 1868 to 1926, Japan underwent deep change and modernization. As with any rapid societal change, modernization of the Japanese nation and society was a complex process. Modernization included, but was not limited to, rapid industrial growth, new governmental and economic structures, transformation of economic roles and societal structures, and the forging of a national identity. Throughout, the process involved the search for and evolution of new ideas and new models of organization and function. Japan looked to some Western nations, who had embarked on modernization earlier in the 19th century, and adapted promising models, blending those with ideas and structures that would preserve the “Japaneseness” of Japan.

This lesson considers the increasingly complex and differentiated society that emerged in the modern Japan of the late 1800s-early 20th century, roughly the late Meiji (1880s-1911) and Taishō (1911-1926) periods. This lesson considers this emerging society through a case study of women’s roles. Students undertake close reading of visual and written texts by and about women in late 19th- and early 20th-century Japan to begin to formulate a complex definition of what it meant to be a “modern woman” at this time.  In so doing, they consider what Japanese women’s experiences tell us more broadly about modern Japanese society at the time.

The lesson opens with discussion of women in this time period, drawing from students’ prior knowledge and an advance reading assignment. To add to their knowledge, students then examine two images of women from this time period and begin to recognize the varied roles and responsibilities for Japanese women in the modern society of the late 19th and early 20th centuries.  As a next step, students consider excerpts of the Meiji Civil Code of 1888, a state document that formalized the roles and responsibilities of men, women, and families in the new nation under construction during the Meiji Period.

With this foundation, students engage in the main activity of the lesson, in which they work in small groups to undertake a critical reading of a collection of visual and text documents and then use their historical imaginations to consider the variance in the descriptions and experiences of women in Meiji and Taishō Japan. Each student chooses a character and writes a brief biography based on either textual or visual cues offered by the document collection. The lesson culminates in a synthesizing activity in which students mingle with each other to learn about the deep variations in women’s voices: a “mocktail party” of women followed by a discussion of how women’s roles can inform students of the larger complexity of modern Japan.

From Meiji to Taishō.

In 1888, the Japanese government under the Meiji emperor adopted its first written Western-style constitution.  The Constitution was modeled after the Prussian constitution of the time, providing for a government in which authority emanated from a hereditary emperor whose government ruled for the people. In seeking to define the role of the people, the Meiji Constitution outlined the responsibilities of subjects to the emperor and nation, with discussion focused on duties rather than rights. The promulgation of a written constitution was also orchestrated as part of a massive effort to modernize the nation, drawing upon Western ideas of liberalism and social modernization. Such renovations, Japan’s leaders understood, would help to give it international standing in the world of increasingly democratizing modern states.

Meiji reforms included laws that led to social equalization through such means as land distribution and class restructuring and, some would say, elimination. But they also included laws that clearly limited the rights of individuals in protection of government authority, including the Law on Assembly and Political Association of 1889, later known as Article 5 of the Peace Police Law of 1890. These laws, and indeed the range of control indicated by their passing, marked the strength of the Meiji government and the ultimate ongoing legitimacy of the imperial institution.

Those within the government of the imperial state were not the only ones with access to new ideas about democracy and modernization: Japanese intellectuals and activists were also examining liberal social and political ideologies from the West and writing about reform and political participation. By the end of the Meiji period in the early 1900s, democratic ideals were gaining in popularity among the Japanese people. Certain social and economic groups pushed for greater democratic participation in the government, while other groups demanded the government respond to social and economic problems. During the Taishō Period, 1912-1926, advocates for social, economic, and political reforms were loud enough to characterize the period:  historians identify this democratic push as “Taishō democracy” and “imperial democracy.”

The term “Taishō democracy” bears further examination. During the Taishō era, as mentioned, there was a flowering of democratic activity, including male suffrage, populist engagement on specific reform efforts for labor, and women’s rights. Dissatisfaction with government found increasing expression in the form of writing, artistic production, and political activism broadly speaking. The Taishō period was marked by a weak imperial ruler. In this setting, democratic ideas gained traction and voice. Increasingly, people and politicians called for change and rallied for greater democracy. Examples of these efforts include the Tokyo riot in Hibiya Park in 1905, the Rice Riots of 1918, and the push for the Universal Male Suffrage Law in 1925.

Because this burst of activity took place under an imperial system of government, historians have come to refer to the period as marked by “imperial democracy.”  Though that term may seem oxymoronic, in the context of Japan, the democratic flourishing was at least in part a programmatic restructuring of society guided by the imperial government of Japan in its effort to become a “modern state.”  Though all of the consequences of this restructuring were not necessarily anticipated, to imply that democracy arose against the imperial state would not capture the historical complexity of Taishō Japan.

Looking closely at women’s roles in Japan during this time can reveal the complexity of the relationship between the imperial state and its people. As reform and modernization moved through society, women’s roles, particularly, were sometimes co-opted by the government to further the growth and strength of the state, while at the same time the images of the modan gaaru or moga (“modern girl”) were popularized to show Japan’s entry into the modern world. This modern image caused problems, however, as fear of this new female construct and the roles that it entailed caused the rise of a traditional backswing for and towards women.

The late Meiji period was the time of the “Good wife, wise mother,” advocated by the government to strengthen the social fabric of the state along traditional lines. However, given the rapid industrialization and new social structures implemented under the Meiji Restoration, Japan was experiencing a great diversification of social and cultural identities. Socially, the Taishō Period is often remembered as the so-called “jazz age” of Japan.  Both influenced by and similar to the Roaring Age of innovation and excitement of the 1920s in the United States, the period saw a proliferation of social expression through magazines, movies, cafe and urban culture. This was the period of the moga who was, in essence, the Japanese flapper:  a sexually liberated, urban consumer who symbolized a new freedom of the individual and liberation of that individual from the past.

While some in the state insisted that modern and imperial could continue hand in hand, the apparent disagreement was evident in the varying role and portrayals of women. As the Taishō period came to an end, in 1925 the Universal Law of Male Suffrage was passed (notably barring women from voting). Tension regarding the roles of women would continue to exemplify an aspect of Japan’s ongoing complex experience of modernity.

Or if students will not have access to the Internet and cannot access online resources directly, print out copies of the Reading and distribute to students as a pre-reading prior to Day One of the lesson. Also print out Handout 1 and the images in the PowerPoint. Finally, print five copies, one for each group, of Handout 2.

Prior to Beginning the Lesson

Students’ responses in the final discussion can be used to assess learning. In addition, students might be asked to complete an exit ticket on which they write three to four sentences on the question: What do Japanese women’s experiences from this period tell us about modern Japan of the early 20th century?