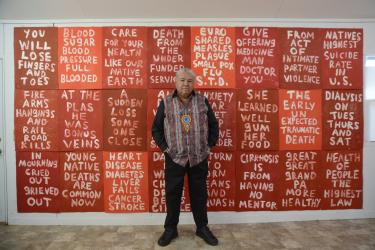 The artist has studied at the University of Kansas, Lawrence (BFA 1976), Royal College of Art, London (1977 graduate studies) and Tyler School of Art , Philadelphia (MFA 1979). Honorary Doctor of Fine Arts and Letters degrees have been awarded by Massachusetts College of Art and Design, Boston (2008), Emily Carr University of Art and Design, Vancouver, Canada (2017), California Institute of the Arts, Valencia, (2018).

In June 2005, Heap of Birds completed the fifty-foot signature, outdoor sculpture titled Wheel. The circular porcelain enamel on steel work was commissioned by The Denver Art Museum and is inspired by the traditional Medicine Wheel of the Big Horn Mountains of Wyoming.

Heap of Birds’ artwork was chosen by the Smithsonian’s National Museum of the American Indian as their entry towards the competition for the United States Pavilion at the 52nd Venice Biennale. He represented the Smithsonian with a major collateral public art project and blown glass works in Venice, June 2007 titled: “Most Serene Republics”. This broad project was created as a memorial in Italy to over 20 Sioux warriors and children who died as part of Bill Cody’s wild west Euro shows.

His artistic creations and efforts as an advocate for indigenous communities worldwide are focused first upon social justice and then the personal freedom to live within the tribal circle as an expressive individual. Recently Heap of Birds was elected to the American Academy of Arts and Sciences 2020.