Heartbroken, I weep by the shore of this life,
Who, pray, will take me across?
Boatman, I don’t know your name. [1]

The beats of the Bhatiali ebb and flow like the tides of rivers. Sung by men on boats slowly floating downstream, fluidity characterizes this folk music tradition of Bengal. The rivers become a metaphor for life and boats become bodies at various stages of fray. Majhi, the boatman, is a philosopher poet who gleans knowledge about the rhythms of life with the beats of the river. Bengal delta, called the land of rivers, is a filigree of freshwater systems as intricate as the cultures that have developed on it. The crisscrossing of the rivers is also how kingdoms and now nationstate boundaries were drawn.

Do lines drawn on marshlands stay?

The delta, with plenty of irrigation and alluvial soil, gave rise to a peoples fed on a diet of fish and rice. The landscape is littered with date palms whose sweet sap is used to make sweetmeats that have travelled the world over as delicacies and memories of home for Bengalis. My great grandmother would pack the long-lasting ones and travel to her mother’s home which she left upon getting married. We no longer remember where it is except that it is on the other side of the India-Bangladesh border. Not the border that was drawn during the first partition of Bengal but the second one, after which it became pretty certain that going back and forth was not a possibility. Her Hindu relatives had left their homes, under much more violent conditions than she had and crossed a border instead of merely taking a boat to the home she now had with her husband and children. My father migrated with the names of his  forefathers for the last seven generations committed to memory because they’re used in rituals to honor the ancestors. However, the legacy of mothers seems to have dissolved with their ashes in the Ganga.

Do rivers remember those that were never mothers or fathers?

My grandmother didn't know the date of her birth. Whenever asked, she would say that her mother told her that she was born six months after the big earthquake. On a whim one day, I googled the most severe earthquakes in India and found the one that she spoke about. Incidentally, within a few weeks of me learning about the earthquake, it was all over the news. The earthquake of 1934 was the last earthquake that was as devastating as the Nepal earthquake of 2015. I remember our house in the Indian Himalayas trembling and all of us running out that morning in April 2015. Our house was of the newer kind made of concrete and it shook for what seemed like minutes. Nepal is still recovering from the impact of the disaster.

Do earthquakes get citizenship?

My mother's mother was born on the banks of the Ganga in Benares and moved to the banks of the Yamuna when she married my grandfather. But the music was still from the floodplains of the Bengal delta. She hummed the tunes even when dementia took most of her memory and speech away in the months before she passed. My parents wake up at 7am everyday to watch GoodMorning Bangla, which is a TV show where artists from all over the world perform Bengali music. My parents live in the Himalayan state of Uttarakhand. Two of my grandparents passed away in that house and their ashes were immersed in the Saryu. They were born closer to the mouth of the Ganga on the Bengal delta, but died closer to its source in the Himalayas.

Do rivers go to heaven or come from there?

Bengali is my first language but it was taken over by English with my education to become the language I think in. My uppercaste upbringing made sure I never questioned the privilege that came with my proficiency in the colonizer’s tongue. However, I often lamented the alienation from the language and geography of the Bengal delta which is my affective idiom. The nostalgia was fueled further by uppercaste Bengali authors writing in English and speaking to the diaspora that my family now identify as. I felt yoked to the mangroves of the Sundarbans, the Irrawady river dolphins and the Bengal tiger through the pages of The Hungry Tide. Even though my uppercaste grandparents would have never had to lead a life inside a forest with maneaters, these were stories much like the ones they told me. The landscapes are now alive in my imagination as a home I have never visited.

I moved to Boulder, Colorado in August 2019 when unknown to me, precursors of what 2020 was going to be were already surfacing. I have not been able to go back. Each time I walk on trails surrounded by pine, I am immediately transported to the Himalayas of Uttarakhand. My dog was picked up by a leopard there while I was writing end-of-semester essays. I made a paper boat with his name and sent it floating in the Boulder creek. However, it was almost a year of living here that the red soil of Colorado looked like the ranga maati of the plains of Bengal. I am doing a PhD in Geography and Feminist Political Ecology as subfield. Naturecultures and critiquing the binaries that have colonized my worldview through the aftermath of the Enlightenment, are central to my studies in grad school. In my seminars when I have to introduce myself and talk about something interesting about me, I drop the factoid that my name, Prakriti, is the Sanskrit word for nature. I am often told that the work I do now, was fated. This feels contradictory to my experience of wading through a series of interrogations and eliminations involving lots of thinking and doing. It doesn’t seem to be over yet.

Is nature a legacy or destiny?

May be the answers lie at the end of rivers. May be the boatman can take us there. 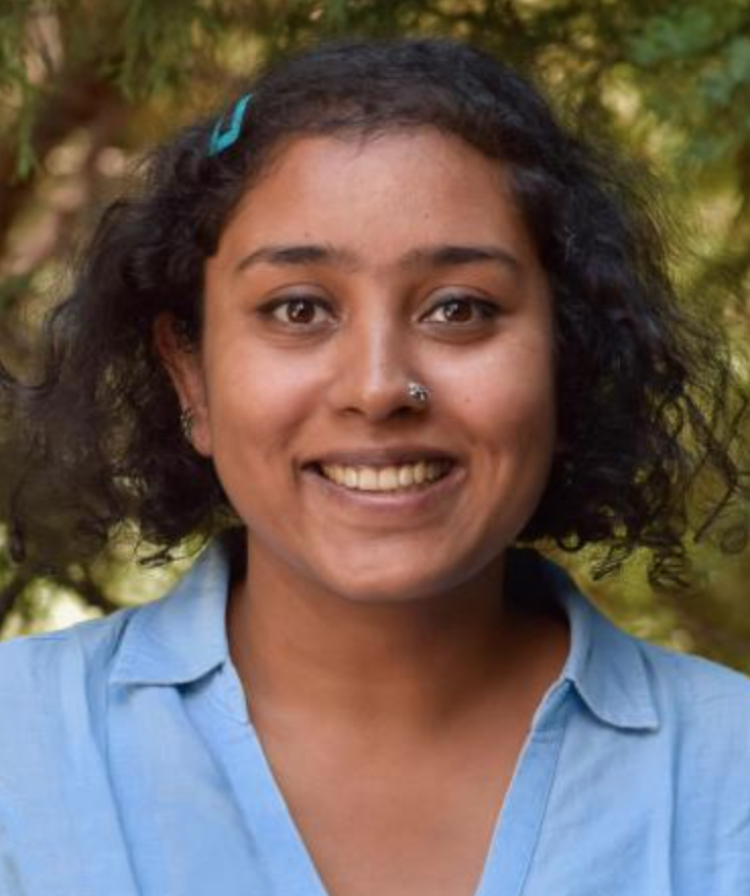 Prakriti Mukerjee is from India and worked in participatory action research projects on traditional agriculture and marine conservation. The mountains and its people inspired her to pursue a PhD on knowledge politics in community based conservation in Central Himalayas. She is a second year PhD student in Geography, CU-Boulder.