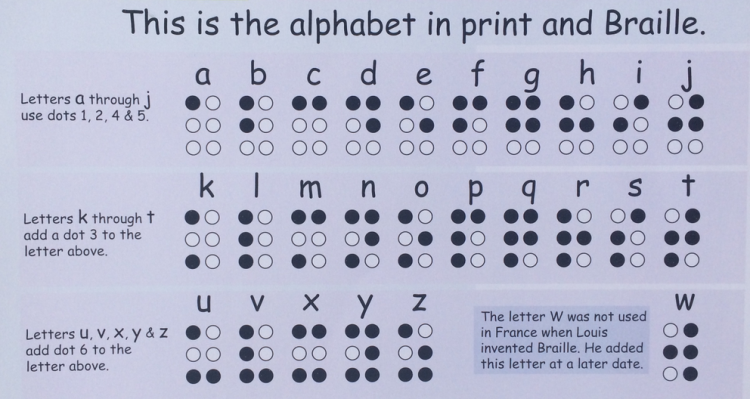 Braille is a tactile writing system used by people who are blind and visually impaired. It is traditionally written with embossed paper. You can write braille with the original slate and stylus, or type it on a braille writer, such as a portable braille notetaker or computer that prints with a braille embosser.

Braille is named after its creator, Louis Braille, a frenchman who lost his sight as a result of a childhood accident. In 1824, at the age of 15, he developed a code for the French alphabet as an improvement on night writing (a system of code that was used in response to Napolean's demand for a code that soldiers could use to communicate silently and without light at night).

Braille consists of rectangular blocks called 'cells' that have tiny bumps called 'raised dots'. The number and arrangement of these dots distinguish one character from another. Since the various braille alphabets originated as transcription codes for printed writing, the mappings (set of character designations) vary from language to language, and even within one. In English braille the current system is called Unified English Braille (UEB) and is taught in different levels:

Explore these resources for more information, advanced braille codes, and the history of braille.

Translation software allows you to type and edit documents in Word and then translate into braille for printing on an embosser or with a PIAF machine using swell paper.

Braille Basics - Everything You Need to Know

Using a Slate and Stylus