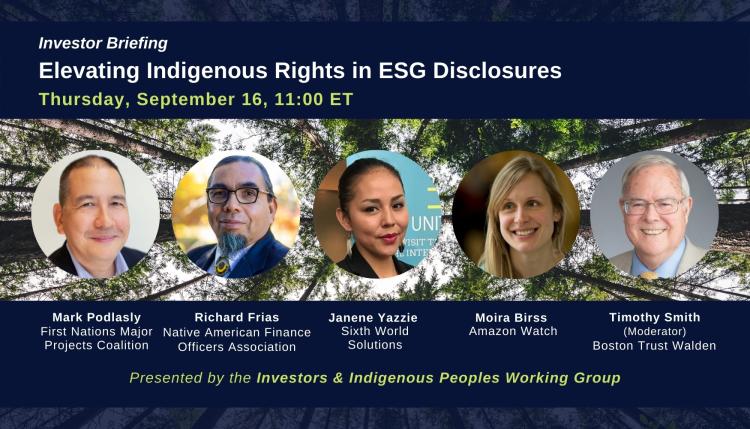 ​Growing concern about material risk from climate change is leading to reevaluation and reconceptualization of environmental, social and governance (ESG) standards across industries. Recently, the U.S. Securities and Exchange Commission (SEC) invited public comment on a potential rule for climate risk disclosure. One critical consideration in ESG risk assessment that is too often overlooked is violation of Indigenous Peoples’ human rights and land rights where businesses operate either domestically or internationally.

In this investor briefing, experts examined key recommendations in a letter to the SEC submitted by 22 environmental and Indigenous rights organizations, which addressed the multiple considerations when assessing impacts on Indigenous Peoples within ESG and climate disclosures. The panel also parsed critical issues raised in the letter, such as: Indigenous and tribal peoples’ land rights and its centrality to environmental and climate protection, overlap of Indigenous rights with all three pieces of the ESG landscape, and business risk when disregarding protections Indigenous Peoples enjoy under international law (legal, political, reputational, and operational).

Mark Podlasly, Director of Economic Policy, First Nations Major Projects Coalition
Mark Podlasly (Nlaka’pamux Nation, Cook’s Ferry Band) is the Director of Economic Policy at the First Nations Major Projects Coalition. He has over 25 years of experience in the development of capital projects connected to energy, natural resources and community infrastructure around the world.

In addition, Mark informs Indigenous governments on the establishment of sovereign wealth funds/trusts to capture and invest revenue from resource extraction industries. He currently manages a $40 million investment fund shared by eight BC First Nations.

Mark holds a master’s degree from Harvard University and is a regular speaker at global business and governance events including the International Finance Corporation’s annual sustainability conference in Washington, DC. Via.

Richard Frias, Executive Director, Native American Finance Officers Association
Richard “Rico” Frias (Chiricahua Apache from the Chihene Nde Nation) is Executive Director of the Native American Finance Officers Association (NAFOA). He is the former Legislative Director for the National Indian Gaming Association. He is an attorney, licensed to practice in the State of New Mexico, The Pueblo of Pojoaque Tribal Court, and the Stockbridge-Munsee Tribal Court. Most recently, he served as the Chief General Counsel for the Pueblo of Pojoaque in Santa Fe, New Mexico. Mr. Frias had worked for the Pueblo previously, starting in 2014 as Special Counsel and then Chief Counsel to the Governor. In 2017, he started his own practice focused on commercial transactions and Indian law. Mr. Frias has a B.A. in Creative Writing from the University of California, Irvine. He earned his JD from the University of New Mexico School of Law with a Certificate in Indian Law in 2011.

Mr. Frias has previously served on the Board of Directors for the New Mexico Wildlife Federation and as an Advisory Board Member for the Tribal Gaming Protection Network. He believes children are the only treasure on earth. His children Django, Ysabel, Maceo, and Emil push him to make the future brighter for Indian Country. He enjoys hiking and camping with his family and walking his two Dogo Argentinos, Luca and Karma. (Adapted via.)

Janene Yazzie, Co-Founder, Sixth World Solutions
Janene is a Dine entrepreneur, community organizer and human rights advocate from the Navajo Nation. She works on climate change, water security, food security, energy development, and nation building with indigenous communities. Co- founder of Sixth World Solutions LLP., and co-founder of the Navajo Nation Little Colorado River Watershed Chapters Association (LCRWCA), she has built expertise in infrastructure  policy, integrated land and water management, and restoration and protection of traditional ecological knowledge (TEK). Janene Yazzie is a community organizer and human rights advocate that has worked on development and energy issues with Indigenous communities across the United States for over 12 years. Via.

Moira Birss, Climate and Finance Director, Amazon Watch
Moira (she/ella/ela) brings over fifteen years of human rights and social justice advocacy, campaigning, and field experience to her work at Amazon Watch to hold the financial industry accountable for its contributions to Indigenous rights abuses, Amazon deforestation, and climate change. She has worked on researching community-based models of alternative economies, advocating for affordable housing, and promoting environmental protection, and spent several years as a human rights observer in Colombia. Moira has a BA in Latin American Studies from the University of Michigan and an MA in International Relations from Tufts University. Via.

Tim joined Boston Trust Walden in 2000 after serving for 30 years at the Interfaith Center on Corporate Responsibility (ICCR), including 24 years as Executive Director. ICCR is a coalition of more than 300 faith-based investors and partners (including Boston Trust Walden). ICCR has been a primary player in the corporate responsibility movement and social investment community since the early 1970s.

In 2007, 2012, and 2013, Tim was named as one of the “Top 100 Most Influential People in Business Ethics” by Ethisphere Institute. In 2010, he received the Bavaria Award for Impact at the third annual Joan Bavaria Awards for Building Sustainability into the Capital Markets. In 2011 and 2012, he was named one of the most influential people in corporate governance by the National Association of Corporate Directors.

Tim has served on multiple boards and chaired advisory councils for several different institutions. He currently serves as chair for Shared Interest, which mobilizes economic resources for communities in Southern Africa and as co-chair of the Investment Committee of the Thirty Percent Coalition (the Coalition for U.S. board diversity®), which aims for equal representation for women and people of color on corporate boards of directors.

Tim earned a BA from the University of Toronto and Masters of Divinity degree from Union Theological Seminary. Via.