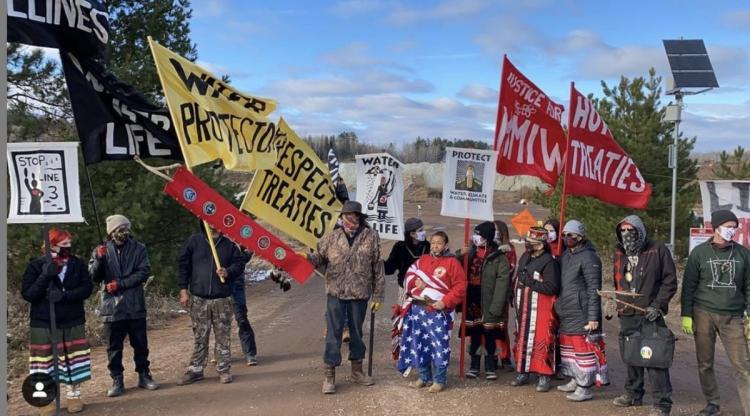 The Enbridge Line 3 pipeline expansion spans treaty territory of the Anishinaabe people in the Great Lakes area of the United States and Canada. The pipeline is intended to carry tar sands oil from Canada to Wisconsin and, in doing so, poses a risk to the land, ways of life, and culture of the Anishinaabe.

To date, construction of Line 3 has violated numerous human rights of Indigenous Peoples in the United States, including the right to free, prior, and informed consent; the right to health; the right to culture; and the right to security and to be free from violence. These rights are protected by international laws such as the International Convention to Eliminate Racial Discrimination (ICERD), which the U.S. ratified in 1994, and the United Nations Declaration on the Rights of Indigenous Peoples (UNDRIP), which the U.S. declared support for in 2010.

Due to lack of response from the U.S. about these violations, Honor the Earth and Giniw Collective, on behalf of the Anishinaabe Indigenous Peoples, submitted a Request for Early Warning Measures and Urgent Action Procedures to the United Nations Committee on the Elimination of Racial Discrimination (CERD) in March 2021. For context, CERD is the treaty body responsible for monitoring the implementation of ICERD, and this type of Request intends to prevent the escalation of conflict and serious harm, with resulting measures intended to be preventative and to respond to conflicts immediately. The request was forwarded by First Peoples Worldwide and the American Indian Law Clinic at the University of Colorado.

On August 31, 2021, CERD published a letter to the U.S. Government dated August 25, 2021, requesting that the U.S. and the State of Minnesota respond to the allegations of rights violations, noting that if validated, they would amount to violations of ICERD. The letter requests that by October 15 information be provided on how the U.S. Government:

Notably, CERD requested information from the U.S. regarding the status of its treaties with the Anishinaabe and its efforts to guarantee the protections ensured by the treaties. These treaties protect the Anishinaabe’s rights to hunt, fish, gather medicines, and harvest manoomin – wild rice sacred to the Anishinaabe. The response is the first mention by CERD of the necessity of the U.S. Government to honor treaty rights with Indigenous Peoples, and asks specifically about usufructuary rights as upheld by the Supreme Court of the United States ruling in Minnesota v. Mille Lacs Band of Chippewa Indians.

Similar to their inquiry at the end of 2020 about violation to the rights of the Gwich’in attendant to proposed oil and gas development in the Arctic Refuge, CERD once again articulated the threat of extractive industry to Indigenous women, citing the influx of temporary labor and man camps.

Since the initial Request was submitted in March, local law enforcement has made over 600 arrests and citations to water protectors protesting pipeline expansion (with some reporting as many as 800), there have been increased reports of human rights violations and violence against Indigenous women around Line 3 construction, and a preliminary report from Enbridge shows at least 28 spills during construction, affecting 12 river crossings with leaks of up to 9,000 gallons.

On August 27, 2021, a second update was sent to CERD regarding the seriousness of these developments as the pipeline nears completion. Several ongoing lawsuits have been unsuccessful at halting construction and, to date, the Biden Administration has not taken any action.

The environmental degradation of Line 3’s current construction and the future risks of spills stand to irreparably damage these places that hold sacred value to the Anishinaabe. Line 3 alone is projected to produce more carbon emissions than the entire economy of the State of Minnesota. The Anishinaabe are already feeling the effects of development and climate change, which has already negatively impacted the Anishinaabe’s ability to harvest manoomin. Additionally, because maintaining traditional ways of life necessitates a close and symbiotic relationship with the Earth, Indigenous People are the first to be harmed when climate change threatens the balance of this fragile relationship.

In its response, CERD clearly articulates the multiple rights violations attendant to the pipeline that, if left unaddressed, will perpetuate systemic racial discrimination against the Anishinaabe. ICERD and the UNDRIP hold countries to a higher standard, requiring that Indigenous Peoples as rights holders be integrated into decision-making processes over their lands, territories, and resources. Countries like the United States, which fail to uphold this right, in turn fail to ultimately respect the sovereignty and right to self-determination of Indigenous Peoples.

Image by Giniw Collective via.