UN Investigates Allegations that the U.S. Violates the Human Rights of the Gwich’in with Proposed Oil and Gas Development

UPDATE: Multiple Responses from the UN Committee on the Elimination of Racial Discrimination Reinforce Concerns of Rights Violations 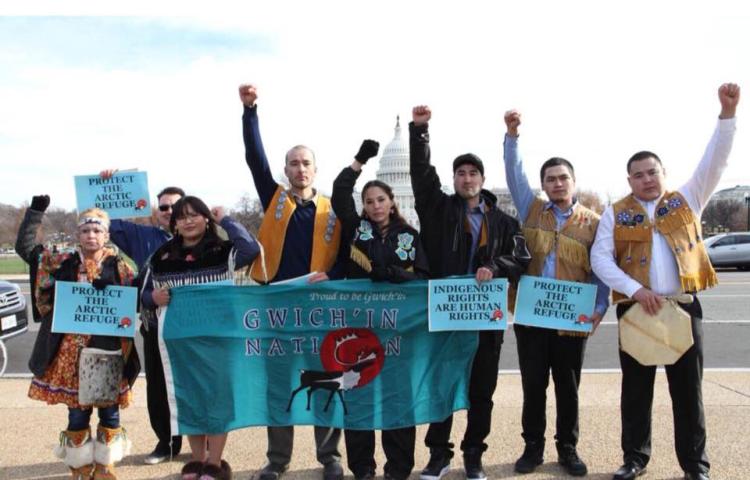 12/14/21 - This article has been substantially revised to include all responses to date to the Gwich’in Steering Committee’s request for UN action following proposed and unconsented development of sacred lands by the U.S. Read the Gwich’in Steering Committee Statement on Third Response from the United Nations to Imminent Rights Violations from U.S. Oil and Gas Development in the Arctic Refuge.

Since 2019, the Gwich’in Steering Committee (GSC) has engaged the United Nations Committee on the Elimination of Racial Discrimination (CERD) to raise concerns of human and subsistence rights violations attendant to U.S. oil and gas development of the Coastal Plain of the Arctic Refuge. This land – called Iizhik Gwats'an Gwandaii Goodlit (The Sacred Place Where Life Begins) – is sacred to the Gwich’in as the birthing ground for the Porcupine Caribou Herd, which is integral to Gwich’in culture, subsistence and ways of life.

Responses from CERD have been a major development in the recognition of the rights of the Gwich’in and potential for violations and harm. CERD is the treaty body responsible for monitoring the implementation of the International Convention on the Elimination of All Forms of Racial Discrimination (“the Convention”), which the U.S. has signed and ratified. When U.S. policy inadequately considers the rights of Indigenous Peoples, international mechanisms such as CERD are crucial to preventing devastating impacts.

Below is a timeline and context for ongoing engagements. Currently lease and development activity has been temporarily halted in order for the new U.S. administration to review the legality of the initial environmental assessment of the lease program under the previous administration. There has also been legislative movement to restore protections for the Arctic Refuge, which were terminated without the consent of the Gwich’in in the 2017 Tax Cuts and Jobs Act.

On November 13, 2019, following accelerated movement by the U.S. to lease the Coastal Plain for oil and gas development, GSC, Cultural Survival, Land is Life, First Peoples Worldwide, and the American Indian Law Clinic at the University of Colorado submitted a Request For Early Warning Measures and Urgent Action Procedures.

Following the submission, CERD took the extraordinary measure to call for a response from the U.S. In its letter to the U.S., sent August 7, 2020, CERD expressed grave concern that planned development by the U.S. was “conducted without the free, prior and informed consent of and adequate consultation with Gwich’in indigenous peoples, despite the serious harm such extractive activities could allegedly cause.”

It also asked the U.S. to provide information about how it would take measures to:

1) guarantee the Gwich’in’s right to free, prior, and informed consent;
2) protect sacred sites;
3) prevent violence against Indigenous women;
4) mitigate the climate impact of drilling in the Coastal Plain; and
5) "ensure effective remedies against instances of racial discrimination, including in the context of extractive industries.”

CERD further noted that proposed development would infringe on the Gwich’in peoples’ human rights “by significantly reducing their traditional source of food, the caribou, encroaching on the sacred site of the coastal plain, increasing health risks due to environmental degradation, including air pollution, and by increasing the risk of violence against Indigenous women due to the arrival of extractive industry workers.”

On September 4, 2020, GSC sent a follow-up letter to CERD, updating on the severity of the situation after the U.S. formalized its plan to develop the Arctic Refuge.

CERD sent a rare second inquiry to the U.S. on November 24, 2020, noting that oil and gas development in the Arctic Refuge would have "the greatest and most destructive impact on the Coastal Plain and the caribou herd,” in violation of the rights of the Gwich’in and the U.S.’s existing treaty commitments.

Additional remedies requested were full review of treaty obligations, concrete measures to protect the Coastal Plain, incorporating the UN Declaration on the Rights of Indigenous Peoples (UNDRIP) into law, and protection of Indigenous communities from COVID-19.

After the U.S. Bureau of Land Management set a January 6 date for the lease sales, GSC sent a third request on December 10, 2020, urging CERD to "immediately intervene to avoid further conflict and prevent severe violations of the Convention by the United States," as the rush to lease sell curtailed the standard time allotted for public comment.

On January 11, 2021, following the sale of the Arctic Refuge for oil and gas development, GSC and allied groups submitted another letter to CERD, which detailed continuing human rights violations perpetuated by the U.S. This letter asked CERD to provide an update to its early warning and urgent action procedures, noting it would be nearly impossible for the Gwich’in to invalidate the sale and prevent permanent destruction of their sacred land once the sale was finalized.

“The U.S. continues to proceed without adequate assessment of the impacts of the exploration and development on Indigenous rights and the environment and without adequately consulting with or obtaining the free, prior and informed consent of the Gwich’in and other impacted Indigenous Peoples,” the letter stated.

CERD Responds to Letter from the U.S. under a New Administration

On December 3, 2021, CERD responded to an unpublicized letter from the U.S. dated August 10, 2021, in which the U.S. updated CERD that lease activity in the Arctic Refuge had been suspended to undertake a new environmental review assessment.

In its response, CERD underscored the U.S. obligation under the Convention to guarantee that “the rights of the Gwich’in and other indigenous peoples in Alaska will be respected, including the right to consultation and to free, prior, and informed consent regarding the project of oil and gas development in the Coastal Plain.”

The U.S. is currently under a regular review by CERD, and submitted a series of reports this past summer. CERD said it would discuss issues raised by the Gwich’in during this review, which was significant because the U.S.’s own reporting did not specifically mention these issues.

Unfortunately, the U.S. reports reiteratd of the U.S.’s weak commitment to free, prior and informed consent, stating “the United States understands ‘free, prior, informed consent’ to call for a process of meaningful consultation with tribal leaders, but not necessarily the agreement of those leaders, before the actions addressed in those consultations are taken.”

CERD’s response to the U.S. moves forward and elevates the GSC’s specific concerns, and in doing so, CERD fills the gaps where the U.S. omitted Gwich’in considerations in their own reporting. The response also calls attention to a failure in the U.S.’s 2010 endorsement of UNDRIP, whereby the U.S. consistently does not uphold the requirement of free, prior and informed consent, instead utilizing the less stringent framework of consultation.

GSC and allied groups continue to seek permanent protections of the sacred Coastal Plain through legislative and legal means, as well as through corporate engagement with banks, insurance companies and energy companies. Until the U.S. fully enshrines UNDRIP into law, international mechanisms such as CERD will be necessary to hold the U.S. accountable where its laws and policy fail to acknowledge, respect and protect Indigenous Peoples from extractive harms.

➡ About the Gwich’in Steering Committee

➡ About the UN Committee on the Elimination of Racial Descrimination

“We urged the international community to hold the United States responsible for ongoing discrimination towards us as Indigenous Peoples. That call has been answered by the Committee on the Elimination of Racial Discrimination,” said Bernadette Demientieff, Executive Director of the Gwich’in Steering Committee. “Almost all international human rights conventions recognize the Gwich’in people’s fundamental rights to our culture, health, nutrition, and subsistence. Securing permanent protection for ‘Iizhik Gwats’an Gwandaii Goodlit’ (The Sacred Place Where Life Begins) is about our human rights, our way of life, and our very survival.”

Image via the Gwich'in Steering Committee.