UPDATE 7/10/20 - After publication of this article, Native leaders delivered a letter to the National Football League requesting immediate change of the name and eradication of all Native names, mascots and logos. Read the letter in full. 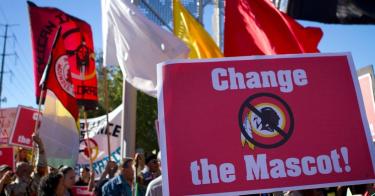 Following the June 26 letters from investors calling for NFL sponsors to terminate business with the Washington D.C. franchise if it did not stop using the racial slur “R*dsk*ns” as its name, the Washington team announced it was reviewing its name on Friday, July 3. Just prior to the announcement, FedEx released a statement in support of the name change and NIKE removed all R*dsk*n apparel from its online store, with PepsiCo, Bank of America and NIKE following suit after the announcement.

This seismic shift represents decades of advocacy from Native leaders on the ground, with shareholders, at annual meetings of sponsors and in the courts. In an Indian Country Today article detailing some of this history, First Peoples Worldwide founder Rebecca Adamson called this moment an example of the power of Indigenous leadership "to tap into the markets to make change behind the scenes," paying homage to longtime leaders of the movement Susan White and Suzan Shown Harjo.

With change reportedly imminent, Carla Fredericks, Director of First Peoples Worldwide and a signatory of the investors' response, told Indian Country Today there is still work left to do. The mascot and logo need to be terminated as well as the name, the team should outline a strategy to regulate fan behavior if there is opposition, and Native leadership must be consulted on next steps. "It can't be the way it's been before," she said. "We're going to keep pushing on that."

In response to the Washington team's announcement of the review, the investors who made the initial call-to-action commended the team for this first step and offered support during the review process. The full statement follows:

Statement from Investor Group Regarding The Washington D.C. Football Team Decision to Review the Team Name

We commend the Washington D.C. Football Team for announcing today its review of the team name. We also commend FedEx, Nike, Bank of America, and Pepsi for communicating publicly and to the team the importance of changing its name. This is long overdue and follows years of work by countless individuals.

We also believe there must be a clear timeline for the review. Delay is not acceptable and the team must move forward with urgency.

Finally, it is important to emphasize that while the team statement focuses on the team name, it must also include all hurtful words, imagery and stereotypes, including the logo and mascot. As the National Congress of Americans made clear in 2018 “the name and mascot of the Washington National Football League team is offensive and hurtful to American Indian and Alaska Native people”.

We look forward to continued engagement with FedEx, Nike, Pepsi, Bank of America, and other sponsors on this topic. They continue to have an important role to play in holding the team accountable during this review process and for ensuring that their sponsorships and other business relationships live up to their commitments to racial justice.

About: The Oneida Trust, First Peoples Worldwide, Trillium Asset Management, Boston Trust Walden, Boston Common Asset Management, First Affirmative Financial Network, and Mercy Investments engaged with FedEx, Nike, Bank of America, and Pepsi regarding their respective business relationships with the Washington D.C. NFL Football team for decades. Most recently, those engagements culminated in letters to FedEx, Nike, and Pepsi from over 80 investors representing over $620 billion in assets asking the companies to cease their relationships with the team if it continues to use its current name and logo.

Native Leaders Respond to Washington's Team's 'Thorough Review' of Name – Letter to NFL Demands Immediate Name Change and Eradication of all Native Names, Logos and Mascots in the League 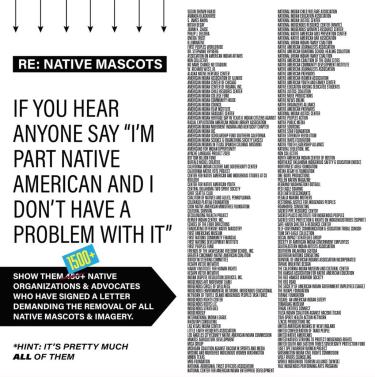 In response to the Washington team's announced review of their racist name, several Native leaders sent a letter to National Football League commissioner Roger Goodell on Monday, July 6, asking for the immediate discontinuation of the name and eradication of all Native names, logos and mascots throughout the League.

By Friday, July 10, the letter had amassed support from nearly 1500 signatories. The signatories included over 100 Native-led organizations and a wide range of constituents, including tribal leaders, actors, artists, poets, journalists, lawyers, judges, elected leaders, business leaders, investors, philanthropists, state representatives, religious leaders, executive directors from over 70 organizations, professors and students from over 50 universities, and private citizens. The signatories represented both Native and non-Native support and are inclusive of members of over 150 federally-recognized Tribes.

Full text from the letter below, and version with signatories here.

The undersigned are Native American leaders and organizations that have worked tirelessly and substantively for over half a century to change the racist name of the Washington team. We appreciate the statements made in recent days regarding the league and the team’s intention to revisit the name, but we are deeply concerned that the process or decision to rename is being made in absence of any discussion with the concerned leadership.

Specifically, we, the undersigned, request that the NFL immediately:

Finally, we note that the above items are non-negotiable and not subject to consultation or dialogue “processes”, however, we expect the NFL to engage in a robust, meaningful reconciliation process with Native American movement leaders, tribes, and organizations to repair the decades of emotional violence and other serious harms this racist team name has caused to Native Peoples.

On Monday, July 13, the Washington team announced it was retiring its name and logo, owing to decades of Native-led advocacy on the ground, in courtrooms and through corporate and shareholder engagement. Discussing the historic occasion, many advocates point to the need for continued engagement given that the team has yet to unveil its new name and logo and that “2,200 high schools use Native imagery in their school names and mascots” in the U.S. today.

Speaking with CU Boulder Today about the confluence of social and shareholder advocacy that led to this moment, Carla Fredericks, Director of First Peoples Worldwide, said, “I think the social pressure on companies to do the right thing on racial justice is very high. Companies recognize that if they are not responsive to social pressure, it is very bad for their business.”

Regarding next steps for the Washington football franchise, she added, “There needs to be a true process of reconciliation, apology, and examination of harm. Because there really has been a harm perpetuated upon us by this name. Walking away from the team name and its imagery is not enough.” 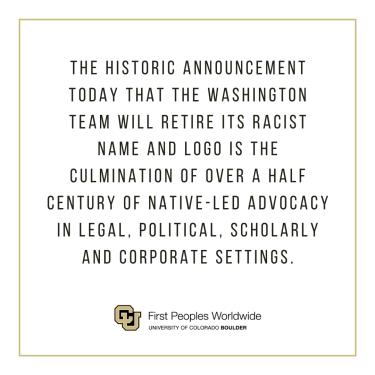 The historic announcement today that the Washington team will retire its racist name and logo is the culmination of over a half century of Native-led advocacy in legal, political, scholarly and corporate settings.

“This is a momentous occasion, and we must build upon its momentum so that all companies align their stated commitments to racial justice with business activities that affect Native peoples,” said Carla Fredericks, Director of First Peoples Worldwide.

First Peoples Worldwide will continue to advocate for a respectful and appropriate team name and logo for the Washington team, and work to eradicate the hundreds of dehumanizing team names, logos and mascots that still exist in professional and scholastic sports in the U.S.

It has been an honor for First Peoples Worldwide to work with the social investment community on this issue for many years, and we are grateful for the decisive action by FedEx, Nike, PepsiCo, Bank of America, Walmart, Target, DICK'S Sporting Goods, Amazon.com and all companies who have taken a strong stand for Native peoples on this issue.