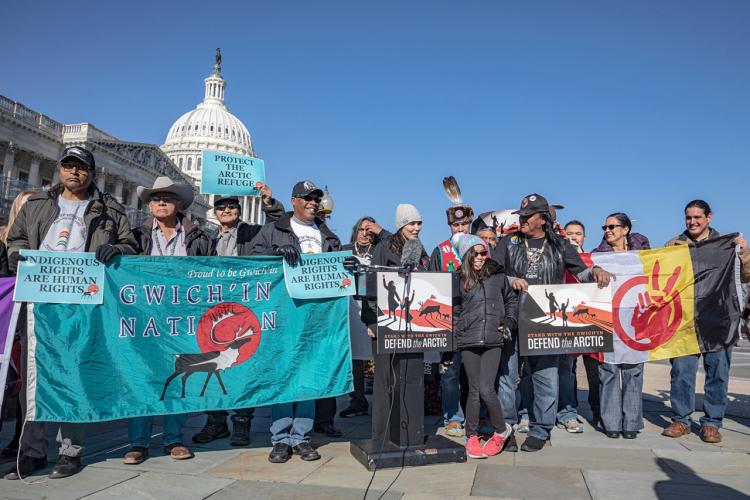 To commemorate the 50th Anniversary of Earth Day, we highlight how advocacy by and for the Gwich’in Nation and the Standing Rock Sioux Tribe has led to some dramatic changes in bank policies and government legislation that better protects people and the planet.

In 1988, Elders and Chiefs of the Gwich’in Nation gathered together for the first time in over 150 years and formed the Gwich’in Steering Committee to act as the unified voice to protect the Gwich’in way of life. The call to action was in response to U.S. proposals to drill for oil in the Coastal Plain of the Arctic National Wildlife Refuge, which the Gwich’in call Iizhik Gwats’an Gwandaii Goodlit (the “Sacred Place Where Life Begins”).

Exploration and development in this expanse of land spanning 1.5 million acres would be detrimental to the migration and calving of the Porcupine Caribou Herd, which the Gwich’in have depended on since time immemorial as their primary source of their food, cultural identity and spirituality. The demise of the herd essentially means the end of the Gwich’in Nation and their way of life.

Some thirty years later, the Gwich’in tirelessly continue to advocate for their livelihoods as the situation has become more urgent. Rising temperatures from climate change are altering the landscape and threatening the wildlife ecosystem, from fish to fowl to plant life. To make matters worse, in recent years the U.S. has accelerated plans to exploit the Coastal Plains for fossil fuels despite much prior policy and legislation that protected the region.

The passage of the Tax Cut and Jobs Act in 2017 mandated the U.S. government “administer a competitive oil and gas program for the leasing, development, production, and transportation of oil and gas in and from the Coastal Plain.” The bill was drafted and passed without the free, prior and informed consent of the Gwich’in.

The Gwich’in’s multi-tiered, multi-partner approach is a model for Indigenous advocacy that is reshaping business policies and practices to better protect people and the planet.

Change Comes with Growing Partnerships and Advocating on Multiple Fronts

In 2019, First Peoples Worldwide and the American Indian Law Clinic at the University of Colorado partnered with the GSC to develop and implement an international advocacy strategy essential to corporate engagement. We joined the Arctic Refuge Defense Coalition and through newly-created and existing partnerships with Indigenous-led organizations, human rights advocates and corporate partners, we committed to one overarching mission: to ensure the voices of the Gwich’in were elevated and acknowledged.

Led by executive director Bernadette Demientieff, the GSC and its Youth Council have delivered testimony before the United States Congress, in corporate boardrooms, at the United Nations, and at public venues in Alaska and across the country. This led to passage of the Arctic Cultural and Coastal Plain Protection Act by the U.S. House of Representatives in September 2019, and has brought human rights violations to Gwich’in as a key consideration in the Universal Periodic Review of the U.S., set for November 2020.

The GSC and its partners have also made concerted and continuous efforts through corporate and shareholder engagement to advocate for bank and business policy to avoid projects that could harm the Gwich’in or endanger the land and wildlife that allows them to exist. It is here where the GSC has facilitated a remarkable shift in the financial industry.

In the past four months, four of the top U.S. banks have joined a growing number of financial institutions with explicit policies excluding financing for oil and gas development in the Arctic, including Goldman Sachs, JPMorgan Chase, Wells Fargo, and most recently Citigroup.

In a statement following Citigroup's policy change, Demientieff said, “For years, we have been speaking out about the need to keep drill rigs out of our sacred lands in the Arctic Refuge, and it’s amazing that a growing number of major banks are listening,” adding, “the fight to protect this place is far from over, and we will continue to hold accountable any bank, oil company, or politician that seeks to benefit from its destruction.”

In the midst of this, a growing movement of investors and financiers have begun to acknowledge the crucial role they play in addressing climate change. BlackRock, one of the largest asset managers in the world, made headline news when CEO Larry Fink focused his January 2020 annual open letter to the leadership team on how climate change is creating “a fundamental reshaping of finance.”

In celebrating these victories, particularly on the 50th anniversary of the official worldwide celebration of Earth Day, we acknowledge the powerful and critical role that Indigenous leaders play in bringing these issues to the forefront and to move traditionally implacable industries to make change for the better of humanity.

We also recognize a major pivot in public and private awareness that came from the mass social uprising that occurred at Standing Rock in 2016.

Connecting the Dots from Standing Rock to the Arctic Refuge

During the Dakota Access Pipeline controversy, First Peoples supported the corporate advocacy for the Standing Rock Sioux Tribe, coordinating weekly meetings with the banks financing the pipeline. Banks and investors didn’t understand or weren’t fully aware of the Tribe’s concerns because meaningful engagement was not allowed to take place, despite repeated attempts by the Tribe to communicate their opposition as soon as the project was announced (see recording of Tribal Council meeting with DAPL Representatives that took place in September 2014). By the time banks began to listen, it was too late.

As a direct result of this top-level engagement, and from mass amplification of social unrest around pipeline construction, divestment from the project was massive and costly – more than $12 billion spent or lost on the project that was estimated to cost $3.8 billion, as evidenced by First Peoples’ case study Social Cost and Material Lost: The Dakota Access Pipeline.

Since DAPL went into operation in 2017, First Peoples has taken part in countless consultations with corporations and shareholder groups who ask how best to avoid “another Standing Rock”.

The first steps cannot be understated: where Indigenous Peoples and Native communities may be involved or directly affected by projects, it begins with proper and equitable consultation. After checking the boxes of free, prior and informed consent (see our FPIC Due Diligence Questionnaire), it means giving Tribes the right to say “yes” or “no” to project terms or the project as a whole.

Four years later, with ample lessons from DAPL, advocacy by and for the Gwich’in to protect the Arctic Refuge from drilling is proving more productive. Before potentially dangerous projects begin, many financial institutions seem more aware of and receptive to the truth: Indigenous Peoples are on the front lines of climate change, both as defenders of their sacred places and as the communities most impacted by the negative consequences.

But recent victories are no reason to relax efforts. In fact, the momentum and proven tactics should be used to expand and accelerate advocacy, as evidenced by the critically weak Equator Principles revisions to be ratified this year.

From supporting the Standing Rock Sioux Tribe’s engagement with banks to building the human rights strategy for the Gwich’in Steering Committee, we stand with Indigenous communities across the country that are fighting for their sovereignty, their way of life, and the protection of Mother Earth.

Photo by Keri Oberly via.