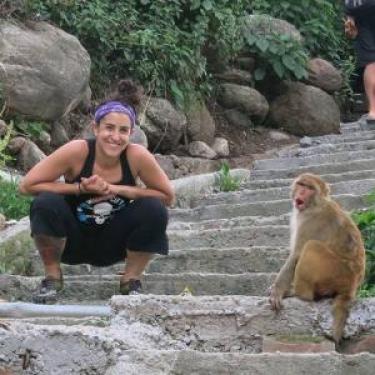 As a doctoral student at the University of Colorado Boulder, Tammy Rae Matthews unites her passions — sport, media, language and gender — in her primary research, which includes historical and contemporary representations of transgender athletes in sport media. Her additional interests are in education, global and domestic culture, new media, interpersonal relationships, travel, art, technology and business. Specializing in Journalism Studies, she will earn her Ph.D. in Media Research and Practice.

Matthews, a native Chicagoan, worked in major-market print media for nearly 15 years. She was the special sections editor for the Chicago Sun-Timesas well as for its north suburban editions of the Pioneer Press. She continued as a freelance editor and reporter for several years after relocating to Colorado. During her professional (and thus insider) experience, Matthews witnessed various linguistic and language performance practices in areas related to the political economy of media as well as issues related to power in socially oriented discourse and language practices. In the academy, Matthews applies sociolinguistics, semiotics and linguistic anthropology to discourse analysis. Her dissertation focus is at the intersection of gender, media and sport in Namibia, Africa.

Matthews earned her Master’s of Science degree in Public Communication and Technology from Colorado State University’s Department of Journalism and Media Communication. There, she was presented the 2015-2016 Graduate Teaching Instructor of the Year award. Prior to graduate school, Matthews earned a certificate in Teaching English as a Foreign Language (TEFL) and taught English to Tibetan refugees near Dharamsala, India. As an undergraduate, Matthews received her Bachelor’s of Journalism, with a magazine-editing emphasis, from the University of Missouri-Columbia’s School of Journalism. During Fall 2017, Matthews spent the term as a Global Studies Instructional Coordinator for Semester at Sea, a study-abroad organization.