One hundred and twenty-eight years after Phi Beta Kappa was founded in 1776 at the College of William and Mary, the University of Colorado was granted a charter by the United Chapters of Phi Beta Kappa—then as now—headquartered in Washington, D.C.

The Year was 1904 and it was a great honor for this young, small university which was less than three decades old to be granted a charter. Before a charter is granted, a college or university must undergo a thorough examination of its liberal arts program by a panel appointed by the Phi Beta Kappa Society. Only those schools judged to be outstanding, academically and administratively, are awarded charters.

Alpha of Colorado elected its first students to membership in 1904. Four women and two men were elected and initiated in April 1905. Today we elect initiates in the Fall and Spring semesters and 200-250 women and men are initiated into membership annually.

There are approximately 255 Phi Beta Kappa chapters nationally, and about 15,000 of the brightest and best-educated undergraduates in Arts and Sciences in the U.S. are initiated each year. The criteria for election to Phi Beta Kappa include an evaluation of the rigor and breadth of the academic experience of the top less-than 10% of graduating classes in the liberal arts at colleges and universities. Candidates are also screened for moral character.

In 1906 Alpha Chapter elected nine students to membership. One of the initiates, Katerina Maria Bruderlin, has made Alpha Chapter financially secure. Katerina, whose parents were Swiss immigrants, changed her name to Katherine following her graduation from CU where she majored in mathematics, German and the natural sciences. She was an outstanding teacher in Denver high schools for many years, and was a renowned horticulturist. She was a founder of the Denver Botanical Gardens and the author of many articles and books in the field of botany. She was also a civic leader and activist.

In 1932, she married Dr. William H. Crisp, an ophthalmologist and a faculty member at the CU Medical Center (now known as the University of Colorado Health Sciences Center). Dr. Crisp died in 1951. Before her death in 1979, Katherine Crisp established a substantial trust for Alpha Chapter. Investments made since 1980 increased the value of the portfolio five-fold, until recent stock market reversals here created a dent.

Interest from investments enables Alpha Chapter to award fellowships each academic year to graduating seniors, or recent graduates of the College of Arts and Sciences at UCB who will continue to study in liberal arts disciples as graduate students. The Crisp Fellowship Committee determines the winners and the numbers of awards to be made.

Congratulations to you, the newest members of Alpha Chapter and congratulations also to family and friends who have joined us on this joyful occasion. I hope your memories of UCB and Alpha Chapter of Phi Beta Kappa are as fond as those of Katerina Bruderlin Crisp. 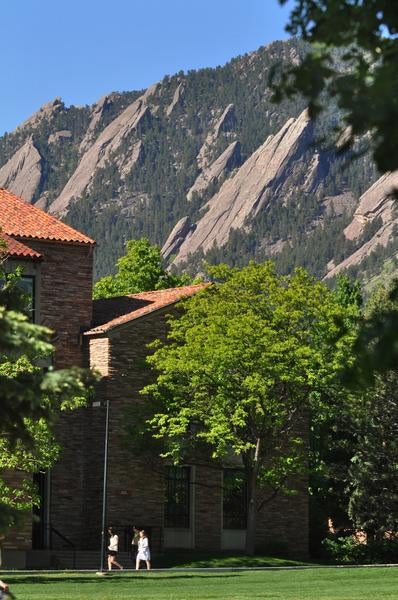