In the Vaida Lab, we are interested in the fundamental study of atmospheric molecules, processes, and chemistry on both modern and prebiotic Earth, as well as other planetary bodies.

Our research interests are at the interfaces of chemical physics, atmospheric science and environmental research. My research group uses fundamental techniques and concepts of physical chemistry to investigate the spectroscopy and reactivity of atmospheric molecules and radicals. Recently, in a collaborative effort, I investigated the possibility of sun-light initiated reactions by pumping of vibrational overtone transitions in the ground electronic states of atmospheric chromophores. This work explained some of the discrepancies between atmospheric measurements and models regarding OH production at dusk and dawn and the production of the stratospheric aerosol layer.

The study of the effect of the environment on spectroscopy and photoreactivity in the atmosphere is under investigation in my research. Specifically, I am interested in the spectra and photoreaction dynamics of water complexes and reactivity of organic films at the water-air interface. Water complexes may play a role in atmospheric radiative transfer and therefore in climate, assertions requiring research into the fundamental properties of such complexes at atmospheric conditions of relatively high pressure and temperature. Molecular complexes provide an important reaction environment in planetary atmospheres, where water plays a unique role in spectra and in enabling chemical reactions.

Water-air interfaces are present in the atmosphere at the ocean surface and at the surface of atmospheric aerosols, which are important in climate, atmospheric chemistry and human health. In an interdisciplinary effort, I proposed that organic films form at the such interfaces and impart on the system unique morphological, optical and chemical properties, under study in my laboratory. Our collaborative team has extended these ideas  to propose atmospheric aerosols to be effective prebiotic chemical reactors. I am pursuing the experimental validation of these ideas with research aimed at biomolecular synthesis at the water-air interface. 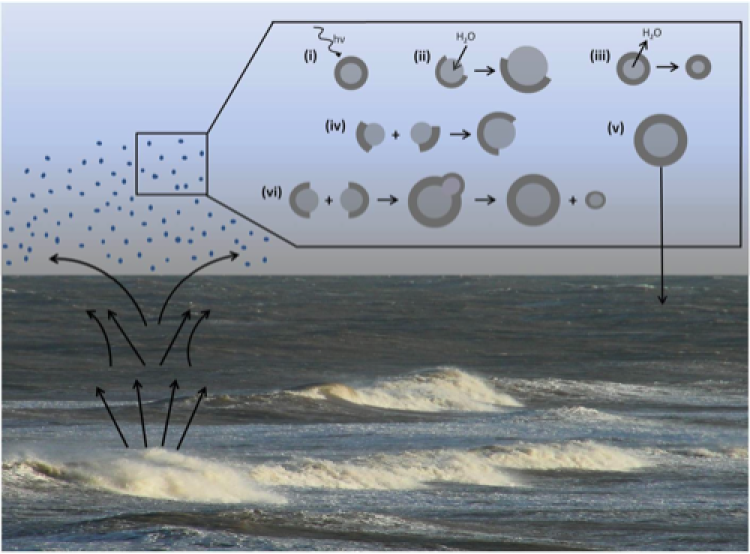 (v) Deposition back to the ocean
(vi) Coagulation and division

Throughout this processing, the aerosol particle experiences fluctuating temperatures, photon flux, relative humidity, etc.  In the Vaida lab, we use two-dimensional Langmuir films as models for these complex environmental surfaces.

In today's atmosphere, the effect of atmospheric aerosols on climate is complex, and currently remains with a very large uncertainty.  In order to better determine their effect on climate, it is essential to understand the surface composition and morphology of these particles.  As seen below, depending on the morphology of the film, the permeability of the surface of aerosol particle changes.  The Vaida lab investigates these complex surfaces to contribute to a better understanding of the effect of atmospheric aerosol particles on climate.

One of the major problems facing origin of life scientists is the emergence of complex biomolecules in the absence of biological machinery (like enzymes).  Dobson, Elison, Tuck, and Vaida (PNAS, 2000) proposed that the surface of atmospheric aerosols can provide the favorable environment needed for the condensation reactions necessary in the production of these biomolecules (like peptide bond and phosphodiester bond formation shown below).

These reactions face both thermodynamic and kinetic constraints in the bulk aqueous ocean, and thus are unlikely to have occured there on early Earth.  There air-water interface provides a favorable environment for these condensation reactions through its provision of a water-restriced environment and favorable orientation and alignment of organic monomers.  This is explored experimentally in the Vaida group through the use of the Langmuir trough in conjunction with Infrared Reflection-Absorption Spectroscopy (IRRAS).

The hydration of aldehydes, ketones, and acids in the gas phase has important consequences on the atmospheric chemistry of organic compounds.  The Vaida lab explores the formation of hydrates, their products, and their sun-light initiated reactions and dynamics via vibrational overtones.  These processes have important atmospheric implications in OH radical production as well as aerosol formation (SOA) and growth.

Recent NASA missions require information on sulfur compounds in planetary atmospheres.  Among the planetary bodies on which sulfur are of interest are:

Cavity enhanced techniques are used in the Vaida lab to study the water mediated reactions of sulfur compounds relevant to these planetary bodies.  The figure below illustrates the transition state lowering of a sample chemical reaction due to water complex formation.