Wound healing serves an important function in biology, as it enables the tissue maintenance that maintains compartmentalization of cell types that drives various processes, including the barrier function of skin and other epithelial tissues. There is significant data to support the theory that the wound healing capability of cells is frequently highjack during cancer progression, where tumors migrate through an invasive migration process from one tissue to another, termed metastasis.  Other recent data has shown that viral infection leads to a collective migration in human skin cells, which suggests that activation of wound healing is a normal physiological response to viral infection. Although wound healing is conclusively responsible for a wide array of physiological and pathophysiological response in human biology, several key questions remain to be answered: 1. How do cells dtect a wound? 2. How do cells detect that wound has been healed?

Live Cell Imaging of the Activity of "Sheddase" TACE

Abstract: Ligand shedding has gained increased attention as a major posttranslational modification mechanism used by cells to respond to diverse environmental conditions. The protease TACE [tumor necrosis factor α (TNFα)-converting enzyme, encoded by ADAM17] is a critical mediator of such ligand shedding, regulating the maturation and release of an impressive range of extracellular substrates that induce diverse cellular responses. Exactly how this protease is itself activated is unclear, in part because of the lack of available tools to measure TACE activity with temporal and spatial resolution in live cells. We have developed a FRET (fluorescence resonance energy transfer)-based biosensor called TSen that measures TACE activation kinetics in live cells with a high degree of specificity. In combination with chemical biology approaches, we used TSen to probe the dependence of various means of TACE activation on the induction of the kinases p38 and ERK. Using TSen, we also identified a previously unknown connection between actin cytoskeletal disruption and TACE activation. Cytoskeletal disruption led to rapid and robust TACE activation in some cell types and the accumulation of TACE at the plasma membrane, enabling increased cleavage of endogenous substrates. Our study highlights both the versatility of TSen as a tool to unravel the mechanisms of TACE activation in live cells and the importance of actin cytoskeletal integrity as a modulator of TACE activity.

In the following publication, we demonstrate the capabilities of our motility analysis software, named Pathfinder, which is intended to aid researchers in complex quantification of cellular motility without the need for complex programming skills.

The development of a novel high throughput computational tool for studying individual and collective cellular migration. 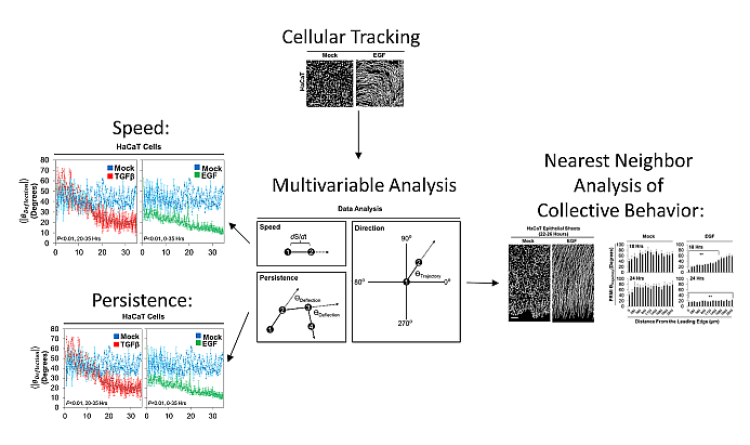 The following publication highlights three main principles. First, TGFβ induces wound directed collective migration in human keratinocytes. Second, this ligand dependent behavior is driven by local activation of MAPK towards the leading edge of groups of cells. Third, this spatially constrained MAPK activity is functionally different than global activation of MAPK, which leads to stochastic collective migration (not solely directed towards the wound). 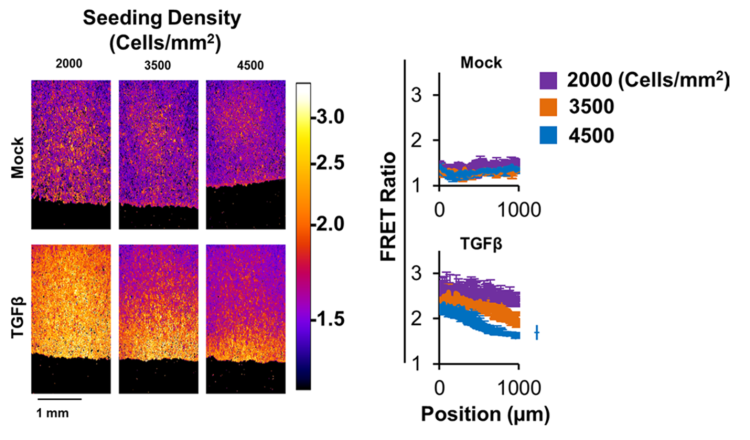 2. Systems biology of TGF-β signaling in normal and cancer cells

We aim to understand the role of transforming growth factor-β (TGF-β) signaling in normal and cancer cells. TGF-β is a multi-functional cytokine responsible for regulating growth and differentiation of a wide variety of cell types and tissues. It is a potent inhibitor of normal epithelial cell proliferation and possesses tumor suppressing activity. The majority of human tumors are of epithelial origin and their proliferation is no longer inhibited by TGF-β. This usually arises either from a loss of key signaling molecules in the TGF-β signal transduction pathway (e.g., TGF-β receptors), or from activation of oncogenes. TGF-β can positively regulate expression of many tumor suppressor genes which cause the cell to stop proliferation and yet negatively regulate expression of many proto-oncogenes/oncogenes which promote cell cycle progression. The action of TGF-β in normal epithelial cells is to downshift the engine that drives cell proliferation by shifting the balance of the activity of the oncogene and tumor suppressor gene. 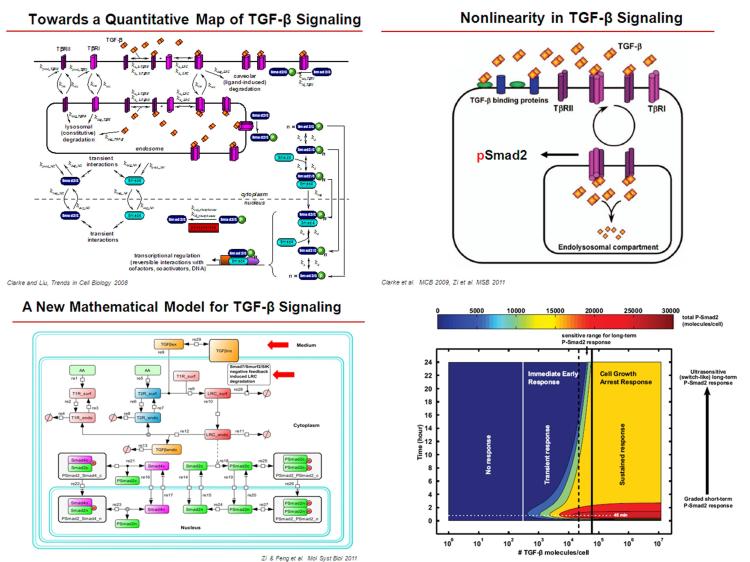 TGF-β signals via two receptor Ser/Thr protein kinases, termed type I and type II TGF-β receptors. The type II receptor phosphorylates and activates the type I receptor, which then phosphorylates Smad2 or Smad3 within their C-terminal Ser-Ser-X-Ser motifs. Once activated, Smad2 or Smad3 associate with the shared signaling molecule Smad4, translocate to the nucleus and in concert with additional transcription factors alters the transcription of a large repertoire of genes. Although several key downstream targets that transduce the TGF-β signals from the cell surface to the nucleus have been identified, it remains to be determined how TGF-β can mediate myriad cellular responses and regulate so many important physiological processes. To address how TGF-β signaling could mediate such diverse effects, we use the two following approaches: 1) Find as yet unidentified molecules that may mediate diverse functions, and 2) understand how the TGF-β network behaves as a system, which may identify how known network components interact to produce unexpected emergent behavior. The principal methods used to achieve these aims include cDNA library screening for genes that mediate TGF-β resistance (Erickson et al., MBC 2009), purification and identification by mass spectrometry of protein complexes associated with well-established signaling transducers (Knuesel et al., 2003, Zhu et al., 2007) and computational modeling of TGF- β/Smad signaling dynamics (Clarke et al., 2006; Clarke et al. 2008; Clarke et al. 2009; Zi et al. 2011).