Home Research The Hidden Role of Parasites in Food Webs

The Hidden Role of Parasites in Food Webs

Despite the ubiquity of parasites and pathogens in all ecosystems, our understanding of their significance in mediating predator-prey interactions, primary production, energy flow and nutrient cycling is severely limited. To better comprehend the ‘hidden’ influence of parasites in community and ecosystem ecology, we use two empirical host-parasite systems from freshwater habitats: trematode parasites in pond communities and fungal pathogens of lake zooplankton. Our goal is to answer a deceptively simple question: what would a world without parasites look like? 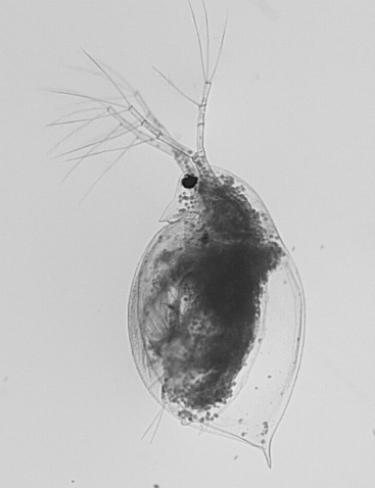 Because of the keystone importance of Daphnia in lake food webs, both as a primary consumer and as a food resource for fish, any pathogen that regulates Daphnia populations could have cascading effects throughout the food web. By combining experiments and histology, we found that infection by a chytrid fungus (Polycaryum laeve) caused reproductive castration, increased mortality, decreased growth, increased respiration, and a near cessation in migratory behavior within large-bodied Daphnia hosts. Owing to increased conspicuousness of infected individuals, the parasite also caused a fourfold increase in the susceptibility of Daphnia to predation by planktivorous fish. Likely stemming from this result, lake characteristics, especially water color and planktivore density, strongly influenced the spatial pattern and severity of epidemics. Current and published analyses of long-term data suggest that epidemics can regulate Daphnia populations, altering both water clarity and food availability for fish.

In pond ecosystems, trematode parasites are one of the most commonly observed infections. Because of their high infection prevalence and high secondary productivity, trematodes can comprise as much biomass as the most abundant aquatic insect taxa, such as dragonflies, damselflies, and mayflies. These parasites have complex life cycles involving multiple host species, many of which create strong trophic linkages between aquatic and terrestrial taxa. Infection of hosts that metamorphose, for instance, such as larval amphibians and aquatic insects that begin development in water but transition to more terrestrial adult forms, functionally connect infection dynamics across ecotones. Such connections can become amplified when parasites alter host behavior or morphology to increase predation risk on intermediate hosts (i.e., trophic transmission). Moreover, growing evidence indicates that parasites – both through their effects on hosts and their own chemical composition – can alter ecosystem processes such as nutrient cycling at the ecosystem scale. For instance, Mischler et al. (2016) showed how the trematode Cotylurus flabelliformis altered the cycling of nitrogen within pond environments; because of trematode’s low N content but high demand for host carbon, high-intensity infections accelerated the rate at which snails excreted N, with subsequent consequences for aquatic primary producers. We continue to explore how common yet cryptic parasite infections influence the way communities and ecosystems function with aquatic environments.