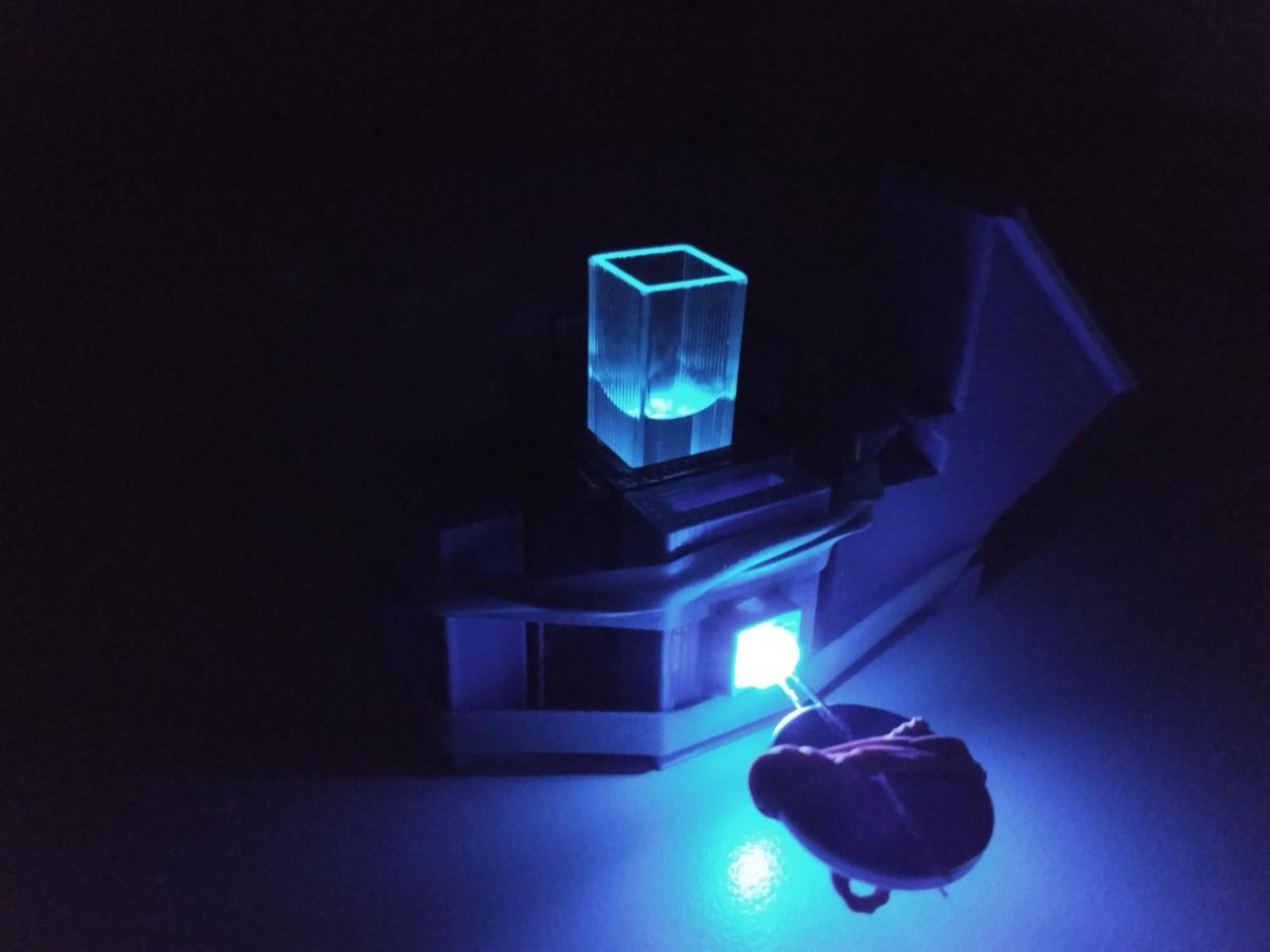 Demystify scientific instruments by having your students build them.

When we taught a class of first year chem/biochem majors about spectroscopy, we introduced them to it with a task. It was to dig through bins full of the things shown below (many of them 3D-printed and all of them common or inexpensive) and to build a working spectrometer. We wanted them to make a device that would take input light from overhead fluorescent light bulbs and spectrally disperse it for analysis of its component colors. With little additional guidance they took to the task and through playing with and investigating these pieces were able to construct rudimentary devices that fit the bill. As the course evolved, they used the same parts to design ways of measuring the colors absorbed (and how strongly) by dye molecules in solution such as chlorophyll in olive oil or food dyes in water. These parts can also be used to create a device capable of measuring the spectrum of emitted light from photoexcited molecules such as quinine sulfate in tonic water or emitted light from a glow stick. 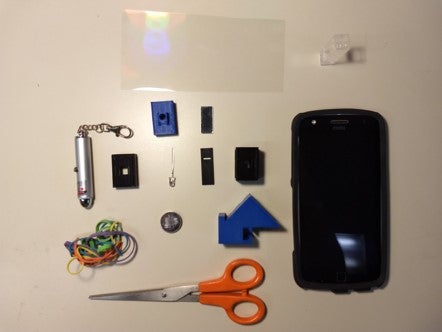 At this time when many courses are being taught remotely, we thought it might be useful to share the tools for implementing these methods. This guide will explain the parts (and how to obtain them) to build and use:

There are eight 3D-printable parts available for the modular spectrometer. All .stl 3D print files can be downloaded for free on the Thingiverse web site. These parts were designed using SketchUp. If you would like the SketchUp files or have any other questions about things we are doing here, please contact us (niels.damrauer@colorado.edu, yisrael.lattke@colorado.edu, madhu.singh@colorado.edu). If you come up with neat experiments that are different, please let us know.

These parts are intended to fit together. Assemblies (spectrometers) can be secured as systems of parts using rubber bands secured from notches in the spectrometer body. Some examples will be shown below.

In addition to these 3D-printed parts, you will require several items. Links for vendors are provided in the last section of the guide.

6. A power source to light the LED: a 3V coin cell battery.

7. Rubber bands to hold the assembly together and scissors for cutting the grating to size.

8. Toy laser pointer (useful for exploring the light path in the spectrometer, but optional).

Specifics about the spectrometer body 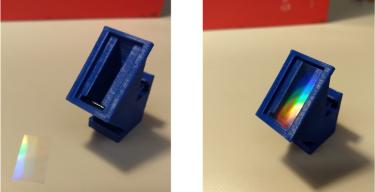 The cell phone interfaces to the spectrometer body with the camera pointed directly at the grating in the spectrometer face. This is seen below with rubber bands used to hold things together. In this picture, the 3D printed parts on the left (black) are a slit assembly and a slit (see below for further discussion regarding the spectroscope)

Specifics about the grating

The groove density of the holographic lines in the material is used to control dispersion, or the rate at which colors separate as a function of distance from the material. As noted earlier, we used 1000 lines/mm. We also noted that the lines should run across the grating left to right for a vertically oriented rectangle (see below; left). A nice way to determine the groove direction is to use a laser pointer. In the picture on the right, the bright red spot is on the paper (not the transmission grating sheet) and shows the laser light traveling directly through the grating material and hitting the paper (the so-called zeroth order line). The two first-order diffracted lines are the fainter spots a couple of centimeters above and below. This means the material is dispersing light in this vertical direction and it means the grooves must be running horizontally (as desired). The grating can then be cut to fit the spectrometer body with this groove orientation.

As noted earlier, we let students discover this with parts provided and their phone cameras. The basic components (other than the camera) are those shown below in the picture on the left consisting of the spectrometer body (A) assembled with grating and mirror, the slit assembly (C) , and a slit (F) or (G).

The assembly interfaced with the camera is shown below on the left. The camera's view is shown in the middle picture. The colors are the spectral components of the compact fluorescent light (CFL) bulb that is lighting the room. The horizontal lines are images of the slit in the slit assembly which is regulating the light entering into the spectrometer body. As discussed later, the CFL colors are very useful for calibrating these spectrometers using free software called Image J. The right picture shows the visible spectrum of the sun lighting the blinds of the room.

The spectrometer must be calibrated every time it is moved in a significant way. Because of this, we suggest that all data is taken in a single session and time between samples is minimized. The calibration process is a simple one that relies on a light source with well-defined lines. CFL bulbs are readily accessible, so they are a good choice. First, a picture is taken through the spectrometer of the line spectrum generated by the bulb. This is shown below with the known colors from the atomic emission in the CFL annotating the spectrum. 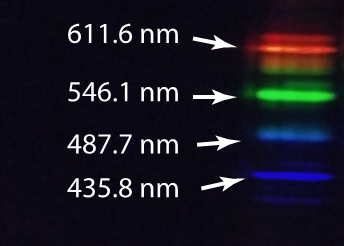 The 2D picture from the camera is then processed in ImageJ (see later section for instructions) to generate a 1D spectrum which is given as brightness of the image (grey value) vs. camera pixel number. This 1D spectrum (intensity versus pixel number) should have four distinct peaks corresponding to the spectral lines annotating the image above. One can then make a calibration file by finding the equation for a line that fits these data (y=wavelength, x=pixel number). We usually use Excel for this by making an xy plot of four points followed by a linear regression. Once the slope m and intercept b are known, any wavelength can be determined by multiplying m times pixel number and adding b.

The spectroscope assembly discussed above can be quickly modified to include a sample holder as shown below (the slit in the slit assembly is not shown). Optional blank plates for blocking ambient light are also shown on three sides around the sample holder. Remember, however, that wavelength calibration will require acquisition of a CFL line spectrum before or after collecting data for the glow sticks. Importantly, both measurements need to be made before the spectrometer assembly is moved relative to the phone camera. If you do use the three blank plates, consider scattering CFL light into the spectrometer via the sample port using a piece of white paper after removing the glow stick. 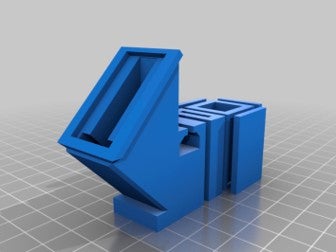 Below are data collected for three common glow sticks (Blue, Green, and Yellow) by placing the sticks in the spectrometer's sample holder one at a time. The solid line spectra are collected with the 3D printed spectrometers. The dotted line spectra were collected using an expensive fluorometer in our laboratory. We do pretty well with our cell phone instruments although improvements could be made, perhaps by experimenting with smaller slits. 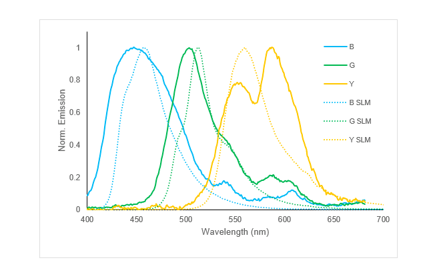 Modifying the glowstick emission spectrometer to include an LED holder at 90 degrees to the spectrometer analysis path leads to the fabrication of a simple fluorometer. See the configuration shown below in the image on the left. The inclusion of an LED holder (and an LED!) provides a light source to photoexcite molecules in the sample holder. The picture on the right shows a similar configuration although the setup had some different parts included for various reasons. It's modular so you can try different things.

Below are fluorescence data (darker blue line) collected using our cell phone fluorometer with tonic water in the sample holder. The spectrum reflects the behavior of the molecule quinine sulfate which provides the bitter taste in tonic water. For this measurement we used a UV LED (400 nm) to excite the quinine. Also shown (lighter blue line) are data collected using our expensive laboratory fluorometer. Again we do pretty well! 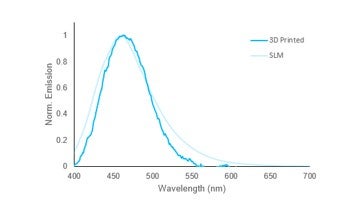 By changing the position of the LED relative to the spectrometer body, we can create an absorption spectrometer. Although it is hard to see in the image below on the left, the part in the back is an LED holder with diffuser housing. So in this configuration, the path of the LED light is directly through the sample and into the spectrometer housing. This allows the camera to analyze light that has passed through the sample in order to figure out what colors have been absorbed and how strongly. For this reason its good to use a white light LED rather than the UV LED used in the last experiment. The white light LED has a broad spectrum so one can explore a larger region of wavelengths absorbed by visibly colored samples. The diffuser housing is nice because the cell phone camera often saturates with the LED shining directly at it. We often put a piece of white paper or tissue paper in the way (sliding it in the slot) to lower the intensity. The right picture shows this in a similar setup (including a second slit assembly) used for an experiment.

The quantity Absorbance, is defined as A=-log(I0/I) where I0 refers to the intensity of light entering a sample (at any given wavelength) and where I is the intensity (at the same wavelength) exiting the sample. For practical purposes, an intensity spectrum is measured for a blank sample such as water in the same cuvette followed by an intensity spectrum collected for an absorbing sample, such as a dye in water in the same cuvette. Data would be processed with the same formula A=-log(I0/I) with the I0 data being the blank and the I data being the sample you are interested in. The data shown below do this using our 3D printed spectrometers for the dye Allura red (this is the dye used in red food coloring). The image on the left is the cell phone picture captured using the white-light LED and passing through a sample of water only. The spectrum in the middle is the picture captured when the light passes through the cuvette that now contains some dye as well as water. One can easily see that blue and green colors are being absorbed for a dye that appears red to the eye. The picture on the right shows Absorption data from our 3D-printed spectrometer for five different concentrations (these concentration-dependent data can be used to explore Beer's Law in addition to showing what colors of light the dye absorbs).  We have also used these spectrometers to show that the green hue in decent olive oil (EVOO) is due to chlorophyll.

ImageJ is free software developed and distributed by the NIH (National Institutes of Health). it can be found at the following link:  Download ImageJ

Generating spectra from photographs is straightforward, but care must be taken, especially where comparisons between spectra are desired. To generate a spectrum like that shown in the tonic water example, the following approach is taken: 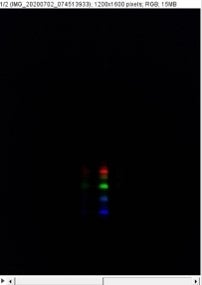