Trump’s campaign has immigrants running for the polls. 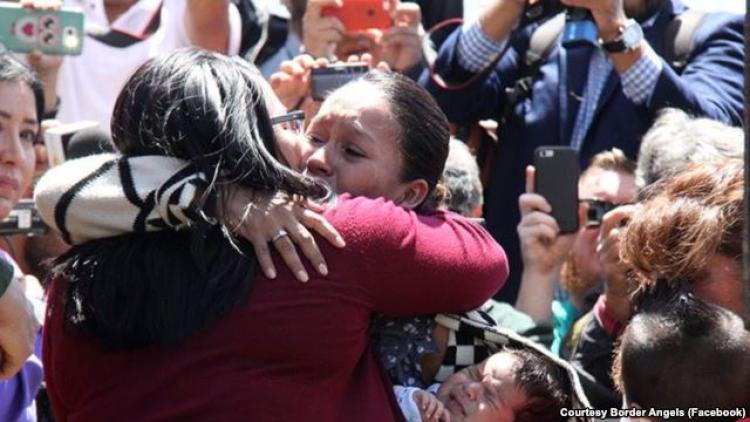 Gabriela Esparza was able to hug her mother and sister on April 30 during a symbolic event when an emergency door at the U.S.-Mexico border in California was opened for a brief time. (Courtesy of Border Angels (Facebook) through VOA News)

This year’s presidential race has immigrants racing to get citizenship by the tens of thousands, according to an article in the New York Post.

Immigrants are trying to become citizens partly in hopes of securing voting rights to keep Trump out of the White House, but also to avoid deportation if his campaign is successful. With Cruz officially out of the race, Trump is the presumptive nominee for the Republican Party.

Naturalization applications are up 14 percent from this time period last year, according to the Associated Press. Of the 9 million green card holding immigrants eligible for citizenship, 4 million are Hispanic.

Trump’s pledge to build a wall on the U.S. Mexico border, block Muslims from entering the country and deport 11 million undocumented immigrants has succeeded in fear mongering, whether or not that was his aim.

In honor of Mexican “El Dia del Nino,” or “Children’s Day,” April 30, U.S. Border Patrol opened the Door of Hope, a maintenance door in the U.S.-Mexico border fence, allowing a select group of families to be reunited for three minutes.

The Door of Hope is in Friendship Park, a place for families to flock on weekends to spend time together on their respective sides of the border fence, according to an article in Voice of America.

Families appeal to be part of the event with Border Angels, the San Diego non-profit for immigration reform that organized the initiative, and an agent screens each case to make sure participants don’t have any criminal history. Border Angels hopes to make it annual event, but it has been canceled once since its inception in 2013.

Border Patrol nixed the event in 2014 because the previous year a little girl leapt into her father’s arms with no prior warning.