BOULDER, Colo. — One month after opening statements, prosecutors seeking the death penalty for defendant James Holmes are halfway through their case. Jurors can expect to start hearing from mental health experts as early as next week. Holmes, who has admitted to killing or injuring 82 people on the night of July 20, 2012, has pled not guilty to the crime by reason of insanity.

But how exactly does this plea work?

Colorado is one of 11 states in which the burden of proof in an insanity case lies with the state. That means it’s up to the prosecution to demonstrate that Holmes was sane at the time of his crime. Except for Idaho, Kansas, Montana and Utah, which do not allow insanity pleas, all other states place the burden of proof on the defendant. 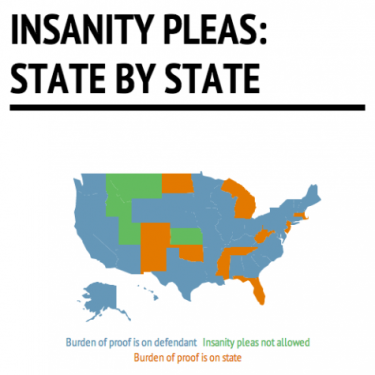 “This is an extremely bad case for the prosecution because there’s uncontested evidence that Mr. Holmes is severely mentally ill, they have to prove beyond a reasonable doubt that he was sane at the time,” president of the Colorado Criminal Defense Bar Association David Beller said in an interview. “That is a very difficult task.”

It’s no secret that Holmes has struggled with mental health issues throughout his life, but mental illness is not the same as criminal insanity. Colorado defines insanity using a modified version of what’s called the M’Naghten Rule, along with the Irresistible Impulse Test.

The M’Naghten Rule, established in England in the mid-19th century, focuses on the perpetrator’s knowledge of right and wrong. The Irresistible Impulse Test, as the name implies, focuses on whether a perpetrator is able to control his impulse to commit a crime, regardless of whether he knew it was wrong or not.

Thus in Colorado, a criminal like Holmes seeking a verdict of not guilty by reason of insanity must fit one of two criteria:

1. Be “so diseased or defective in mind at the time of the commission of the act as to be incapable of distinguishing right from wrong with respect to that act,” or

2. Suffer “from a condition of mind caused by mental disease or defect that prevented the person from forming a culpable mental state that is an essential element of a crime charged.”

These criteria have been used since 1995. Both exclude “moral obliquity, mental depravity, or passion growing out of anger, revenge, hatred, or other motives and kindred evil conditions.”

Injured victims, FBI examiners and first responders have all walked jurors through the horrors of July 20, 2012. It’s fair to say everyone in the courtroom is now familiar with the extent of Holmes’ attack.

Thanks to testimony from his landlord, professors and peers, they also understand the defendant’s intellect. He was highly intelligent, successful in undergraduate school and kept meticulous records. He was mentally capable of rigging a complex set of explosives in his apartment.

He was also, jurors have learned, an introvert. Witnesses have described him as quiet, reserved and not particularly friendly. At times he seemed disinterested in his studies, his professors said, lacking the work ethic to become a successful scientist. He was socially distant — but not detached from reality. He took prescription medication for anxiety and depression.

During the first half of its case, the prosecution has focused on the horrific nature of Holmes’ crime, his intellect and his personality. With expert testimony from mental health personnel, they will dig deeper into the question of his sanity.

Bob Grant, who successfully prosecuted the last trial in Colorado to end in execution, has been watching the trial. “I think (DA) George (Brauchler) knows what he’s doing,” he said in an interview.

But David Beller thinks they’ve got their work cut out for them under Colorado’s burden of proof law.

“My legal opinion is that despite the horrific nature of the crime, the legal standard is so incredibly high that I think the prosecution is going to have a very difficult time proving, beyond reasonable doubt, his sanity,” Beller said.

He added that he felt the prosecution would have a hard time “justifying the killing of a man due to his mental illness, even if he deemed as being sane under the law.”

Sandy Phillips, mother of theater shooting victim Jessica Ghawi, says it doesn’t matter to her whether the defendant is sentenced to death or life in prison. “I don’t care,” she said. But she is decidedly against one outcome: A verdict of not guilty by reason of insanity. That, she feels, would just lead to the defendant’s eventual release.

The prosecution has another month to plead their case, after which the defense will begin theirs. Each side will bring in witnesses, experts and evidence in the hopes that the jury of 12 will ultimately vote to uphold justice.

To Phillips, however, that’s simply not possible.

“The only thing that would be justice is if we got our children back,” she said.

Editor’s Note: CU News Corps will remember the victims of the tragedy with every post via this graphic.