None of its 2,000 residents are there for the same reason, other than that it’s their great place. A self-sufficient mountain town nestled in the foothills on Highway 36 between Boulder and Estes Park — and at the confluence of the North and South St. Vrain Creeks — Lyons is the idealistic realization of those who call it home.

Which made the September floods all the more unsettling. Musicians and artists lost their studios and galleries; schools were shut down; trails, streets and highways broke into pieces, swallowed by mud. In the wee hours of Sept.12, when the sirens began to wail, people scrambled onto rocky hillsides or their own rooftops to elevate themselves above the roaring river that had somehow made its way to their doorsteps.

The St. Vrain ripped the town into six islands. All roads in and out crumbled. But somehow, despite panic and shock, the people of Lyons managed to get out of the water’s way. Once the rains subsided, they organized themselves and began the rebuilding process.

“It’s like everyone was given a role, and they knew what it was and how to do it,” said Tamara Haddad, Lyons Chamber of Commerce administrator.

They needed immediate help, of course, and received it—from FEMA, the Red Cross, Boulder County and volunteers around the state. But the recovery process has been largely internal, driven by the residents’ desires to preserve their personal utopias.

“We’re not as complex as a city”

Julie Van Domelen moved to Lyons in 2005 and became mayor four years later. A Colorado native, she spent almost two decades with the World Bank as a senior economist and was looking to settle down with her husband and young daughter.

Van Domelen still volunteers internationally, evaluating infrastructure development programs in third-world countries. She was in Tanzania when the flooding began and arrived back in Lyons four days later, constantly checking in with her family during the 96 hours of hellish travel.

By the time she returned, many residents had been evacuated and town administrator Victoria Simonsen was leading the remaining population, holding meetings in the open space of Sandstone Park, a couple of blocks from Main Street.

“They were just on it,” Van Domelen said. “Lyons was on it, Boulder County was on it. All hands were on deck.”

Simonsen and other town officials continued to play an important part in the aftermath, but Van Domelen’s presence brought “a great synergy,” Tamara Haddad said.

“It became more than just organization at that point,” Haddad said. “It became a nurturing, empowering environment.”

Lyons set realistic goals for itself, independent of the larger post-flood initiatives led by the state and county governments. In the second half of September, many of the residents who lost their homes were living elsewhere. Some drove to Lyons during the day to take part in the relief effort; some stayed in town with neighbors, friends or family. Even those whose properties were undamaged had still lost basic amenities and were facing painful conversations with FEMA and insurance agents. But their collective focus was unwavering.

“We continued holding the public meetings to field questions and pass along important information,” said Mayor Van Domelen, herself displaced by the disaster. “The thing is, we’re not as complex as a city. You can go over to-do lists with everyone, take things day by day. People started seeing visible progress, and that’s important in remaining hopeful.”

In the first days after the weather cleared, residents communicated via handwritten notes they posted in town. They had no power, no cell service; there was no other way.

“It was just old school word-of-mouth,” Haddad said. “There was a period of time when the main thing everyone was worried about was making sure everyone else was accounted for. So a list of names went up, of people we didn’t know about. And they or someone who knew about them would come up and check them off the list and write, ‘Yep, they’re here.’”

Lyons’s overwhelming to-do list became a string of accomplishments. Six weeks after the floods, people were coming home to stay. They were able to host the Halloween Parade that lights up Main Street every fall. Utilities returned in October and November, and residents could stop boiling their water. Businesses reopened, and after Thanksgiving break, kids who had been attending school in Longmont could finally do so in their own town.

Morale rose with every passing day. Residents decorated their homes with Christmas ornaments. Even the houses that had collapsed or been swept from their foundations had festive baubles hanging next to the bright red signs that meant “uninhabitable.” 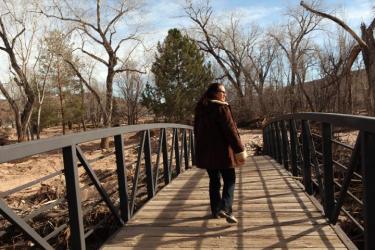 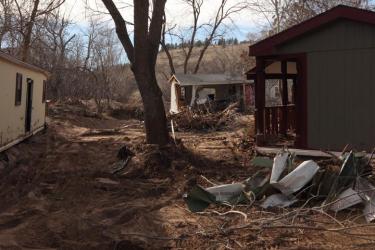 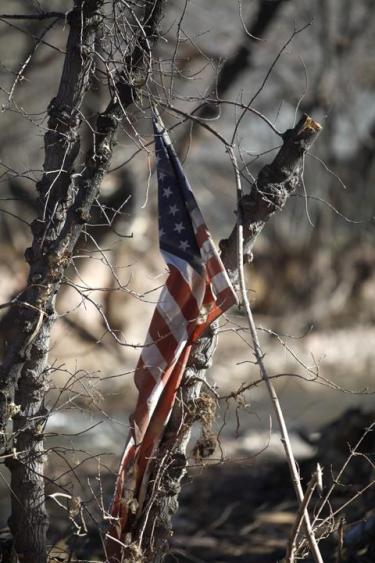 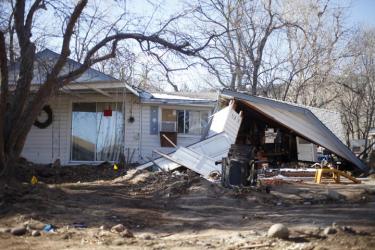 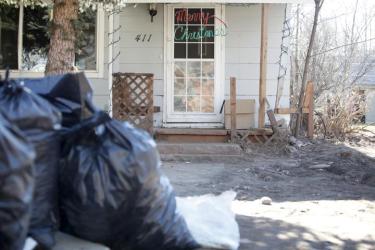 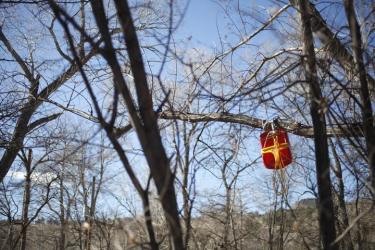 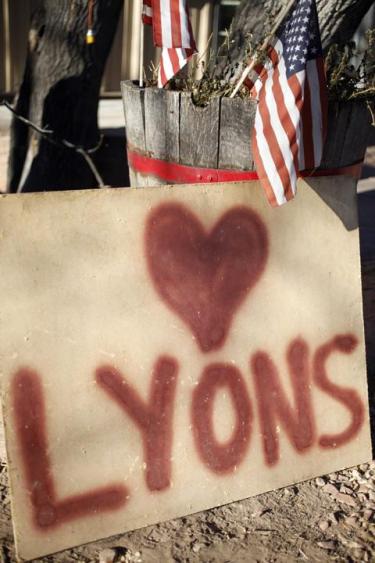 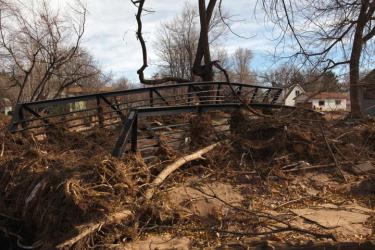 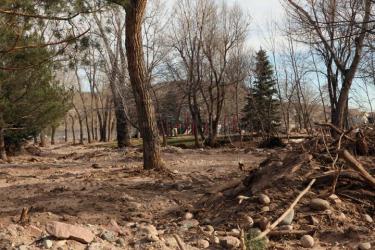 A “sense of preparedness”

“I came. I fell in love. I stayed. I think I’m an ordinary story for these parts.”

Tamara Haddad has been doing it all since September. In addition to helping her neighbors through the acts of kindness that have become a standard part of daily life in Lyons, she oversees a variety of blossoming recovery efforts from her post in the Chamber of Commerce. She’s also become a sort of spokeswoman, speaking to the media and giving tours of the town.

Haddad was attracted to Lyons by “a strong connection to the simplicity of the good living it offers,” drawn by its independence and the fact that every shop is local.

The quaint white house she shared with her husband and two children wasn’t damaged, but they decided to move anyway — “to higher ground,” she said. “You think there’s a romance to living along the river, but nope. Not anymore.”

There is another reason. A row of properties across the street from Haddad was destroyed; a woman who lived in one of them will be moving into Haddad’s former home.

Haddad wasn’t jolted by the flood sirens that sounded at 2 a.m. on Sept. 12. What roused her was her husband saying, “Get the kids.”

“Looking outside, it took a while to sink in how bad it was,” she said. “The water eventually got so high, houses were popping from their lots. The road bubbled up.”

People were being rescued soon after, but not by the National Guard — they wouldn’t arrive for another two days.

“Neighbors were using their own equipment to get to others who were isolated,” Haddad said. “Somehow, it never felt like chaos. At one point, I saw a mom and her kids and their Sheltie being driven from their home in a neighbor’s backhoe. I still get goosebumps thinking about it.”

Lyons resident Jason Bowen, a model and actor who commutes to Denver for work, was on his way to check on a friend’s elderly parents when he saw a family of seven struggling to hike above four feet of raging water. Bowen climbed over debris and waded through the shallowest level he could find to get to them.

Bowen led them safely to his neighbor’s, where the family stayed for three days.

Later, Lyons mourned the loss of 80-year-old Gerald Boland, who had moved to town in 1959. Somehow, despite the treacherous conditions, his was the only death, a “stunning” tribute to the town’s internal organization, Mayor Van Domelen said.

“Where Lyons is located, we’re aware of the flood risks, but you don’t think it’s ever actually going to happen,” she said. “But there was this sense of preparedness.”

When the National Guard did arrive, Lyons was relieved; they were finally connected to the outside world. And they could give their rescue vehicles — tractors, riding lawnmowers — a rest. 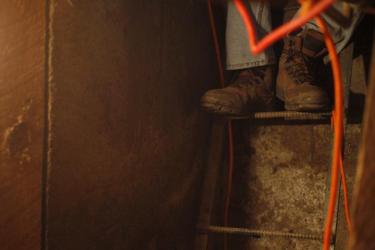 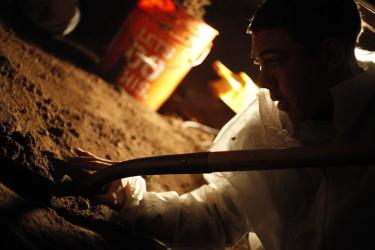 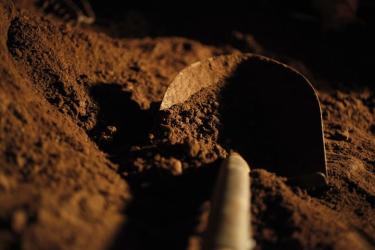 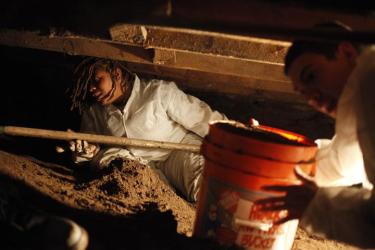 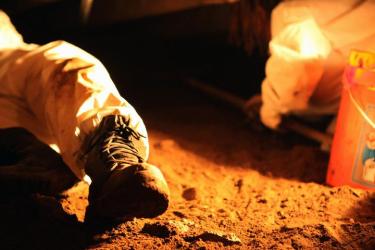 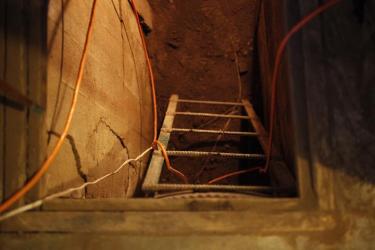 River silt will still dust anything that remains motionless for too long, but Lyons has found some sense of normalcy. It faces $50 million in overall damage and will be defined by the recovery for years to come, but the people, for the most part, have their lives back.

Jason Bowen is helping his friend Jeremy Ragland remodel a building on Main Street that was formerly an antique shop. It will serve as a place for community get-togethers, meetings of the minds for propelling Lyons into the New Year and beyond. That had always been the plan, even before September.

Lyons has always fostered expression. An artistic haven for almost half a century, it brought in people who were disenchanted by the growth of larger cities and looking for a more intimate environment. Its reputation and affordability drew Candace Shepherd here 26 years ago.

“It has a great history of being accessible, otherwise artists couldn’t move in,” Shepard said. “But it’s the lower-income housing that sits along the confluence that was hurt the most. Restoring that will be restoring Lyons.”

Shepard’s studio space stayed dry during the floods, but her house, only one lot away, did not fare as well. Volunteers from the Denver region of AmeriCorps spent days digging out the silt that had filled her basement and threatened the home’s structure. But everything is relative. “I’m fine,” she said simply. “Everybody is doing hard things.”

There are plenty of long-term issues moving forward, many of which will be influenced by state and Boulder County legislation. The town needs federal aid to enhance the stability it has provided itself.

Lyons has received approximately $4.9 million in FEMA grant money since September, according to FEMA spokesman John Mills. On a case-by-case basis for 1,194 households, FEMA dispersed $2.6 million in rental assistance and $2.3 million in other needs: home repairs, replacement of personal property, medical expenses.

“There is no blanket amount of money,” Mills said. “Assistance is determined by individual family situations and basic needs.”

Despite the variety of relief efforts, the town is still visibly scarred. Bohn Park in central Lyons was decimated. As recently as December, benches were splintered and tangled with tree branches, and the water carved out such a wide path it looks as if the once-green sprawl is an enormous, dried-out riverbed.

Somehow, a children’s playground was spared, sitting untouched atop a grassy knoll. The newly forged path of the river swerves around it. Lyons residents are grateful. Their town is a great place for kids.