Meteorologists estimate that one inch of rain generally equals about a foot of snow, depending on the snow’s density, of course. That means early December’s 6-inch snowfall, inconvenient as it may have been, was the equivalent of about a half-inch of September rain.

Now flash back just three months, when dozens of Colorado communities were drowned in the misery of a relentless surge of rainwater, mud and debris that broke its way through major portions of the state’s Front Range and Eastern Plains.

Seventeen inches of rain poured down during those eight days in mid-September. Do the math — that’s somewhere around 17 feet of snow, if that precipitation had come this month. As rain, though, the water caused a flood the National Weather Service quickly described as a 1,000-year event. The scars it carved into canyons and communities alike will remain palpable for years to come.

In those three months that have passed since the flood, the city of Boulder has managed to re-establish a facade of normalcy. City life soon fell back into routines once the waters receded and the worst – meaning most visible – impacts had been cleaned up.

Yet much work still remains to be done. The city plans to complete repairs of the water system and wastewater facility by spring 2014 and restore a majority of city areas to pre-flood conditions by the end of 2015.

Also, as nearly one-third of all Colorado households damaged by floodwaters lie within Boulder and about 15 percent of all city households were damaged (see graph), three months is barely enough to get back to normal.

Just ask Michele Vion and you’ll learn how fresh the wounds cut by disaster still are.

Physically ripping out the toilet

While the floodwaters spared Vion’s family home in South Boulder near Table Mesa, five inches of raw sewage accumulated in her basement.

A Boulder City Council summary of the flood noted: “The majority of impacts were located outside of regulatory floodplains due primarily to groundwater and sewage backups.”

Vion translated the official jargon: “The sewage came literally out of every hole.”

In her desperation, she ripped the toilet out of the ground with her bare hands, hoping to cap the welling fountain it had turned into. It did not work.

“At some point, we just gave up and waited for it to be over,” Vion said. She and her family waited six days.

Three months later, Vion’s basement is still a construction site. To physically restore normalcy in her home, the mother of five had to spend $40,000. A sewage insurance policy paid her $5,000, the Federal Emergency Management Agency (FEMA) cut a $2,000 check. Vion will spend years to repay the remaining $33,000 through a low-interest loan.

She shares her fate with many families across the city. Some, like Christine and Ari Rubin who suffered an estimated $30,000 damage, were covered by FEMA flood insurance they had just recently bought after the city mailed a postcard to their home advising them to do so. But many others are now shaken with regret because they did not do the same thing.

Faced with many residents’ anger, the city has since deliberated over possibilities to prevent similar damage from occurring. Councilwoman Suzanne Jones urged city council during a Dec. 3 “lessons learned” meeting to take immediate action.

"If we have another flood and we have these kinds of sewer backups again, people will have our heads if we haven't at least looked at this," she said.

Jeff Arthur, director of the Boulder utilities division, estimated the city will need $400 million to improve existing wastewater and stormwater infrastructure to a level where it would be able to withstand a disaster like this year’s flood. Usually, his department spends about 1 percent of that amount, or $4 million, on improvements.

He told Jones during the meeting that it was a question of how much investment the city was willing to make over time.

With an already tight budget, money is scarce within city government post-flood. Recovery costs keep rising and are currently estimated at $43 million.

FEMA will reimburse 75 percent of the city’s recovery costs, another 12.5 percent of expenses will flow back into city pockets from the state capitol, leaving Boulder with a bill of least $5 million. The bulk of that money comes from a disaster reserve fund and flex repair dollars, pretty much emptying those pots.

The situation left Boulder Mayor Matt Appelbaum worried about “the next event that is going to happen without those funds,” whether it would be a fire – “or something else.”

The immediate impact on the city’s financial situation is even worse. Boulder Chief Financial Officer Bob Eichem told city council it would take FEMA between six months and two years to transfer the money back onto city bank accounts.

However, he said, they wanted to “rebuild the reserves within one year.”

More financial help is coming from Washington, D.C. On Dec. 5, Colorado Gov. John Hickenlooper announced that the U.S. Department of Housing and Urban Development approved a $63 million cash injection “to help our communities recover from the flood.”

Days after the floods hit town, then-candidate and now elected councilman Sam Weaver said the event would “give the city a chance to assess how we did with the flood” and improve accordingly.

“We don’t want to take things back to the way they were, but we want to make them better,” finance director Eichem said. And City Manager Jane Brautigam made a case during a recent city council meeting to recover from the flood in a way that would leave the community “more resilient than before.”

While Mayor Appelbaum supports the city’s mitigation efforts, he emphasizes financially sound decisions, distributing existing funds to where they are most needed.

“For certain types of floods, there is just nothing we can do,” he said. “Especially because the water doesn’t always go where we think it is going.” 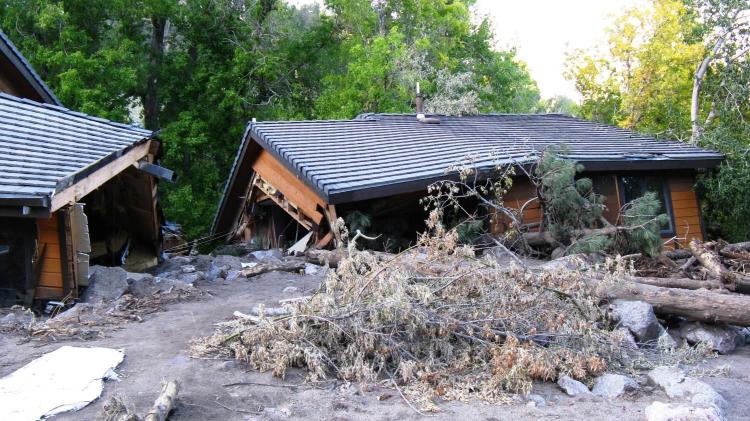 According to Boulder Chamber of Commerce CEO John Tayer, those in need are to a great extent local businesses.

“They have borne a heavy toll in terms of infrastructure damage and business disruption,” Tayer said.

As City Manager Brautigam noted in a memo sent to city council members on Dec. 3, the non-profit organization Downtown Boulder Inc. still receives calls from people asking if it was possible again for them to get to Boulder after the floods.

Tayer said there was a general sense that the flood has had a long-term economic impact because residents and tourists have reduced disposable income to spend at retail stores and in restaurants around town.

“Finally, the floods dampered tourism to our community,” Tayer said.

The Chamber president himself was among those who had to gut their basements after the floods. As did so many others, the Tayer family dealt with serious stress. His wife, Molly, the Boulder County Clerk and Recorder, had to respond to a number of unique challenges herself. It was her task to ensure that those who were displaced in the aftermath of the flood still had a chance to vote in the November elections.

Boulder city government tried to respond to local businesses struggles by partnering with Downtown Boulder Inc. and Twenty Ninth Street to run the marketing campaign “Buy into Boulder.” The ads placed in late November and December are supposed to remind holiday shoppers that for every $100 spend in Boulder, $3.41 flows into the pockets of community services and programs.

The more the city sends the message “buying and dining local,” the more money it makes through sales taxes.

New data from the U.S. Small Business Administration (SBA) shows just how much local businesses need help to get back on their feet.

The SBA has approved $7.5 million in business and economic injury loans for businesses from all around the county that were affected by the flood.

SBA spokesperson Garth MacDonald said he was unable to break down the data to city-level, but his organization would “work with Boulder County applicants to fully complete and process applications” that have yet to be approved.

Despite all the efforts, it is common political consensus that recovery efforts can be successful only in cooperation with the county.

The center is a “one-stop portal for people with their various flood-related questions and issues,” staff member Cindy Pieropan said.

Up to six employees deal with a couple dozen daily inquiries, a lot of them related to damaged or destroyed homes, access issues because of broken roads or problems with the septic system.

Pieropan said the center would remain open for at least one, but more likely two more years to deal with the aftermath of the flood.

“A flood is different than for example a fire, which doesn’t damage roads,” she explained. With winter approaching rapidly and with brutal force, it becomes increasingly hard to repair roads before spring, Pieropan said, pointing out that flood impacts tended to be long-term.

Boulder County Flood Recovery Manager Gary Sanfacon explained in a recent video-message to citizens that debris was still one of the core issues in the recovery process.

“A lot of debris has come up on private properties,” Sanfacon said. It was also still in the creeks and could pose future hazards, which is why the county started to implement a debris pick-up program, a collaborative citizen cleaning effort.

Meanwhile, the city of Boulder has managed to break down the number of key objectives for the near-term flood recovery to five. A memo to city council members lists the following activities:

The city also focuses on restoring the 10 percent of trails in the open spaces that remain closed at this point. A special case is the popular Royal Arch Trail. It was the most severely damaged of all trails in the system. OSMP director Mike Patton and his team keep evaluating best practices on how to rebuild Royal Arch Trail.

In his letter to the editor of the Daily Camera dated Oct. 8, Boulder resident Jim Martin sums up the 17 lessons he learned from the flood. Despite all the misery the devastating floods brought over the city, the county, and the state, Martin’s ultimate lesson is an acknowledgement of outstanding community recovery efforts.

Martin wrote: “There is a little bit of heaven in every disaster area.”