Boulder Valley schools sustained nearly $5 million in damage because of September's flooding, and now — nearly three months after water poured through several buildings and inundated athletics fields, playgrounds and parking lots — district officials say the repairs are nearly complete. Better yet, the repairs are virtually all paid for.

Boulder Valley School District spokesman Briggs Gamblin said that a combination flood insurance reimbursements, FEMA money from the federal government, grants from the state, and funds raised by the Colorado non-profit Impact on Education, will cover almost all of BVSD’s losses.

“One of the things about a crisis is that people don’t stop and ask, ‘Is that my area?’ People just do it. People organize quickly and they identify needs quickly,” Gamblin said.

Boulder Valley School District is the seventh largest school district in Colorado. More than half of BVSD’s buildings were damaged in September’s floods and four of those buildings received, “moderate to severe damage,” according to a letter written by Superintendent Bruce K. Messinger to Colorado Gov. John Hickenlooper. This wasn’t the first flood Boulder experienced, but it was unique in the challenges it presented, Gamblin said. The floods blocked off access to all of Boulder’s major canyons, making made BVSD’s job of getting help to the schools, students, and teachers difficult, but even more imperative.

But it was two elementary schools — Crest View in north Boulder and Jamestown Elementary in Jamestown — that suffered the most damage and disruption. Flood waters surged through 85 percent of Crest View and kept kids out of school for longer than two weeks. Jamestown Elementary didn't sustain as much damage, but the town's near-total evacuation forced the school to split into two units housed in different buildings, neither in Jamestown.

"We’re still not recovered," said Jill Williams, a kindergarten enrichment teacher at Crest View. "I think it won’t really be right until spring and maybe not completely normal until next fall.” 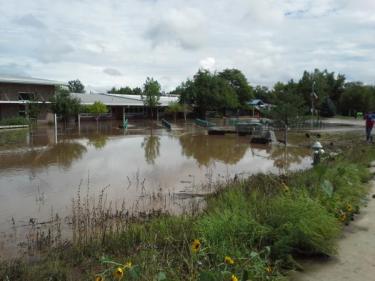 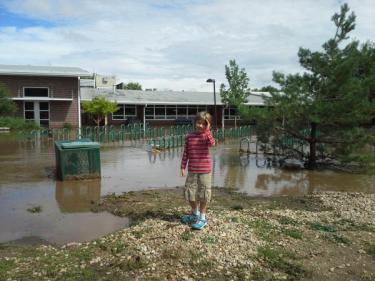 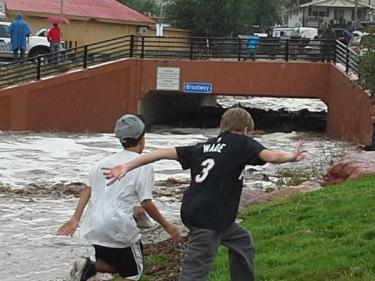 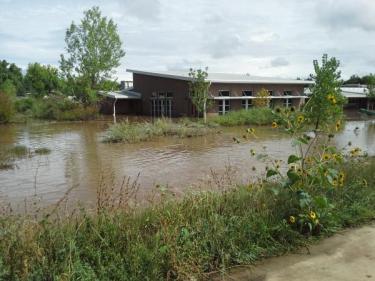 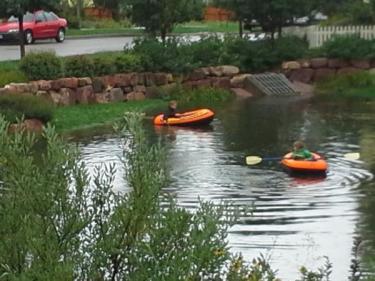 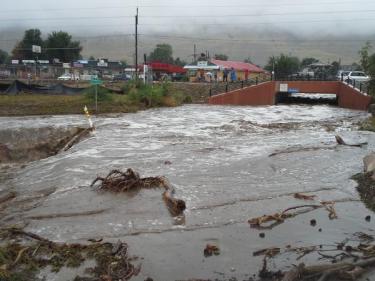 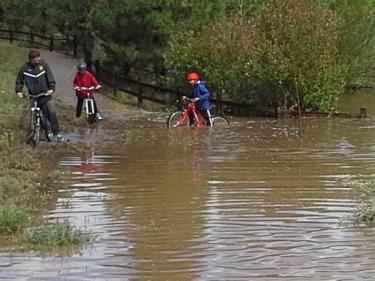 Merlyn Holmes was awakened by a phone call during the night of Sept. 12.

“Our first thoughts were, ‘Oh goody, we have a rain day!’ We were a bit slow on the uptake. It seemed more like a snow day than an emergency,” Holmes said.

As the day progressed, however, Holmes and her family quickly realized the severity of the rain. The family walked to the Broadway underpass near their house, and realized the flood waters were raging.

“Our big question was: where were these waters going?” Holmes said. “It was only later the next day that we visited Crest View and we were shocked at seeing all the flood damage. There was a waterfall going through the playground.”

Officials realized the challenge that lay before them on Thursday, Sept. 12.

“The one school that really sustained some damage beyond that which could be handled by our maintenance people was Crest View Elementary School,” Gamblin said.

Holmes’ 6-year-old son, Landryk, was out of school for two-and-a-half weeks.

“We did a lot of juggling at that time with work schedules and trying to figure out what would be best for our son,” she said.

An alternate program was made available through a partnership between BVSD and the YMCA. Teachers and some substitutes held classes at the Lafayette YMCA, including Williams, whose class became very interested in learning about rain.

“It was only natural to look out the window and talk about something we were experiencing and feeling depressed over, together,” Williams said. She shared the book “What Makes Rain: the Story of a Raindrop” with her kindergarteners.

Williams said that other teachers connected with their students during the flood in a multitude of ways, including video lessons and websites set up with lessons and educational material.

Buses were provided for students to attend the program, which was offered at $50 per day to families and at no cost to those who self-identified as being on free and reduced-price lunch programs.

Volunteers offered to help at the school, Gamblin said, but because of health and safety concerns, professionals had to be brought in to do the job first. Thirteen days of non-stop construction and repair work aided in recovering the school from much of the damage. “Machines were clunking away at Crest View at 3 a.m.,” Gamblin said. “The neighbors were great. They also suffered damage and they were very supportive.”

Anything that was absorbent had to go — materials, books, shelving, drywall, and carpets. What could be salvaged was loaded into unmarked cardboard boxes for teachers to sort through once they were allowed to return to the building.

Home Depot built shelving for teachers and puppet theaters for the kindergarten classrooms. Numerous businesses and other schools donated supplies and books to Crest View.

"KidKraft donated free items to the kindergarten teachers, so I received a dollhouse for my room," Williams said.

SERVPRO, the company in charge of cleaning and restoration of the school, also threw a Halloween party for their own staff and Crest View faculty.

The school’s outdoor vegetable garden and its habitat and wetlands areas are still damaged. Asbestos and mold tests are continuing to be conducted throughout the year. And until recently, hot lunches were prepared off-site and brought to the school for lunchtime.

But is the school back to “normal" yet?

“Kids are so adaptable at this age,” Holmes said. The students were able to settle back into a day-to-day routine of learning, “even when they were on concrete floors and had no books on the shelves.”

Williams credited the school's community and Principal Ned Levine, calling them both "amazing."

“We never could have recovered without either of them," Williams said.

Gamblin acknowledged neither he nor the school district, in the immediate aftermath of the flood, knew exactly how big a challenge BVSD faced.

Holmes said that although there is always room for improvement, she was impressed with how BVSD has handled the situation.

“The one area where I hope all this will have a lasting impact on the children is in not taking things for granted and being grateful. I know we parents feel that and I’m sure the staff and faculty do, too,” Holmes said. “Some children donated their life savings — their piggy banks — to the Crest View fund. They were aware that this was a big deal and they were really happy to have a school to go to and to help.”

Teachers adapted lesson plans to help students understand the flood and its impact. They asked: How does a rain cycle work? Why is rain good for our planet and how could it be harmful in a flood? And maybe most importantly: How can we help our community?

This lesson wasn't just one for the kids. It was one for the adults, too, one they're still learning as they try to get back to "normal."

A home for Jamestown Elementary

Jamestown Elementary School was also a challenge, but for different reasons, Gamblin said.

The school was used as an evacuation center for the town and “will need some soap and water,” he said.

Jamestown’s challenge is on a different level than Crest View’s.

The school is intact and the students are learning. The town, meanwhile, faces an overhaul, leaving the school to play a waiting game.

Jamestown, Colo., suffered extreme devastation after September’s floods. With only some roads recently repaired, structures still damaged, and a water distribution system that remains offline, the town’s school, Jamestown Elementary, was forced to split and relocate for the year.

After September’s floods, Beth Brotherton, Principal Scott Boesel's assistant, decided to remain in her home in Jamestown and with her students.

The new "Jamestown West" recently settled into its new home for the year in Glacier View Ranch at Colorado Mountain Conference Center in Ward, Colo. The school currently has 14 students in first through fifth grade and two instructors, including Brotherton.

Meanwhile, "Jamestown East" is located in a classroom in Community Montessori in Boulder. The classroom is home to six students in third through fifth grade, and one part-time kindergartener. The students’ teacher from Jamestown Elementary went with her students to their new classroom in Boulder.

Many families from Jamestown Elementary are open-enrolled and their homes are located above the mountains. They received minimal water damage, Brotherton said. Shortly after the flood, The families met to discuss what would be best for the town, their children’s education, and for the well-being of each of their families.

One first grader’s family offered its home to use as a school. The local volunteer fire department helped bring in tables for students to work on. Carpets were removed and a cork floor was installed.

On the first Wednesday back in class, 16 children showed up to their new classroom.

Volunteers came to teach music lessons twice a week. Recess was held in the backyard with a swing set and fort, and the kids ate lunch at the picnic tables outside.

This temporary school was something the children will remember forever. It couldn’t last, though.

“The district brought us all together and asked us what we wanted. We knew we couldn’t legally stay there,” Brotherton said.

BVSD planned to use modular classrooms on the property of Glacier View Ranch. But between high costs, wind, and the trouble of transporting the modulars along the severely damaged roads, officials quickly realized this wouldn’t work.

The district negotiated with Glacier View Ranch to use a building on the property. “A beautiful log cabin, actually. It’s as big as Jamestown Town Hall,” Brotherton said.

Brotherton said learning is definitely happening at Glacier View Ranch. The building is “very homey... It’s a good place for the kids.”

“It really is amazing how well it’s working out,” Brotherton said. “We feel really safe up there. The district really took care of us. They did a good job.”

Listen to the audio story below by Lauren Maslen to learn about how Homestar Child Development Center was affected by the flood. Below that is a video story by Joseph Wirth on Boulder's Waldorf Kindergarten.