The horses are at it again.

Restless hooves beat sand and silt into the air. Trots evolve into canters as mustangs and miniatures dance to an impatient rhythm under a Rocky Mountain sky.

“What is going on out there today?” Sara Martinelli murmurs to herself, moving to stand by the barn’s window.

Cool, white manes whip around in the autumn wind, a sign an iron-shoed tempest is slowly brewing.

Rubbing a tiny, silver horseshoe necklace between her thumb and index finger, Martinelli, the co-owner of Three Leaf Farm in Lafayette, Colo., trains her eye on the instigators — two minis named Cricket and Merlin.

Maybe it’s something in the air. Maybe there’s not enough hay. But Martinelli knows better.

Her irritated equines are yet another consequence of the flood.

Bordering Coal Creek, the 10-acre urban farm in Boulder County didn’t stand a chance when flood waters ravaged the region in mid-September, turning vegetable fields into a muddy stew, and meadows into lakes.

Now, over a month later, the back pasture is still a wasteland of grimy debris. The farm’s nine horses haven’t been able to return to their usual quarters, and instead spend their days in the farm’s west paddock.

“It’s a little small for this many horses,” Martinelli observes. “Something has been going on with them for the last couple days where they won’t stop arguing.”

She calls out to a farmhand to set out another bale of hay. Maybe that will pacify them.

But horses aren’t the only thing Martinelli has to worry about.

At the time the flood hit, the Martinellis were only days away from their big fall harvest.

“Right around the fall equinox is when we get all our winter squashes, pumpkins, tomatoes, final peppers — one more week and we probably would have harvested most of the crop.”

And they weren’t alone. Farmers throughout the county were hit hard by the flood, which contaminated fields and inundated barns and greenhouses.

The U.S. Geological Survey estimates a total of 28,525 acres of crops and 39,000 acres of pasture and rangeland were flooded in the Front Range.

According to the Federal Food, Drug, and Cosmetic Act, if the edible portion of a crop is exposed to flood waters it is considered adulterated and should not enter human food channels. Flood waters can contain a myriad of toxins, including pesticides, molds, E.coli, salmonella and heavy metals, such as lead, arsenic and mercury.

“Most of the farmers we’re talking to are still in the process of figuring out what they’re going to do next year,” says Michael Brownlee, co-founder of the Local Food Shift Group that helped to establish the Front Range Farm Relief Fund. “We think some of the farms that were significantly damaged may go out of business.”

In addition to contaminated fields, Brownlee explains the flood destroyed the county’s ditch system, which provides irrigation water for local farms. The price tag to repair the system is over $200 million.

“There’s a lot of uncertainty and chaos and exhaustion. The farmers have been working so hard to clean up and get the debris out of their fields, and trying to figure out how to pull money together to get through the winter. Emotionally and financially, many of them are in very difficult shape.”

Out in the fields, Martinelli kicks up a pitiful carrot with her mahogany cowboy boot. She gives it a look of defeat.

“Half of the field got swept away by the river,” she says. “When the water went down, and the sun came back out, we had the most beautiful tomatoes that we’ve ever had. And we had to just throw them all away.”

“We didn’t do any tests. We did the chicken test,” she says with a dry laugh.

At first, Sara was hopeful they could use some of the spoiled produce as food for the animals. One day, after the flood, she delivered a mound of squashes to her chicken house.

“The next day there was two dead chickens.”

Instead, the Martinellis, who operate several notable area restaurants like the Chautauqua Dining Hall and Boulder Dushanbe Tea House, sold off some pumpkins and butternut squashes as fall decorations. The rest had to be burned.

“It was very upsetting for Chase because it was a whole year of work,” Martinelli says, watching the vivid green, John Deere tractor move through the pallid, washed-out rows of vegetables.

Sitting atop the growling piece of machinery, winter hat pulled low, Morris, who lives on the farm year-round with his wife, recalls the night of the flood.

“It was kind of exciting at first, but after that, once I saw all the damage, it was disheartening.”

A Michigan native new to farming, Morris initially hoped it would be possible to boil the vegetables to kill the bacteria. But after contacting CSU, he realized it was the heavy metals that had done the damage.

Now, his focus is on the coming winter.

“Right now I’m tilling the fields under, composting and covering crops. We have carrots in the ground still that, according to the CSU extension, might be OK after 120 days, since the heavy metals will oxidize and the bacteria won’t be a problem anymore.”

According to the Food and Drug Administration, the wait time before growers can replant depends upon temperature, weather and soil type. While no all-encompassing measure exists, most industry specialists recommend a 30- to 60-day period. However, in the case of Three Leaf Farm, the wait time is roughly double the usual standard.

Down by the creek, Martinelli strolls through a ghost town of abandoned bee houses where combs have run dry.

Dusty stalks and sticks coagulate in the trees — a phenomenon that runs on for acres and troubles Martinelli.

“The biggest threat to us would normally be a small grass fire on the property. With this kind of debris way up into the trees, we have to get through here and get it all out.”

Already the Martinellis have enlisted the help of several volunteers to roll up flat drip tape and rip out collapsing fences.

“Normally, we would be planting some greens — some spinach, arugulas, garlics and onions. We would have gotten a final harvest of greens for this year.”

Instead the Martinellis plan on burning all winter.

Plodding her way through the muck, which still acts like quicksand in some areas, Martinelli clambers up a pile of rocks deposited by the swollen waters.

“The further away [from the barn], the more depressed I get. All these rocks, and rocks….”

“It’s just a lot of work,” she concludes, her voice tightening. “But we’ll get there. We’ll figure it out. We’re still lucky.”

Back at the stables, Martinelli stops by to visit her personal horse, Finn, a black-and-white gentle giant closing in on 14 years.

The hay has done the trick. Zephyr, Warlock and Blue huddle together peacefully, munching down on the yellow strands.

Her long blonde hair tied back in a ponytail, tucked under a straw cowboy hat, Martinelli bends over to give Finn a kiss on the nose.

“I had friends of friends up in Lyons, and they had eight horses. They stuffed five horses in a four-horse trailer and had to set three of them free.”

She gives Finn a soft pat on the muzzle.

“The flood was very stressful. It was very overwhelming. We lost all of our crops, but we were able to come back the next day, put the horses in the barn and get back to work. So many people can’t say that.” 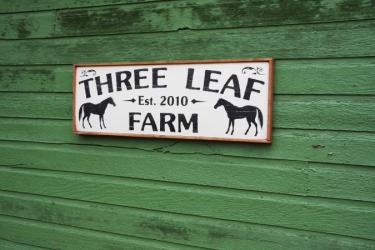 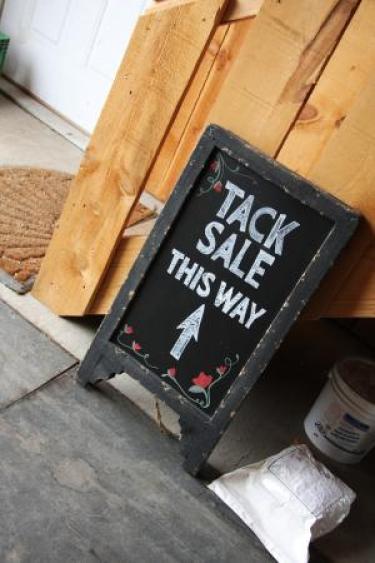 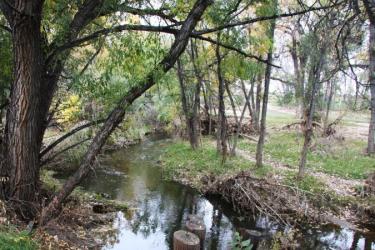 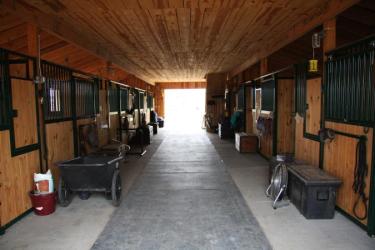 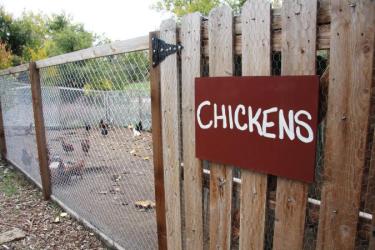 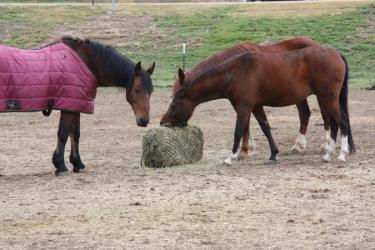 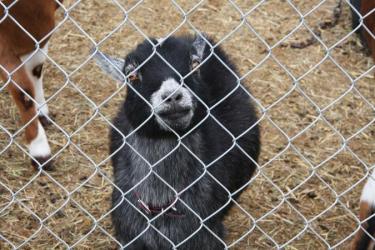 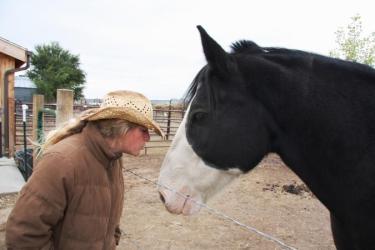 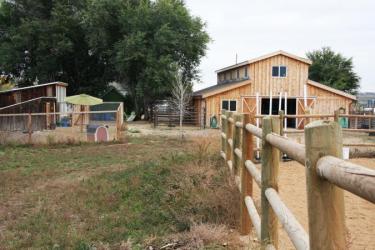 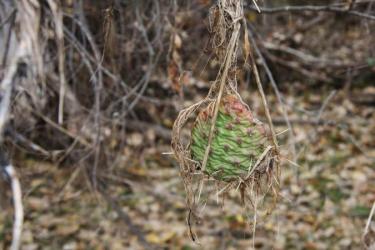 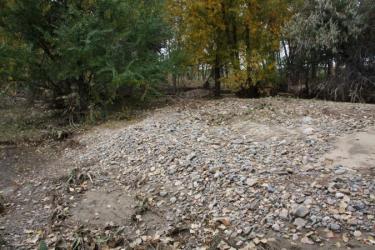 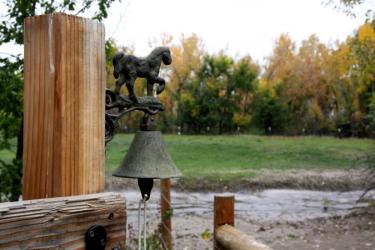 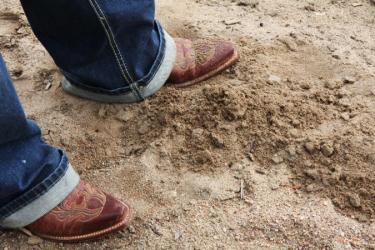 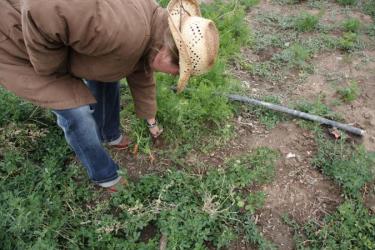 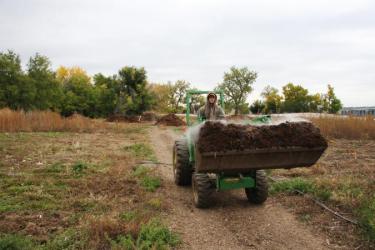 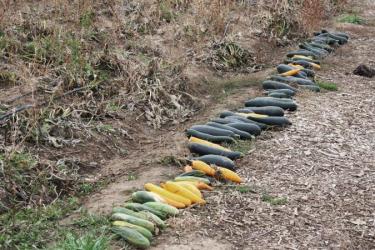 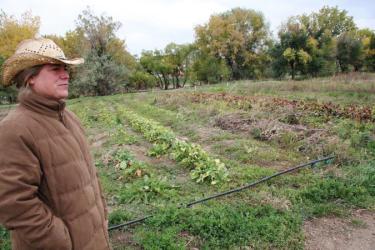 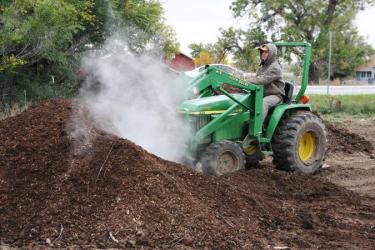 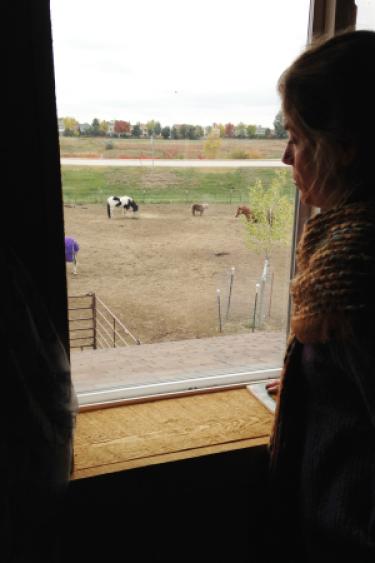