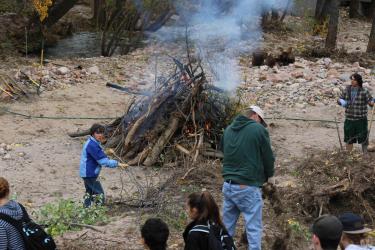 Volunteers stoke and tend the bonfire near Jeremy Barnes' house between Boulder and Lyons, Colo., Oct. 12, 2013. Barnes' house was nearly destroyed in the September flood that devastated the town. Photo by Emilie Bierschenk.

Jeremy Barnes moves from bonfire to bonfire, as nearly 100 volunteers pick up and burn the debris that covers his flood-damaged property.

Since last month’s floods devastated Barnes’ home near the intersection of Middle Fork Road and U.S. Route 36 in Boulder County, hundreds of people have come to help. On Saturday, Lutheran and Latter Day Saints church groups worked side-by-side with University of Colorado Engineers Without Borders students and other community members.

“It’s wild,” Barnes said. “It’s amazing. These people - what they’re doing just today would take me more than three months of labor. They come out, they do this for a day or two days and they’re passionate about it, they’re having fun, they’re thorough. We’ve had at least 400 people put a day's work into this.” 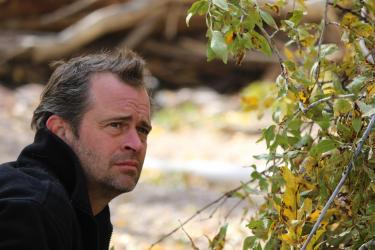 Jeremy Barnes looks on as volunteers from across the Front Range help him rebuild the house that was nearly destroyed in September's flood. Photo by Emilie Bierschenk.

When Left Hand Creek flooded on Sept. 11, Barnes and his family made it only as far as their white Volkswagen before realizing they were stuck.

“We had to be rescued with our cat,” Barnes said. “He was in a laundry basket, and he didn’t like that at all. The fire department walked us out, and the deepest water I stepped into on the walk out was about six feet deep, but it got deeper after we left.”

Students from CU’s Engineers Without Borders group, an organization normally devoted to international relief work, said they jumped at the opportunity to lend a hand close to home.

“It’s not that we feel obligated to come, we just genuinely want to help,” said Madori Patterson, an Engineers Without Borders freshman. “The core of the program is all about helping people and especially when it’s right in our own backyard.” 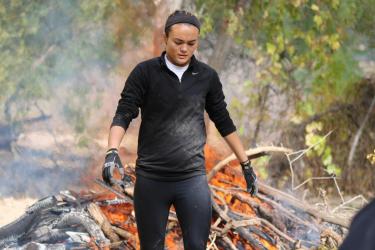 Naomi Doerr came with nine other members of St. Philip Lutheran Church in Littleton to offer her assistance.

“Sometimes Lutherans are not quick to get out there, but they’ll stay for the long haul,” Doerr said. “Bad things happen in our lives, but it’s a matter of what we do with it and how we choose to respond. We all have a need for belonging to something larger than ourselves.”

When Nathan Segovia heard about the flooding, he said he left New Orleans and made his way to Boulder as fast as he could to help with disaster relief, and lucked into meeting Barnes. He now lives in the empty skeleton of a house that remains, and Barnes has hired him to oversee volunteers and help with manual labor.

“I came to Boulder on Sept. 20 and worked in a few places around the city,” Segovia said. “I ended up here about a week later and I’ve been here since. I’ve been [Barnes’] right-hand, doing a lot of the heavy labor and organizing. There’s so much to do. If I had the ability to do all this without getting paid I would.” 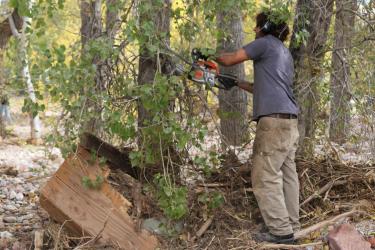 Segovia plans to work with Barnes through the winter and as long as he’s needed.

“I feel like I was brought here for a reason, and it’s incredible to meet all these people,” Segovia said. “I got a hotel room last night and had a real shower for the first time in a week or two. It’s just been crazy with so many people. There’s been three days in a row with 100 or more people out here.”

Barnes, who was self-employed doing crisis mitigation for companies before the flood, has had to devote all his time since the devastation to overseeing repairs on his home and property.

The immediate goal, Barnes said, is to eliminate as much debris as possible and minimize fire hazard. He hopes to secure the house and seal the outside walls so he and his family can move back before winter.

This story was also published by the Boulder Daily Camera.