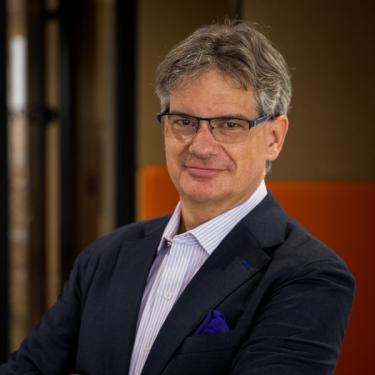 Paul is the International Ambassador for SAP Japan’s Office of Globalization, supporting Japan-headquartered company executives and board members to further their globalization initiatives and leverage their SAP software investments. A keen advocate of sustainability, he’s also a leader of SAP’s customer enabling strategies for Sustainability Governance and ESG Compliance in the APJ (Asia Pacific Japan) region. Though he focused on Western Europe while at CU, including a junior year abroad at the University of Lancaster in the United Kingdom, Paul moved to Japan in 1991 where he joined the largest engineering and construction company in Japan as their first non-Japanese salesman selling environmental remediation solutions to the global energy sector, working extensively in Eastern Europe, Russia and Canada. In 1998 he began a management consulting career across Asia and Oceania, initially with Deloitte Consulting and Cap Gemini Ernst & Young in Sydney, Australia, and then with Peoplesoft, Headstrong Capital and Genpact in Tokyo and Shanghai.  In 2015 he founded a smart building & sustainability solutions integration company in Singapore & Shanghai servicing the industrial real estate sector across Asia. He sold this company before joining SAP. Paul has attended the Stanford-National University of Singapore International Management Program, MIT’s Beyond Smart Cities Program and completed numerous certificate programs in the areas of Sustainably, Finance and Design Thinking.  Paul advises multiple Asia-based start-ups in a variety of sustainability fields and mentors International Affairs upperclassmen at CU Boulder. Paul and his Japanese wife currently live in Tokyo and their three adult children live in the United States.