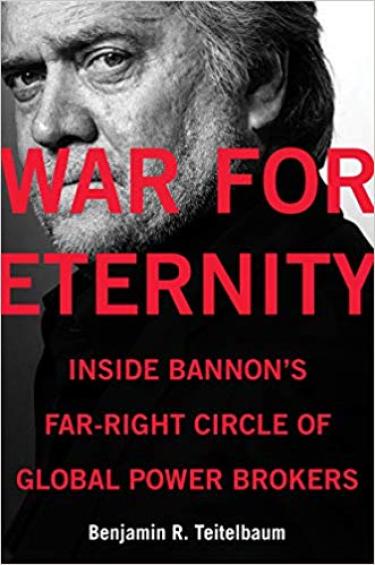 Benjamin R. Teitelbaum is a professor of ethnomusicology and international affairs at the University of Colorado Boulder, and is an award-winning expert on the radical right. He latest book, War for Eternity: Inside Bannon's Far-Right Circle of Global Power Brokers, is now available on Amazon (click here) for pre-sale.

An explosive and unprecedented inside look at Steve Bannon's entourage of global powerbrokers and the hidden alliances shaping today's geopolitical upheaval.

In 2015, Bloomberg News named Steve Bannon “the most dangerous political operative in America.” Since then, he has grown exponentially more powerful—and not only in the United States. In this groundbreaking and urgent account, award-winning scholar of the radical right Benjamin Teitelbaum takes readers behind-the-scenes of Bannon's global campaign against modernity.

Inspired by a radical twentieth-century ideology called Traditionalism, Bannon and a small group of right-wing powerbrokers are planning new political mobilizations on a global scale—discussed and debated in secret meetings organized by Bannon in hotel suites and private apartments in DC, Europe and South America. Their goal? To upend the world order and reorganize geopolitics on the basis of archaic values rather than modern ideals of democracy, freedom, social progress, and human rights. Their strenuous efforts are already producing results, from the fortification of borders throughout the world and the targeting of immigrants, to the undermining of the European Union and United States governments, and the expansion of Russian influence.

Drawing from exclusive interviews with Bannon’s hidden network of far-right thinkers, years of academic research into the radical right, and with unprecedented access to the esoteric salons where they meet, Teitelbaum exposes their considerable impact on the world and their radical vision for the future.