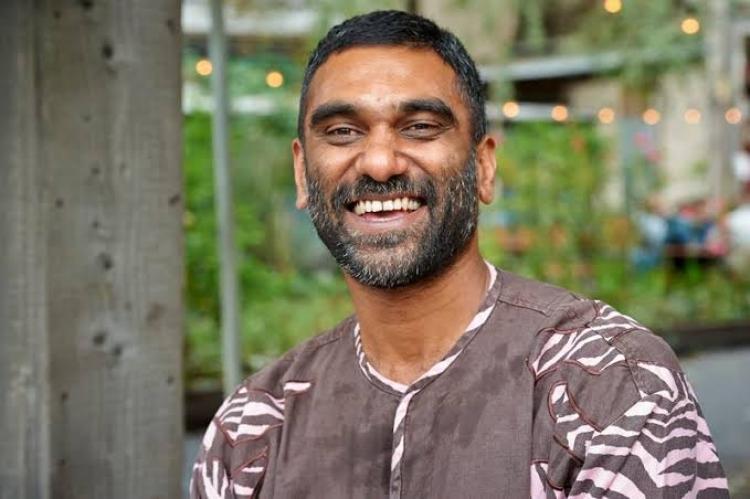 Born in Durban, South Africa, in 1965, Naidoo has spent more than 40 years as a human rights and environmental activist. His activism has taken him from Greenland to the streets of Glasgow, Scotland, where he joined protests at the 2021 United Nations Climate Change Conference, or COP26. His life’s work emerged early: At age 15, Naidoo participated in school boycotts against apartheid, South Africa’s system of institutionalized racial oppression, for which he was expelled. After multiple arrests, Naidoo was forced to flee the country in the 1980s and lived in exile in the United Kingdom, where he earned a doctorate in political sociology from Oxford University.

Naidoo noted that he’s seen firsthand how young people can create positive change in the world. It was his own daughter, Naomi, who convinced him to get involved in the struggle against climate change.

“For a very long time and still today, it is young people who have been advocating for climate awareness and transformation because they are aware of what is at stake if drastic measures are not taken to address it,” Naidoo said. “However, the youth did not create this crisis, so I listened and learned from my daughter.”

The Dec. 1–4 summit, co-hosted by United Nations Human Rights and CU Boulder, will bring to campus thought leaders, youth activists, and scientific, political, educational, cultural and industry experts from around the world for public keynote addresses and panels exploring how climate change impacts fundamental rights, including the right to food, safe water, housing and health.

“We are truly humbled to have Kumi Naidoo deliver a keynote address at the Right Here, Right Now Global Climate Summit,” said Seth Marder, director of the Renewable and Sustainable Energy Institute (RASEI) at CU Boulder and one of three chairs of the summit’s steering committee. “Throughout his entire career, he has been a leading activist on human rights issues and brings a truly unique and holistic view to climate change as a human rights issue.”

Marder said Naidoo will “challenge and inspire our global community to understand its responsibilities  and take action to address it.”

Naidoo will join keynote speakers Mary Robinson, former president of Ireland, and Indigenous rights leader Sheila Watt-Cloutier. More than 30 other speakers and panelists from Chile, Uganda, the Philippines and beyond will join the summit this December. Members of the public will be able to join via livestream.

Naidoo said he wants to use his keynote speech to emphasize the urgent need for boldness on climate change.

“What we, as humanity, do in the next eight years will determine the type of future humanity will face,” Naidoo said. “Hopefully, the audience will be inspired to take bold action, get involved in fights for social and environmental justice, be creative, use all the tools they have available, and put pressure on leaders, governments, philanthropists and activists to act with greater urgency.”

He is currently a senior advisor for the Community Arts Network (CAN), an organization that seeks to create social impact through the arts, and a special advisor to the Green Economy Coalition. He is professor of practice at Thunderbird School of Global Management at Arizona State University and continues to serve as a global ambassador for Africans Rising for Justice, Peace and Dignity.