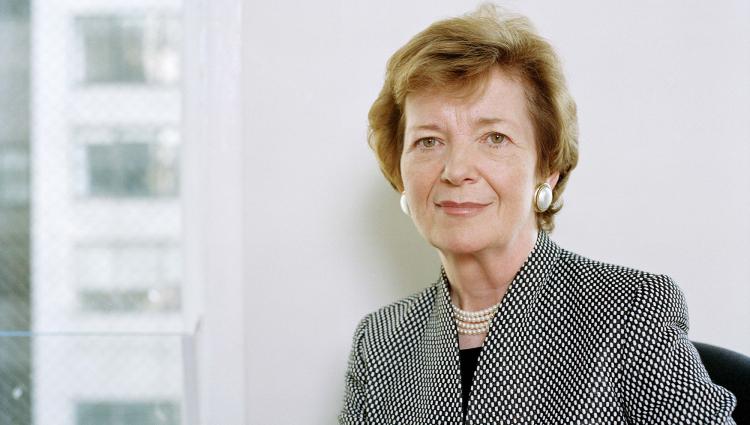 We pose five questions to former President of Ireland Mary Robinson, who is among the featured speakers at the first Right Here, Right Now Global Climate Summit. Former U.N. high commissioner of human rights and author of the 2019 bestseller Climate Justice: Hope, Resilience, and the Fight for a Sustainable Future, Robinson is credited with helping to reframe the narrative around climate change to emphasize its effects on vulnerable populations, including women, Indigenous peoples and the poor.

When and how did you begin to focus on climate change as a priority?

I came to the issue of climate change later in my life. In 2003, I was working on my organization Realizing Rights: The Ethical Globalization Initiative to advance economic, social and cultural rights, particularly in African countries. For quite some time, I have prioritized the right to food, safe water, health education and decent opportunities for work—alongside civil and political rights. As I traveled around African countries around this period, I kept encountering the issue of climate change. People would tell me how much worse things were due to droughts, floods, unpredictable weather and crop yields. I realized that advocating for the rights of the most vulnerable people would not have an effect without paying attention to our world’s changing climate.

How do you define climate justice?

People suffering the most grave impacts of climate change often come from communities that are the least responsible for the pollution that is warming the Earth. They are often overlooked in climate change policy discussions. Hearing their stories has made me very aware of the fact that the fight against climate change is fundamentally about human rights and securing justice for those suffering from its impact. To me, climate justice is about putting people at the heart of solutions.

What positive signs do you see when it comes to combating climate change?

Between 2015 and 2018, global emissions of carbon dioxide from the burning of fossil fuels leveled off after rising for decades. But sadly, more recently, major emitters are not keeping their pledges, and the war in Ukraine is making this worse. However, the good news is at COP26, all governments and the private sector were aligned to the need to stay at or below 1.5 degrees Celsius of warming. What is needed is implementation.

What more is needed from the global community to address this threat?

A global effort is still needed to hold warming to well below 2 degrees Celsius above pre- industrial levels in order to save millions of vulnerable people living along the world’s coastlines. While the Paris climate agreement remains an unprecedented success, it is also fragile. The movement to address climate change must be handled with even more urgency and determination. All of us—governments both powerfulful and small, prosperous and impoverished; cities; communities; individuals; and universities, too—are responsible. We must all take up this challenge. The threat to our planet is dire, but the opportunity to stop it—while also conquering poverty and inequality—is historic.

How important are sustainable energy and land use practices in addressing climate change?

Economic growth built on sustainable energy and land use will safeguard the lives of the most vulnerable from the effects of climate change and offer the best chance of lifting more communities out of poverty. If we follow the example of people on the frontlines of climate change, we can find silver linings of resilience and hope in the belief that we can indeed effect change.