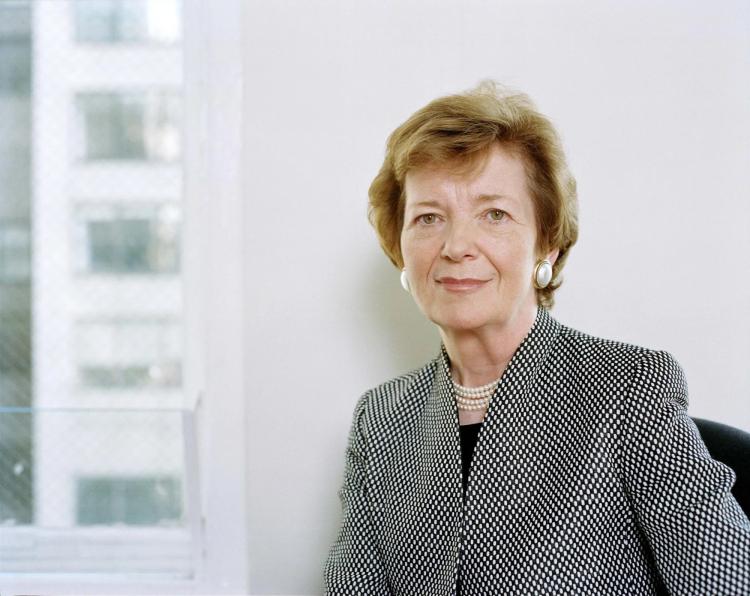 Mary Robinson, one of the world’s most respected advocates for climate justice and the former president of Ireland, will visit CU Boulder in December to present a keynote speech at the inaugural Right Here, Right Now Global Climate Summit.

The Dec. 1–4 event, co-hosted with United Nation Human Rights, will bring thought leaders, youth activists, scientific, political, educational, cultural and industry experts from around the world to campus for public keynotes and panels exploring how climate change impacts fundamental rights, including the right to food, safe water, housing and health.

Participants will also commit to specific goals to slow climate change and address its adverse effects on people.

Robinson, a former U.N. High Commissioner of Human Rights and author of the 2019 bestseller Climate Justice: Hope, Resilience, and the Fight for a Sustainable Future, is credited with helping to reframe the narrative around climate change to emphasize its effects on vulnerable populations, including women, Indigenous peoples and the poor. She is the first of several keynote speakers to be announced.

“Mary Robinson is a towering figure in the global campaign for human rights and has pioneered efforts to advance justice in the face of the challenges of climate change,” said Jim Anaya, a distinguished professor at Colorado Law and chair of the Right Here, Right Now summit steering committee. “She will undoubtedly elevate awareness and discussion at the summit about the human rights crises presented by global warming."

A constitutional lawyer educated at Trinity College and King’s Inns in Dublin and Harvard University, Robinson rose to global prominence from 1990–97 as the first woman elected president of Ireland. She served as the U.N. High Commissioner for Human Rights from 1997–2002.

She centered her focus on the human impacts of climate change late in her career after, during a visit to Africa in the early 2000s, she witnessed them first-hand.

“No matter where I went, I kept hearing variations on the same phrase: ‘But things are so much worse now’,” she writes in her book, recalling farmers in Africa whose harvests failed to arrive or whose crops and villages were washed away by floods. “In the past, I had seen images of stranded polar bears and the disappearance of ancient glaciers, but these stories from the front lines of climate change suddenly began to match the scientific findings I was reading about.”

She had a realization: Climate change was no longer a scientific abstraction but a human-caused phenomenon that impacted people—primarily the most vulnerable.

She founded the Mary Robinson Foundation (2010–19) to give voice to disempowered people already facing the consequences of a warming planet, and to call attention to the fact that it is often the communities who contribute the least greenhouse gas emissions that are most negatively affected by climate change. She also served as the U.N. Special Envoy on Climate Change from 2014–15, working to connect developing and rich, industrialized nations for a richer exchange of ideas about solutions.

As chair of The Elders, an independent group of global leaders including President Jimmy Carter and former U.N. Secretary General Ban Ki-moon, she continues to work for gender equality, women’s participation in peace building, human dignity and climate justice.

In awarding her with the Presidential Medal of Freedom, President Barack Obama described Robinson as an “advocate for the forgotten and the ignored” who has “not only shone a light on human suffering, but illuminated a better future for our world.”