My long-term research area is the textual and intellectual culture of early China, particularly in the Warring States Period (453–221 BCE) and the early empire from the late third century BCE to the late second century CE. I am interested in contemporary notions of textual identity, the modes and social contexts of the composition of texts, as well as their actual uses and modes of transmission.

Transmitted early Chinese literature has been handed down to us in the shape it was given chiefly in the first century BCE, when imperial librarians reconstructed the textual heritage of several culturally and politically diverse states, which had been unified as the Qin and continued as the Han empire. Not just what we know today as chapters of books but also these chapters themselves are composed of shorter textual units. These textual units in all likelihood existed independently and potentially in diverse contexts, before they were collected, systematized and shaped into the larger texts and compilations, which were then transmitted to us in a process that must still have included many intentional or inadvertent changes.

My first book, Guan ren: Texte der altchinesischen Literatur zur Charakterkunde und Beamtenrekrutierung [Early Chinese Texts on Characterology and the Recruitment of Officials], employs methods of historical textual criticism to identify and partly reconstruct shared textual material in a number of parallel texts and to explore the social contexts from which the pragmatic texts stem that were later used as material for composing these transmitted texts.

With the increasing availability of excavated manuscripts from early China, I began to shift the center of my research toward this new material. I conducted a research project titled "Towards a Methodology for the Study of Ancient Chinese Manuscripts" at the University of Hamburg (2002–2005) and continued this research at the University of Chicago (2006–07).

During my stay at the Institute for Advanced Study in Princeton (2011-12), I completed the monograph The Embodied Text: Establishing Textual Identity in Early Chinese Manuscripts, which appeared in the series Studies in the History of Chinese Texts at E.J. Brill (Leiden) in January 2013. Among other projects, I am currently working on several chapters for the publication Reading Early Chinese Manuscripts: Texts, Contexts, Methods, ed. Wolfgang Behr, Martin Kern, Dirk Meyer (Handbook of Oriental Studies; Leiden: Brill).

In the course of the research project "Towards a Methodology for the Study of Ancient Chinese Manuscripts," conducted at the University of Hamburg 2002-05, I collected palaeographic and codicological information on several manuscripts from the ca. 300 BCE Chu tomb 1 of Guodian 郭店, as well as a large number of selected characters from the two early 2nd c. BCE silk manuscripts from tomb 3 of Mawangdui 馬王堆 that each contain a version of the Laozi. This information will one day become the basis of a greater manuscript database. Download the character database excel files.

“Towards a Profile of Graphic Variation: On the Distribution of Graphic Variants within the Mawangdui Laozi Manuscripts.” In Methodological Issues in the Study of Early Chinese Manuscripts: Papers from the Second Hamburg Tomb Text Workshop, ed. Matthias Richter, 169-207. Asiatische Studien / Etudes Asiatiques LIX.1 (2005). 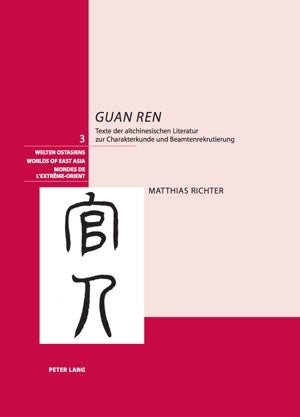