The Text and Its Editor

Francis James Child (Harvard's first professor of English) was a specialist in early English language and literature and wrote and lectured on, for example, the works of Geoffrey Chaucer, Edmund Spenser, and William Shakespeare. Child is best known, though, for his five-volume edition of 305 distinct English and Scottish ballads and their textual variants which he published as The English and Scottish Popular Ballads (1882-1898). Ballad texts for this edition were culled from manuscript and printed materials extant at the end of the 19th Century. Although, during the second half of the 20th Century, the edition was to be criticized as a compilation of texts without music and for Child's reliance on manuscript and printed materials rather than contextualized performances documented through primary field work, The English and Scottish Popular Ballads, nonetheless, was the publication that established the groundwork for English speaking ballad scholarship in the 20th Century and, hence, remains an important historical document.

Cathy Lynn Preston is a Research Associate and Lecturer in the English Department and Honors Program at the University of Colorado in Boulder where she teaches courses in folklore, women's literature, and ethnic literature. She completed her dissertation, The Ballad Tradition and the Making of Meaning, and her Ph. D. in 1986. In addition to essays on ballads ("The Way Stylized Language Means: Pattern Matching in the Child Ballads," Computers in the Humanities 23(1989):323-332), and on folk song, folk speech and jokes (which have appeared, among other places in The Journal of American Folklore and Western Folklore), her major publications include A KWIC Concordance to Jonathan Swift's A Tale of a Tub, The Battle of the Books, and A Discourse Concerning the Mechanical Operation of the Spirit, A Fragment, co-edited with Harold D. Kelling (New York: Garland Publishing, 1984), A KWIC Concordance to Thomas Hardy's Tess of the d'Urbervilles (New York: Garland Publishing, 1989), The Other Print Tradition: Essays on Broadsides, Chapbooks, and Other Ephemera, co-edited with Michael J. Preston (New York: Garland Publishing, 1995), and Folklore, Literature, and Cultural Theory: Collected Essays (New York: Garland Publishing, 1995).

I began working on this concordance to The English and Scottish Popular Ballads in the early 1980's while a graduate student at the University of Colorado, Boulder. At the time I was interested in the function of stylized language, and Michael J. Preston, then director of the Center for Computer Research in the Humanities at the University of Colorado, Boulder, made the Center's facilities available to me, but as is too frequently the case in academia, university funding for the Center was withdrawn before the concordance could be finished and produced in publishable form. Consequently, I moved on to other projects, and the concordance languished in a dusty corner of my study. Occasionally, over the years, I have been asked to retrieve information from the concordance for colleagues, which I have done, and these requests, plus the advent of Internet web sites, has prompted me to make available the concordance (rough as it remains) to those scholars who have argued that a rough concordance to the material is better than no concordance at all. Both the software that produced the original concordance and the programming necessary to get this up on the Web are the work of Samuel S. Coleman.

Note: We discovered, too late, that a section of the original text was missing from the files used to make this concordance. We have inserted this section into the file "original text.txt". It is delimited by lines of dashes, for which you can search, and a note. In addition, this section is encoded using a convention for upper case and other text features that we used in the 1960s (as opposed to the 80s for the rest of the text). Since this project is not active, there are no resources to work on this section.

This is a working or "rough" concordance to Francis James Child's five volume edition of The English and Scottish Popular Ballads (New York: Dover, [1882-1898] 1965). By "rough" I mean that the concordance has only been proofread and corrected once; consequently, occasional typographical errors remain. Furthermore, word entries have not been disambiguated; nor have variant spellings been collated under a single word form. Nonetheless, all 305 texts and their different versions (A, B, C, etc.), as well as Child's additions and corrections to the texts are included in the concordance.

The format for the concordance is that of an extended KWIC (Key Word In Context). Consider the following sample entry, an approximation of what the camera-ready Postscript files look like: 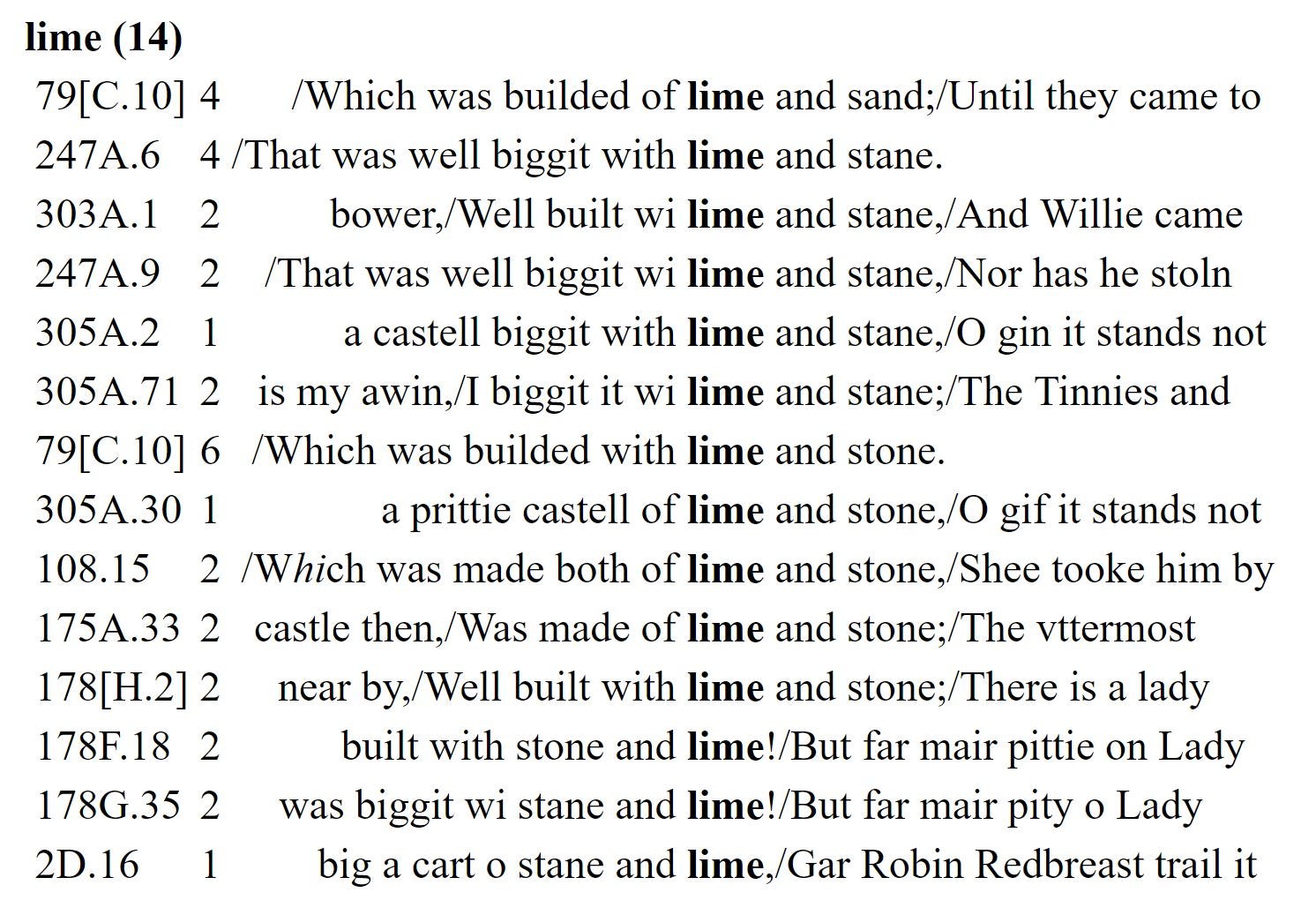 Each word form in the text is listed in strict alphabetical sequence on the left of the column, followed by its number of occurrences in parentheses. Thus the word "lime" appears 14 times in the text. Under "lime" appears references to all of its occurrences, with ballad number and version letter, followed by stanza number, and line number within the stanza. For example, the first entry under the word form "lime" can be found in Child 79, version C, stanza 10, line 4. When a particular entry, as here, comes from Child's additions and corrections, the version letter and stanza number are placed in brackets.

Each occurrence of each word form appears surrounded by as much context as will fill the available space without retaining unaesthetic and potentially misleading word fragments. For example, the machine-defined context for the first entry under "lime" is "/Which was builded of lime and sand;/Until they came to" with the key word "lime" in bold face; virgules indicate end-of-line marks. Though such an abbreviated context is not as useful for certain purposes as a complete syntactic and semantic context might be, it is the abbreviation of the contexts which enables the KWIC format to display particular aspects of stylized language. Because the lines of the text fall directly one under another and because each entry is further ordered by sorting upon what follows the key word rather than in text order, the concordance visually brings together related collocations, phrases, idioms, and commonplaces that are a stylistic trait of the Child ballads. Furthermore, the format emphasizes which phrases are shared by which ballads and in what stanza line they most frequently occur. In short, the format can be quite useful in identifying particular stylized features of ballad structure and language.