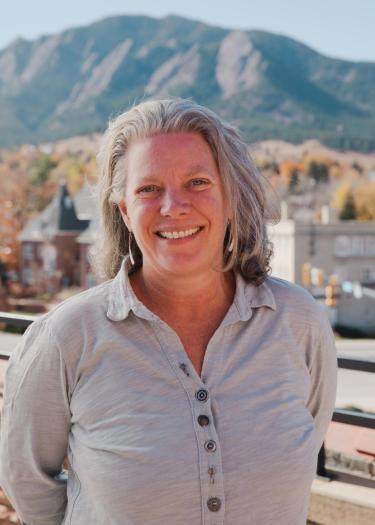 Associate Director • She her hers
Communication
marianne.martin@colorado.edu
(303)492-8308

Marianne Moulton Martin has been with the Environmental Center since 1998. Currently as Associate Director, Marianne is responsible for managing finances, communications, promotions and marketing, and conferences and events. She also works with student staff on campus sustainability initiatives such as sustainable food, reducing toxics and green purchasing. Marianne served a year-long term as Interim Director of the Center in 2005.

Marianne earned a BA in Environmental Conservation, Sociology and Economics in 1995 from CU-Boulder. While a CU student, she was the student director of the Wilderness Study Group and conducted roadless area surveys on the Routt National Forest. She conducted grant-funded research on "The Impacts of Transitioning from Extractive Industries to Tourism-based Economies: Case Studies of Rural Communities in Southwestern Colorado".

Marianne has also been active with conservation organizations such as the Southern Rockies Ecosystem Project and Colorado Wild. She was the Assistant Director of SREP (1995-1998) and served as Treasurer on the SREP Board of Directors until 2004.  SREP is now part of Rocky Mountain Wild.

Marianne is also President of her family's business- Burrell School Vineyards and Winery - in the Santa Cruz Mountains of California. She eventually plans to take on a more active role in the family owned and operated business but in the meantime, Marianne enjoys the seasons of Colorado where she lives with her husband Bill and twin boys.  Interests and activities include cooking, telemark skiing and organic gardening.