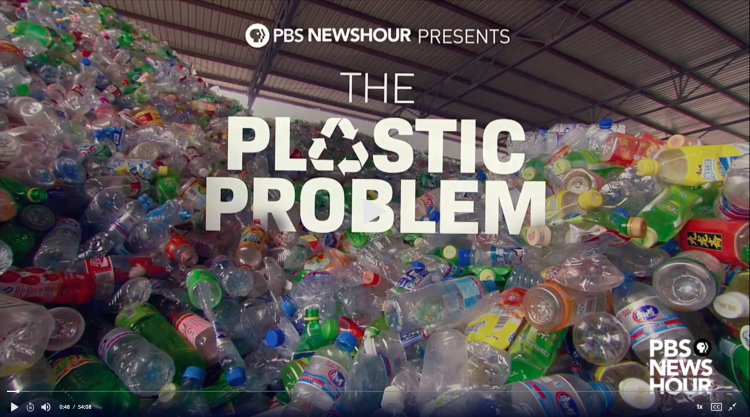 Interested in learning more about the plastic problem and the solutions people around the world are taking to combat it?

“By 2050 there will be more plastic than fish in the oceans. It’s an environmental crisis that’s been in the making for nearly 70 years. Plastic pollution is now considered one of the largest environmental threats facing humans and animals globally.

In “The Plastic Problem: PBS NewsHour Presents”, Amna Nawaz and her PBS NewsHour colleagues look at this now ubiquitous material and how it’s impacting the world, why it’s become so prevalent, what’s being done to mitigate its use, and what potential alternatives or solutions are out there. This hour-long program travels from Boston to Seattle, Costa Rica to Easter Island to bring the global scale of the problem to light.

From an expert on the world’s garbage patches to an industrial ecologist who quantified exactly how much plastic has ever been produced, Nawaz tracks how the world is grappling with plastic. She also sits down with two of the world’s biggest plastic producers — The Coca-Cola Company and Unilever — to find out what they’re doing to address the problem.

Since its widespread use began after World War II — everything from band-aids to parachutes — over 9 billion metric tons of plastic has been created. And because it doesn’t degrade and instead breaks down into smaller and smaller pieces, much of that plastic is still here on earth. The problem is clear: too much plastic. But finding solutions is a murkier proposition.

Recycling for decades has been one of the so-called solutions. Nawaz tries her hand at sorting waste at a recycling facility. But an expert says the way we currently recycle is actually a part of the problem. Much of America’s plastic waste was being sent to China. But now China has shut its doors to plastic waste, which could result by 2030 in more than 100 million tons of trash with nowhere to go. Markets are shifting, prices are tanking and now all that plastic scrap has been diverted to other southeast Asian countries, opening up a host of illegal markets. One of those is Malaysia, where our teams found countless examples of plastic waste from western nations at both legal and illegal recycling or incineration sites.

Bans on plastic have become one attempt at addressing the problem. Seattle is one of the first major American cities to ban single-use plastics. Nawaz visits a compost heap, a noisy and busy recycling facility, the Seattle Mariners ballpark and an iconic Seattle seafood chain — all are playing their part in finding solutions to the plastic problem. Nawaz also meets a young scientist who discovered a bacteria that eats plastic ; a young inventor who has made an alternative to plastic wrap out of the by-products of beer brewing ; a startup making plastic roads ; and a trash can that goes underwater to collect plastic waste. On a smaller scale, she meets a family in Toronto, Canada trying to reduce their plastic footprint by shopping at a new zero-waste grocery store.”