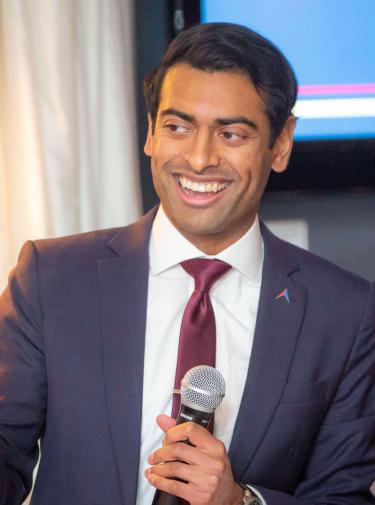 Steven Olikara is a proud Wisconsinite, a nationally-recognized political reformer, and the Founder of the Millennial Action Project (MAP), the largest nonpartisan organization of young elected leaders in the U.S. MAP works with over 2,000 legislators in Congress and state legislatures to build diverse coalitions for real change. MAP’s coalitions have passed forward-thinking legislation on strengthening democracy, clean energy innovation, economic mobility, and gun violence prevention, among other issues.

As a frequent political commentator on national media, Steven has been featured on CNN, MSNBC, NPR, NBC News, theWashington Post, USA Today, and many other news outlets. In 2018, Steven testified before the U.S. House Committee on Small Business on new legislation to protect workers in the gig economy. When the pandemic threatened the 2020 elections, he successfully advocated for safe voting reforms as a leader in the Vote Safe Wisconsin Coalition.

An avid musician, he is co-author of the book, JFK: THE LAST SPEECH, on the role of artists in democracy. Steven also hosts the Meeting in Middle America podcast and is the subject of the new documentary film, The Reunited States. Previously, Steven advised two multi-platinum recording artists on youth empowerment and sustainable energy initiatives, including Akon Lighting Africa which electrified over 1 million homes in Africa with solar power.

Steven found his path to public service through music. Growing up in the Greater Milwaukee area, he played in multiple bands and became a DJ for a community-focused radio station—through these experiences, he discovered the power of bringing diverse people together to create positive change.

Steven has been named a Global Shaper by the World Economic Forum and a Forbes 30 Under 30 in Law & Policy in 2017. He is an enthusiastic fan of the Wisconsin Badgers, graduating from the University of Wisconsin-Madison as a Udall and Truman Scholar. Steven serves on numerous Boards and Commissions focused on advancing human rights, democracy, national service, and the performing arts.