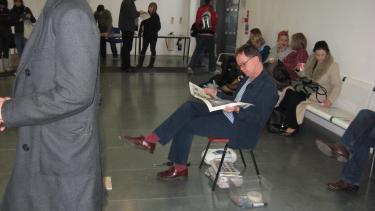 In 1991 Michael become the first person in the UK to receive an MA in Theatre Design, which became the catalyst for a teaching career alongside continuing professional practice. For fifteen years Michael was responsible for leading what was the BA Theatre Design course at Central Saint Martins in London into an expanded field embracing the idea of the designer as auteur. He went on to run the MA Performance Design & Practice course for a further six years.

His art practice, like his teaching, reflects the shift in the role of designer. Highlights includes: a site specific ‘Attempts On Her Life’ (Martin Crimp) featuring the simultaneous presentation of the 17 scenes in a disused gas facilities building in Colorado Springs, a devised solo performance triptych, Variation, Verification & Vindication and a performing role within his own design for ‘The Anatomy of Integers & Permutations’ (Andrew and Jennifer Granville), a text based on a mathematical theory, performed at both Princeton and Berkeley. His practice provokes questions surrounding the definition of performance in works such as p e r f o r m 2 4 1 1 1 5 (London) and p e f o r m 2 3 0 6 1 9 (Prague) where people passing through a public space were given the option to perform through the intervention of chairs suggesting a silent auditorium. He also recently completed Transformation Exchange, a residency in Granary Square, London, attempting to connect those regularly inhabiting a newly created public space to the rapid changes taking place.

Now semi-retired, his recent work is based around improvisation for wellbeing, most notably for participants who are over 65 years old. He is currently director of the Southwark Playhouse Elders Company in London. Michael has presented at USITT conferences, spoken at two previous CWA conferences, represented the UK at the OISTAT symposiums, written various articles for the Society of British Theatre Designers journal, ‘Blue Pages’ and attended the last five Prague Quadrennials, co-curating the UK schools exhibit on three occasions and creating a unique series of student workshops.