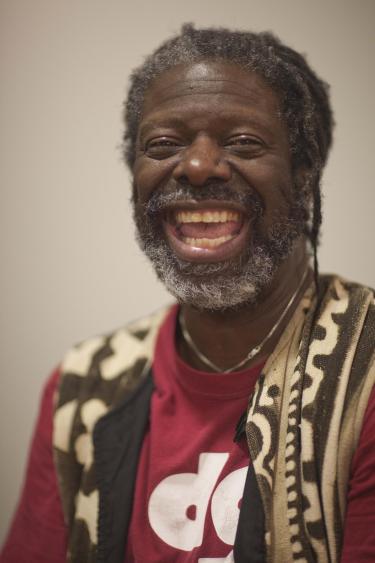 Michael D. “Mac” McCarty was born in 1950 in Chicago. As a young man, he attended St. Ignatius College Prep, where he started a Black Student Union and was subsequently expelled for his involvement in protests. In 1968, he joined the Black Panther Party as part of the education cadre. He left the party after the assassination of Fred Hampton. He joined the Army in 1972 to avoid being a target of the FBI. After leaving the military, he became an acupuncturist.

In 1992 he discovered the world of professional storytelling, and he has been telling stories and teaching storytelling around the country and around the world ever since. He specializes in stories of African and African-American history and culture, as well as multicultural stories. Since 2014 he has worked in California prisons as part of the Arts In Corrections program, teaching inmates to find, develop and tell their stories.

In 2019 McCarty was the subject of the award-winning film, "The Story of Michael D. McCarty: A Belonging in the USA Documentary" which shares the life journey of McCarty who even in the face of great obstacles spreads joy wherever he goes. The film follows Michael as he evolves from aspiring scientist to Black Panther Party member, from FBI target to soldier, from drug addict to health nut. The twists and turns of Michael’s life will fill you with hope, laughter and a living example of resilience.  ​