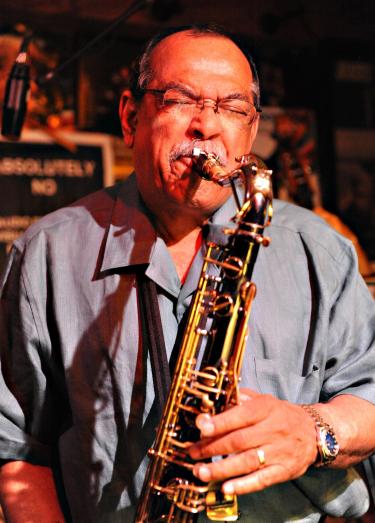 Two-time Grammy Award winner Ernie Watts first picked up a saxophone over sixty years ago, at 13.  At 14 he first heard John Coltrane, and his course in music was set.  While learning classical saxophone, he taught himself jazz by ear, and won a scholarship to the Berklee College of Music in Boston.  When there he was asked to join Buddy Rich’s band, and began his professional career at 20.

In 1968 he moved to LA, recording in the studios for film, TV, and music. He played on over 500 recordings ranging from Cannonball Adderley to Frank Zappa, and films like The Color Purple, always with his unforgettable trademark sound.  When chosen by Charlie Haden’s Quartet West in 1985, Watts began a return to live jazz as his primary work.  He tours extensively with his own quartets in the US and EU, as a feature artist, and with college and university groups.

He and his wife Patricia began Flying Dolphin Records in 2004, for creative control of his music.  In 2014, he received the prestigious Frankfurt Music Prize, one of only 6 winners in 30 years to be jazz players.  In 2017, he was Guest of Honor at the Telluride Music Festival.  Based in California, he is rarely home, but shares his jazz sound worldwide.  (COVID-19 has kept him home since March 2020, but slowly work is returning now, in April 2021.)  He is healthy at 75, and filled with joy in music.

“He is one of the greatest living tenor saxophonists, not only at the top of his game, but the top of the game.” Ian Patterson, All About Jazz