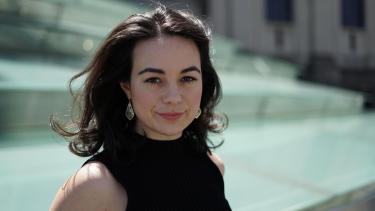 Elena Gaby is an award-winning director and producer, known for her expertise in documentary film-making. In 2019, she made her feature-length directorial debut with the sci-fi documentary, I AM HUMAN, co-directed by Taryn Southern, which follows three of the world’s first cyborgs as they receive brain-computer interfaces. The film premiered at the Tribeca Film Festival and received numerous awards and praise from Wired, The Verge, People, CBS News, The Big Think and Forbes.

As a producer, Gaby has collaborated with directors such as Emmy winner Judd Ehrlich and Oscar nominee Morgan Spurlock. Her television credits include Showtime's Seven Deadly Sins, CNN's The Hunt, with John Walsh, and CNN's Inside Man.

Her unique identities as a tri-lingual, first generation Brazilian-American, native Nantucket Islander and proud New Yorker  all come together to inform her craft. While studying film at Vassar College, she embedded with four undocumented teenagers as they navigated the path to college. This work became her first short film, which won Best Student Documentary at the Cannes Film Festival.