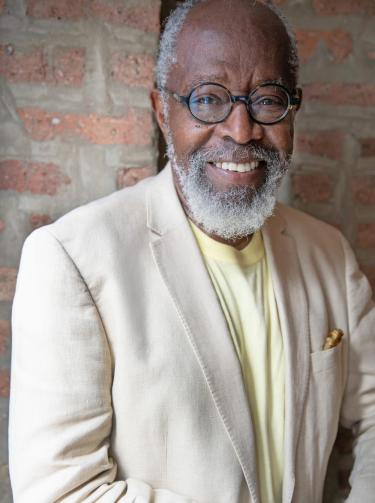 Ed Roberson is the author of twelve books of poetry, most recently MPH and Other Road Poems (Verge Books, 2021) and Asked What Has Changed (Wesleyan University Press, 2021). A former special programs administrator at Rutgers University’s Cook Campus, Roberson has lived in Chicago since 2004 and is an emeritus professor in Northwestern University’s MFA creative writing program.

He has also held posts at the University of Chicago, Columbia College, the University of California, Berkeley, and the Cave Canem retreat for black writers. His honors include the Jackson Poetry Prize, the Shelley Memorial Award, the Ruth Lilly Poetry Prize, the Lila Wallace-Reader’s Digest Writers’ Award, and the African American Literature and Culture Association’s Stephen Henderson Critics Award.

Born and raised in Pittsburgh, Roberson has worked as a limnologist’s assistant (conducting research on inland and coastal fresh water systems in Alaska’s Aleutian Islands and in Bermuda), as a diver for the Pittsburgh Aquazoo, in an advertising graphics agency, and in the Pittsburgh steel mills.